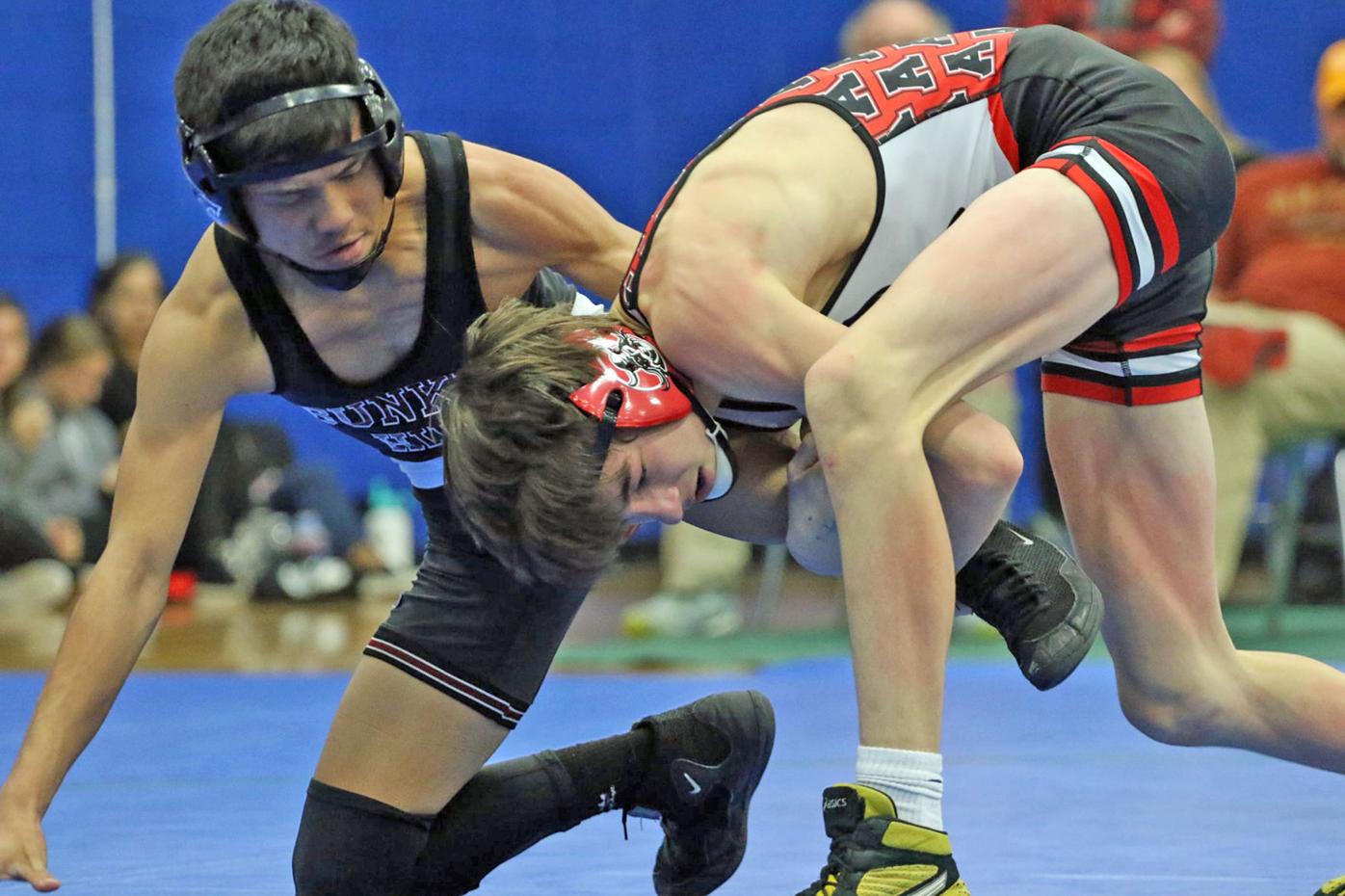 Ben Jordan advanced to the quarterfinals of the Holy Angels Tournament in the competitive 113-pound weight class. 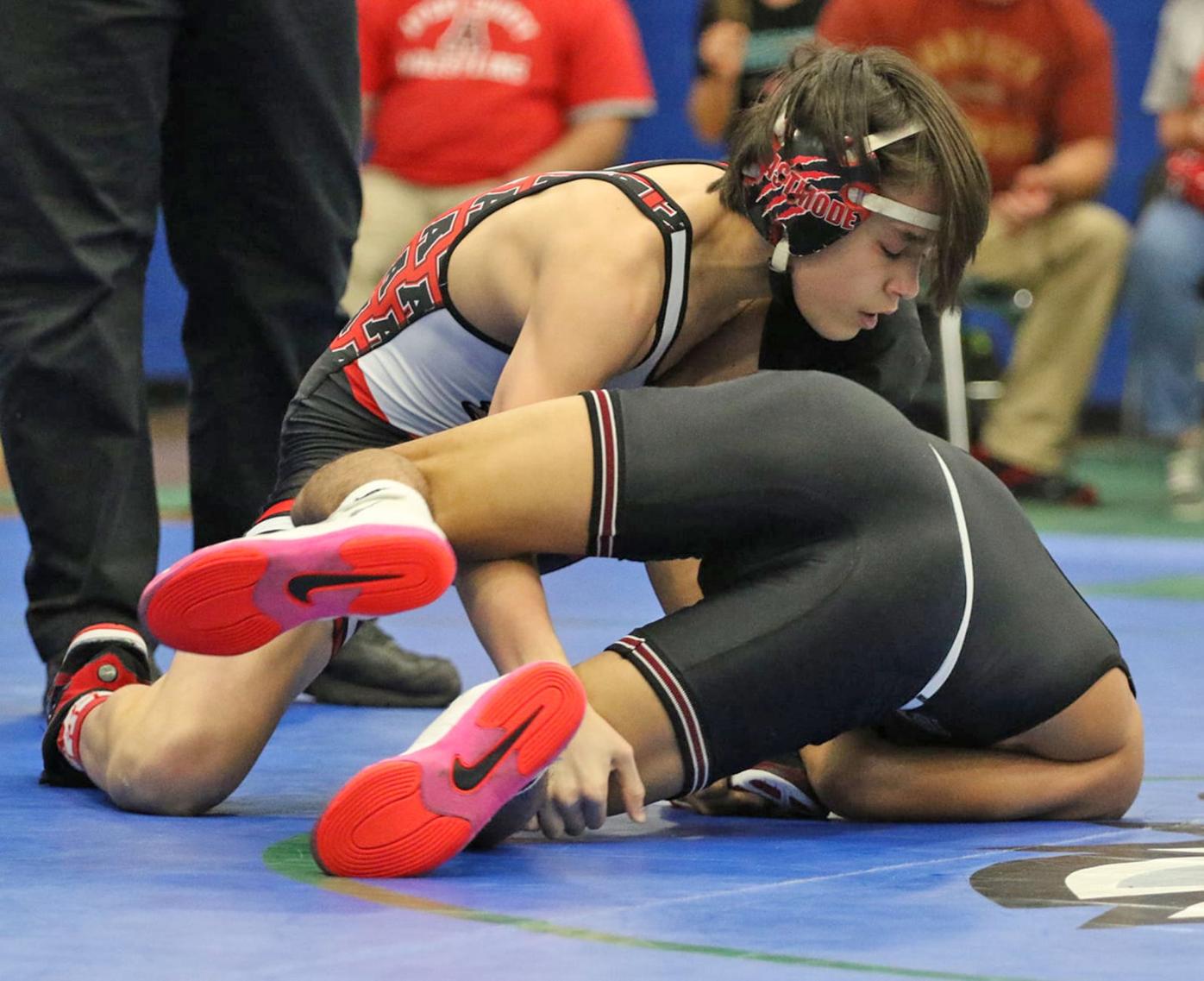 Ben Jordan advanced to the quarterfinals of the Holy Angels Tournament in the competitive 113-pound weight class.

CHARLOTTE — Avery wrestlers spent some of their break between semesters in the company of 135 other schools on Dec. 27 and 28 at the Holy Angels Invitational at Bojangles Coliseum, while members of the Viking JV wrestling team wrestled at the JV Holy Angels event on Dec. 29 and 30.

During the varsity tournament, seven Vikings entered the tournament with championship aspirations. In the 106-pound weight class, Cooper Foster received a first-round bye, then proceeded to win his next two matches, a round two victory by pinfall in 2:36 against Hickory Ridge’s Connor Susa, and a 10-0 major decision win in the third round over Surry Central’s Xavier Salazar.

In the quarterfinal round, Foster met a difficult foe in the top seed, Piedmont’s Noah Cauble, with Cauble victorious by 10-4 decision. In the consolation bracket, Foster continued to do damage by quickly returning to his winning ways, defeating Weddington’s Alex King by fall in 4:08, followed by a win by fall in 4:23 over Parkwood’s Kyle Simpson. In the consolation semifinal round, Foster was a winner by 7-1 decision against Mooresville’s Calvin Nguyen. In the third-place match, Foster met Cauble in a rematch, with Cauble again emerging victorious by a 9-0 major decision, giving Foster, a freshman, a fourth-place overall finish.

In the 113-pound tournament, Avery’s Ben Jordan earned a bye in the opening two rounds of bracket competition. Jordan picked up a win in the third round by fall in 3:07 over Landstown (Va.) wrestler Hayato Otero. In the quarterfinal round, however, Jordan battled North Gaston junior Caleb Haynes, who won by 13-3 major decision. Jordan dropped to the consolation bracket, where he met Charlotte Catholic junior Joseph Baisley, coming up on the short end of a tight 2-0 decision loss.

Avery’s Kenneth Pritz entered the tournament at 120 pounds, where he received a first-round bye. In the second round, Prits downed Hoke County’s Jaylen Bethea by 14-0 major decision. In the third round of the championship, Pritz was knocked off by sixth-seeded Northwestern wrestler Corey Dye by a 7-5 decision.

Entering into the consolation bracket, Pritz rebounded with a win by fall in 2:59 over Mallard Creek opponent Travis Foxx, then earned a narrow 4-3 decision victory against Myers Park’s Jaylen Purvis. In consolation round six, Prits was defeated by a 2-0 decision against eighth-seeded South Caldwell wrestler Jonah McBurney.

Avery sophomore Grant Reece, the third seed in the tournament, earned a fourth-place podium finish for the Big Red. Reece received byes through the opening two rounds in the 126-pound tournament. In the third round, Reece battled Northwestern’s Josh Popov, emerging victorious by fall in 5:22. In the championship quarterfinals, Reece downed No. 6-seeded opponent Hunter Jones of Hickory Ridge by an 8-7 decision. In the championship semis, Reece met Providence’s Noah Luna, with Luna, the No. 2 seed, earning a 5-0 decision victory.

Reece won his consolation semifinal match over fourth-seed, Mt. Pleasant’s David McEachern, by pinfall in 60 seconds to advance to the third-place match. In that matchup, Cardinal Gibbons opponent Hunter Guidry, the No. 5 seed, proved too strong to overcome, as Reece clinched fourth place with a 7-4 Guidry decision win.

At the 138-pound tournament, Avery defending 1A state champion and top tournament seed Ethan Shell took on a tough slate of competitors. Shell earned a first-round bye, then won by fall in 1:10 in round two against Northern Guilford’s Parker Peters. Shell advanced to the quarterfinals with a 5-2 decision win over Jaylon Pemberton of Hickory Ridge High School.

In the quarterfinal round, Shell suffered a rare setback, as he forfeited his quarterfinal match against ninth-seed, Lake Norman’s JT Richards, as well as forfeited the consolation round to Lumberton’s Matthew Foil.

Seth Blackledge represented the Vikings as a No. 2 seed in the 170-pound tournament. After receiving a first-round bye, Blackledge won over Southern Guilford’s Zane Means by fall in 1:22. Blackledge, a defending state champion, earned a win by fall in 32 seconds in his third-round match over Riverside’s Wesley Shepard.

In the quarterfinal round, Blackledge was unable to overcome opponent Tomas Brooker of Hickory Ridge, falling by 6-2 decision to the seventh seeded Brooker. Blackledge returned to the mat and was victorious in consolation round six, picking up an 8-5 decision win against Staunton River’s Joshua Kelly. Blackledge then lost by forfeit in his seventh-round consolation match to third-seeded Doug Bowles of Uwharrie Charter Academy.

“We continued to have injury issues and had to pull both Ethan and Seth to protect them for February,” Dunn added.

Avery senior and three-time defending 1A state champion Levi Andrews rounded out the Vikings varsity competitors at the Holy Angels, earning the highest individual finish with a third-place performance in the 285-pound weight class. The top seed of the tournament, Andrews earned both a first- and second-round bye before pinning Purnell Sweat opponent Asa Locklear in 1:13 in round three. In the quarterfinals, Andrews won by fall in 49 seconds against the ninth-seed, North Davidson’s Tevin Gray.

Andrews suffered a rare defeat, as 4A Jack Britt’s Amarie Daniels, the No. 12 seed, was victorious by fall in 2:59. In the consolation semifinals, Andrews roared back with a win over No. 6 seed, Robbinsville’s Carlos Wesley, by fall in 2:52. In the third-place match, Andrews defeated No. 2-seeded foe Cody Hardy of Parkwood by 5-2 decision.

Bentley finished the competition as a champion. After earning a first-round bye, Bentley won his first match by 6-5 decision over Jose Ruiz of Deep Creek. Bentley continued his win streak with a 4-0 decision win over Elijah Robinson of Metrolina Christian Academy, and rounded out the championship performance with a victory in his final match, a 3-1 decision victory over Aaron Lumpkin of Hickory Ridge.

Gragg received a first-round bye, then won his first match in the quarterfinals, earning a win by fall in 3:00 over Cox Mill’s Jacob Coyle. Gragg came up short by a 6-3 decision against Metrolina Christian Academy’s Ngus Ward. In the consolation semifinal round, Gragg bounced back with a 6-1 decision victory against South Rowan’s Pedro Rhodes. In the third-place match, Gragg battled but came up short by 6-3 decision to opponent Tyler Ward of Stuart Cramer High School.

“We took only five kids to the varsity event and took fifth place in team standings in one of the largest tournaments in the Southeast. We placed ahead of all other 1A, 2A and 3A North Carolina teams,” Dunn noted. “We open conference play next week and we hope to have everyone back in the lineup soon for the push for February.”