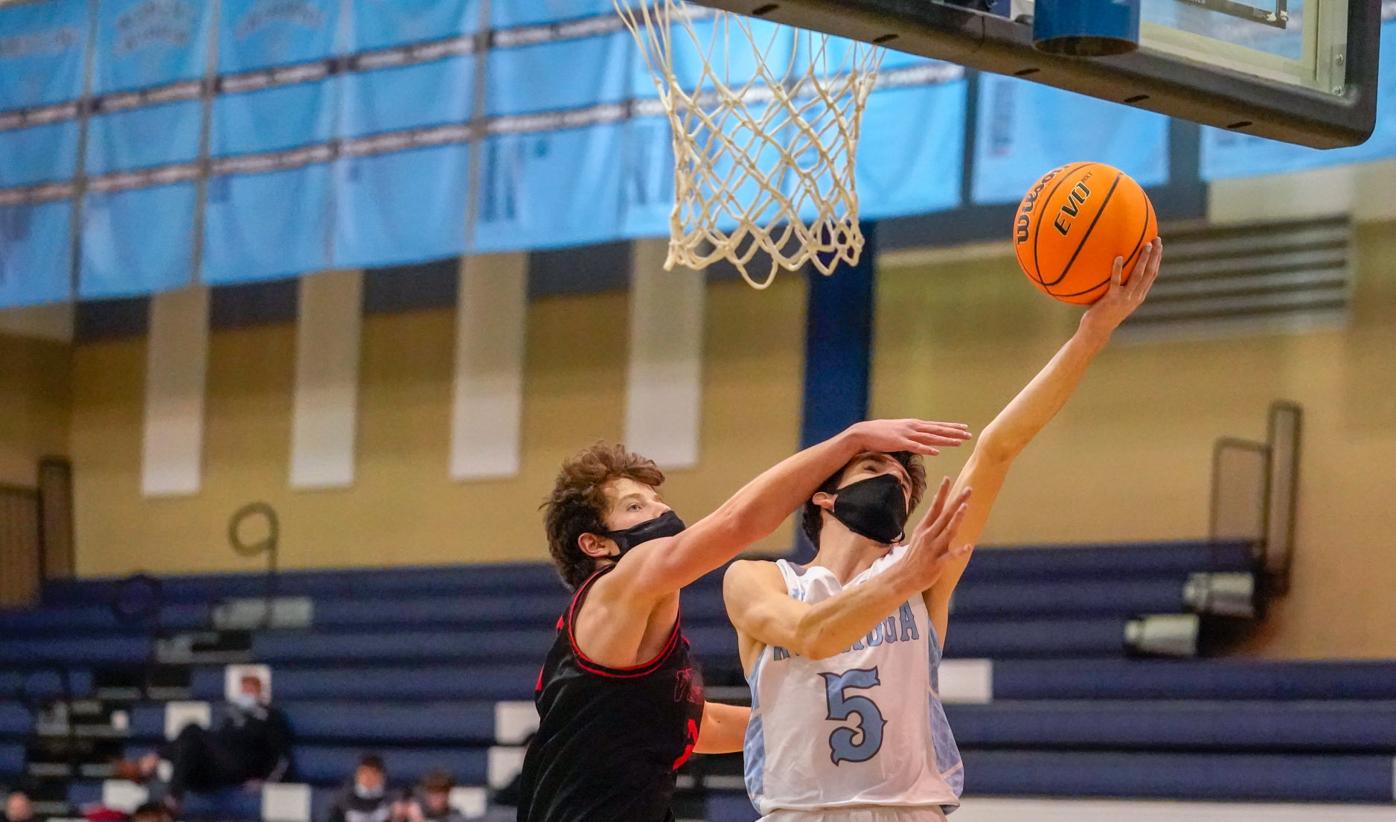 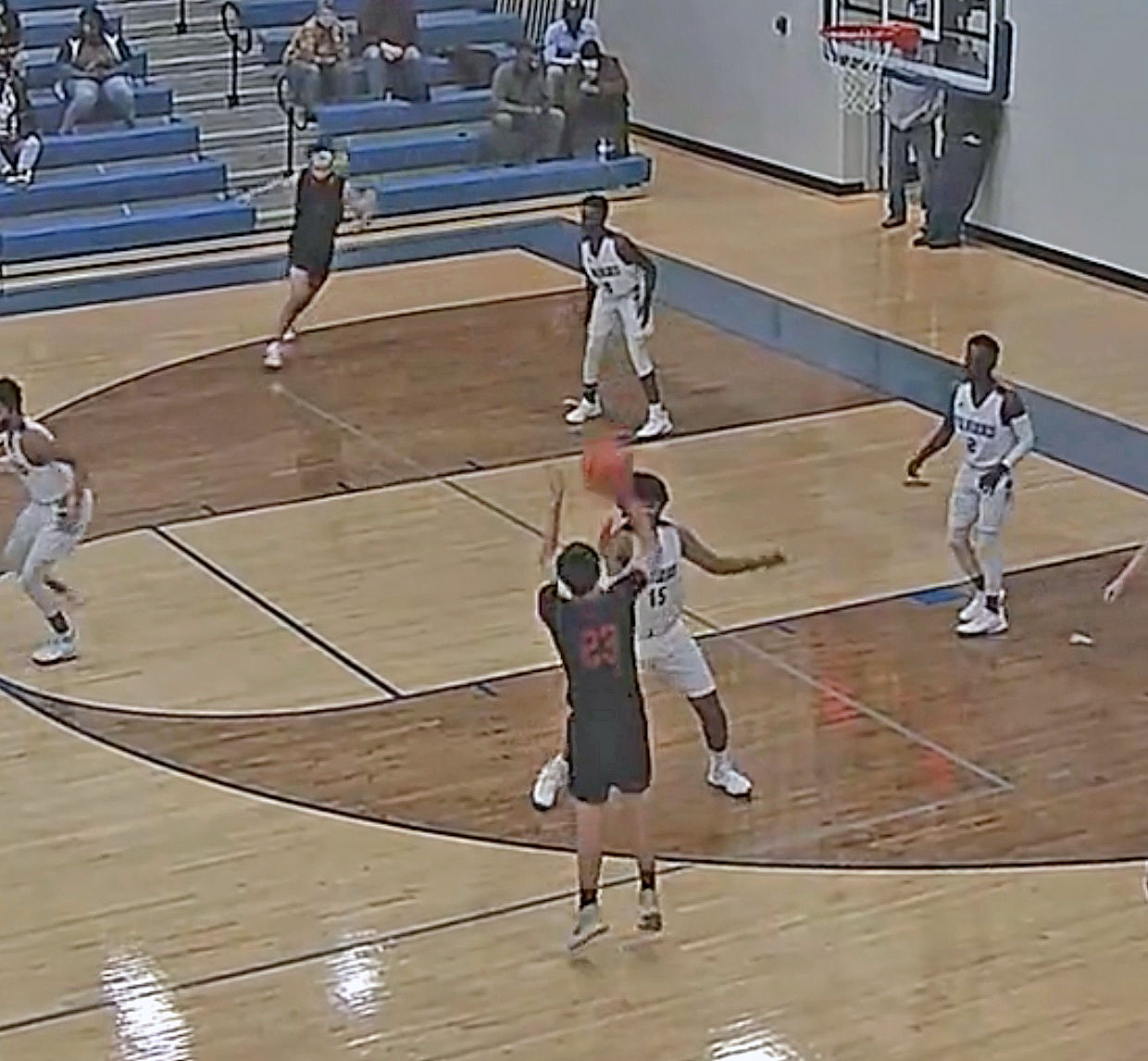 Avery High School varsity boys basketball logged many miles on the activity bus last week, as the squad made three separate road trips for contests at Watauga, Owen and Polk County, respectively. The journeys were not kind to the Big Red, as the Vikings suffered defeats in each contest by sizable margins.

BOONE — A rivalry game between two High Country boys basketball teams served as a confidence builder for the previously 1-7 Pioneers as Watauga dominated Avery County, 79-39, at Lentz-Eggers Gym on Feb. 8.

For a moment, it looked like any kind of domination would be by the visiting Vikings, who jumped out to an early 11-2 to open the contest. The Pioneers regrouped and rallied, however, to close the first quarter with a 16-5 run to take an 18-16 lead after one quarter of play.

Using that momentum, the Pioneers erupted with a 25-7 second-period scoring barrage that sent Avery into the locker room at intermission dealing with the wrong end of a 43-23 deficit.

As the second half ensued, Avery struggled to manage maintaining the basketball against a hard-pressing Pioneers defense that forced multiple turnovers, as Watauga took advantage in transition with fast break after fast break. When Watauga upped the tempo, Avery did as well, but the Vikings struggled to take care of the ball, as ball-handling errors and passing troubles continued to haunt the club.

For the Pioneers, the most impressive part of the team’s performance turned out to be its bench production, as the substitutes were able to continue the success of the WHS press defense and transition offense.

Logan Gilliam led the Big Red in scoring and was the lone Viking in double figures with 14 points. Teammate Troy Hoilman added nine points, with six from Jack Crenshaw.

Watauga’s Bennett Ricker led all scorers with 16 points on the night, followed by Grant Morrison also reaching double figures with 10.

SWANNANOA — An outage occurred during the Avery/Owen varsity boys basketball game, but it had nothing to do with the electricity, as both teams struggled mightily to light up the scoreboard for much of the Western Highlands Conference tilt between the schools. The Vikings managed only five made baskets for the entire game and mustered only 20 points for the night. Owen fared little better thanks to the efforts of the Avery defense, however, as a fourth-quarter surge fueled the Warhorses’ gallop to victory.

Avery was held scoreless for the opening 4:48 of the first period before a Silas Barinowski three-pointer broke the ice. That, along with a Logan Gilliam free throw, accounted for the Vikings’ total scoring in the opening period. The Big Red defense limited the Warhorses to single baskets from the trio of Daniel Averett, Dequan Boyce and Hunter Inabinett, with Owen holding a 6-4 lead after one quarter.

The contest remained close through the remainder of the first half. Trent Whitelock and Jack Crenshaw each drained three-point shots in the frame, while teammate Troy Hoilman chipped in with a basket in the second period. The Vikings continued to hold Owen in check on its home floor for the half, as Avery entered the locker room at halftime trailing by only two points at 15-13.

For the final two quarters, the Vikings offense could not find its way to build any positive momentum, although defensively the team managed to keep within striking distance after three quarters. AHS mustered only three free throws for the period, with Owen outscoring Avery 13-3 for the frame to up its lead to double digits at 28-16.

The Warhorses pulled away from the visiting Vikings in the final quarter, led on its Senior Night by senior Dequan Boyce, who scored seven points in the final stanza and a game-high 14 points for the game. A Troy Hoilman field goal at the 3:30 mark was Avery’s final points for the contest, with Owen closing the matchup with a 10-0 scoring run to earn the win.

Hoilman led Avery with seven points, with four points each from Barinowski and Whitelock, and three from Crenshaw. Inabinett was the only other player in double figures for OHS with 11.

COLUMBUS — A little more than 12 hours after the conclusion of its road game at Owen, Avery returned to the bus for an even longer road trip to Polk County High School to face the Wolverines. The Vikings almost matched its scoring output from the previous night’s game during the first quarter alone, but a decisive second-quarter outburst by the Wolverines placed Avery into a 20-plus-point deficit from which it could not rally.

The duo of Barinowski and James Harris shouldered the bulk of the offensive end of the burden for the Big Red in the opening period, as the pair scored 11 of Avery’s 15 points in the frame. Polk, meanwhile, responded with a balanced effort offensively, with three separate players knocking down three-point shots and six players total in the scoring column as the Wolverines led 18-15 after eight minutes of play.

As the second quarter got under way, the scoring drought that plagued the Vikings the previous evening again reared its head at an inopportune time. Shots would not fall through the cylinder for the visitors, while the Polk defense also amped up its pressure to frustrate the Avery attack. AHS managed only seven points for the remainder of the half, a three-point basket from Whitelock, and field goals from Crenshaw and Hoilman, while Polk exploded for a 26-point period, closing the final six minutes of the half on a 20-4 run, including three buckets off the bench from Chan Barber, 12 first-half points from Dominique Carson and five points from Tyler Staley in the stanza to push PCHS to a 44-22 halftime lead.

The scrappy Vikings attempted to mount a comeback as Whitelock sank a pair of three-pointers early in the third quarter, but Polk maintained and stretched its lead with balanced play on both ends of the floor. Polk led 62-32 after three quarters, and despite Avery doubling Polk’s offensive output in the final eight minutes, the Wolverines cruised to the win.

Whitelock was the only Avery player to net double figures in the game with 11 points. Barinowski chipped in with nine points, with eight from Harris, six from Hoilman and five from Gilliam. Dominique Carson paced Polk with 14 points, with 13 from Staley and 10 points from Wesley Royster.

Avery (0-12, 0-9 WHC) wrapped up its regular season schedule this week by hosting Mitchel for Senior Night at Viking Gym on February 15.