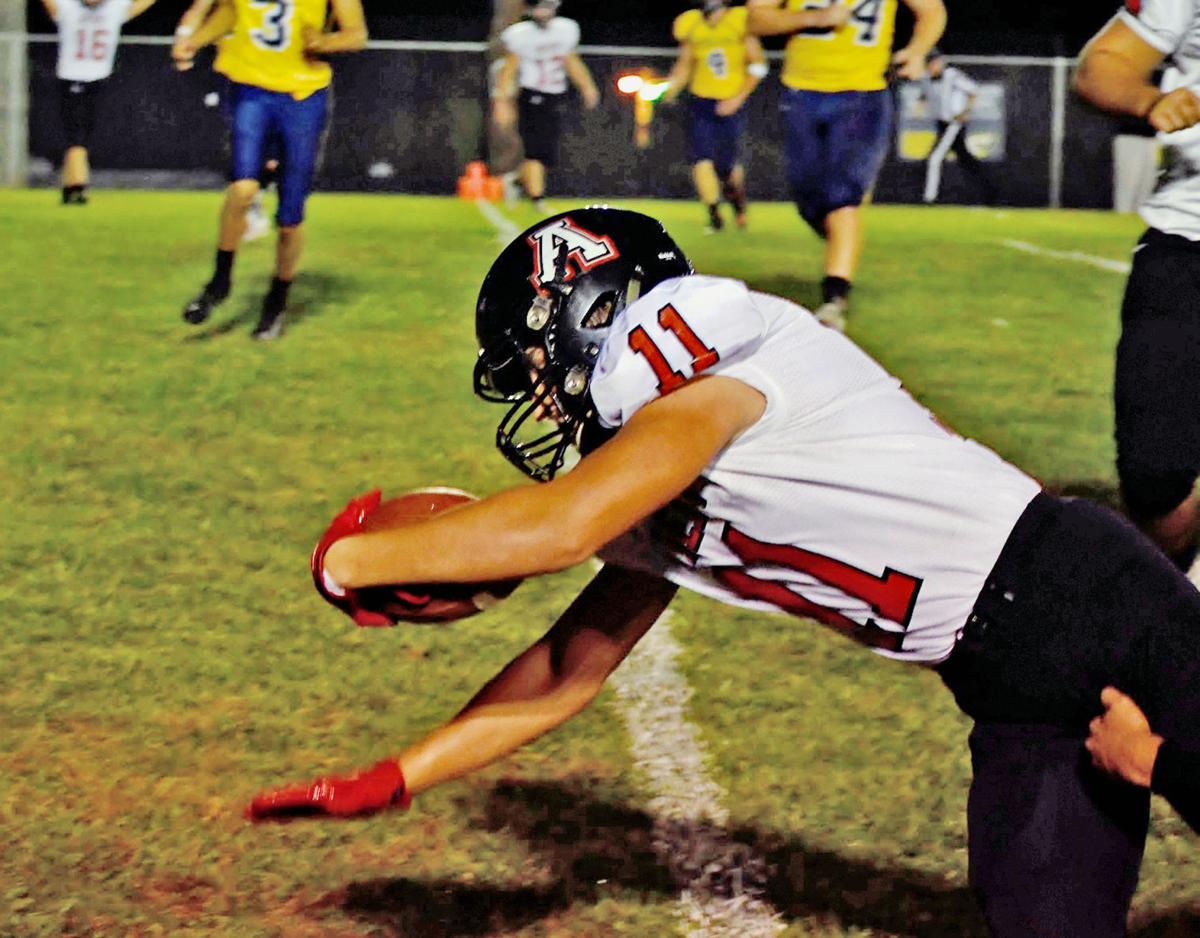 Avery wide receiver Ty Smith stretches across the goal line for a touchdown in a Viking victory over Cloudland on Sept. 27. The Big Red opens conference play this week by welcoming Mountain Heritage to MacDonald Stadium. 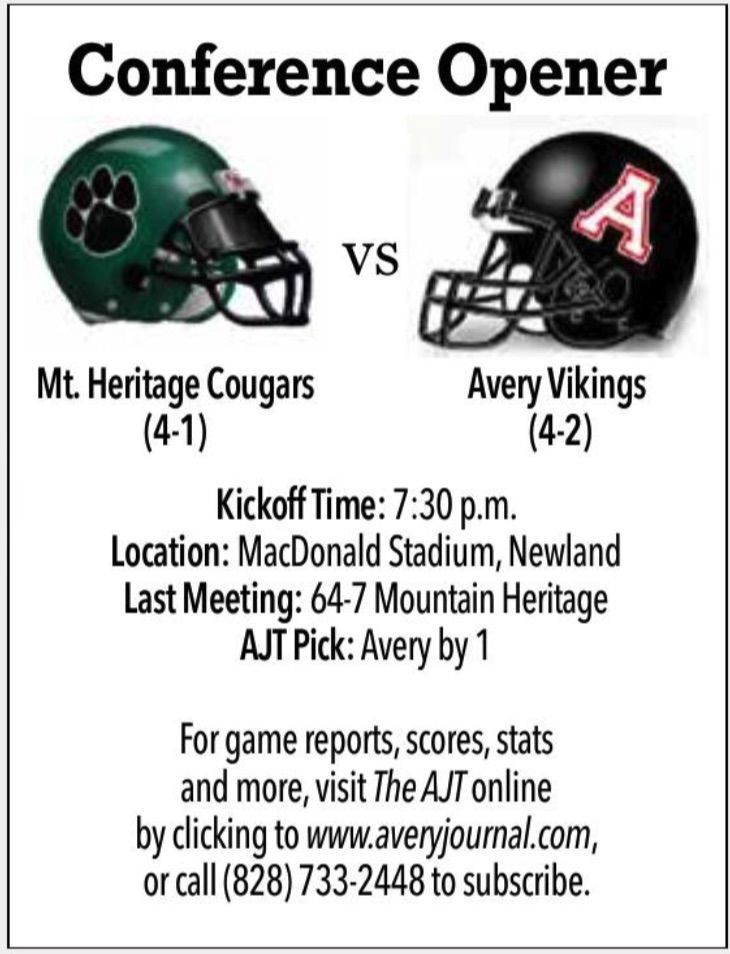 Avery wide receiver Ty Smith stretches across the goal line for a touchdown in a Viking victory over Cloudland on Sept. 27. The Big Red opens conference play this week by welcoming Mountain Heritage to MacDonald Stadium.

NEWLAND — With four wins in its first six contests, the Avery Vikings (4-2) are off to the squad’s best start since 2011, a season that saw the Big Red qualify for the state playoffs and finish with six victories.

This year’s team has loftier goals, including contending for a Western Highlands Conference championship. Thanks to a schedule shift, that road meets an imposing hurdle early in the conference season, as defending conference champion Mountain Heritage rolls into MacDonald Stadium this week with four wins of its own this season.

Both clubs had a bye week to prepare for one another this week. Avery is coming off a strong second half that propelled the club to a 42-16 win over neighboring Cloudland (Tenn.) in the Vikings’ final non-conference tune-up on Sept. 27, while Mountain Heritage fell short in a 9-0 loss at state-ranked Pisgah that same evening, a game which saw the Cougars offense held to less than 200 rushing yards for the first time in 2019.

Mountain Heritage has defeated Avery seven consecutive times, with Avery last winning over the Cougars in 2011. The Cougars routed Avery 64-7 in Burnsville a season ago to close out the 2018 regular season. The all-time series between the schools is tied at 19-19 overall.

The Mountain Heritage Cougars are coached by Joey Robinson, who is in the midst of his 19th season in Burnsville. Robinson is 118-97 overall, and led the Cougars to an unbeaten conference record and WHC championship in 2018. MHHS finished 11-2 last season, falling to Reidsville 21-14 in the third round of last season’s state playoffs.

Heritage employs a Spread Wing-T offense and will primarily utilize a 3-5 defensive formation. As the 2019 season began, the Cougars welcomed back 10 returning starters, four on offense and six on defense. Among the returning players whose key contributions continue for this season’s squad is quarterback Callin Randolph. Randolph threw for 1,143 yards and 18 touchdowns last season, to go with 497 rushing yards and 10 touchdowns in 2018. This season, the senior has thrown for 368 yards on 19-of-55 passing with four touchdowns.

Another player who has stepped up offensively is senior Cole Shehan. Shehan leads the team in rushing with 373 yards on 59 carries with a touchdown, averaging 74.6 yards per contest. Three additional Cougars, senior Mikey Riddle (46 carries, 190 yards, 2 TD), Kason Hall (31 carries, 193 yards, 3 TD) and Daniel Westall (23 carries, 147 yards, 3 TD) have all helped to shoulder the burden of the Heritage rushing attack. Shehan has also emerged as the team’s leading receiver thus far in 2019, as he has caught 11 passes for 230 yards and all four of the touchdowns thrown by quarterback Randolph.

Defensively, the Cougars are paced by reigning Western Highlands Conference Defensive Player of the Year London Neill, who registered 137 tackles last season, including 15 tackles for loss in 2018. Neill has 42 tackles in just four games for Heritage, good for third highest on the club. Leading MHHS is senior outside linebacker Bailey Johnson, who has 57 tackles (11.4 per game) and a team-high nine tackles for loss this season. Junior linebacker Kason Hall has 56 tackles through five contests and leads the club with 26 solo tackles. Shehan (40 tackles), Logan Higgins (36 tackles), Joe Webb (33 tackles) and Grady Brooks (33 tackles) round out the team’s leading defensive playmakers during the non-conference schedule in 2019. Johnson leads the team with three quarterback sacks this season.

The 2019 edition of the Avery Vikings have shown flashes of brilliance at times during the first six games of the regular season. With an improved defense and potent offense, the Big Red has put up impressive numbers during the non-conference portion of its schedule. The true test for the team begins this week when it lines up against the team that has been one of the most dominant schools in the region over the past decade of play.

For the Vikings to avenge last season’s blowout loss and to give themselves the best opportunity to win this week, the Avery defense must continue to show the same tenacity stopping the running game as it did in the second half of its last contest at Cloudland, as well as in games earlier this season with West and North Wilkes. Mountain Heritage can throw the football when it needs to do so, but the Cougars have made its mark running the football behind an experienced offensive line.

Avery took advantage of an undermanned ‘Landers squad in its last outing, but will need to bring its A game in order to earn victory on The Mountain this week. AHS quarterback Troy Hoilman, who is among the state leaders in passing yards and touchdowns despite having last week off, will need to be precise in the passing game, as well as make some plays with his legs, in order to keep the Cougars defense off balance. Receivers will need to be sure-handed and make the plays when they are available, and the offensive line would do well to open holes for the likes of Lucas Andrews, Dalton Towe and the Viking running game.

Shehan and Randolph have been the offensive spark plugs for the Cougars through much of the season. Being able to limit their productivity this week will be a key component in starting the conference season on a positive note.

33 — receptions this season by Avery WRs Chad Giarrusso and Smith in 2019. Lucas Andrews is close behind with 30 receptions

38.5 — points per game scored by the Vikings through six games this season

77 — passing yards by Troy Hoilman in last year’s loss to the Cougars in Burnsville. Hoilman is averaging 278 yards per game with 25 touchdowns in 2019

266 — yards in total offense gained by Avery in its most-recent outing against Cloudland (102 rushing, 164 passing)

Read next week’s edition of The AJT for a recap of this week’s game against Mountain Heritage, as well as a preview of next week’s contest at Madison.

Analysis: Ranking the intrigue of each game on Wyoming's schedule