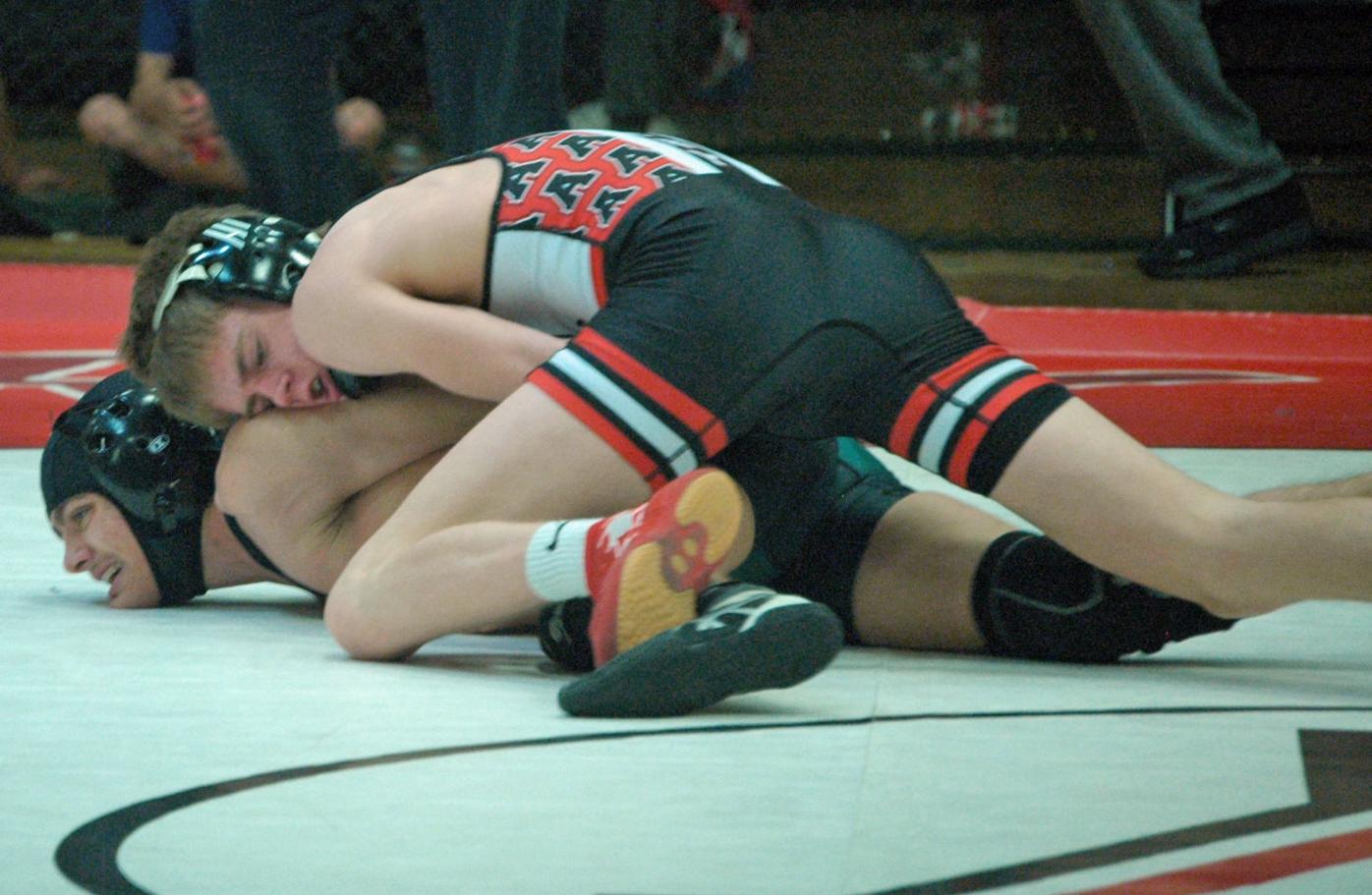 Grappler Grant Reece was one of 11 Western Highlands Conference champions and 12 All-WHC performers from the Avery wrestling team following the WHC Tournament on June 10 at Madison High School. 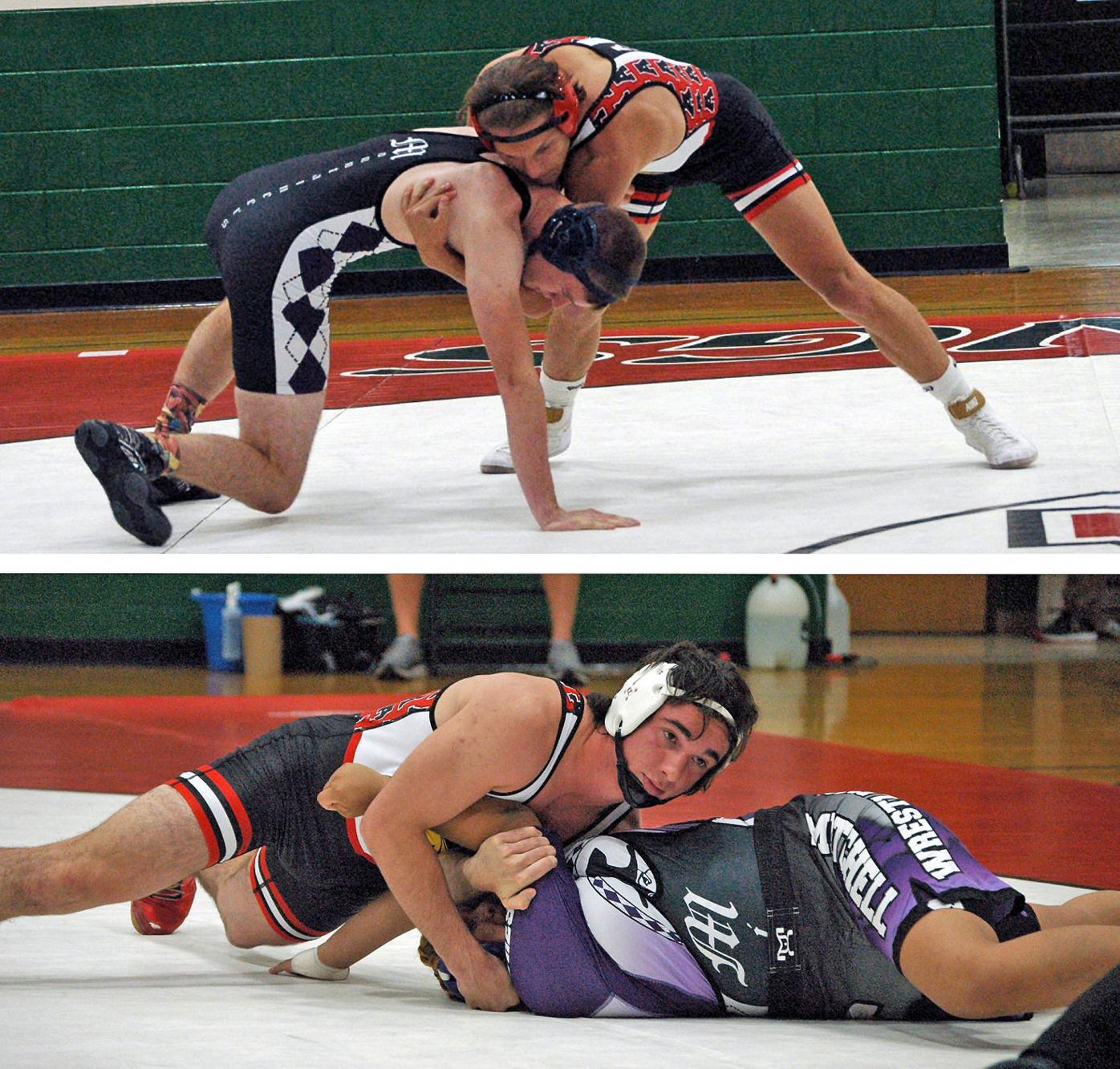 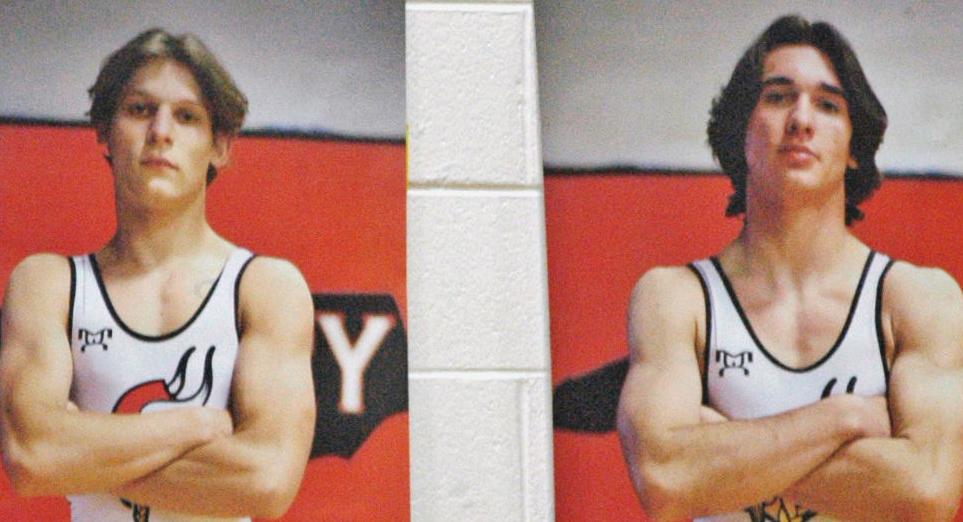 Grappler Grant Reece was one of 11 Western Highlands Conference champions and 12 All-WHC performers from the Avery wrestling team following the WHC Tournament on June 10 at Madison High School.

CRANBERRY — Avery High School Wrestling honored a pair of senior grapplers during its regular season home dual finale against Mitchell High School on June 8 at Cranberry Middle School Gymnasium. Vikings senior wrestlers Jonah Hayes and Dalton Towe were recognized with their respective families midway through the dual, which saw the Big Red cap a 20-0 regular season record as a team with a 72-12 match win over the Mountaineers.

Francisco Turja opened the scoring for the Vikings in the first bout, winning by first period pinfall over Mitchell’s Halley Wheeler at 106 pounds. At 113 pounds, Ben Jordan was a winner by forfeit, while Mitchell’s Shilo Brandt was victorious by forfeit at 120 pounds.

Grant Reece picked up a win by forfeit for Avery at 126 pounds, as teammate Ethan Shell capture a win by pinfall in 51 seconds over Mitchell opponent Adrian Mores at 132 pounds.

Senior Hayes earned a pinfall win in his final regular season home appearance, winning in 1:30 in front of the home crowd over Mitchell foe Carson Phillips at 138 pounds. At 145 pounds, Avery’s Johnathan Cable won by pinfall in 28 seconds over Mountaineer opponent Savannah Pollard, with teammate Tristan Adams winning by pinfall in 60 seconds over Mitchell’s Serenity Sobolefski at 152 pounds.

Both Avery wrestlers Bradley Parker (160 pounds) and Seth Blackledge (170 pounds) won by forfeit in their respective bouts, and Avery senior Towe came away a winner in his final regular season match in a Viking uniform, upending Mitchell opponent Allison Queriapa by pinfall in 56 seconds at 182 pounds.

Mitchell earned its only competition win at 195 pounds, as Mountaineer Camron Cook earned a win in 1:30 over Avery’s Dakota Hoilman. Viking Zach Vance was victorious by forfeit at 220 pounds, while Viking Levi Andrews won by first period pinfall over MHS opponent Justice Sobolefski.

“I thought Mitchell did a great job of putting out everybody they had, man or woman, and they went out and wrestled, and I was so proud of them. I told them how proud I was of their ability and willingness to wrestle us,” Vikings interim head coach Hank Hardin said following the win. “A lot of teams don’t want to wrestle us or take a loss, and Mitchell wanted to wrestle, which is how you build back a program. Mitchell is historically an unbelievably strong program. It was good for them to come and show up. We also were able to match up with everybody we could possibly match up for exhibition bouts, and we just want mat time. We have kids wrestling two-a-days, and they just want to wrestle and practice and see what they need to work on. Even though the match didn’t last a long time, at least we got the thrill of getting ready to wrestle and wrestling.”

The dual preserved the Vikings’ unbeaten team record leading into the conference tournament at Madison on June 10, pushing momentum ahead to the upcoming 1A Western Regional on Tuesday, June 15, at Robbinsville High School.

“We have high expectations for the conference, and we’re going to get ready for the regional at Robbinsville and that’s a big deal,” Hardin added. “This team is hungry for matches and are upset when they don’t get matches, and our goals are always to win conference, then win regionals, then win state. That’s our goal both as individuals and as a team. In this strange Covid year and wrestling in summer, a lot of teams are not full and are sliding out, and we’re just getting stronger and developing this mental toughness.”

Hardin shared thoughts on the team’s pair of seniors, Hayes and Towe, and their significance to the program.

“I knew Jonah for a long time through Dogtown Wrestling, and I’d work with him and Waylon Griffith, all the staff we’ve had through the years. I’ve watched him develop and become better at his style, which looks really good. I’m really thinking that he is going to win a state championship after taking third last year. He’s primed and ready to go,” Hardin said. “I’ve been watching Dalton from the stands and saw him come into the program later, and he’s such an athlete. He has this mental toughness that you can’t buy. He has really become a very good wrestler. He did it in a shorter time than most of our kids, who have been wrestling longer and were in Dogtown. He came in and learned from them and learned the technique and positioning. He is truly a well-rounded athlete and is a pleasure to watch in the room and coach. Both these wrestlers are fine young men and it’s a pleasure to be around the kind of people that Jonah and Dalton are.”

Following this week’s regional tournament, Avery will have 10 days before states, where the team will work to maintain its intensity and preparation for the wrestlers’ most crucial tournament of the season.

“We are peaking and are looking great. Our takedowns and footwork are dominant. You want to qualify for the state tournament, and if you don’t peak, you don’t get there. After regionals, we have 10 days where we’re able to go off and wrestle other competition, other teams and other qualifiers,” Harden explained. “We’ll go do whatever we have to do to find the competition we need to get even more peaked for the state. Our goal is to win another state championship, and you do that by having as many good individuals as you can. This coaching staff has done a tremendous job with working with each individual and individual personality and body type, and the staff at Avery has done a fantastic job with getting each kid ready to peak. This is going to be a record-setting team if things come together.”

MARSHALL — In a fashion typical of most outings during this spring season, the Vikings wrestling team took care of business at the Western Highlands Conference Tournament on Thursday, June 10, as 11 different Avery wrestlers claimed conference championships and 12 total wrestlers qualified for this week’s Western Regional 1A Tournament.

Avery lapped the field in the team competition, as the Big Red amassed 250 team points in the conference tournament, with Polk County a distant second place with 110 points. Mountain Heritage placed third with 86 points, with Madison (85), Mitchell (82) and Owen (49) rounding out the field.

In individual tournament competition, Francisco Turja captured a WHC championship at 106 pounds, as he pinned Polk’s Tori Strickland in the semifinals and also pinned Mitchell’s Haley Wheeler in the finals.

“I loved that Francisco, who had never been to a tournament and was a No. 2 seed, had to beat the best wrestler who was a defending conference champion from Polk in the semis, then he has the Mitchell girl, and went out and won the match in a dominant fashion like he went out there and knew what he was doing. It was a really good and wonderful thing to see him in his first tournament win it. We’ll need that from him at the regional to qualify for the state tournament, to win a couple of matches,” Hardin said.

Ben Jordan took top honors at 113 pounds, as he received byes into the championship final, where he pinned opponent Shilo Brandt from Mitchell in 16 seconds to claim the bracket.

“The only wrestler that really had to wrestle a great match against a quality opponent whom he wrestled really well was Grant,” Hardin explained. “He defeated the Owen kid who had an 18-1 record. I knew Grant could beat him in my mind, and he just had to go out there and do it, and it was a close match. Grabowski is a really good kid, and did everything he was supposed to do to try to win, and Grant just outwrestled him in a good tough match,” Hardin said.

At the 126-pound weight class,Wilson Wilson placed fourth, while at the 195-pound class Dakota Hoilman finished in fourth place. Johnathan Cable was upset in the semifinals at 145 pounds, but bounced back, however, to capture third place with a first-period pinfall win.

Ethan Shell received a quarterfinal bye, then pinned opponents from Mitchell and Mountain Heritage for a conference title at 132 pounds. Senior teammate Jonah Hayes won by fall in his semifinal match, then shut out Polk’s Collier Foster 5-0 in the finals at 138 pounds.

Bradley Parker received a bye in the 160-pound bracket quarterfinals, then defeated Polk’s Logan Rhodes by fall in 10 seconds in the semifinals before defeating Madison’s Kyle Jamerson by first-period fall in the championship round. Seth Blackledge earned a pair of wins for his conference title at 170 pounds, while Dalton Towe (182 pounds) won by fall in both his matches to get to the top of the podium.

Zach Vance received a double bye in the 220-pound weight class, then defeated Owen’s Galdamez Jenrri by second-period pinfall, while Levi Andrews won the conference championship at 285 pounds with a semifinal pin of Owen’s Connor Miller, and a pin in 22 seconds in his championship match over Madison’s Mason Clubb.

“We had to wrestle some full six-minute matches, and it’s good to be able to see what we can work on so we can refine our technique to get ready for the big event in regions, where you have to do well to get to the state tournament,” Harden said of the team’s effort. “We have to be peaked enough to be able to qualify for states, then we have 10 days to work on individual techniques. We’re not in great, great shape because we haven’t been able to wrestle those six-minute full matches against tough kids, and that’s hard to say in a newspaper. But other teams are in the same boat, going in wrestling dual meets and people forfeiting because of summertime and Covid.”

Hardin emphasized the importance of this week’s regional event in setting the team up for success and its ultimate goals.

“You can work really hard in the room and practice and drill, but it’s not the same as being in an actual match,” Hardin added. “We needed some matches to try to get in match shape, so that we can go into this regional tournament in a little bit better condition. But we have to be smart and condition for only a day or two, then we’ve got to lighten up so that we’re not burned out and used up all our energy for the regionals.”

Avery competed at Robbinsville High School on June 15 for the 1A Western Regional Tournament, and qualifying wrestlers will compete at the NCHSAA 1A Wrestling Championships at Glenn High School in Winston-Salem on Saturday, June 26.

Ex-Husker Prince Amukamara signs with Saints, gears up for NFL season No. 11

For Packers lineman Billy Turner, being ready for anything — and any position — is the name of the game