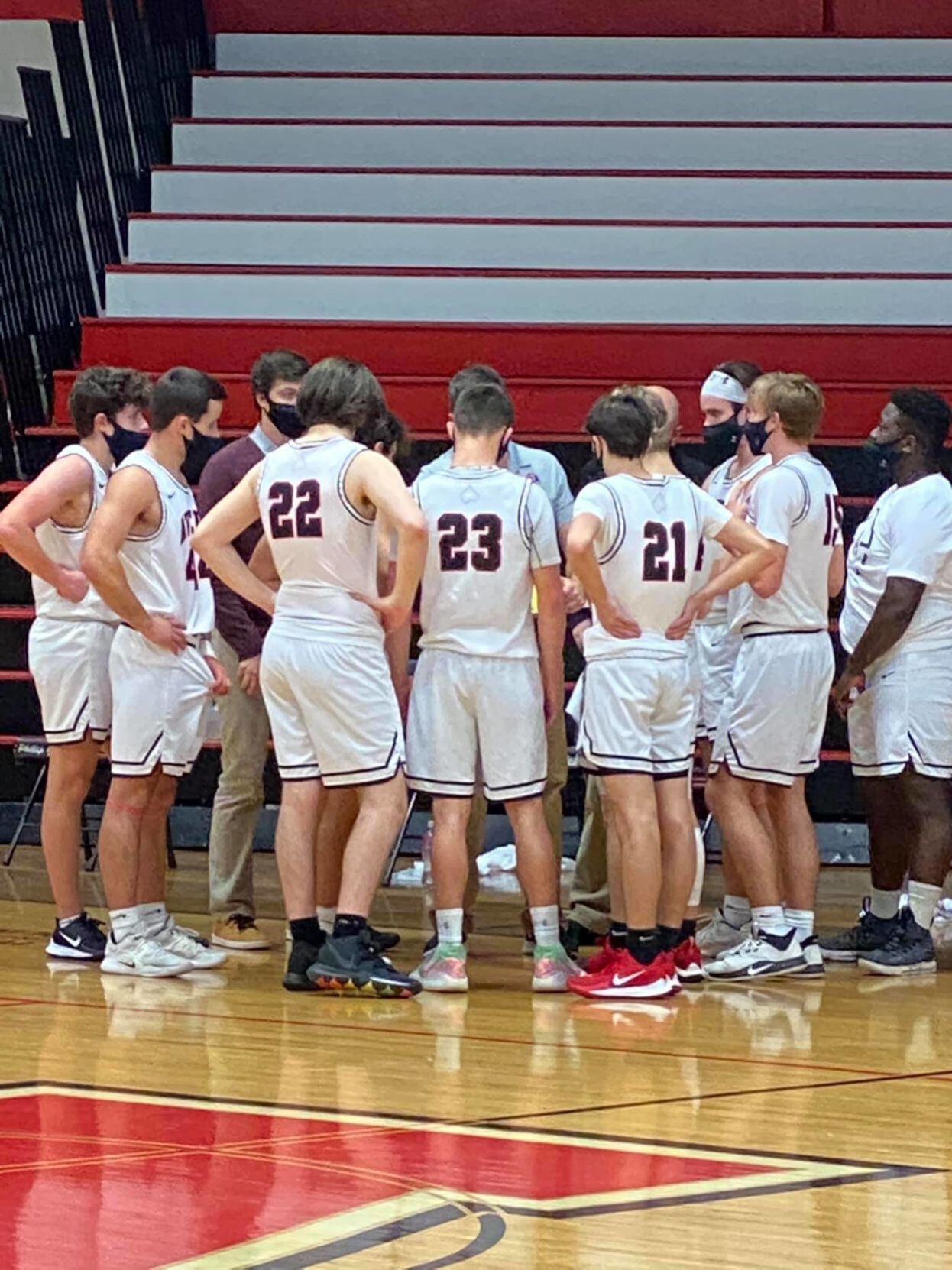 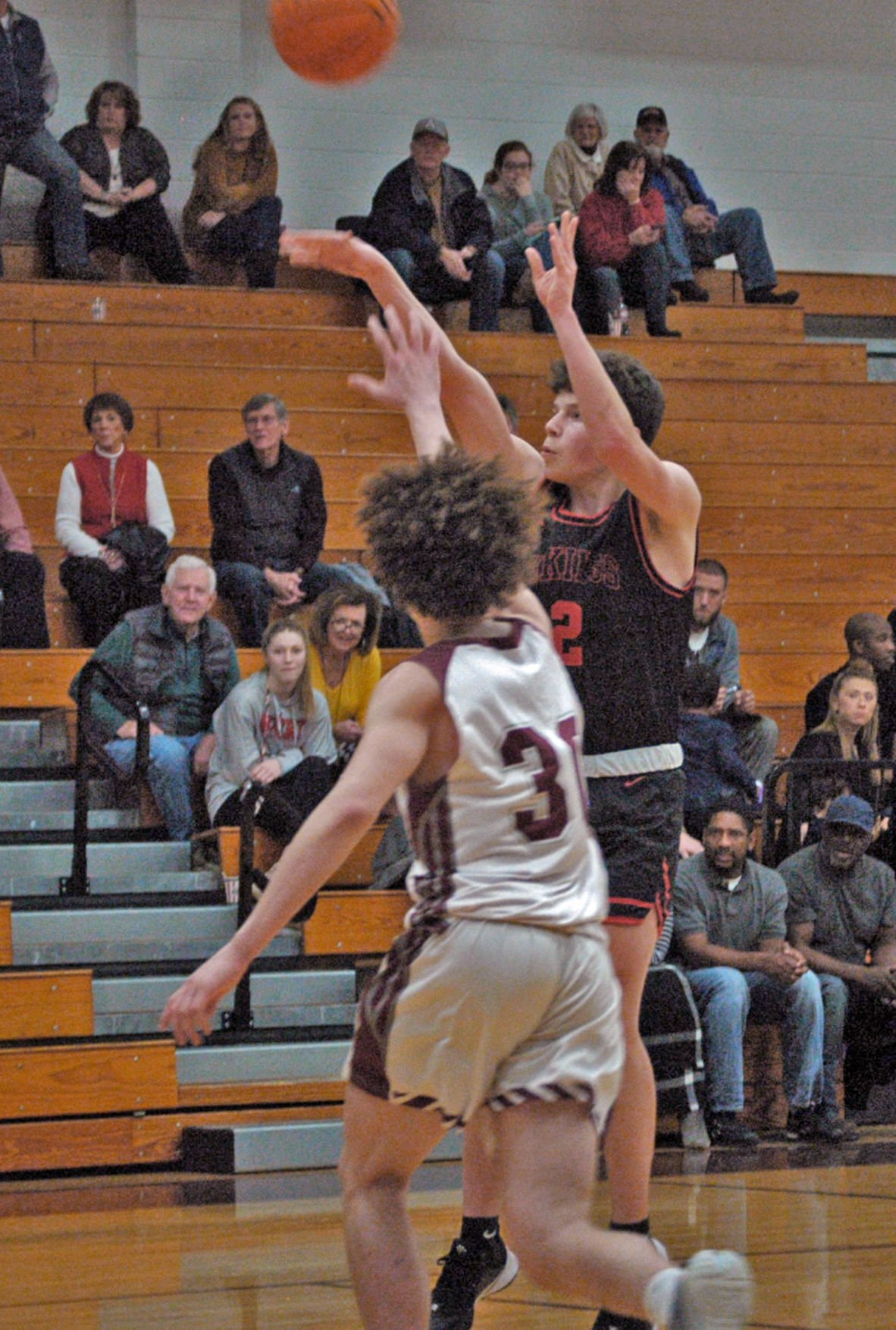 Avery High School boys basketball was finally able to open its 2020 season last week, as the regular-season schedule afforded the Vikings a pair of matchups against the Eagles from East Henderson High School.

NEWLAND — Opening the season at Viking Gym on January 4, the junior varsity boys first took the floor, with EHHS overcoming a Viking halftime lead to earn a 52-37 win. In the matchup, Avery built an early 17-9 edge after one quarter and held a 26-20 advantage after two quarters.

In the second half, the East JVs found its shooting touch with a 17-point third quarter, keyed by six points from Casey Merrit and the second of three 3-point baskets by teammate Cole Gordon. Avery managed just three points in the third quarter, a Landon Hughes basket and a free throw from teammate Elijah Holtsclaw, as East held a 37-29 lead after three periods, holding on with a 5-of-6 foul-shooting effort to hold the Vikings at bay to secure the win.

Mason B. led the Avery scoring charge as the team’s only player scoring in double figures with 11 points. Hughes added nine points, while Holtsclaw chipped in with eight points for the Vikings.

In the varsity boys contest, East received an offensive boost from senior Alex Taylor, who poured in nine of the Eagles’ 12 first-quarter points to take a 12-8 lead after eight minutes of play. Avery remained close with a pair of three-pointers in the period, one each from Silas Barinowski and Trent Whitelock.

The teams played evenly on the scoreboard for the second quarter. Taylor continued to pace East with seven points in the quarter and 17 for the half, while Avery mustered 10 points in the frame. Troy Hoilman scored a pair of baskets in the quarter, with a second three-pointer for the half from Barinowski and a trifecta from James Harris that kept the Big Red within six points at the half at 24-18.

In the third quarter, Avery’s Logan Gilliam heated up from the perimeter, as he drained four 3-pointers in the stanza as part of a 14-point performance in the period. A Whitelock three-pointer and a basket from David McCollum accounted for the remaining points from the Vikings entering the final eight minutes.

East, meanwhile, continued its reliance on Taylor, who scored three points in the third period, while getting some help from his supporting cast of Adams (eight points) and Angelo Syverson (four points) and a three-pointer from Brent Burleson in the period which guided East to a 44-37 lead entering the final frame.

Avery sought to cut into the East lead as Gilliam hit a fifth 3-pointer as part of a team-high 20-point effort, and Barinowski added a pair of baskets to reach double figures in the game. The difference proved to be the tandem of Taylor, who scored six of his game-high 26 points in the period, and Parker Summey, who came to life with nine points in the final quarter, to help the Eagles soar to the 11-point win.

“I’m proud of my guys. We pulled close in the third period, but East made some big threes and came up with loose balls that made the difference,” Avery head coach Cody Frady said.

FLAT ROCK — The varsity boys rematch between East and Avery was moved ahead of schedule to Thursday, Jan. 7, due to a pending snowstorm forecast for the original Friday contest date.

At the onset of the contest, the only thing colder than the winter temperature was the shooting touch of both clubs. The teams combined to make only one basket, an Alex Taylor field goal, over the course of the first three minutes of play. A Troy Hoilman runner in the lane scored Avery’s first points of the contest at the 5:03 mark of the first period which seemed to take the lid off the basket on both ends of the floor.

Taylor scored seven points in the opening stanza for the Eagles, while Avery countered with a pair of Barinowski baskets and baskets from Gilliam and Hoilman, as East held a 15-10 lead after eight minutes of action.

In the second quarter, East forced the Vikings into a number of turnovers on the Avery offensive end, and managed to stretch out its lead, using a 10-4 scoring run in the opening four minutes of the period to build a double-digit advantage at 25-14. The Vikings managed to keep within striking distance in the half, however, as Barinowski connected on a three-pointer as part of an 11-point first half performance. James Harris added a pair of free throws and Gilliam netted five points for the half, but Taylor’s 17 first-half points for the Eagles spotted East a 32-23 halftime lead.

Refusing to fold, Avery came out and played inspired basketball in the opening minutes of the third quarter, pushing tempo and driving to the basket to score baskets or draw fouls. A 7-0 scoring spurt pulled the Vikings to within three at 35-32 with three minutes left in the stanza.

East took control of the contest for good during the early fourth quarter. A pair of three-pointers from Burleson and four points from Taylor helped extend the Eagle lead to 55-40 midway through the quarter and gave the club the advantage to hold on for the 15-point win.

Barinowski paced Avery with 22 points, with eight points each from Harris and Gilliam, while Hoilman chipped in with seven points.

East’s Taylor led all scorers with 24 points, with 16 points from Burleson.

“The guys are positive and continue to work very hard,” Frady said after the game. “We’re excited to get into conference play.”

Turnover time: How the Huskers go about replacing Wan'Dale Robinson, Dedrick Mills and veterans up front

NFC title game will be rematch with Buccaneers — and Aaron Rodgers vs. Tom Brady — but this time at Lambeau Field