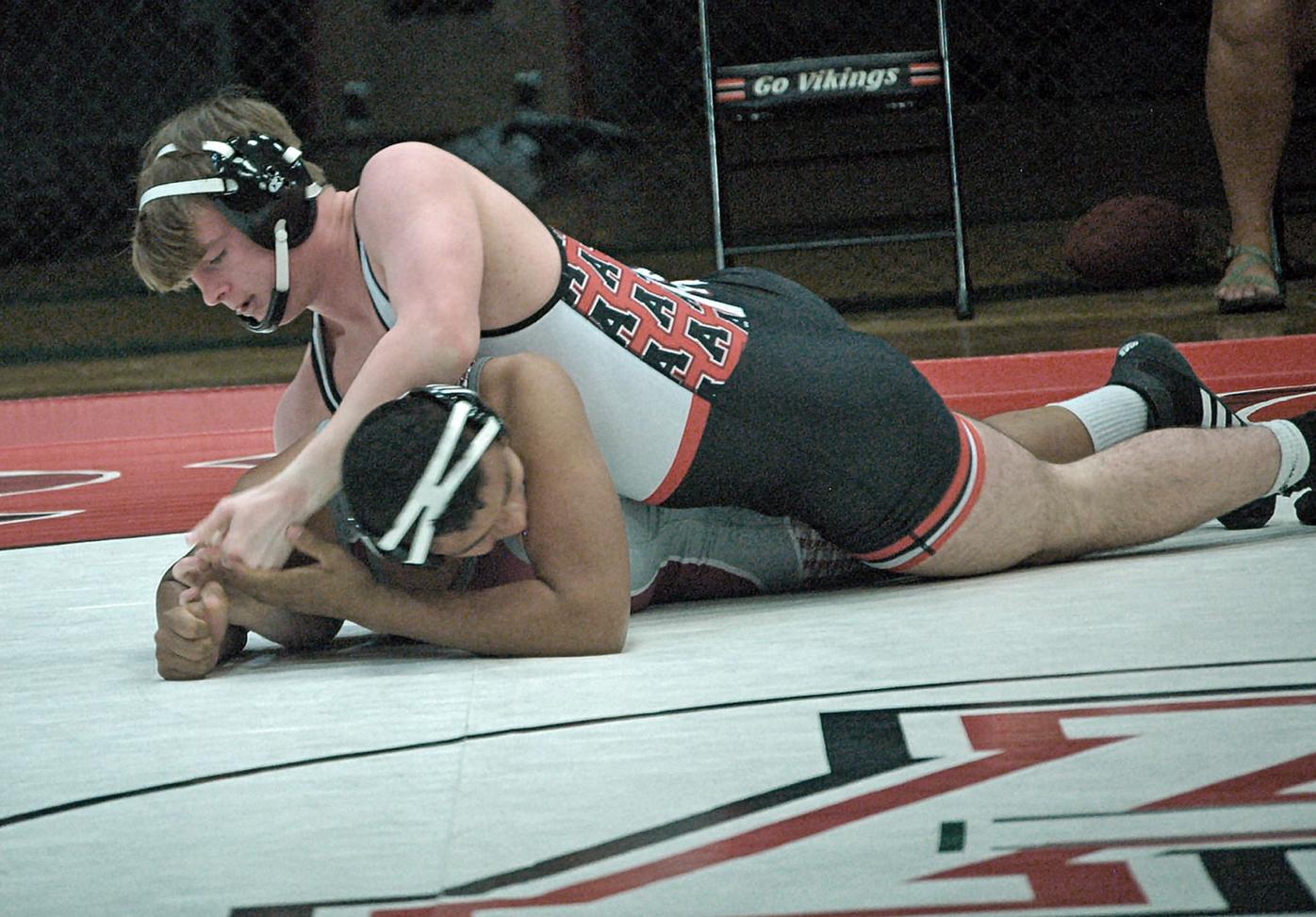 Avery’s Seth Blackledge controls an opponent in high school wrestling action from earlier this season. Blackledge earned a pair of wins in dual meets last week, including a pinfall victory in 36 seconds over West Lincoln opponent Jake Gragg in the 182-pound weight class. 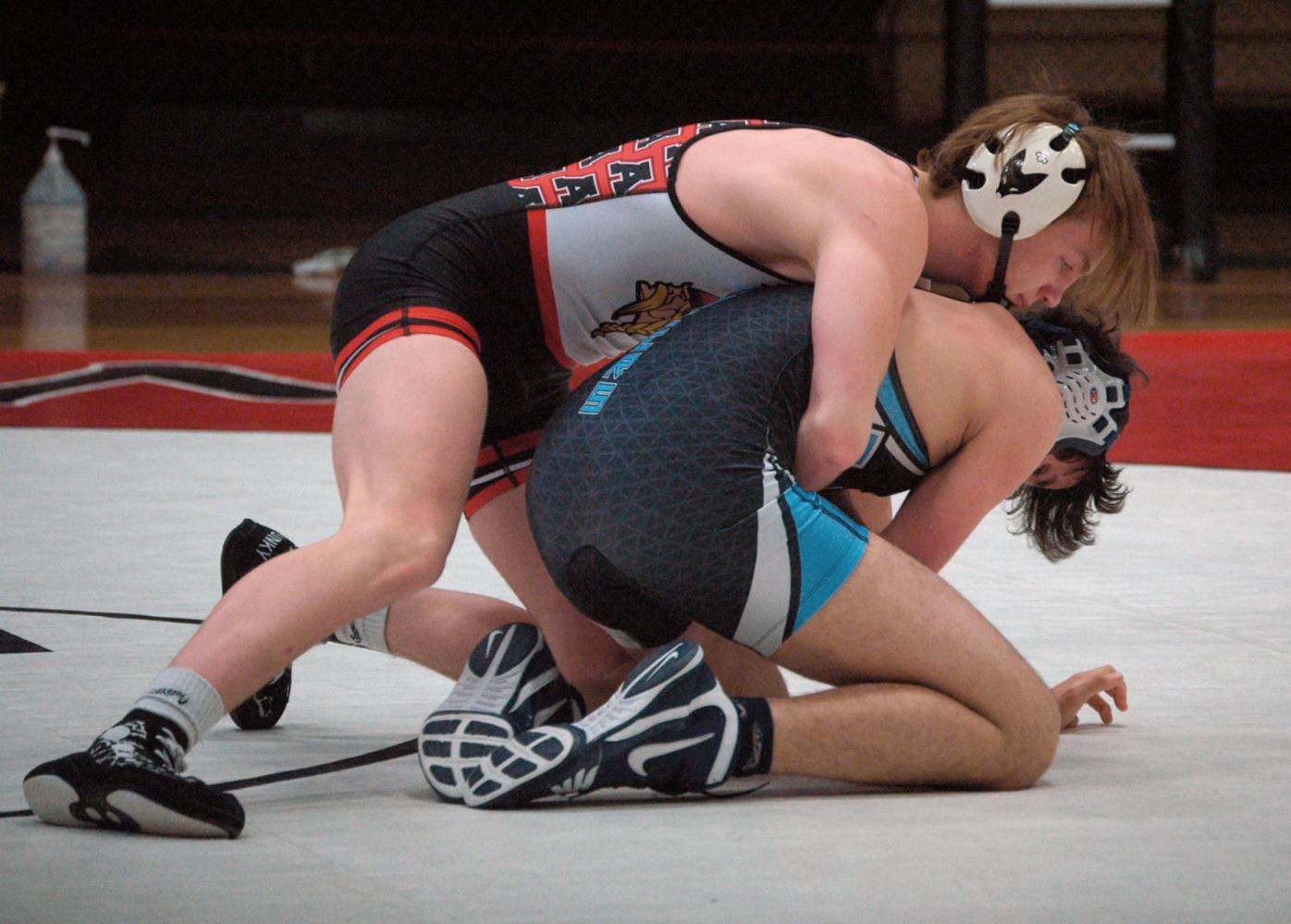 Johnathan Cable earned a pair of wins last week in the 145-pound weight class, including a pinfall victory over West Lincoln’s Luke Heavner.

Avery’s Seth Blackledge controls an opponent in high school wrestling action from earlier this season. Blackledge earned a pair of wins in dual meets last week, including a pinfall victory in 36 seconds over West Lincoln opponent Jake Gragg in the 182-pound weight class.

Johnathan Cable earned a pair of wins last week in the 145-pound weight class, including a pinfall victory over West Lincoln’s Luke Heavner.

LINCOLNTON — The Avery wrestling team was scheduled last week for a dual meet at Mountain Heritage, but after the match was canceled, the Vikings staff hastily was able to schedule a tri-match on Tuesday, May 25, against non-conference opponents Ashbrook and West Lincoln high schools. Avery easily dispatched of the Green Wave from Ashbrook, but faced a stern test in host West Lincoln before also emerging victorious in that dual meet.

Beginning its matchup at 126 pounds, the Vikings got off to a hot start, winning its first eight bouts. Grant Reece started the Vikings scoring spree with a win in injury time over Ashbrook’s Parker York. Ethan Shell (132 pounds), Jonah Hayes (138 pounds), and Johnathan Cable (145 pounds) each were victorious by forfeit, with Tristan Adams (152 pounds) earning a second-period pinfall against Ashbrook’s Ethan Rhyne-Davis. Bradley Parker earned a 7-1 decision victory for the Big Red over Ashbrook’s Elijah Antis, as teammates Dalton Towe (170 pounds) and Seth Blackledge (182 pounds) each won bouts by forfeit.

Ashbrook scored its first points of the match as the Green Wave’s Xander Burden battled Avery’s Dakota Hoilman, escaping with a narrow 6-4 decision victory. Avery bounced back with a forfeit win at 220 pounds by Zach Vance, while Levi Andrews (285 pounds) won by pin in 24 seconds over opponent Cullen Watkins.

Ashbrook picked up another narrow win by decision, this time at 106 pounds, as Devon McCollough defeated Avery’s Francisco Turja by a 9-7 bout score. Avery’s Ben Jordan earned a forfeit win at 113 pounds, with Ashbrook’s Chandler McQueen winning the final bout of the dual by pin over Avery’s Wilson Wilson at 120 pounds.

Avery squared off for a second dual meet of the evening against host West Lincoln. The Rebels provided stiffer competition to the Vikings, but the Big Red showed its mettle and veteran poise in remaining unbeaten in dual matches this season.

West Lincoln showed strength in the lightest weights during the dual, as the Rebels captured bout victories by pinfall at 106 pounds, 120 pounds and 126 pounds. Avery’s Ben Jordan was the lone Viking victor, capturing a win by first period pinfall at 113 pounds over West’s Eli Leatherman.

Ethan Shell faced a stiff test in opponent Langston Hoffman, but was dominant in an 11-0 major decision victory. West’s Luke Stewart snapped the win streak of Avery’s Jonah Hayes at 138 pounds with a second period pinfall, but Avery responded with victories in seven of the next eight bouts, including five consecutive wins, in the middle and upper weight classes to take control of the match.

Avery was scheduled to host a dual match against Madison on Friday, May 28, but that match was canceled. The Vikings are scheduled to compete in a tri-match on Tuesday, June 1, in Columbus against West Henderson and host Polk County, with another tri-match scheduled for Thursday, June 3, in Swannanoa against North Buncombe and host Owen. Avery’s next scheduled home match is its annual Alumni and Senior Night on Tuesday, June 8, when the Vikings welcome neighboring Mitchell to Viking Gym.