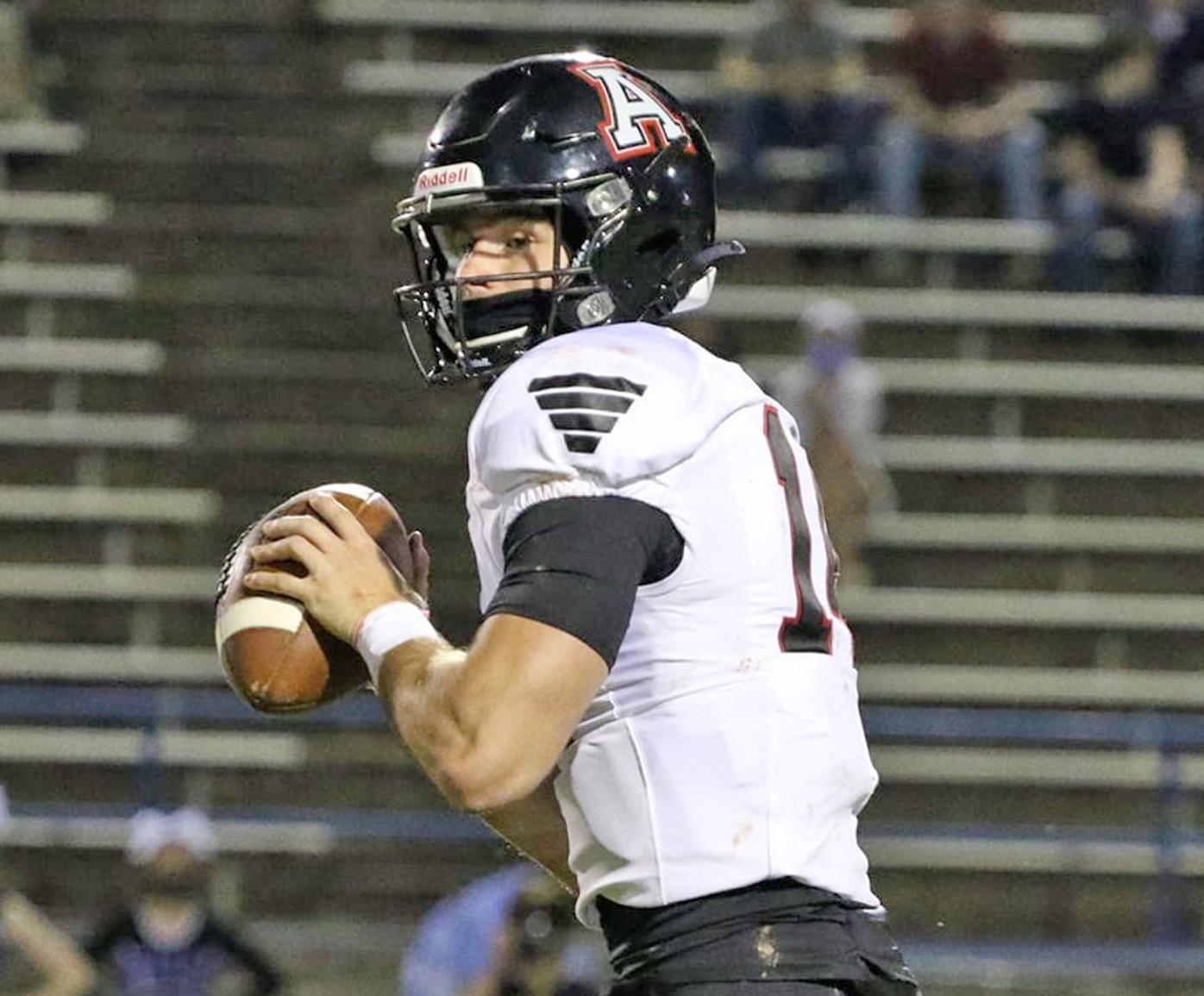 Avery senior quarterback Troy Hoilman threw for 310 yards and three touchdowns, while running for more than 100 yards with a rushing touchdown in Avery’s contest at Owen last week. 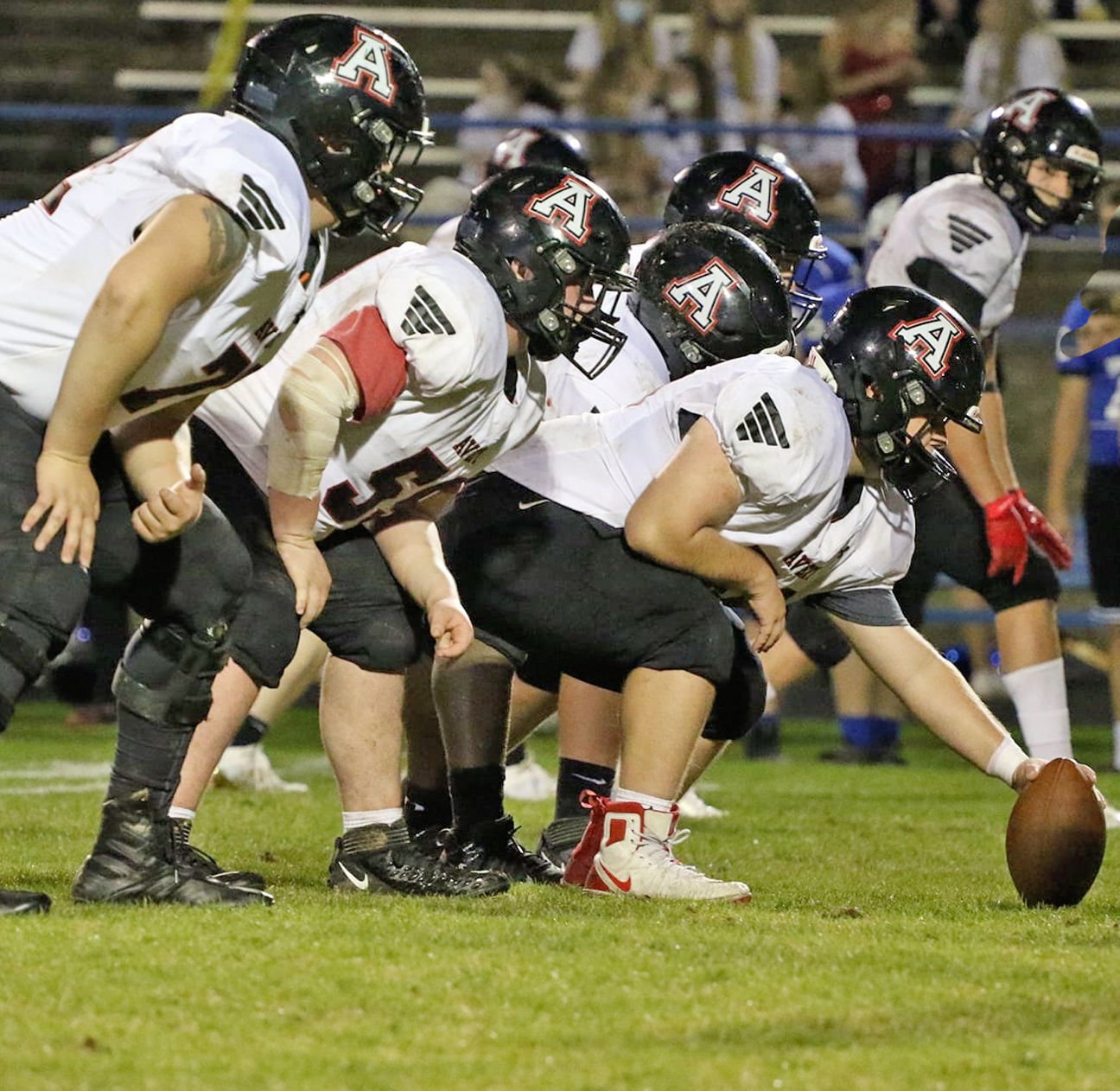 The Avery offensive line is set for the snap in conference action. Avery’s offense produced 43 points in last week’s game at Owen. 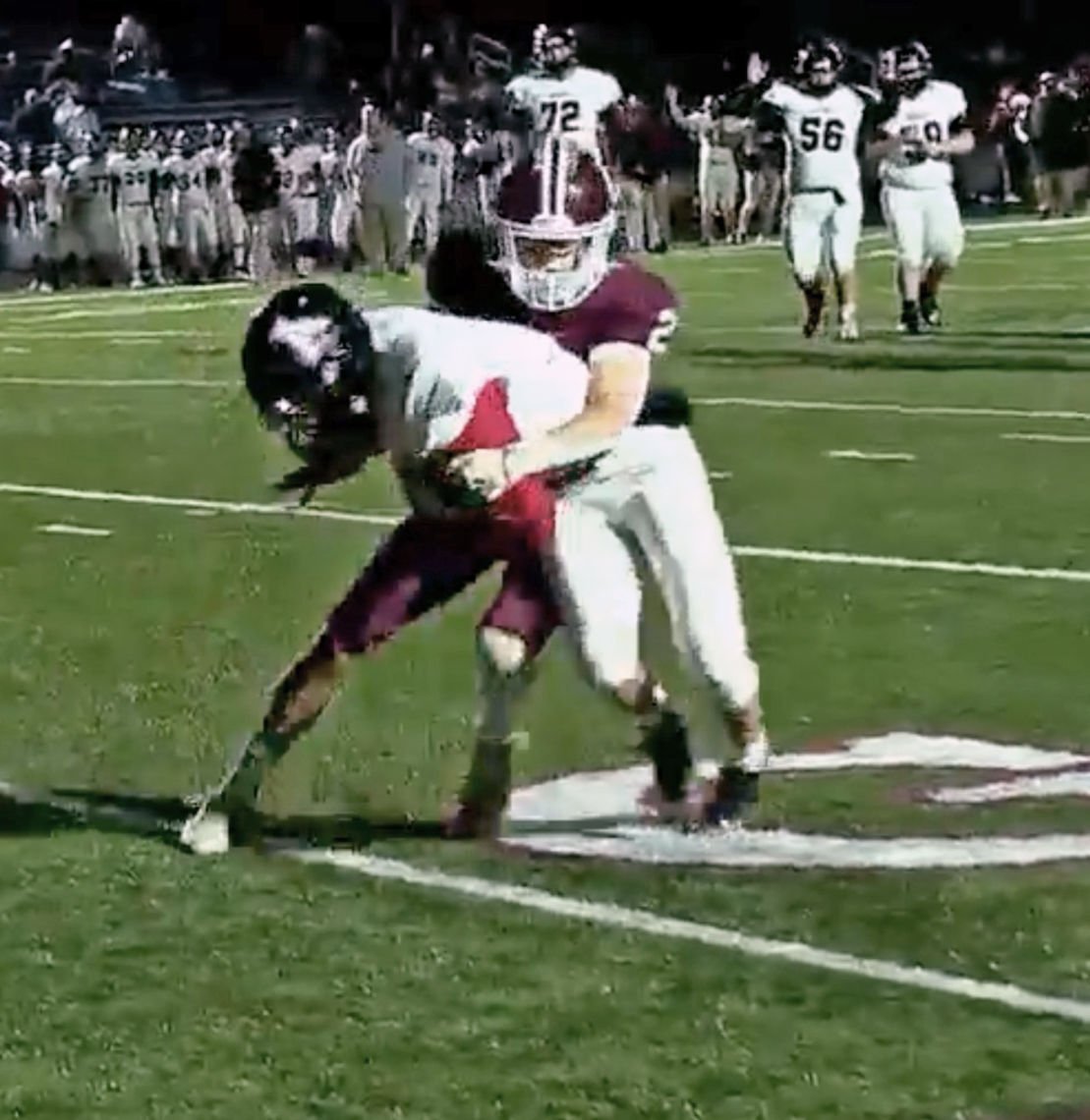 Avery senior receiver David McCollum stretches for one of his three touchdown receptions in last week’s game at Owen.

Avery senior quarterback Troy Hoilman threw for 310 yards and three touchdowns, while running for more than 100 yards with a rushing touchdown in Avery’s contest at Owen last week.

The Avery offensive line is set for the snap in conference action. Avery’s offense produced 43 points in last week’s game at Owen.

Avery senior receiver David McCollum stretches for one of his three touchdown receptions in last week’s game at Owen.

SWANNANOA — Looking to rebound from its first loss of the spring season, the Avery Vikings offense clicked on all cylinders for a good part of its matchup against the Owen Warhorses. An exceptional performance from OHS quarterback and Western Carolina University recruit Caleb Scott ultimately proved too great to overcome, however, as Avery fell 50-43 to the Warhorses on Friday, April 2.

Both teams had spurts where it appeared seemingly powerless to stop the opposing offenses, as the clubs racked up a combined 965 yards in total offense for the night. Avery gained more than 500 yards in offense, including a 310-yard passing game from Vikings senior quarterback Troy Hoilman, who announced his intention this week to attend Wake Forest University with plans to play football. Hoilman led the team in rushing yards, running 10 times for 111 yards and a touchdown in the loss, while throwing for three scores on 16-of-34 passing.

Avery marched downfield with its first possession, using five plays to drive 65 yards capped by a Chad Giarrusso 2-yard touchdown plunge as the Big Red drew first blood to take a 7-0 lead less than two minutes into the game.

Owen answered with its own score, taking 12 plays to march 55 yards, as Scott connected with receiver Jacob Price on a 10-yard scoring pass. The extra point was blocked, preserving a narrow 7-6 Avery lead with 4:11 left in the opening period.

As it did on its first series, Avery again made headway on the Warhorse defensive unit. A pair of completions to McCollum opened the Viking drive, with a 28-yard completion to Smith setting AHS up inside the Owen red zone. On fourth down from the Owen 7, Hoilman called his own number and scampered into the end zone. Giarrusso’s PAT spotted Avery a 14-6 lead at the end of the first quarter.

Unfazed, the home team threw its own counterpunch, driving 57 yards in five plays to reach pay dirt when Scott found receiver Orion Angus for a 39-yard touchdown. A two-point conversion try failed, leaving Avery with a 14-12 lead with 9:41 left to play before halftime.

Following an exchange of punts, Avery found itself with field position near the Owen 30 to begin a drive, but the Vikings were unable to capitalize as a sterling defensive play from Owen’s Briggs Barker broke up a pass on fourth down to turn Avery away on downs.

With time ticking down in the half, Owen was aided by a 48-yard completion from Scott to Jacob Price to set up shop at the Avery 11-yard line. The Vikings defense bowed its neck, however, forcing Owen to settle for a 26-yard Logan Melton field goal with 1:00 to play that gave the Warhorses its first lead of the night at 15-14, a lead it took into the locker room at the half.

Neither team was able to move the football with their respective first offensive series of the third quarter, but the Vikings committed the first major mistake of the half when a poor fourth-down snap to punter Giarrusso resulted in a nine-yard loss, giving OHS possession inside the Avery 10. Two plays later, Scott crossed the goal line on a 5-yard touchdown run, with Melton’s PAT extending the Warhorse advantage to 22-14.

The Vikings offense found rhythm on its ensuing series, as a pair of Hoilman completions netted 49 yards, with an added Owen personal foul penalty placing the Avery offense at the Owen 11. From there, Hoilman connected with McCollum for a touchdown. A successful two-point pass play from Hoilman to Smith knotted the game at 22-22 with 7:43 to play in the third quarter.

Avery’s defense rose up to force a three-and-out, and a poor Scott punt gave the Viking offense another possession with good field position inside the OHS 40-yard line. Six plays later, Avery was on the scoreboard again, as Hoilman hooked up with McCollum on a 17-yard scoring pass. Giarrusso’s PAT again gave the Vikings the lead at 29-22 in a seesaw affair.

On its next series Owen needed an answer and leaned on its seasoned quarterback to lead the way, as Scott completed a trio of passes, then capped the scoring drive with a 41-yard scurry through the Avery defense to the end zone. Melton’s PAT again tied the game, this time at 29-29 with less than three minutes left in the stanza.

Disaster struck the Avery special teams unit, as the Vikings fumbled the ensuing kickoff, which Owen recovered at the Viking 23-yard line. Four plays later, Scott scored again, this time a 2-yard jaunt, to propel the Warhorses out front by a 36-29 score.

Avery went three-and-out with its next offensive series, and Owen kept momentum on its sideline when Scott connected with Price for a 24-yard TD pass to cap a four-play, 62-yard drive and increase its lead to 43-29 just 65 seconds into the fourth quarter.

Moving the football on offense looked easy at times for the Vikings offense, as proven on the ensuing Avery drive after the latest Owen score, an eight-play, 69-yard possession highlighted by a 22-yard completion from Hoilman to Smith, and culminated with a 12-yard Giarrusso touchdown run. The sophomore running back’s PAT drew Avery within a score at 43-36 with 8:05 remaining in the game.

After Owen recovered an onside kick attempt, the Warhorses capitalized on the short field, as Scott dropped a pinpoint pass to a streaking Price down the left sideline for a 32-yard touchdown to again extend its lead to 14 points at 50-36 midway through the fourth quarter.

Avery again was poised to answer the challenge and post more points on the board, as Hoilman escaped the Owen defensive line and scurried through the Owen secondary, outracing the Warhorses for a season-high 66-yard run. Giarrusso broke through the Owen line on a third-down play moments later, but Warhorse lineman Blake Roberts came from behind and punched the ball from the running back’s grasp, which OHS’s Savoy Harding recovered at the Owen 11.

Needing to make a stop with time running down, Avery surrendered a pair of first downs before slowing the Owen offense near midfield to force a punt with 1:19 to play. Down a pair of scores, the odds were great against a Viking comeback, but Avery refused to lay down and quit. On Avery’s first play from scrimmage following the Owen punt, Hoilman located McCollum, who had gotten behind the Owen secondary and out-galloped the Warhorses for 81 yards and a touchdown, sparking an explosion of emotion from the Avery sideline and bleachers as Avery narrowed the deficit to 50-43 with 1:05 to play.

Avery came tantalizingly close to recovering an onside kick, but the kick traveled only nine yards instead of the required 10 yards. With possession, Owen was unable to run out the remaining time, however, eventually being forced to punt the ball to the Vikings at its own 21-yard line with just nine seconds on the clock. With such short time, Avery sought a miracle touchdown, but multiple laterals on the final play led the Vikings to come up one score short for its second loss of the season.

Three turnovers hindered the Avery cause in the loss, while the Vikings defense forced a pair of Owen interceptions. Scott was the Warhorses’ spark plug, completing 16-of-21 passes for 232 yards and four touchdowns, adding 108 rushing yards on 21 carries and three touchdowns. Roberts gained 78 yards rushing on 11 carries, with 149 yards on seven receptions from Price.

Levi Andrews was the defensive leader for the Vikings with 10 tackles, with seven tackles each from Ty Smith and Dalton Towe, 6.5 tackles from John Lee and six tackles from Chandler Berry.

Avery (2-2, 0-2 WHC) returns to action on Friday night, April 9, when it hosts unbeaten Mitchell in its regular-season finale. Avery Athletics will be recognizing its fall sports seniors at MacDonald Stadium that evening, with football and cheerleader seniors honored at 6:25 p.m. while volleyball, cross country, swimming, boys soccer, and girls and boys golf seniors will be recognized at halftime.