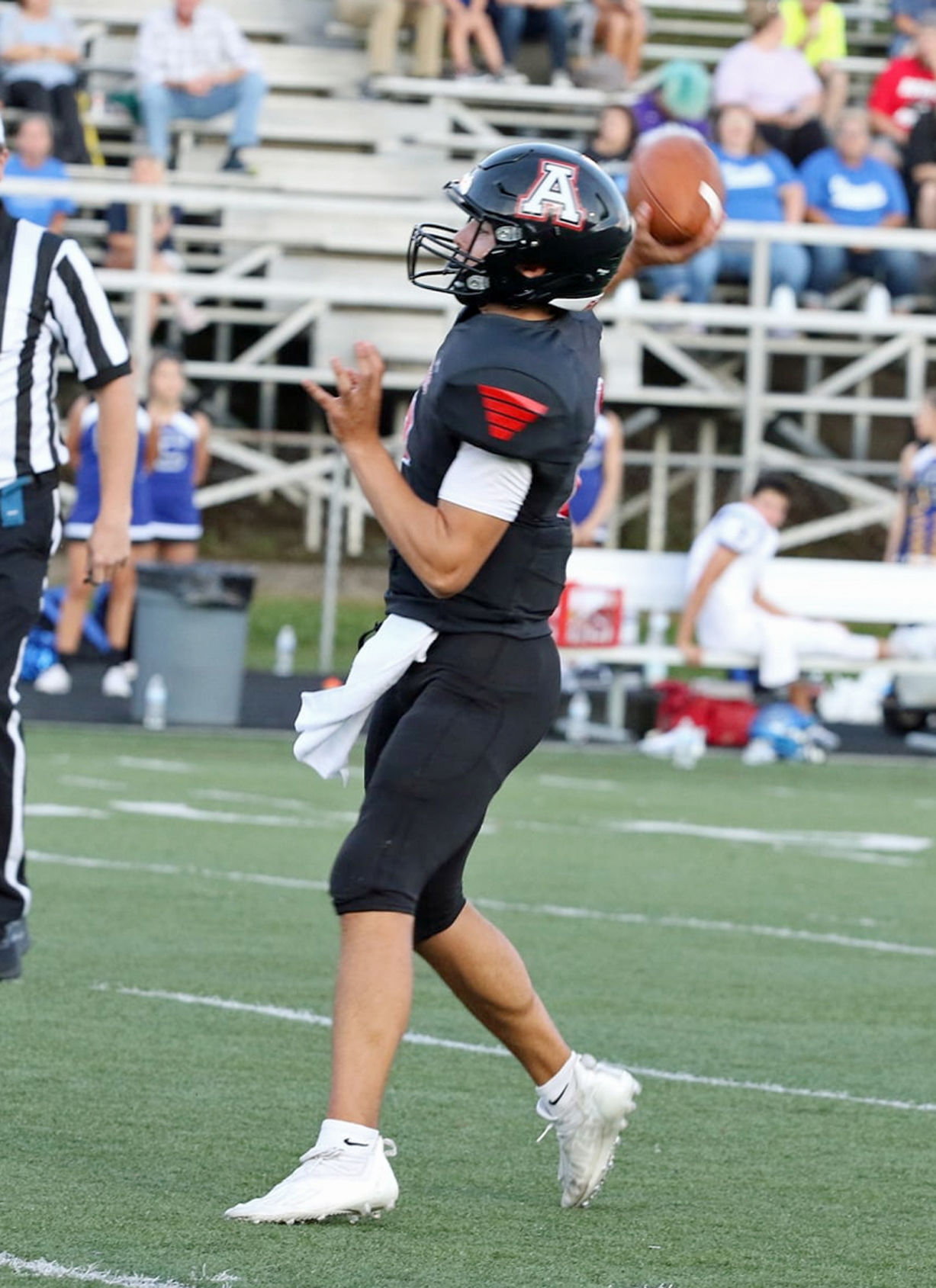 Avery quarterback Will Stanford looks downfield to find a receiver in action at MacDonald Stadium. Stanford threw for 200 yards in the Vikings’ matchup last week against McDowell. 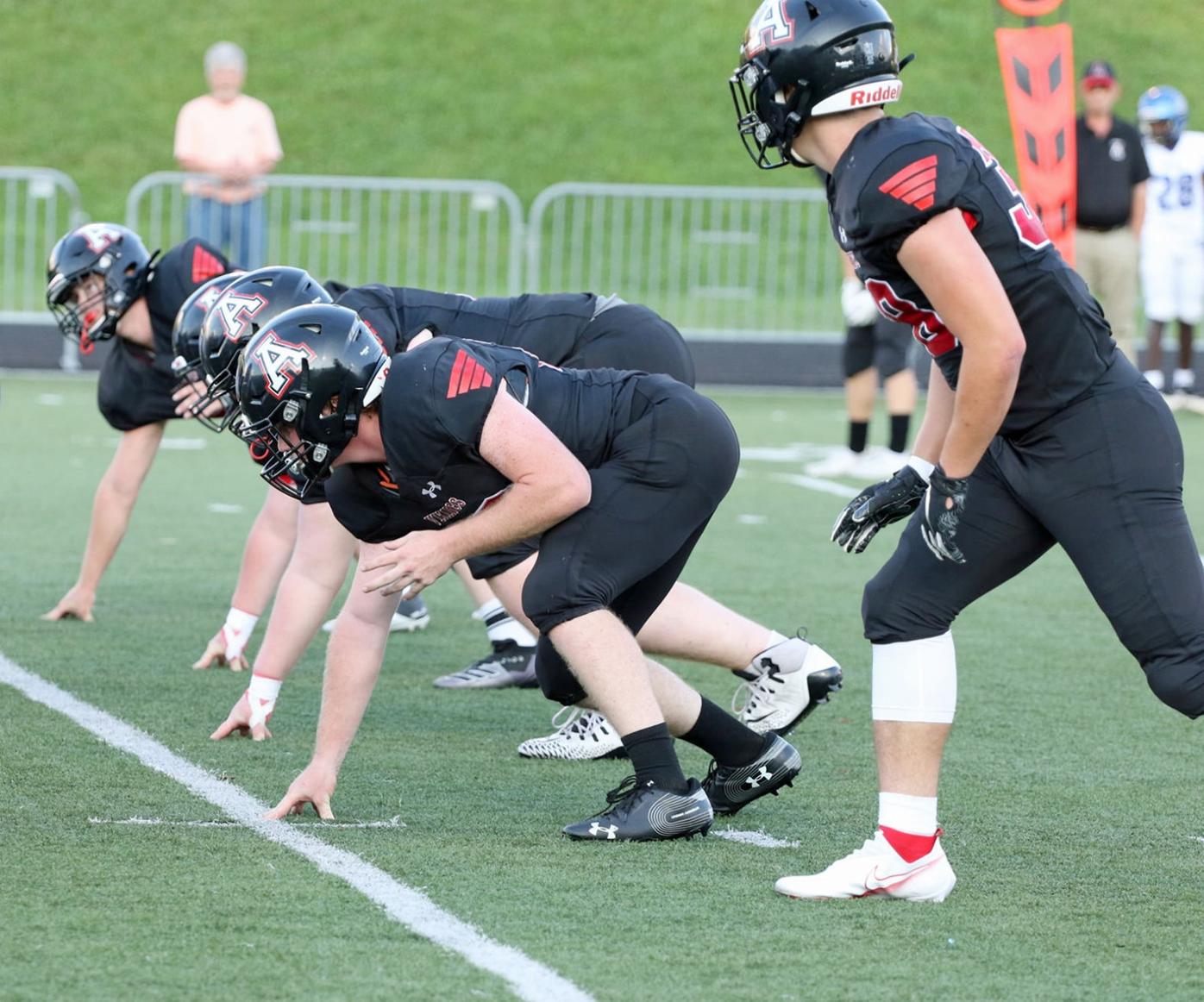 The Avery defensive line comes off the football in home football action. Avery’s Dakota Hoilman had seven tackles, with six tackles by Levi Andrews and a sack by Lane Hoilman, indicative of the pressure put on the McDowell offense last week.

Avery quarterback Will Stanford looks downfield to find a receiver in action at MacDonald Stadium. Stanford threw for 200 yards in the Vikings’ matchup last week against McDowell.

The Avery defensive line comes off the football in home football action. Avery’s Dakota Hoilman had seven tackles, with six tackles by Levi Andrews and a sack by Lane Hoilman, indicative of the pressure put on the McDowell offense last week.

NEWLAND — With approximately five minutes remaining in its non-conference matchup, the Avery Vikings varsity football team held an 11-point advantage over the visiting McDowell Titans. A pair of touchdowns from MHS, the latter with just 25 seconds remaining in the game, capped a frantic rally as Avery was denied its first victory of the 2021 fall season in a 36-33 loss.

Avery junior running back Chad Giarrusso gained more than 100 yards for the third time this season, gaining 102 yards on 27 carries with a pair of touchdowns, while quarterback Will Stanford threw for 200 yards and a pair of scores on 11-for-24 passing, and gained 95 yards on the ground on 15 carries with a rushing touchdown.

“We had a chance as a 1A school to knock off a 4A school, and we had every opportunity to do that. I felt our kids played really hard and for the most part pretty well,” Avery head football coach Mac Bryan said after the game. “We’ve made improvement every week and it showed. I told the team last week that we were ready to win this ballgame, and I felt we were. No doubt you can see the improvement. We did some good things defensively. We gave up a few plays, but you’re going to give up some during the course of a game, and offensively we had a lot better rhythm and was able to balance the run and pass pretty effectively. I think Will Stanford made some really good strides the past two weeks, beginning with the game last week, but it may have been a little more obvious to the fans in the stands this week.”

Avery took the opening kickoff and held the possession for almost six minutes before a fourth-down conversion try in McDowell territory was stuffed. With its opening offensive series, McDowell showed little rust from its two-week layoff due to COVID issues, capping a 14-play, 67-yard drive with a Gabe Marsh 25-yard touchdown pass to Josh Ellis. The Hunter Kirby PAT gave the Titans a 7-0 lead with 2:07 to play in the first quarter.

Avery’s offense responded quickly to the game’s first score with one of its own. Three plays after a 22-yard scramble from Stanford, the sophomore quarterback connected with Viking wideout Elijah Holtsclaw with a 43-yard touchdown pass. Giarrusso’s PAT knotted the game at 7-7 in the final half-minute of the opening stanza.

The Titans offense found success moving the football on its ensuing series, as Marsh capped a four-play, 53-yard drive with a 4-yard touchdown run to propel the visitors back out front 14-7 in the opening minute of the second period.

Following an Avery pass interception and a McDowell punt, Avery settled down and again found its offensive rhythm. An 11-play, 68-yard drive was highlighted by a pair of third-down conversions, chunk carries by both Stanford and Giarrusso, and culminated in points when Stanford passed to wide receiver Mason Thomas for an 11-yard touchdown. Giarrusso’s extra point tied the game again, this time at 14-14 midway through the quarter.

McDowell kept the ensuing possession for much of the remainder of the quarter before having to punt back to Avery. With just more than a minute to play in the half, an errant snap deep in Avery territory bounced into the Vikings’ own end zone, where Avery covered the ball for a safety, providing the difference in a 16-14 MHS lead at halftime.

The Vikings appeared to be the sharper team coming out of the locker room for the second half. Avery’s defense held McDowell to a three-and-out on its first possession, and the Big Red offense responded with a 70-yard march that consumed more than four minutes of the third-quarter clock. Giarrusso found the end zone on a 9-yard jaunt, staking AHS to a 20-16 lead.

Avery’s defense forced McDowell into a second consecutive punt in the period, then opened the fourth quarter by padding its lead. A 12-play, 82-yard march was capped by a 5-yard Stanford run. The PAT gave the Big Red a 27-16 lead with 10:54 to play in the contest.

The visitors from Marion refused to fold facing a deficit, as the team responded with its own touchdown, a 32-yard Blake Boswell scoring run just more than three minutes later. The extra point kick failed, leaving the Vikings with a five-point advantage at 27-22.

Looking to throw a knockout punch, Avery’s offense struck quickly, using a little more than two minutes to find the end zone once again. Stanford completed a third-and-long pass play to Holtsclaw that covered 69 yards, with Giarrusso scoring on a 5-yard scamper two plays later. The extra point was blocked by MHS, leaving Avery with a 33-22 lead with 5:35 to play.

Momentum which seemed to be solidly in favor of the Vikings for most of the second half swung in the opposite direction to finish the game. McDowell used the momentum of converting on a 4th-and-10 at its own 20-yard line to complete four consecutive passes and eventually score on a Boswell 9-yard run with 3:38 to play. The successful two-point conversion cut Avery’s lead to 33-30.

Bryan noted after the game the significance of the Titans converting the key fourth down pass play. “We were in the situation where we should win the game. They have that fourth down and 10 at their 20-yard line. If they don’t convert that fourth down, we get the ball and we probably go in and score to make it an 18-point lead with about three minutes to go and the game’s over,” Bryan explained. “They converted the fourth down, and we just can’t allow that. We tell the kids there are four or five plays in every game that determine the outcome, maybe six. You just don’t know when they’re coming, but that was one of them.”

Despite the score by McDowell, Avery still had control of the game, needing only to convert a first down and force the Titans to call timeouts to run out the clock. The Vikings offense did force a pair of McDowell timeouts, but could not gain a first down and were forced to punt back to the Titans with with 2:19 to play.

With possession, the McDowell offense put together a 10-play, 85-yard drive, with Marsh finding Ellis on a 24-yard touchdown pass with 25 seconds remaining to give the Titans back the lead at 36-33.

With a timeout and 20 seconds to play following the MHS kickoff, Avery had one final opportunity to tie or win the game. Avery managed to cross midfield with the help of a defensive personal foul penalty against the Titans. With four seconds to play and Avery at the MHS 43-yard line, Bryan and the Viking coaching staff opted to attempt a 60-yard field goal to try to send the game to overtime. The kick by Giarrusso was strong, but fell short of the mark, as the Titans celebrated its second win of the season with its head coach, longtime former Avery Vikings coach Darrell Brewer.

“All we had to do was make a first down and bleed their timeouts to run out the clock, and we weren’t able to do that,” Bryan said of the game’s closing minutes. “Chad’s rugby punt pinned them back to the 15-yard line, and the bottom line is that we’ve just got to stop them from scoring. Give them credit. They’re a good football team and it was a good game.”

Despite the loss, Bryan noted continued strides and positive signs of improvement from his team that will serve it well entering conference play this week.

“We made some strides and held up well against a big school,” Bryan added. “We lost a lot of productivity from last year and we’re a young team this year, but the kids who have been working and have been committed, you can see the strength factor that’s starting to develop where we’re able to hold our own against a good football team.”

Avery opens conference play this week when it travels to take on WHC newcomer Rosman in Transylvania County. Kickoff is slated for 7:30 p.m.

With a strong defensive performance, Montana State moves on to FCS quarterfinals

Saints Huddle: What's wrong with the Saints? What will it take to fix it? Is it too late?