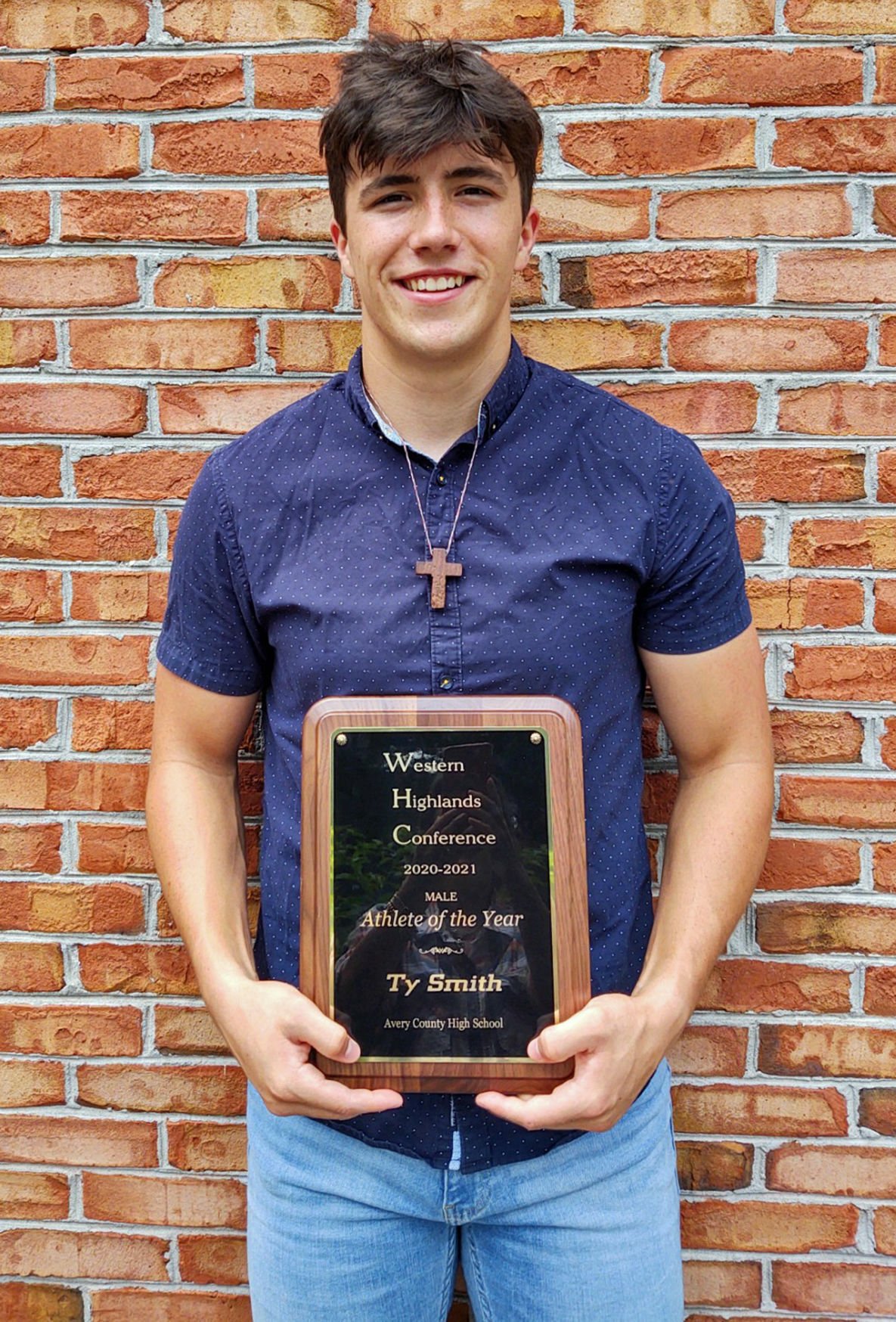 Avery High School standout Ty Smith was named Western Highlands Conference Male Athlete of the Year following a prolific 2020-21 performance in the sports of football, track and field, and baseball. 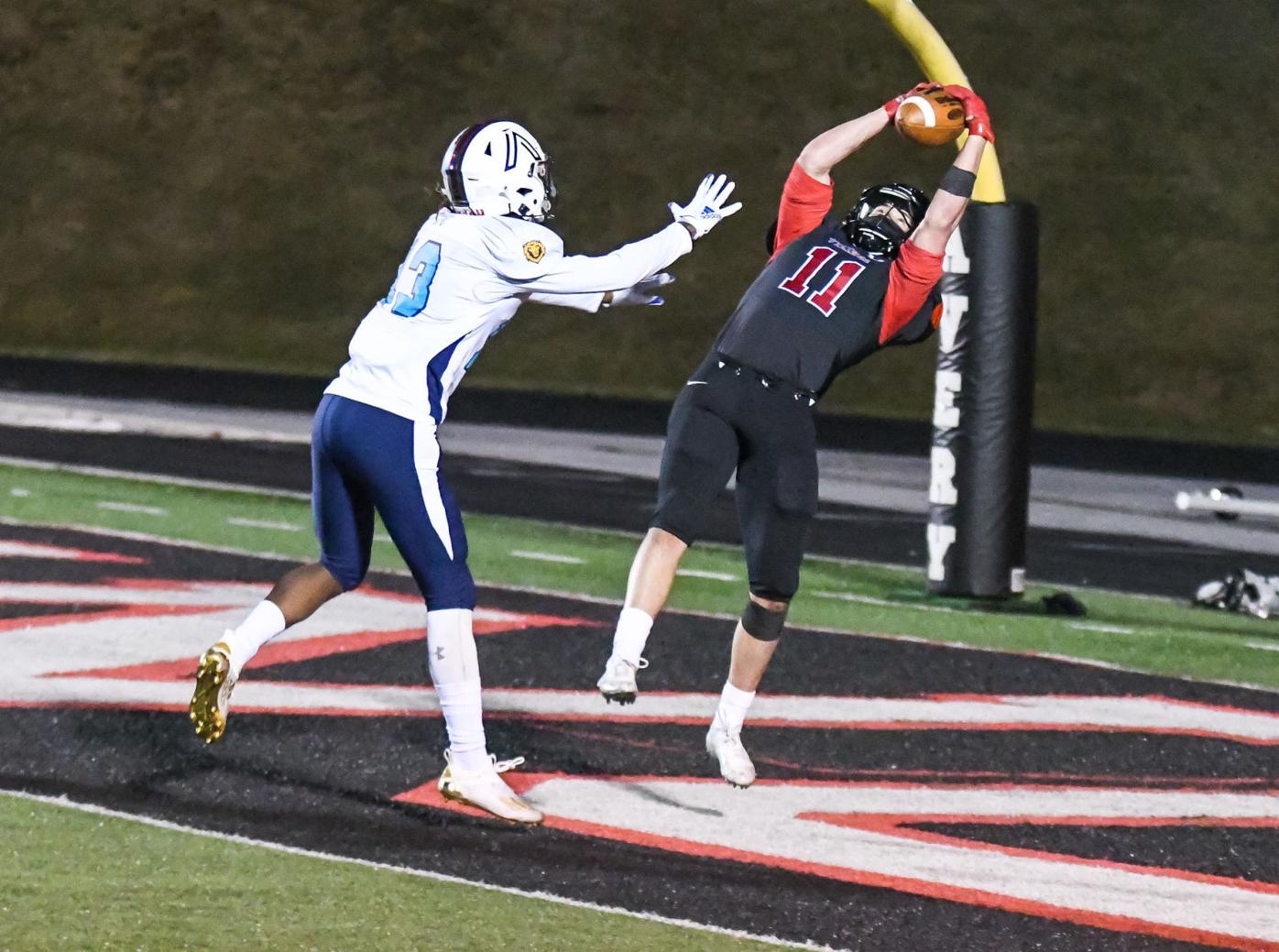 Avery Vikings senior wide receiver Ty Smith extends to catch a touchdown pass from Troy Hoilman on the final play of the first half in Avery’s 42-20 win over Asheville Christian Academy to open the Spring 2021 football regular season on Thursday, Feb. 25. Smith excelled in three sports and was named WHC Male Athlete of the Year.

Avery High School standout Ty Smith was named Western Highlands Conference Male Athlete of the Year following a prolific 2020-21 performance in the sports of football, track and field, and baseball.

Avery Vikings senior wide receiver Ty Smith extends to catch a touchdown pass from Troy Hoilman on the final play of the first half in Avery’s 42-20 win over Asheville Christian Academy to open the Spring 2021 football regular season on Thursday, Feb. 25. Smith excelled in three sports and was named WHC Male Athlete of the Year.

Smith, the son of former Avery High School player and coach Terry and mother Sara Smith, is the youngest of four siblings (Shannon, Wade and Brett) who each played and excelled at the high school and collegiate levels.

With such a successful pedigree, rather than feel extra pressure, Smith explained that he was able to use his siblings’ experiences to help transform him into a better overall athlete and teammate.

“I wouldn’t say that it put extra pressure on me. I think the main thing I learned from my family was about character and how to deal with certain situations, because I could see where they were mistreated or treated well by someone, then I could model how I acted based on how they treated the younger kids than their age,” Smith explained. “It may sound unusual, but I learned about how to take ‘mental reps’ from them. In practice, when players are on the sidelines and not in the game, the coach will tell players to take mental reps. I was able to do that with Shannon, Wade, and Brett, because I was able to see how they acted and treated everyone, how they showed humility, and I could model how I treated younger teammates with the level of respect that they showed to their teammates.”

Smith was an All-Western Highlands Conference performer in football in both his junior and senior seasons, as he amassed 1,414 receiving yards on 107 catches, with 21 touchdowns in a span of only 16 contests, while also dominating opposing offenses in the Avery defensive secondary.

“Ty is basically a 4.0 student. I’m not sure the average person in the county realizes what an accomplishment being a conference athlete of the year entails,” Smith’s football coach Mac Bryan said. “I just hate seeing someone as good as Ty has been not be recognized due to Covid’s effect on the sports landscape like he would be honored in a normal year. We’re not going to have anyone like Ty catching passes and playing safety the way he did for a long time. We may struggle with that, but he was a good player and was impactful when he was out on the field, no doubt about it.”

“You couldn’t find a more respectful and hard working young man. Ty always brought positivity and leadership with him everywhere he went. Throughout the challenges he faced throughout this year with Covid, Ty never lost focus of trying to be the best teammate he could be,” Avery assistant baseball coach Griffin Rogers said of Smith’s impact on the diamond and in the team clubhouse. “When his teammates would struggle or make an error, Ty was always the first person to be there to pick them up and offer suggestions or to shake it off and get it next time. Ty is one of the most coachable kids. He would take every piece of information you shared with him and incorporate it into his game and work on it to better himself. Without Ty and his leadership this year, the team would’ve been at a major loss on the leadership side of baseball. Ty will be greatly missed in this program and it has been a privilege to coach such a great young man.”

Smith received his award from Avery Athletic Director Jay Smith at the state track meet in Greensboro, where he and his teammates were competing in one of the boys relay events.

“It is a tough award to get, especially on teams that didn’t have the greatest record. But I’ve had some great coaches like Coach Bryan, who just let me go out there and play football to my own ability. He let me go out on the field and do what I felt comfortable with and needed to do to help the team win,” Smith added. “The coaches did the same thing with me with baseball. Coach (Stafford) never relayed a sign to me on the base paths, and trusted me enough to let me steal whenever I thought it was a good time. Cary and Rein (track coach Don Reinhofer) are both great characters who have helped me out so much since I joined them during my sophomore year in track. After a baseball practice they were having a track meet at the high school, and Cary let me run the 4x100-meter relay with David (McCollum), Mason (Daniels) and Troy (Hoilman), and that’s how my track career began.”

Smith also quickly deflects any praise to family and teammates for their contributions to any of his individual success.

“It was really exciting to get the award, but there was no way I could have done it by myself. I had a great family and they were a great support group. Being the youngest out of my siblings, it made it easier for me because I could see the mistakes and the successes they had and how they dealt with them,” Smith said. “Troy helped out a lot on the football side. I have to start with him as he was the quarterback and leader of the football team, as well as our primary captain. He helped me so much, and I wouldn’t have been able to catch all those passes without him. In baseball, seniors like Chandler (Berry) and Jackson (Russ), as well as the young guys who really made the baseball season fun this year, guys Brooks (Berry), Trent (Wellborn) and Evan (Robbins), and all the freshmen who played this year, were enjoyable. I saw how tough it was on the other seniors in Chandler and Jackson, who were basically our two starting pitchers, which was a tough thing to do. Guys like David and Mason in track on the relay team in the 4x400-meters made running track special.”

Although the COVID-19 pandemic drastically affected many aspects of the athletic calendar, Smith explained how he worked through the circumstances to stay prepared in the respective sports, all of which took place during the spring of 2021.

“Playing all the sports in the spring actually helped me a little bit because I was able to have access to a weight room here in Tennessee,” Smith noted. “I was in virtual learning the entire school year and I was able to go out whenever I wanted to run at the track before practice and lift weights when I wanted to. It actually helped me a lot to be able to perform in the spring.”

Smith stated that he has not made any commitments related to his collegiate athletic career, but that he is looking to play both baseball and football in college. He also is considering a post-graduate year.

“It doesn’t happen often when a player who isn’t on a conference championship team earns the Conference Athlete of the Year award,” Bryan added. “That usually goes to someone on a team who won in conference. He was two-time all conference in football, and because everything has been so condensed and out of place this season, I’m not sure many people know what he was able to accomplish in baseball, then he turned around and ran track and qualified for the state as part of the boys relay teams. It’s been a while since we had a player of the year on our football team. He’s been mentioned in our banquet and in other places, but the Conference Athlete of the Year Award is a big deal.”

Two-Minute Drill: Nick Henrich has to find a routine to stay healthy

No offseason, no problems? So far in camp, Aaron Rodgers ‘just in total command out there’