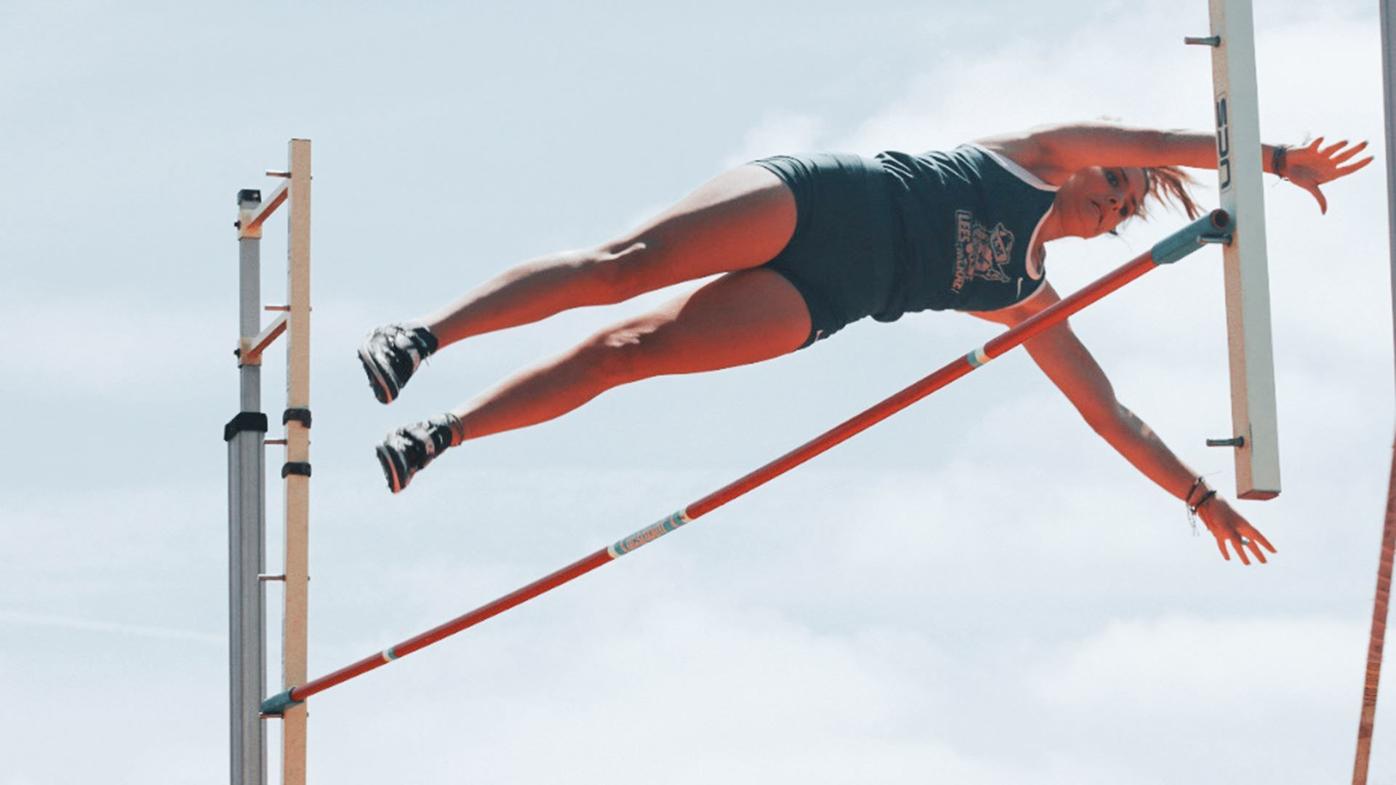 Madi Cantrell is an all-conference pole vaulter for the Bobcats track and field team. 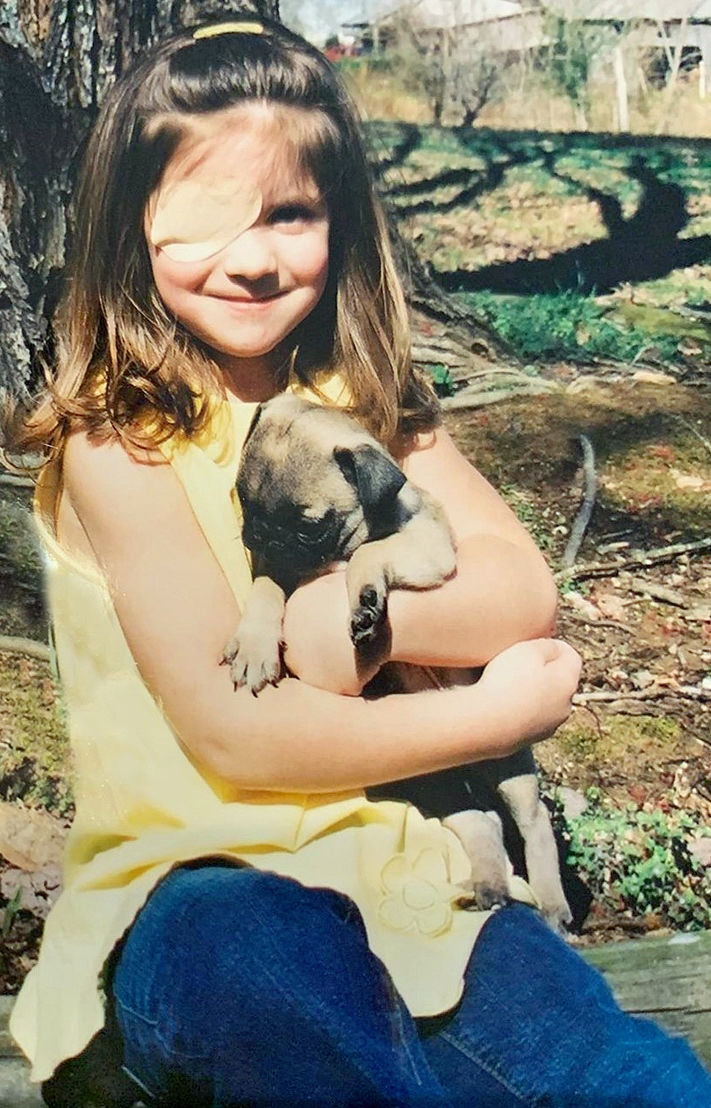 Cantrell was diagnosed with an extremely rare eye cancer, retinoblastoma (which accounts for only three percent of all childhood cancers), at 16 months old, and was born with three tumors on her left eye and had to endure eight rounds of chemotherapy to remove two of the tumors. 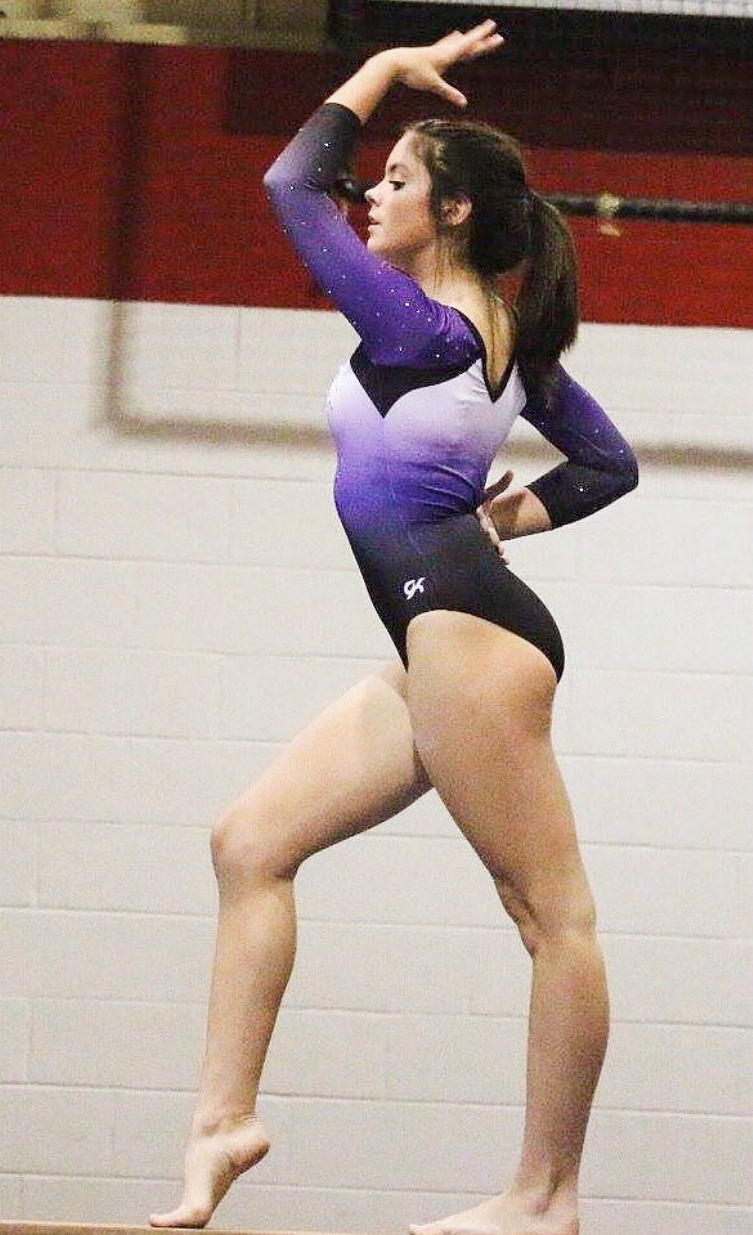 Cantrell developed a passion for gymnastics through a trampoline she received as a Christmas present from her grandfather, which ultimately led her to Lees-McRae.

Madi Cantrell is an all-conference pole vaulter for the Bobcats track and field team.

Cantrell was diagnosed with an extremely rare eye cancer, retinoblastoma (which accounts for only three percent of all childhood cancers), at 16 months old, and was born with three tumors on her left eye and had to endure eight rounds of chemotherapy to remove two of the tumors.

Cantrell developed a passion for gymnastics through a trampoline she received as a Christmas present from her grandfather, which ultimately led her to Lees-McRae.

BANNER ELK — 1-2-3-4-5-jump. A simple cadence that Madi Cantrell, a junior pole vaulter, cheerleader and psychology major at Lees-McRae, has to memorize in order to land her jump.

For most pole vaulters, a simple adjustment to their step, depending on how far they are from the jump, can help them correct a mistake to lift themselves over the crossbar and land safely on the other side.

Diagnosed with an extremely rare eye cancer, retinoblastoma (which accounts for only three percent of all childhood cancers), at 16 months old, Cantrell was born with three tumors on her left eye and had to endure eight rounds of chemotherapy to remove two of the tumors. The third tumor, which is located on her optic nerve, causes her to have 20x200 and double vision, making it difficult for her to locate the box.

“I see double of everything—like I’m seeing two laptops during this interview—and have limited depth perception,” Cantrell said. “So when I’m pole vaulting, I do not know how close or how far I am from the pit. I have to make sure my step is perfect for me to hit the box.”

Someone reading that last paragraph might wonder why anyone would continue to participate in a sport where a single miscalculation can cause a devastating injury?

But if they were to meet Madison, they would understand why she continues to compete at such a high level.

“My parents taught me at a young age to not use my cancer as an excuse for why I can’t do something,” said Cantrell. “It definitely made it harder to do things, but it has never held me back from anything.”

After spending a majority of her early years at St. Jude Children’s Research Hospital, where she remained a patient for 19 years, Cantrell came to the realization in middle school that everyone didn’t experience double vision, after telling her mother that she was seeing double.

“I really don’t remember when I first started seeing double, but I remember mentioning it to my mother,” Cantrell explained. “She was concerned, but I told her that this was normal for me and that I ‘see it all the time’. That was a very different experience.”

Trying to explain her vision to her friends was another experience that Cantrell will never forget.

“People would ask me ‘how do you see’ and ‘how different is it’ and I would mention how I have never experienced normal vision,” said Cantrell. “I would explain it as taking a cloth sheet and putting it over your eyes.”

Around the same time she was getting used to her double vision, Cantrell developed a passion for gymnastics through a trampoline she received as a Christmas present from her grandfather, which ultimately led her to Lees-McRae.

After taking tumbling classes to make sure she didn’t get hurt on the trampoline, Cantrell fell in love with gymnastics, which she competed in for 11 years.

During these tumbling classes, Cantrell learned her timing cadence that she would eventually use to hit the board correctly in vaulting.

“I had to make sure my steps were right to make sure I landed correctly,” Cantrell explained. “Beams were tricky because I had to learn which beam was the fake double and which was the real one. Even in bars, I had to basically guess where it was because of my depth perception.”

It was only when she developed mono during her junior year in high school that she switched over to track & field, upon the advice of a former coach.

“The track coach in high school said that gymnasts make great pole vaulters,” said Cantrell. “So I started my junior year and found a coach in Knoxville, Tenn., who turned out to be former Olympic Gold Medalist Tim Mack, and fell in love with the sport.”

After learning from Coach Mack, a connection through his former coach and former Lees-McRae assistant track & field coach David Johnson put a small college in Banner Elk on Cantrell’s radar.

Once she signed with Lees-McRae in 2018 as a track & field athlete, Cantrell’s tumbling drew the attention of Head Cheerleading Coach Sally Wimberley, who offered her a scholarship as well, making Cantrell a dual-sport athlete.

Cantrell, who never heard of Lees-McRae before meeting Coach Johnson, realized her story ultimately came full circle as she later found out that her parents used to drive past Lees-McRae when coming up to Sugar and Beech Mountain from Tennessee to snowboard in their youth.

During her first year in Banner Elk, Cantrell memorized her timing system to perfection as she became a member of the All-Conference Carolinas Third Team with a mark of 2.90 meters at the outdoor championships in 2019.

“Making all-conference on its own is very exciting. I knew going into the conference meet that I would need to clear every bar to be able to place,” Cantrell said. “For a normal student-athlete that might sound easy, but for me it was tricky due to my vision. Becoming an all-conference performer is something I will always remember.”

After a shortened 2020 season due to the COVID-19 pandemic and in preparation for the upcoming 2021 season, Cantrell took a moment to look ahead to what comes next.

“I hope that this year and next year, I can place again,” said Cantrell. “I absolutely love Lees-McRae and Banner Elk and I hope to experience all that this area has to offer and make sure I finish up strongly in terms of academics.”

For post-graduation, Cantrell wants to use her experiences of overcoming childhood cancer to help children with similar illnesses and hopes to one day be able to work at St. Jude.

“The doctors and staff there are so amazing,” said Cantrell. “They really care for the children as humans and not just patients. I just really love that and it has had a huge impact on my life. I believe it has led to where I am today.”

When looking back at her own story, Cantrell wants people to see someone who had cancer and recovered from it, and look what can be accomplished.