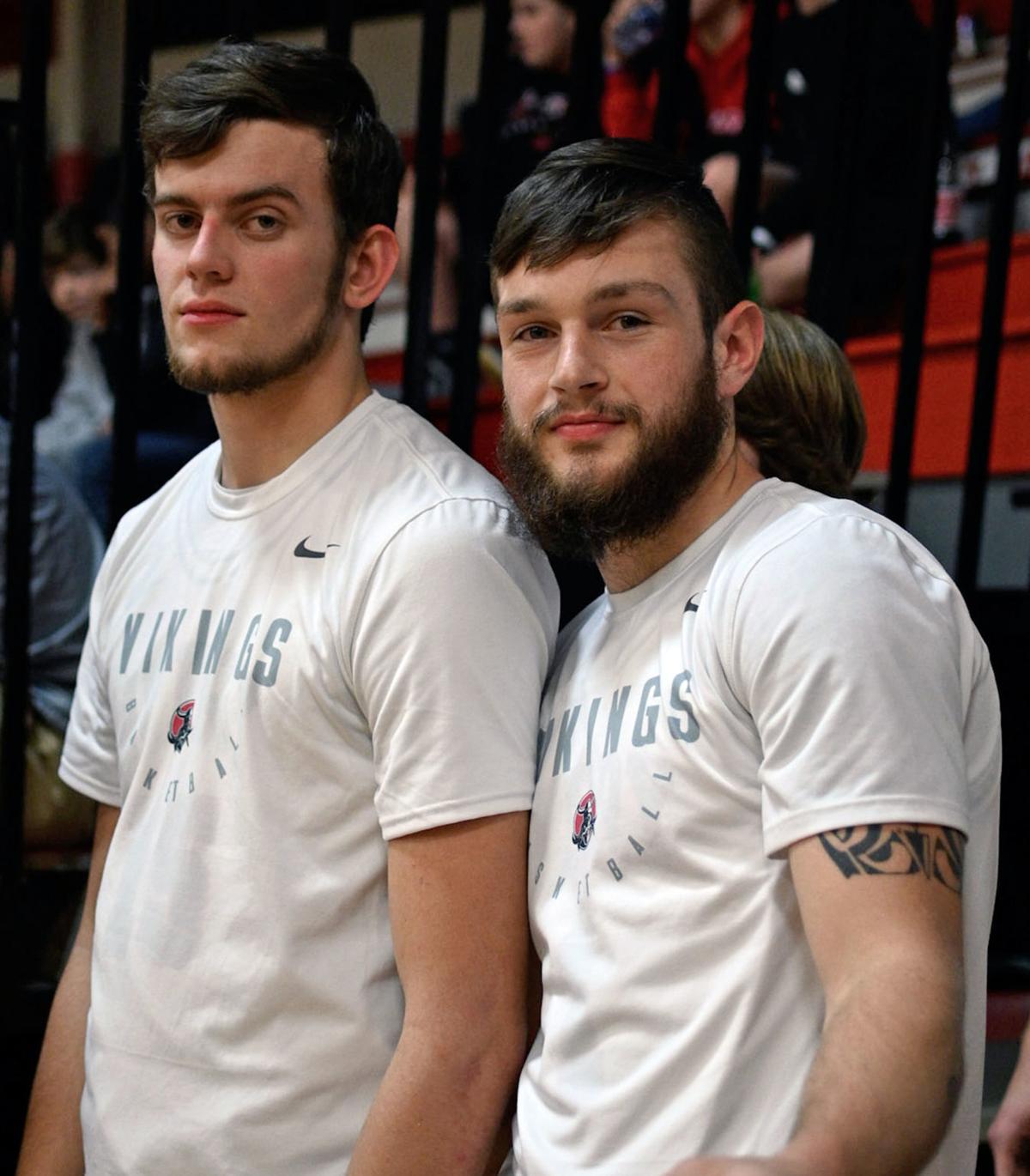 Avery’s pair of basketball seniors, Jonas Bowman and Jesse Jones, were recognized prior to their home game against Mitchell on Feb. 10 during Senior Night festivities. 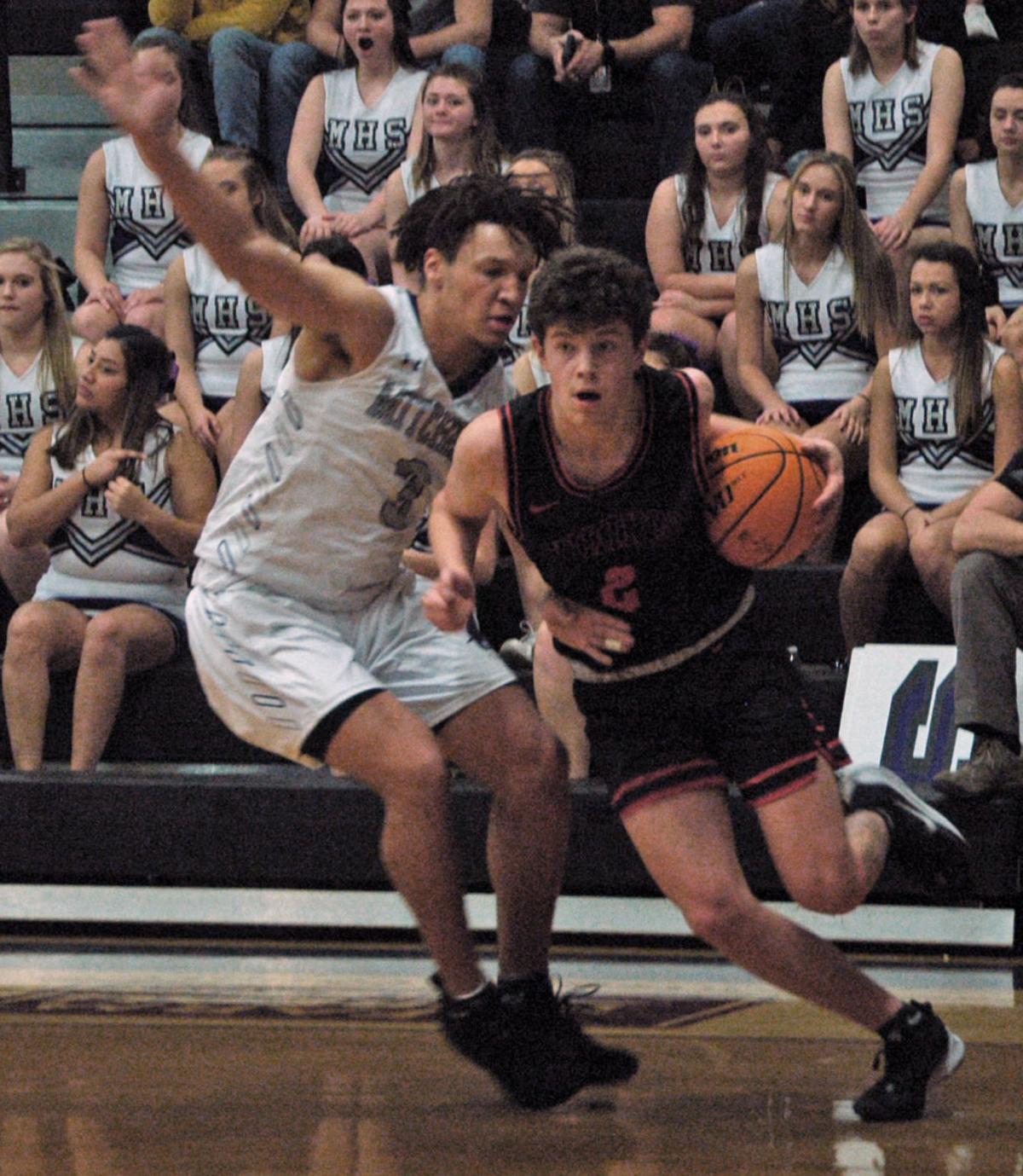 Avery junior Silas Barinowski drives baseline against Mitchell’s Caius Peterson in WHC Tournament action in Ledger on February 14. Barinowski poured in 50 points earlier in the week at home against the Mountaineers in a 110-106 Vikings loss in four overtimes.

Avery’s pair of basketball seniors, Jonas Bowman and Jesse Jones, were recognized prior to their home game against Mitchell on Feb. 10 during Senior Night festivities.

Avery junior Silas Barinowski drives baseline against Mitchell’s Caius Peterson in WHC Tournament action in Ledger on February 14. Barinowski poured in 50 points earlier in the week at home against the Mountaineers in a 110-106 Vikings loss in four overtimes.

For those in attendance for the final two home games of the Avery varsity boys basketball regular season, fans witnessed a great deal of free hardwood action, as the Vikings played a total of five overtimes in a period of approximately 24 hours, going four overtimes in an instant classic on Senior Night with Mitchell on Feb. 10, followed by an overtime barnburner that saw the Big Red pull out a hard-fought home win against Polk one evening later on Tuesday, Feb. 11.

The Vikings also opened Western Highlands Conference Tournament action last week with a first-round game at Mitchell on Friday, Feb. 14. The rematch was far from the close contest of four days earlier, as the Mountaineers seized control early in the second quarter and romped to a decisive home win over the Big Red.

NEWLAND — In one of the wildest and most seesaw affairs seen in Viking Gym, the Vikings and rival Mitchell Mountaineers played a memorable matchup that featured a 50-point performance by Avery junior Silas Barinowski, a combined 80 points by the teams in the overtime sessions alone, and unlikely heroes on both teams forcing extra basketball with clutch shots.

Prior to the game, the Vikings paid tribute to its pair of senior players, Jonas Bowman and Jesse Jones, for their contributions to the AHS program. As for the game itself, seven combined players fouled out by the end of the matchup, and the squads combined to sink 21 three-pointers, with Avery making 15 of the triples.

The contest was a nip-and-tuck contest throughout the marathon contest. Avery started strong and built a narrow 21-17 lead after one period behind nine points on three 3-pointers by Logan Gilliam, seven points from Barinowski and a pair of Trent Whitelock field goals. Mitchell countered with six points from Caius Peterson and four from Noah Pitman.

Offenses cooled somewhat in the second quarter, with Mitchell making the most of its opportunity in outscoring the Vikings 14-8 to take a narrow 31-29 advantage into halftime.

Mitchell scored the first six points of the third stanza to extend its lead to nine and force a Viking timeout early in the quarter, and the Vikings responded as Barinowski scored four field goals for 10 points in the frame and Whitelock added six points to pull the Big Red within 53-50 after three quarters.

Midway through the fourth quarter, a Zeus Ponder basket helped the Mountaineers rebuild a lead at 61-53, but the Vikings chipped away late in regulation, outscoring MHS 10-5 over a four-minute span to draw within a point at 66-63. A MHS technical foul with less than 30 seconds to play, and two subsequent Whitelock free throws brought Avery within a point.

Seconds later, with the game tied at 66, Mitchell’s Tyler McKinney drove and scored to give the visitors the lead, but Barinowski answered by being fouled on the in-bounds pass. The junior sank both free throws to tie the game and send it to overtime tied at 68 points apiece.

Midway through overtime, the Mountaineers again took control, leading 75-69 with 2:20 to play, but Avery again clawed back behind the hot-shooting Barinowski, who scored 11 points in the first overtime, including a pair of three-pointers. Trailing by three in the final half-minute of the session, Barinowski was fouled on a three-point attempt and made all three foul shots to knot the game at 82 and enter a second overtime.

The game became a battle of attrition as the third extra session transpired, as multiple players on both teams were called for their fifth personal foul and fouled out of the contest. Avery’s Whitelock, who scored 27 points, fouled out in overtime, leaving the scoring burden to Barinowski, who obliged in the third session with another nine points in the frame that eventually concluded with a 91-91 deadlock.

Unlikely heroes stepped up for both teams as the game wore on. David McCollum sank a jumper to put Avery on top in the closing seconds of the third overtime, only to see Mitchell’s Ty Pitman answer by connecting on a baseline jumper with defenders in his face as time expired to tie the game at 100, forcing the fourth overtime.

Although both clubs were playing portions of the final four minutes without multiple starters due to foul-outs, the game remained a one-possession affair throughout. Barinowski added four points in the final overtime for a game-high total of 50, but Ty and Noah Pitman combined for eight points in the period to push Mitchell over the top for the 110-106 win.

Besides Barinowski and Whitelock, Gilliam was the only other Viking in double figures with 11 points. Five MHS players scored double figures, with 23 points from N. Pitman and 22 points from Peterson. Ponder added 19 points, with 15 from Tyler McKinney and 11 from Jess Ledford.

NEWLAND — Less than 24 hours after one of the longest basketball games in conference history, the Vikings returned to the hardwood to host the Polk Wolverines to close the regular season schedule. Showing grit and heart, the Big Red dug deep within and found the necessary determination and execution to pull out a four-point overtime win.

Avery trailed 15-12 after one quarter, as Bowman and Gilliam scored nine of the Viking points. As the second quarter unfolded, the Vikings outscored the Wolverines 16-10 to take a 28-25 halftime lead. Barinowski scored five in the frame, while Dominique Carson scored six points in the half to lead Polk.

Polk found its shooting rhythm out of the locker room to open the second half, outscoring Avery 18-11 behind eight points from Bryson Edwards, who led the Wolverines with 25 points in the contest. AHS made only four field goals in the period, as PCHS rallied to lead 41-39 after three stanzas.

Avery trailed by as many as nine points with less than two minutes remaining before mounting a comeback, using an 8-0 scoring run capped by an offensive rebound and tip-in by Bowman to close the period and force overtime tied at 57-57.

In the four-minute overtime, Avery took control as the defense limited the Wolverines to a single basket. Barinowski scored four of his 20 points in the frame, with free throws late by Gilliam and Troy Hoilman to secure the Viking victory.

Bowman scored 12 for AHS in the win, with 11 points from Hoilman and eight points each from both Gilliam and Whitelock. Polk’s Edwards led all scorers with 25 points, with 14 points from Keyandre Thomas.

LEDGER — Avery opened the Western Highlands Conference Tournament with a rematch with Mitchell. Following the marathon game four nights earlier, expectations were that the teams would play another close matchup. Instead, Mitchell took control of the game in the second quarter and ran away from the Big Red in the second half for a lopsided win. Avery led early in the opening quarter behind a Whitelock three-pointer, but MHS responded as Peterson scored four baskets to help the Mountaineers take a 14-6 lead into the second quarter.

Mitchell’s momentum continued to snowball on the Vikings, as the Mountaineers poured in 27 second-quarter points. Whitelock scored five points in the quarter, with a pair of Bowman buckets, but Peterson added another seven points for MHS, along with 10 points from Noah Pitman and six points from Ponder to give the home team the 41-19 halftime lead.

The second half was not a pretty one for the Avery club, as a 26-point third-period explosion from the Mountaineers removed doubt early regarding the outcome of the contest. Avery trailed 67-31 after three quarters and were able to stave off the 40-point mercy rule in the second half before eventually suffering a 31-point defeat.

No Avery player reached double figures in the scoring column. Whitelock led the Vikings with eight points, with seven points from Barinowski, seven from Hoilman, six from Bowman, and five points each from Jack Crenshaw and James Harris. Mitchell’s Peterson led all scorers with 21 points.

The loss dropped Avery to 5-18 overall, with a 1-9 conference mark.