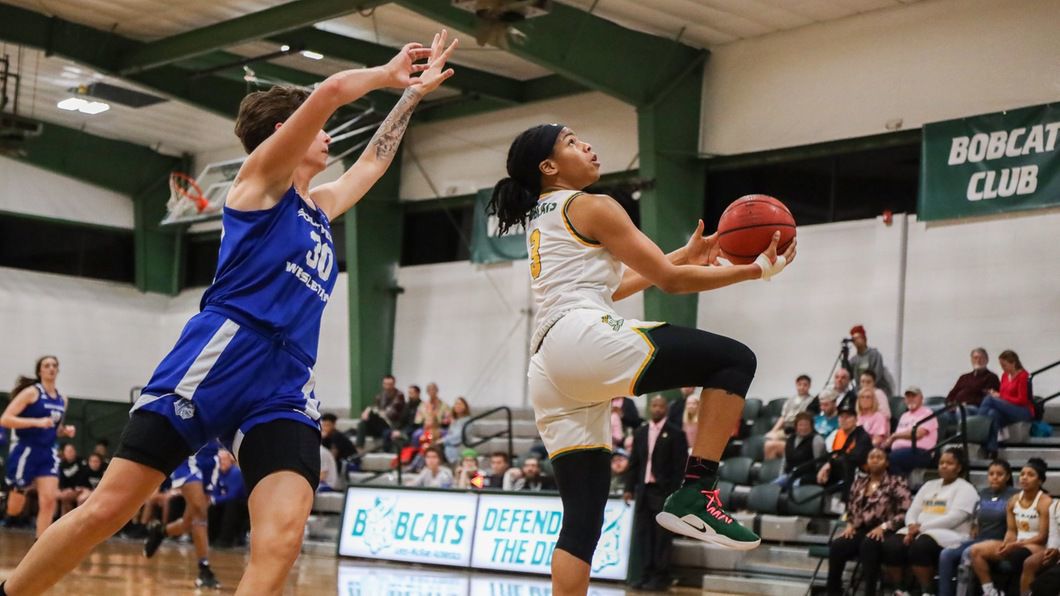 Makayla Smith lays in a shot for the Bobcats.

Makayla Smith lays in a shot for the Bobcats.

SALISBURY — The Lees-McRae College softball team opened its 2020 season Saturday, Feb. 15, with a pair of victories over Catawba by scores of 2-1 and 6-5. It marks the first time the Bobcats have started a season 2-0 since 2012.

Game One Recap – Lees-McRae started the 2020 season with a bang as Caitlyn Ray led the new campaign off with a solo home run to centerfield. Catawba would tie the score in the bottom of the second with a solo home run of its own. Following the two home runs, Lees-McRae and Catawba were held scoreless until the top of the seventh when Katie Robinson hit a double in the right center field gap to plate Sarah Beth Thomas to give Lees-McRae the lead back, 2-1. A scoreless bottom of the seventh gave Lees-McRae its first season-opening victory since 2012.

Charlsy Traylor picked up a complete-game victory in the circle for the Bobcats in game one. In her first game as a Bobcat, Traylor allowed one run on six hits while allowing two walks to go along with four strikeouts.

Game Two Recap – It looked through five innings of the second game of the day that the Indians would gain a split against the Bobcats. Catawba was able to build a 3-0 advantage going to the sixth. However, in the top of the sixth, the Bobcat bats woke up, totaling four runs on six hits to pull in front 4-3. The Indians would answer in the bottom of the sixth with a two-run home run to go back up 5-4. The Bobcats would have the last laugh, however, as they scored a pair of runs without a hit thanks to two walks and an Indian error to finish off the sweep, 6-5.

Offensively, six different Bobcats picked up hits in game two. Faith Cooke went 2-for-3 and drove in three runs to lead the offense. Addyson Ikard and Cassidy Coleman both went 1-for-4 and knocked in a run as well. In the circle, Cassidy Largen picked up the win after working seven innings allowing five runs on eight hits to go along with five strikeouts.

Lees-McRae will be back in action on Thursday, Feb. 20, with another non-conference doubleheader at Lincoln Memorial. First pitch for that doubleheader is set for 1 p.m.

BANNER ELK — The Lees-McRae College men’s basketball team fell to the University of Mount Olive on Saturday, Feb. 15, by a final score of 91-85. The Bobcats were led by Jerick Haynes who finished with 22 points.

The Bobcats and Trojans began the game in a frenzy with both sides scoring several fast break baskets. After falling behind, The Bobcats Jerick Haynes drove strong to the hoop for the layup to tie the score at 33. A few moments later, Kamil Williams knocked down a straight away three to put Lees-McRae on top, 39-38. The Trojans were able to respond and hit a three as time expired to take a 45-41 lead into halftime.

Mount Olive started the second half strong by extending their lead. Moments later, Sidney Dollar drove to the basket for two and cut the Trojan lead to three. Mount Olive would again respond by draining a series of three pointers to widen their advantage. Due in large part to the play of Jerick Haynes, Lees-McRae was able to cut the lead all the way back down to one with 43 seconds to play. From this point, it was all Trojans as they were able to knock down shots from the line and hang on to win, 91-85.

The Bobcats will return to action Wednesday, Feb. 19, when they face North Greenville at home. Tipoff from Banner Elk is scheduled for 7:30 p.m.

BANNER ELK — The Lees-McRae College women’s basketball team lost an overtime decision to the University of Mount Olive on Saturday, Feb. 15, by a final score of 63-62.

The Trojans jumped out to an early lead over the Bobcats, scoring the first seven points until a Destiny Johnson three got Lees-McRae on the board. Johnson’s three would be followed by another Bobcat triple from Jala Holloman, narrowing the deficit to one point. From this point, the Trojans began to pull away from Lees-McRae, using timely rebounding and finishing well around the rim. Makayla Smith did her part in the first half for the Bobcats, scoring six hard-earned points. The Trojans continued however to push ahead, leading 40-22 at the break.

Lees-McRae came out of the locker room on fire. The Bobcats were able to up their defensive intensity and began finding ways to put the ball in the hoop. Lees-McRae began chipping away at the lead throughout the third and fourth quarter and eventually found themselves tied at 56-56 with the Trojans. A half-court shot at the buzzer would not fall for the Bobcats and the two sides headed to overtime. Malikah Meyers stepped to the free-throw line and gave Lees-McRae a four point lead in overtime with 44 seconds to play. Unfortunately for the Bobcats, Mount Olive were able to mount a comeback and narrowly escape with the win, 63-62.

The Bobcats will return to action on Wednesday, Feb. 19, when they face North Greenville at home. Tipoff from Banner Elk is scheduled for 5:30 p.m.

With economic concerns growing, Moos ramps up consideration of alcohol at Memorial Stadium