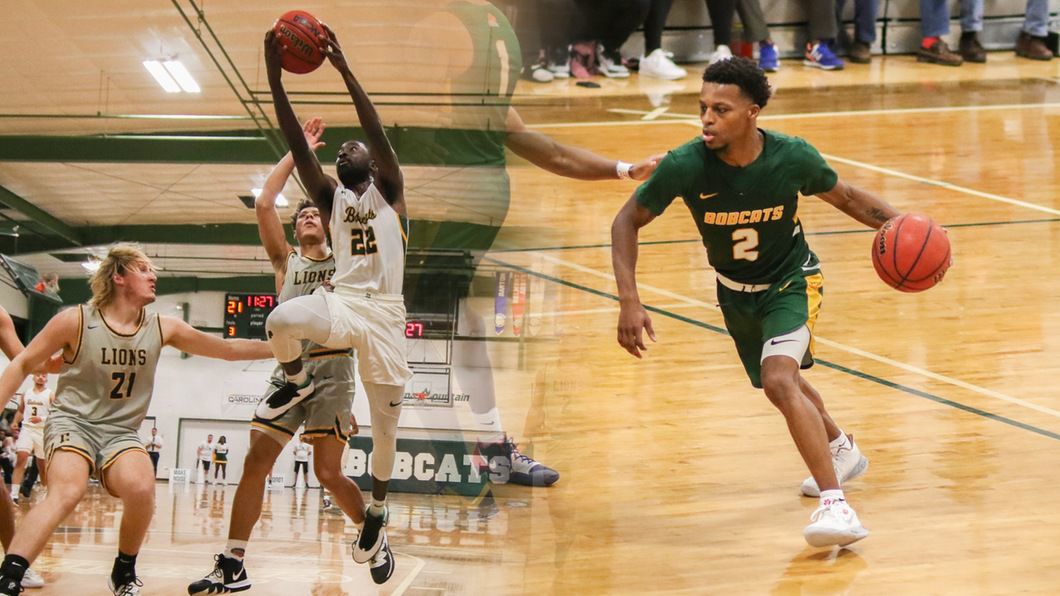 Jason Saintizaire and Quay Kimble earned All-Conference Carolinas honors for their performances for the Bobcats men’s basketball team this season.

Jason Saintizaire and Quay Kimble earned All-Conference Carolinas honors for their performances for the Bobcats men’s basketball team this season.

Kimble was perhaps Lees-McRae’s most consistent player all season long. The junior guard started all 29 games for the Bobcats this season and led the team in minutes played (908), three-pointers made (77), free throw percentage (90.4), assists (76) and steals (63). His free-throw percentage of 90.4 set a new single season record for the category. In addition to leading the team in several categories, Kimble had several standout individual game performances as well. He netted a career-high 38 points in a thrilling double-overtime win at Southern Wesleyan in mid-December and went 10-for-12 from the field in a 30-point outing at North Greenville in early February. Perhaps the highlight of the season for Kimble was his eclipsing the 1,000-point mark. He is just the ninth player in Lees-McRae men’s basketball history to reach that milestone.

Saintizaire, meanwhile, closed out his collegiate career on a stellar note. The senior from Lake Worth, Fla., was an efficient scorer from the field in his final college season, as he shot 60.1 percent from the field and a 51.4-percent clip from three-point range. He also provided a spark to Lees-McRae defensively, as he finished tied for second on the team with 12 blocks. Saintizaire was especially good in the season’s second half was he totaled six 20-plus-point performances. His top performance came against rival King at the end of January where he scored a career-high 35 points in 25 minutes of action on a 13-for-18 effort from the field, which included seven three-pointers made.

CHARLOTTE – The Lees-McRae College softball team picked up a pair of victories on Saturday, March 7, in Charlotte because of a pair of solid pitching performances. First, the Bobcats shut out Queens by a score of 6-0 before picking up another win over Frostburg State, 4-1, later in the day. With the pair of wins, the Bobcats improve to 8-6 on the season.

Queens Recap – Lees-McRae would use a pair of three-run innings to go along with a stellar outing from pitcher Charlsy Traylor to shut out the Royals by a score of 6-0 in its first game of the day. It marks the first shutout win for the Bobcats this season.

Offensively, most of the Bobcat offense came from the top six slots in their batting order. Cora Detter went 3-for-4 with two RBI and two runs scored, while Julie Gast also had a multi-hit day with a 2-for-3 effort with two runs driven in as well.

Traylor, however, turned in her first shutout in a Bobcat uniform against the Royals in the game. The junior pitcher worked around five hits and three walks to keep Queens off the scoreboard. Traylor, who picked up a pair of strikeouts in the win, improves her record to 5-2 with the victory.

Frostburg State Recap – The Bobcats used a combination of a season-high 11 hits and yet another stellar pitching performance to pick up their second win of the day as they defeated Frostburg State, 4-1.

Much like in their first game of the day, the Bobcats got a pair of multi-hit outings from a pair of players to spark their offense. However, it was from two different players. Hitting from the leadoff spot, Caitlyn Ray went 3-for-4 with one run batted in, while Hannah Foster went a perfect 3-for-3 with a double and one run scored.

Largen snapped a string of rocky outings as she tossed all seven innings for Lees-McRae. The junior pitcher allowed just one earned run on six hits to go along with six strikeouts in the win. Largen’s record is improved to 3-3 with the victory.

SPARTANBURG, S.C. – Lees-McRae College women’s basketball player Destiny Johnson was named to the All-Conference Carolinas Third Team at the league’s banquet on March 6 in Spartanburg, S.C. It marks the third consecutive season that the Bobcats have had at least one All-Conference player.

As a sophomore, Johnson stepped up into a prominent role for the Bobcats during the 2019-20 season. The Lincolnton native not only played in all 30 games, but she also started all 30 for Lees-McRae. Johnson led the Bobcats in minutes played (961), field goals made (148), points scored (383), defensive rebounds (101) and steals (52).

Johnson reached double figures in 21 of Lees-McRae’s 30 games this season. Her top scoring outing of the season came on February 22 where she netted a career-high 31 points at Chowan. Johnson also grabbed a career-high 10 rebounds in a Bobcat win over Emmanuel in mid-January.

As Packers ready — virtually — for Year 2 of Matt LaFleur's offense, will odd offseason stunt its growth?

Offseason Outlook: Broncos will have new kicker, and maybe a new punter in 2020