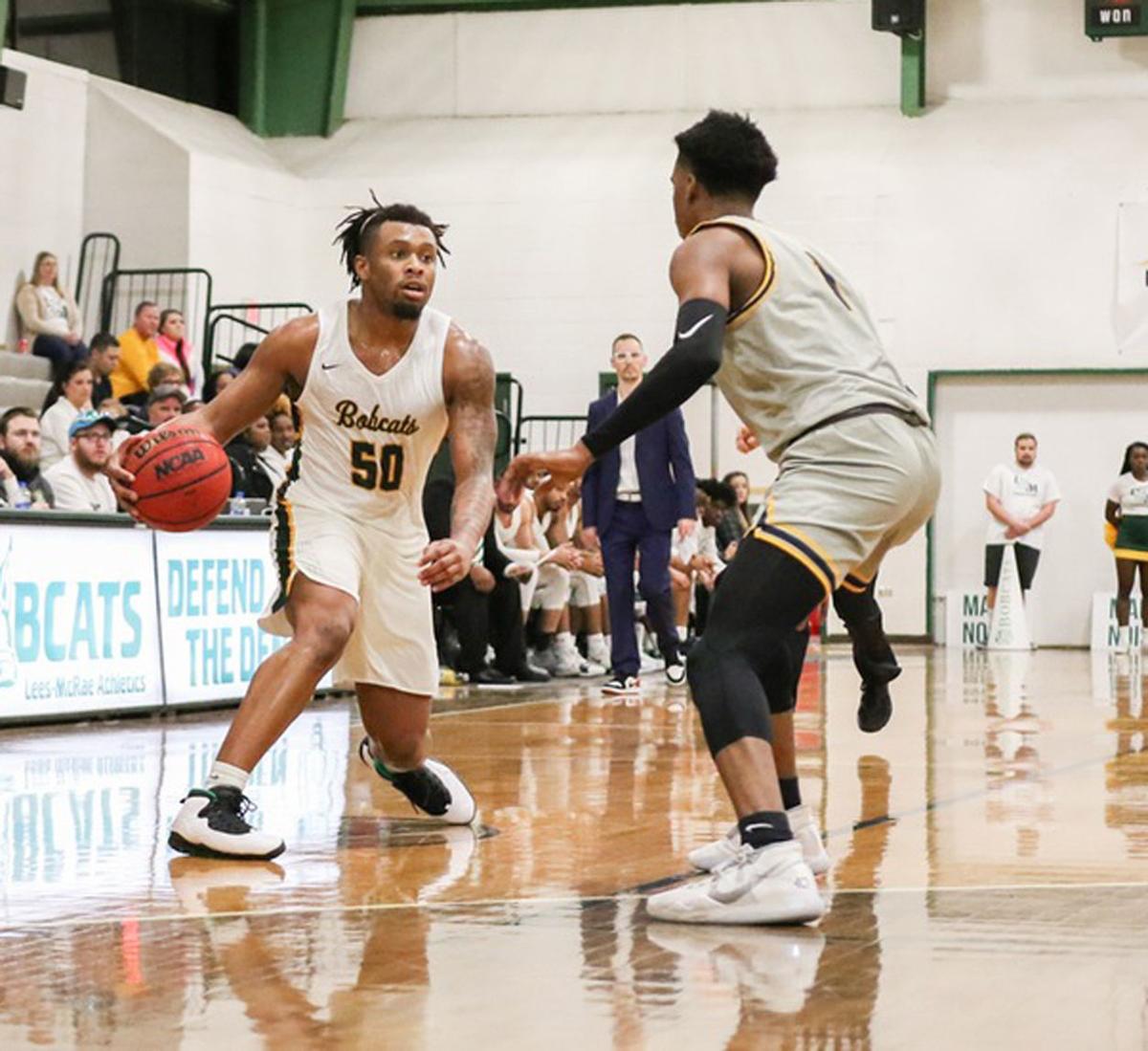 Bobcats grind out 79-74 win at Chowan

MURFREESBORO— The Lees-McRae College men’s basketball team picked up its second straight win Saturday, Feb. 22, as it downed Chowan by a score of 79-74 on the road. The win improves Lees-McRae’s record to 18-9 overall and 11-8 in conference action.

It took both teams a bit of time to get their respective offenses rolling. Lees-McRae was first to do so as it built a 14-point lead on the Hawks with a little less than four minutes to play in the first half. Chowan, meanwhile, was able to close the gap a bit going into halftime closing the first half on an 8-0 run to make it 42-36 Bobcats at the break.

Chowan would continue its comeback attempt when the two teams returned for the second half. The Hawks eventually took the lead with 17:15 to go with a made free throw, 45-44. The two teams would battle for the lead for the remainder of regulation. Chowan had a 74-73 lead on Lees-McRae with 1:29 to go but 6-0 Bobcat run on the back of two made free throws each from Kamil Williams and Jerick Haynes, to go along with a layup from Williams, finished off the 79-74 Lees-McRae win.

Lees-McRae’s 79 points were the lowest for the team this season in a game it has won. Williams finished the night with a team-high 17 points. Quay Kimble added 13 and Haynes added 11 to round out the double figure scorers for the Bobcats.

BANNER ELK – The Lees-McRae College men’s volleyball team picked up its first Conference Carolinas victory of the season on Saturday, Feb. 22, at Williams Gymnasium as it swept Limestone College (25-18, 25-23, 25-21). The victory not only improves Lees-McRae’s record to 2-9 overall and 1-4 in league action, but also marks the team’s first win over Limestone since 2013.

First Set – Lees-McRae began the match with perhaps its best offensive set of the season so far. As a team, the Bobcats attacked the Limestone defense at a .500 clip with 16 kills on 28 attacks with just two misfires. The hot-hitting Bobcats led the Saints by as many as eight points before settling for a 25-18 victory in the first set.

Second Set – In the most competitive set of the match, both teams held turns with the lead and made runs to seize momentum at different points. A late 5-1 run by the Saints in the later stages of the frame tied the score at 22. Limestone, however, committed a pair of attack errors and a service error following that point to give the Bobcats a 2-0 lead, 25-23.

Third Set – Lees-McRae was able to finish off its first 3-0 victory of the season thanks to a late charge at the end of the frame. Limestone was able to tie the score at 21-21 before the Bobcats tallied four straight points with an ace from Ethan Gardner to seal the victory.

Lees-McRae was led by the trio Max Kuntz, Drew Sims and Bradley Peters. Kuntz finished with eight kills on 16 attacks with just one error for a .438 attack percentage. Sims led the team in kills with 11 and a .391 hitting percentage to go with six digs. Finally, Peters logged five kills on eight attacks to go along with 28 assists and six aces. As a team, the Bobcats attacked at .300 clip, which is their best mark in a match since Feb. 23, 2018 at Barton when it hit .354.

The Bobcats will be back in action at 7 p.m. on Wednesday, Feb. 26, when they host King University in another league match.

The first 20 minutes of action were pretty tight between the Bobcats and Hawks in nearly every statistical category. The difference in the first half proved to be Chowan’s ability to knock down a few more shots from beyond the arc and crashing the glass. The Hawks out-rebounded the Bobcats 22-12 in the first half and knocked down six three-pointers compared to two for Lees-McRae. With those two factors working in Chowan’s favor, it took a 34-28 lead into the halftime break.

Lees-McRae would continue to chip away at Chowan’s advantage in the second half. After foul trouble limited her minutes in the first half, Destiny Johnson came back in the second half and scored 24 of Lees-McRae’s 34 points to spark the Bobcats to come all the way back and force an overtime period between the two teams. The extra period between the two teams was not filled with a ton of offense but Chowan was able to knock down five of seven free throws to go along with a pair of field goals to edge the Bobcats, 71-68.

Johnson finished the afternoon with a career-high 31 points against the Hawks. The Lincolnton native also added a team-high six rebounds in the contest. Freshman Makayla Smith was the only other Bobcat in double figures, finishing with 12 points on a 4-for-8 effort from the field.

Lees-McRae will closes its regular season this week when it visits Emmanuel, with hopes still alive to qualify for the conference tournament.