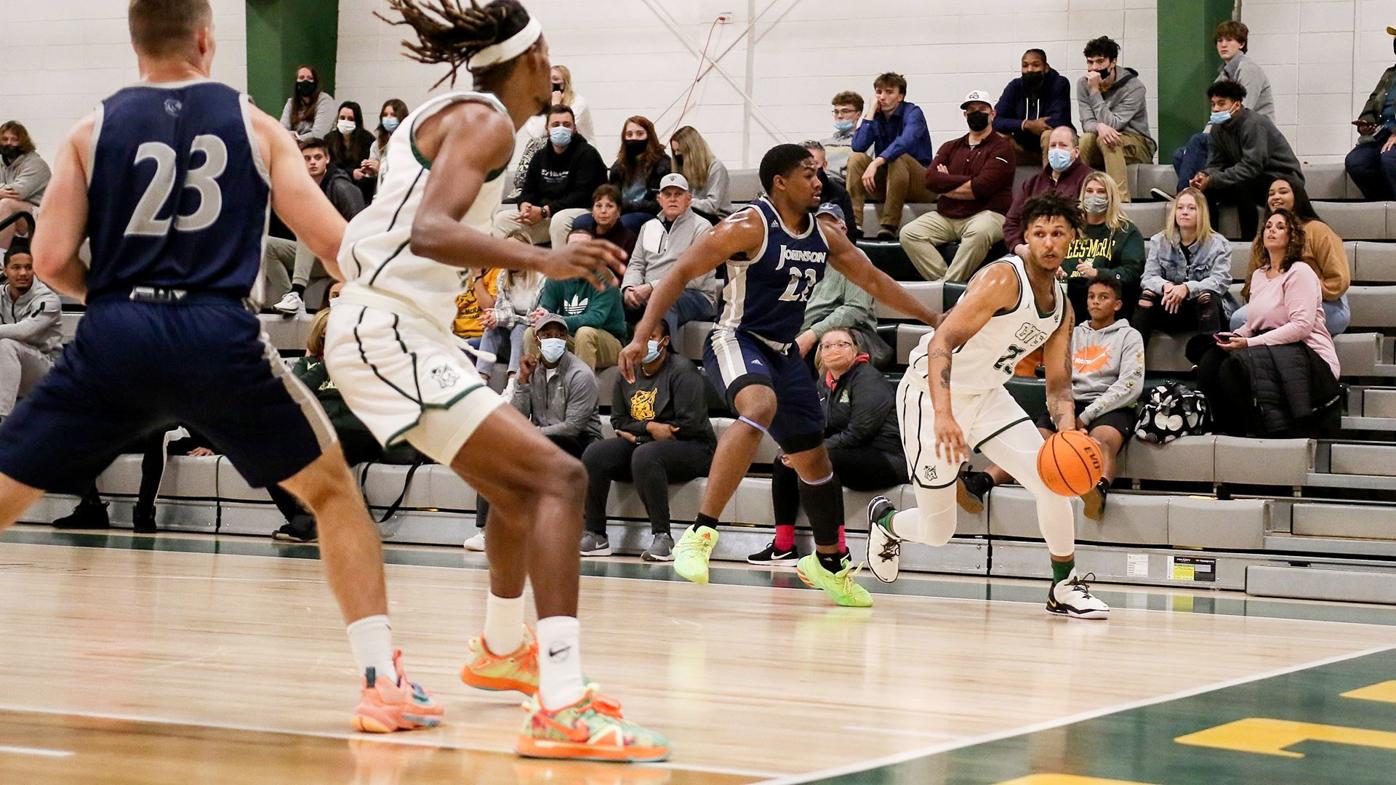 Drew Gardner scored a game-high 18 points and added a career-high 13 rebounds in LMC’s win over Lenoir-Rhyne.

Drew Gardner scored a game-high 18 points and added a career-high 13 rebounds in LMC’s win over Lenoir-Rhyne.

HICKORY – Drew Gardner (Myrtle Beach, S.C./Socastee) notched his fifth career double-double with a game-high 18 points and a career-high 13 rebounds, while Justin Nichelson (Boynton Beach, Fla./Palm Beach Atlantic) and Jaylin Stewart (Petersburg, Va./Bryant & Stratton) chipped in 17 and 14 points off the bench, respectively, as the Lees-McRae men’s basketball team rallied from a double-digit second-half deficit en route to a thrilling 84-81 win over host Lenoir-Rhyne in the non-conference action on Saturday, Nov. 20.

Gardner finished 7-of-11 from the field and 3-of-7 from behind the three-point line, while chipping in an assist and a block in the contest.

Nichelson ties his career-high in points with a pair of 3-pointers to go along with eight rebounds, while Stewart tallied three assists.

Lees-McRae sprinted out of the gates by scoring the first seven points of the contest but failed to maintain the momentum as Lenoir-Rhyne used a 19-7 run to hold a 45-38 halftime advantage.

After the Bears extended the lead back to 57-47 with 13:35 remaining, the Bobcats slowly chipped away at the lead until McConnell knocked down two free throws to trim the lead to 79-78 with less than two minutes to play.

A pair of clutch free throws by Nichelson extended the deficit back to 84-81, while a last-second heave by Lenoir-Rhyne hit the side of the rim to clinch the Bobcat victory.

Lees-McRae held a 42-38 edge in bench production and a 42-32 advantage in rebounding en route to an 11-6 lead in second-chance points.

P.J. Joseph added 11 points and six rebounds off of the bench.

McCray, a senior business administration, won the 200 back with a time of 1:56.10, while also teaming up with Chase Davis, Cooper Gobble, and Caleb Eidson to finish second in the 400-free relay (3:15.31) in the dual meet on Saturday.

HENDERSONVILLE – Mike Stocker won the CX Men’s Collegiate A race on Nov. 21 to go along with a fourth-place finish in the same race on Nov. 20 to finish second overall in the Southeastern Collegiate Cycling Conference Men’s A overall standings, while Elias Dietrich and Riley Gallagher both posted win in their respective CX Collegiate B races, to lead the Lees-McRae men’s and women’s cycling teams at the NCCX – SECCC/ACCC Dual Conference Championships this weekend.

Stocker opened the weekend by finishing fourth in the CX Men’s Collegiate A race on Saturday, followed closely behind by fellow Bobcats Shay Wright in fourth and David Kahn in 15th.

Dietrich started the weekend by crossing third in the CX Men’s Collegiate B race, with Alex Trifunovic finishing fourth overall.

Stocker improved on his fourth-place finish on Saturday by winning the CX Men’s Collegiate A race on Sunday to earn himself a second-place finish in the overall conference standings.

Kahn crossed next for the Lees-McRae cycling team, finishing 11th, followed by Wright in 12th and Chase VanDuersen in 14th. Gallagher closed out the weekend by winning the CX Women’s Collegiate B race for the second consecutive day. Dietrich claimed the victory in the CX Men’s Collegiate B race, while fellow Bobcat Trifunovic crossed third overall.

The Bobcats will next compete in the Salisbury on Saturday, Dec. 4, in the team’s final tune-up before competing in the Collegiate Cyclocross National Championships in Wheaton, Ill., on December 9 and 10.