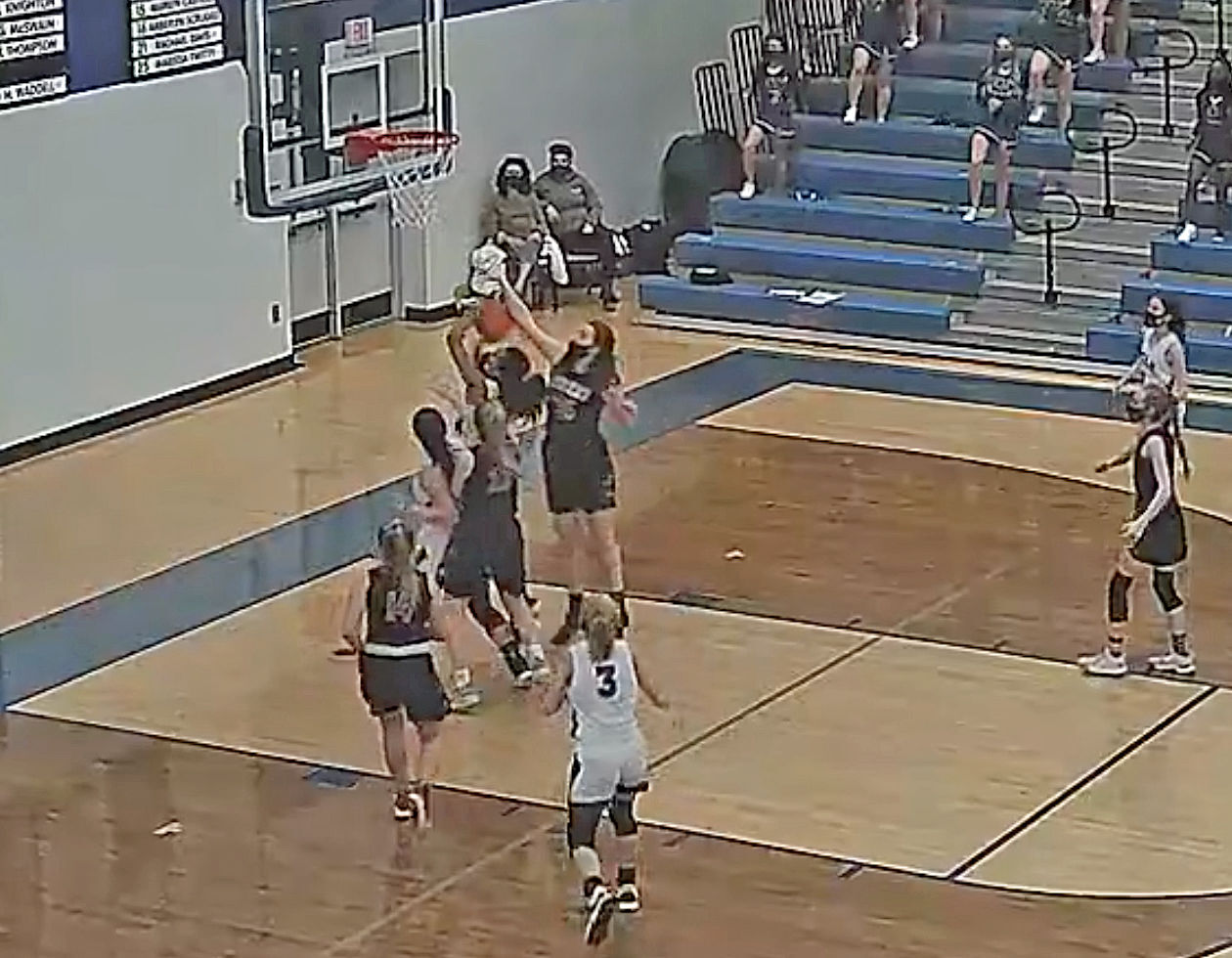 Avery’s Addie Beck blocks the shot of Polk’s Marissa Twitty in the closing seconds of the Lady Vikings’ 34-30 comeback win over the Lady Wolverines in Columbus on Feb. 13. 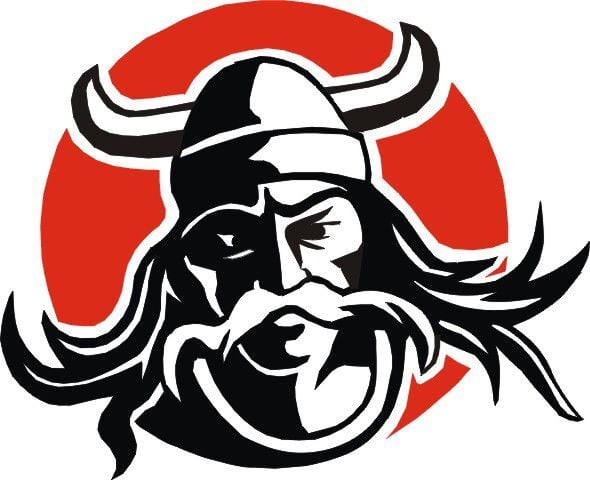 The Avery Lady Vikings earned a pair of conference wins last week to improve to 8-2 overall for the season, and 6-2 in WHC play.

Avery’s Addie Beck blocks the shot of Polk’s Marissa Twitty in the closing seconds of the Lady Vikings’ 34-30 comeback win over the Lady Wolverines in Columbus on Feb. 13.

The Avery Lady Vikings earned a pair of conference wins last week to improve to 8-2 overall for the season, and 6-2 in WHC play.

Aside from teams named Mitchell or Mountain Heritage, the Avery Lady Vikings have been at times both resilient and strong, having both routed foes and staged heart-stopping comebacks to earn 10 victories so far this season.

Last weekend, the Big Red was forced to travel to play conference road contests on consecutive days, taking on the Warlassies of Owen on Friday, Feb. 12, and venturing to Polk County the following afternoon on Saturday, Feb. 13.

SWANNANOA — Although love might have been in the air for Valentine’s Day weekend, there is rarely any love lost with the Warlassies and Lady Vikings tangle on the hardwood. Owen sought to earn a victory for its seniors on Senior Night, while the Lady Vikings were seeking to rebuild momentum following a setback at Mountain Heritage the previous Saturday.

Through the opening eight minutes, the Lady Vikings asserted its dominance on the floor, as its tall frontcourt wreaked defensive havoc on the shorter Owen club in the paint by altering shots and securing rebounds. The offense also clicked early with a pair of baskets by center Addie Beck, a pair of baskets and free throws from senior Reagan Hughes, and a pair of three-pointers from teammate Alexis Stines that pushed Avery to a 20-7 lead after one period.

In the second quarter, the AHS defense was downright stingy, holding Owen to just a Sarah Kahlil basket and a single free throw. While the defense held things down, the offense went about the business of continuing to pad its lead. Cora Hollifield knocked down a pair of baskets, with another two field goals from Beck to help Avery take a commanding 30-10 lead into halftime.

The pace considerably slowed down on the offensive end of the floor for both teams, as each school only managed three baskets in the third quarter. Beck scored six of Avery’s eight points in the frame, as Avery maintained its 20-point lead at 38-18 entering the fourth quarter.

Exhibiting its ability to close out an opponent as it has for much of the regular season, the Big Red kept the foot on the gas pedal to pull away. Five additional points from Stines in the final frame sparked the offense, while Owen could only manage two baskets over the final eight minutes of play as the Lady Vikings returned to its winning ways.

COLUMBUS — In the first encounter earlier this season in Newland between Polk and Avery, the Lady Wolverines opened up a double-digit second-half lead, only to see the Lady Vikings stage a furious comeback in the waning minutes to emerge with a win. The script for how the rematch between the schools on Saturday, Feb. 12, played out was eerily similar to the first encounter, however.

Again the Lady Wolverines played a strong third quarter to build a double-digit lead over Avery entering the final eight minutes of play, only to see the Lady Vikings repeat its rallying effort of the first contest, rolling up 20 points in the final quarter while holding Polk to only four in the frame to escape with the four-point win.

With a quick turnaround for both teams following games the previous night, each team started slowly out of the gate. Avery mustered only a pair of Reagan Hughes baskets and two Addie Beck free throws to account for its scoring in the first quarter. Polk faired just one point better, as Marissa Twitty paced Polk with five of the club’s seven points in the period for a 7-6 lead after one quarter.

Compared to the first-quarter offense, the second quarter was a near standstill, with defense dominating the floor and open looks hard to come by. Avery failed to score a single basket in the second period, managing only three Hughes free throws for the eight-minute stretch. Avery managed to stay close, however, as Polk fared little better on its offensive end, with AHS smothering the Lady Wolverines to allow just two scores in the quarter, leaving the home team with an 11-9 halftime lead.

Given the play during the first half, it appeared evident that the contest would continue to be a defensive struggle for the second half, but both teams found their respective shooting touch, albeit during different stretches of time.

PCHS continued to stymie the Avery offense, allowing only six points in the frame, five of which ccming from leading scorer Hughes. The Lady Wolverines offense found another gear however, as Kaylin Jenkins sparked Polk by scoring all eight of her points for the contest during the third quarter, helping PCHS to surge ahead by a 26-15 score entering the fourth quarter.

Needing another Herculean effort to get out of the hole and avoid a third conference defeat, Avery dug deep within itself and saved its best basketball for last. Amping up defensive intensity to create additional possessions, Avery clamped down on Polk to hold it to just four points for the remainder of the game. Emree Hoilman initially sparked the comeback with a three-pointer, followed by a Stines basket to narrow the margin to five at 26-21. Trailing by five points midway through the stanza, Avery then utilized a 9-2 scoring run over a span of the next four minutes gave the Big Red its first lead since early in the first half at 29-28 with 2:52 remaining.

After Polk regained the lead at 30-29, Beck knocked down a pair of foul shots to give Avery the lead for good at 31-30 with 2:28 to play. The score remained unchanged until a Cora Hollifield free throw with 35 seconds to play which pushed the Lady Viking lead to a pair at 32-30.

With 22 seconds to play, Polk took timeout and set up a game-tying play. Twitty found her way inside and looked to score, only to be turned away by a block from Beck.

Stines was subsequently fouled and sank both free throws to account for the four-point victory.

Hughes led Avery with 11 points, with six points each from Hollifield and Stines, and four from Beck. Twitty led Polk with nine points.

The matchup in Columbus was the final regular-season conference contest between the two schools, as all signs point to Polk leaving the WHC in realignment beginning with the 2021-22 school year.

Avery improved to 8-2 for the season, with a 6-2 conference record and sole possession of third place in the WHC standings. Avery was scheduled to complete its regular season schedule this week by taking on Mitchell at Viking Gym for Senior Night, as well as host the Lady Cougars of Mountain Heritage on Feb. 17 in a make-up game from earlier this season.