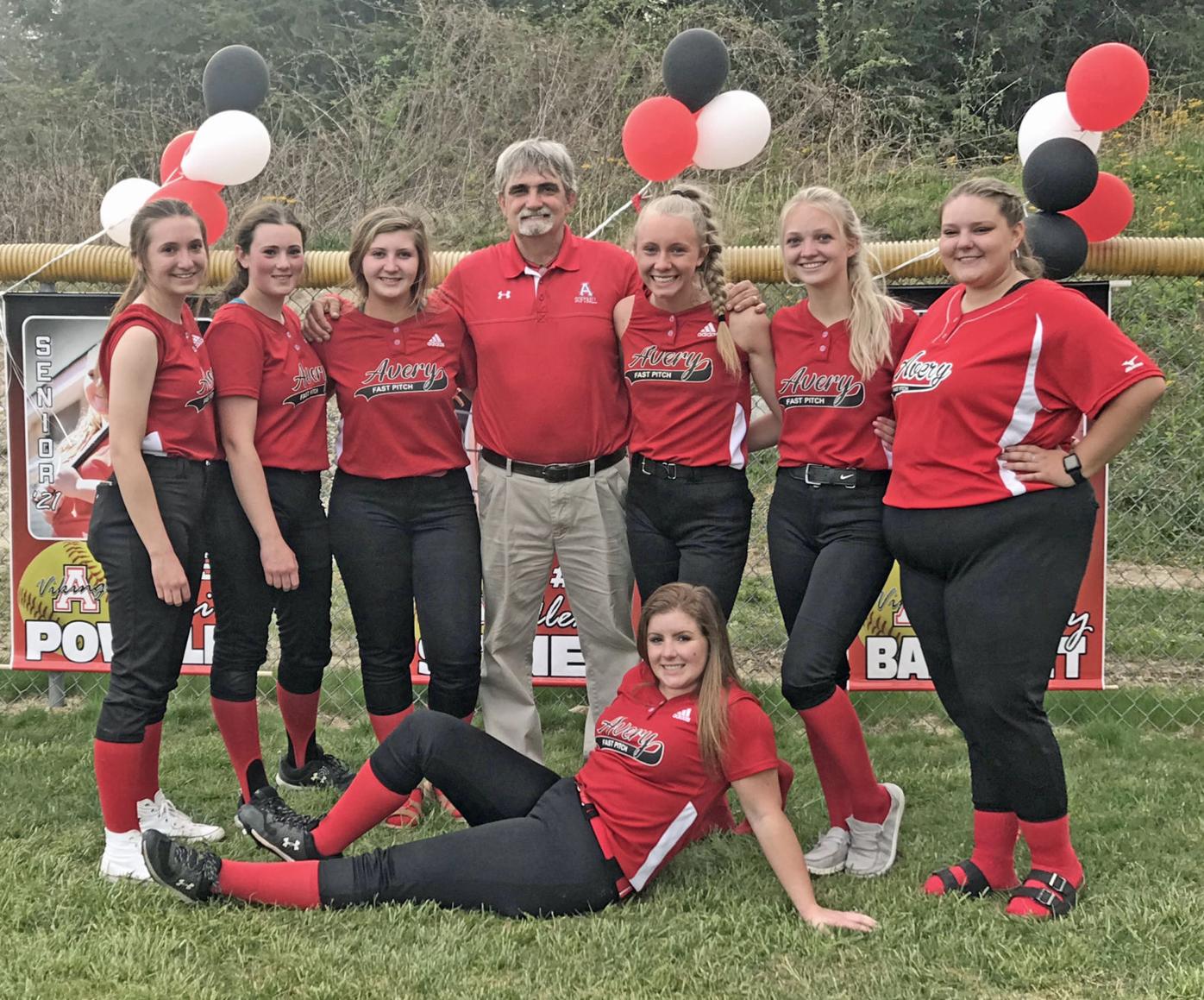 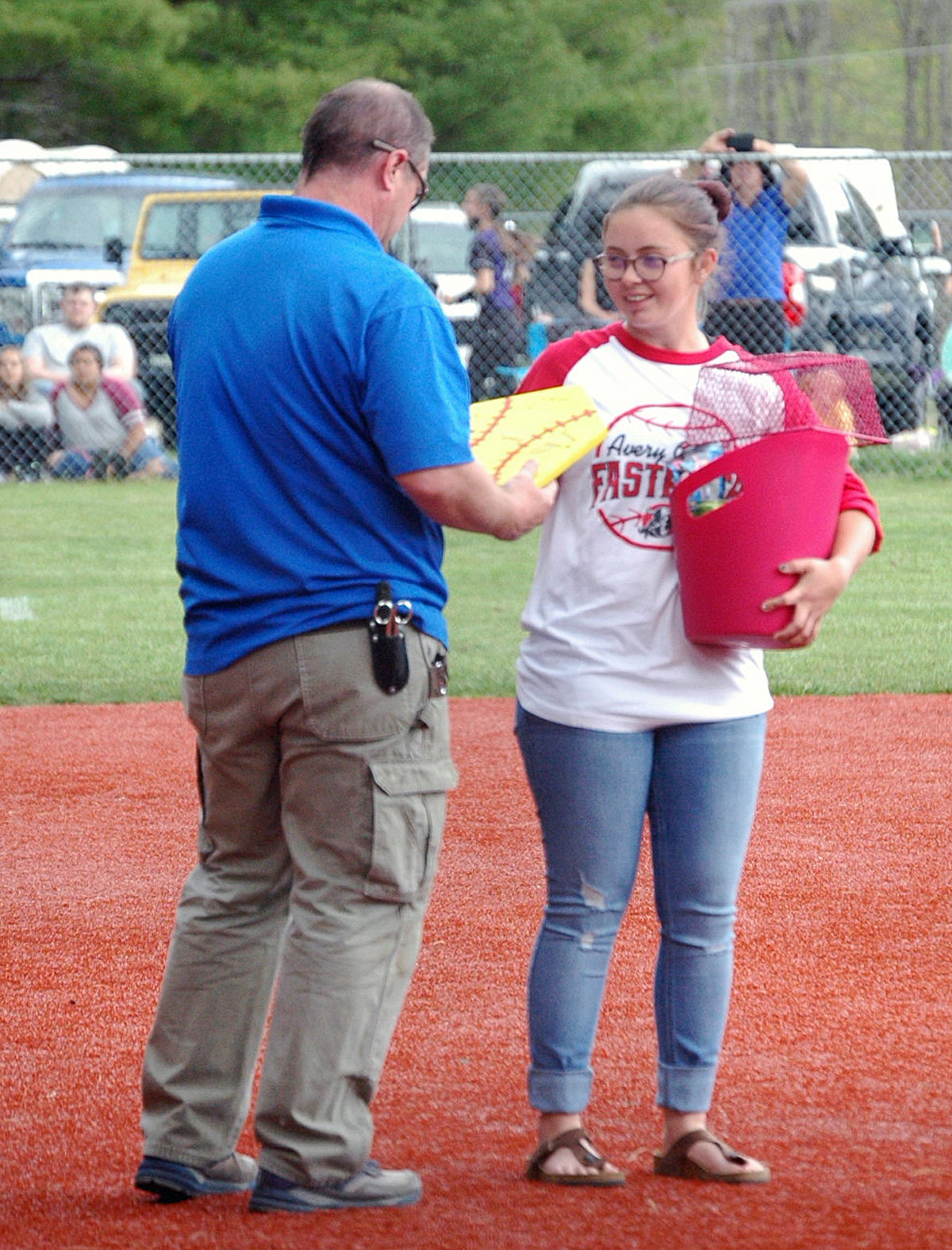 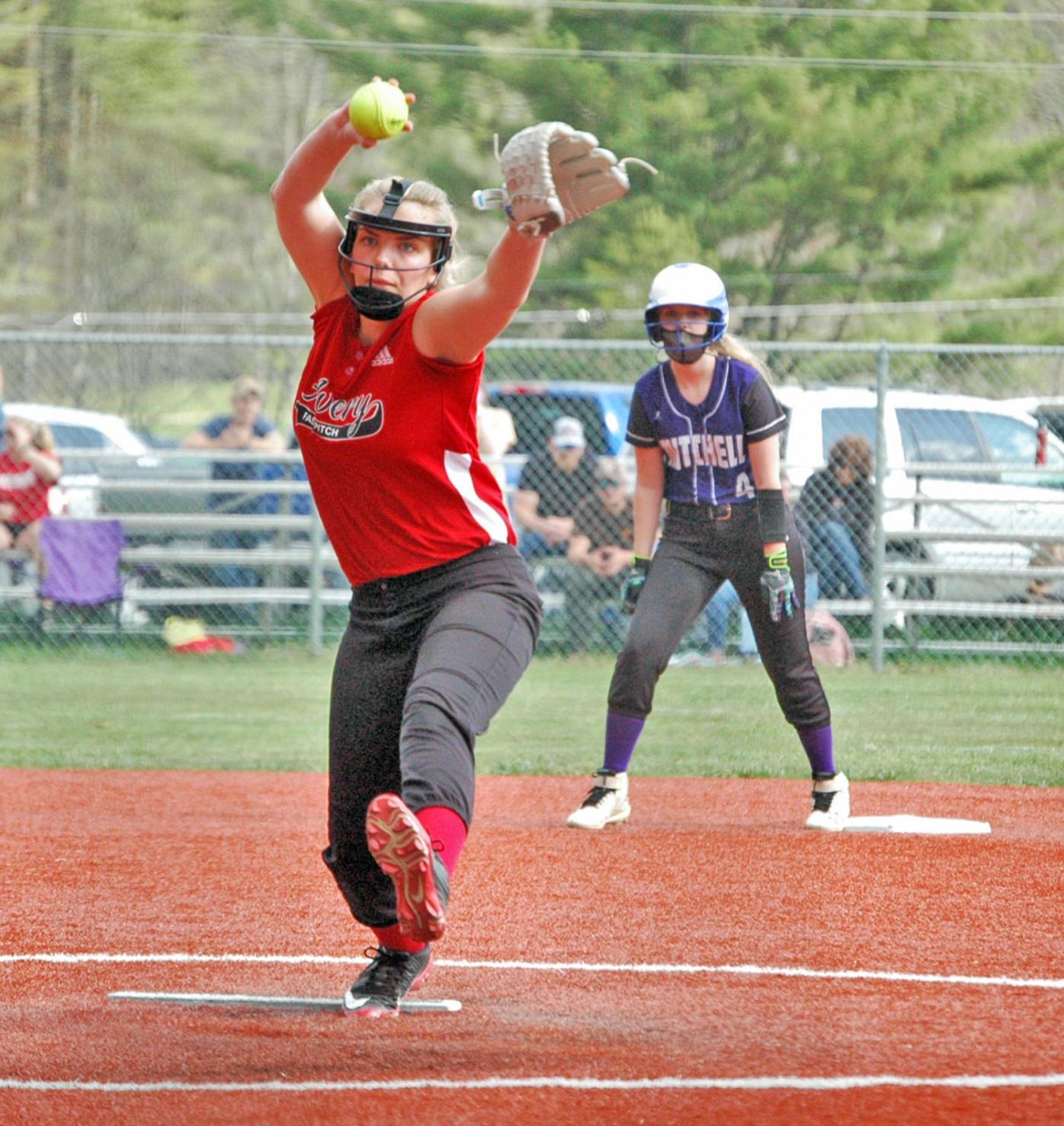 Kelli Burleson delivers a pitch to the plate with Mitchell runner Allie Johnson on second base during last week’s home finale at Viking Field. 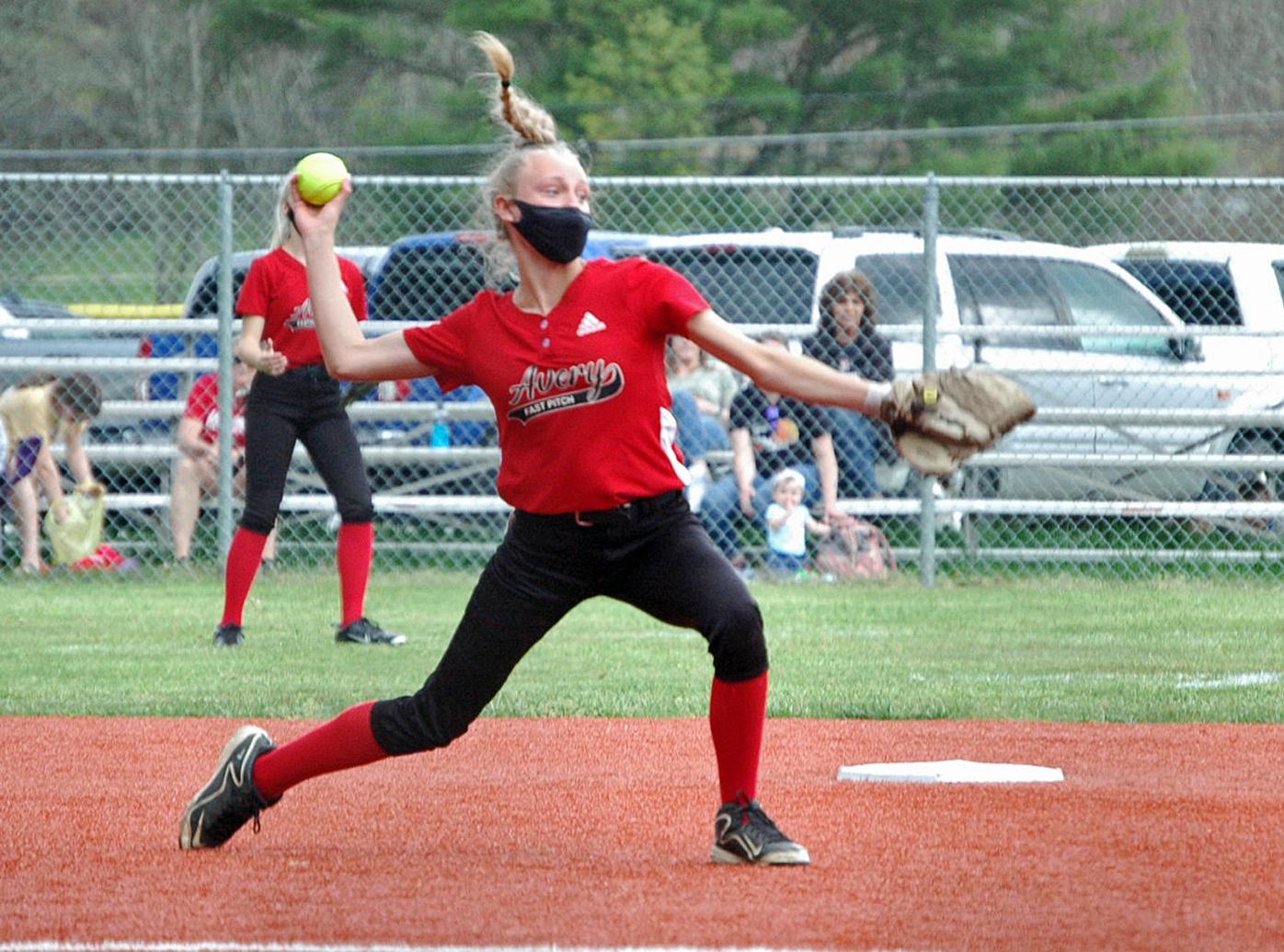 Avery senior softball shortstop Alexis Stines throws to first for an out during the Lady Vikings’ home finale against Mitchell. 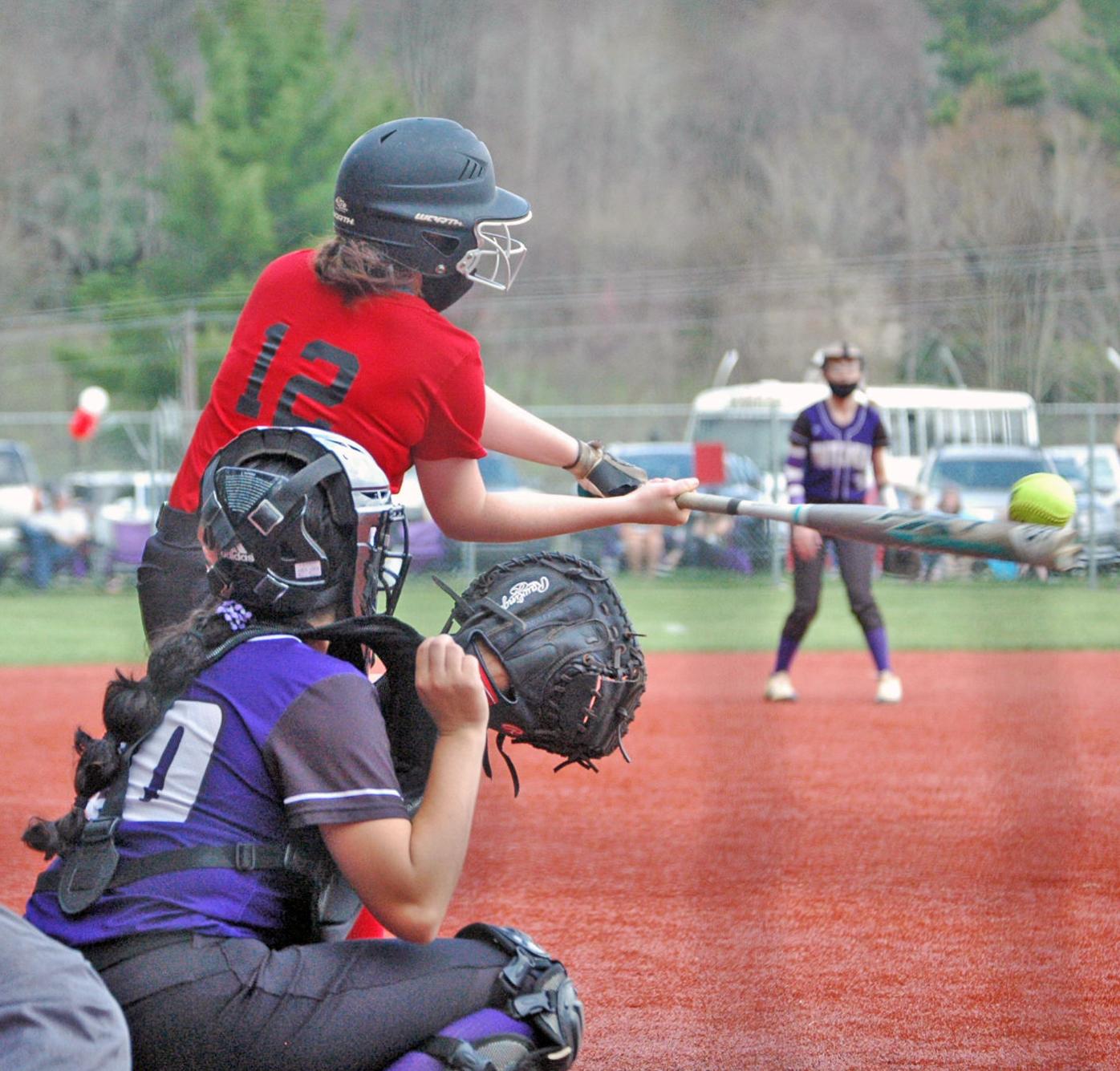 Molly Shell connects for an RBI hit in Avery's 8-6 loss to Mitchell at Viking Field on April 28. 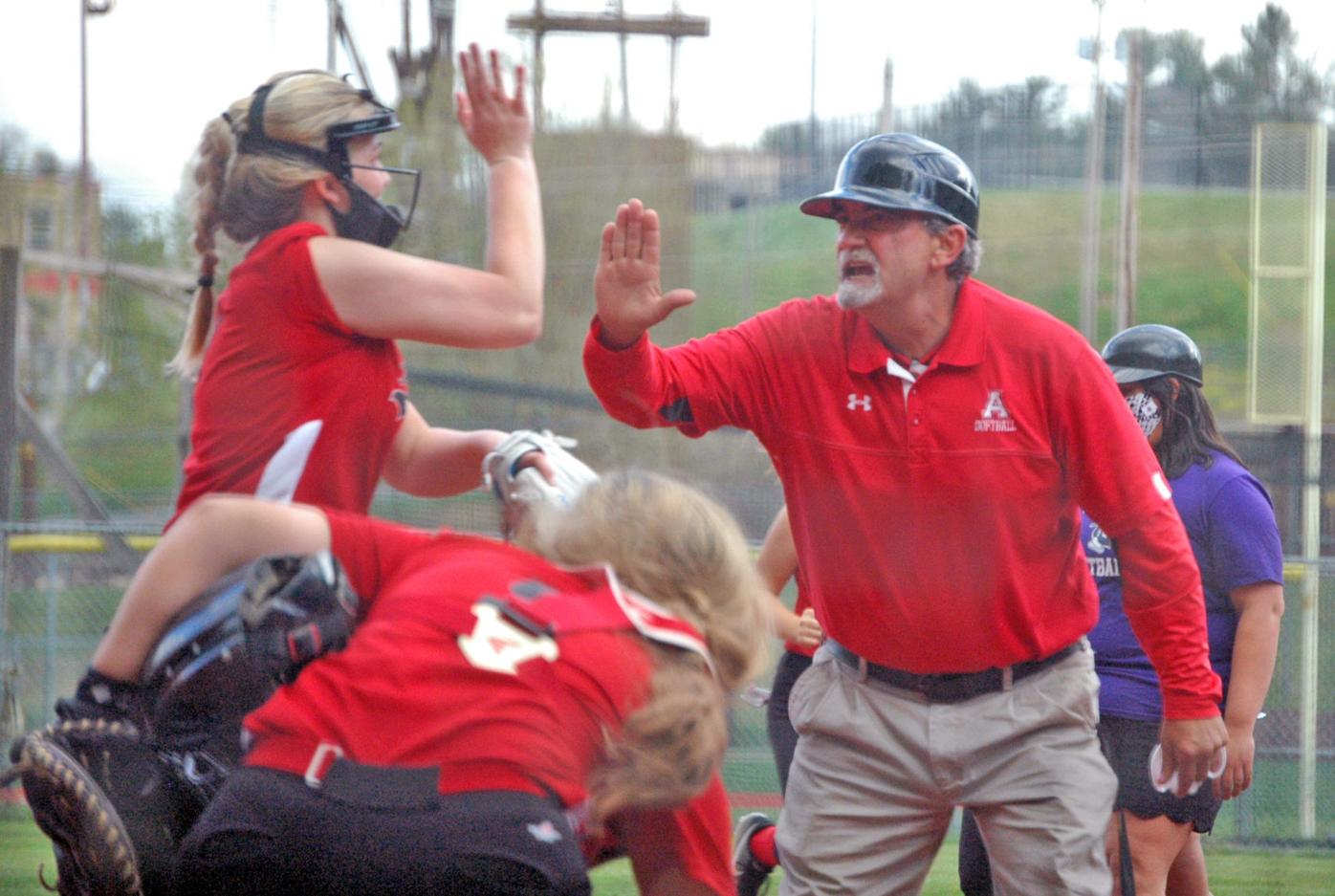 Kelli Burleson delivers a pitch to the plate with Mitchell runner Allie Johnson on second base during last week’s home finale at Viking Field.

Avery senior softball shortstop Alexis Stines throws to first for an out during the Lady Vikings’ home finale against Mitchell.

Molly Shell connects for an RBI hit in Avery's 8-6 loss to Mitchell at Viking Field on April 28.

Avery Lady Vikings softball wrapped up its regular season last week with a doubleheader against the Owen Warlassies in Swannanoa on April 26, and returned home to Viking Field to host the Mitchell Lady Mountaineers for Senior Day on April 28.

SWANNANOA — Avery met a buzzsaw in game one of its five-inning twin bill at Owen, as the Warlassies opened up its lead in the third inning before an 8-run fifth inning sealed the win.

Owen drew first blood in the top of the first inning as catcher Hannah Fortson singled and came around to score the opening run. Avery threatened in the bottom half of the frame as Cora Lee Hollifield reached on an error, Molly Shell reached on a fielder’s choice and Alexis Stines singled, but the Big Red couldn’t push a run across the plate.

The score remained unchanged until the top of the third inning, as OHS produced five runs by putting the ball in play and taking advantage of a couple of Avery errors in the frame to build a 6-0 lead. Owen batted around in the top of the fifth inning with eight runs on 10 hits, highlighted by a Fortson three-run home run.

Avery had difficulty stringing hits together off Owen starter Addison Bartlett, who struck out six in a complete-game effort, allowing no hits over the final two innings of work.

Hollifield and Shell each tallied two hits in the game.

The second half of the doubleheader was a closer affair, although Owen was able to pull off the sweep.

In the top of the first inning, Avery threatened to score as a pair of batters were hit by pitches, but could not plate a run as the game remained scoreless. Owen capitalized on a lead-off walk in the bottom of the inning, as Abby Hamilton came around the bases scoring the first of her four runs in the contest.

The Lady Vikings were unable to score in the top of the second inning, while Owen managed to extend its lead in the bottom of the inning with a five-run outburst. Tinley Clark led off with a walk, and teammate Chloe Little was hit by a pitch to put a pair of runners on base. Emily Stone plated a run with an RBI sacrifice fly, followed by an RBI from Madison Austin. Four batters later, Bailey Worley reached on an error and three runs were able to score to build the 6-0 lead.

Avery cut into the Owen lead in the top of the third inning, batting around in the inning and scoring four runs. Cora Lee Hollifield and Sierra Smith each walked to lead off the frame, while two hitters later Carolina Rose was hit by a pitch. Ellie Barnett reached on a fielder’s choice and Tynley Sheppard walked with the bases loaded for an RBI. Destiny Filyaw plated a pair of runs with a single as AHS cut its deficit to two runs at 6-4.

Owen answered in the bottom of the third inning in the five-inning affair with a six-run rally on only two hits, taking advantage of a number of walks and pair of hit batters in the frame.

The Lady Vikings placed two runners on base in the top of the fourth inning but was unable to score, and Owen mounted a three-run rally in the bottom of the inning, key by a 3-RBI double from Worley, to lead 15-4.

Showing resolve and refusing to give up, AHS scored a pair of runs in its final at-bat in the top of the fifth inning. Sheppard led the inning off with a single and later scored. Pinch-hitter Laci Powell laced an RBI single and also later scored to account for the final 15-6 margin.

Viking head coach Mike Shook gave the ball inside the circle to Avery senior Alexis Stines to make her pitching debut in her final game, facing a pair of batters to open the contest before teammate Kelli Burleson took over in relief. Mitchell managed to put a pair of runners on, but stranded them to go scoreless for the frame.

Avery managed just one hit over the first two innings off Mitchell starter Paige Branch, who struck out four Lady Vikings in the span. Burleson, meanwhile, held down the Lady Mountaineers, retiring Mitchell in order in the second inning.

In the top of the third inning, Mitchell scored the first run of the contest. Carissa Blevins reached on a walk and scored on an RBI double by Jada Street, giving the visitors a one-run lead.

The Lady Mountaineers continued to hold Avery in check, retiring the Lady Vikings 1-2-3 in the bottom of the third inning. In the top of the fourth, the Mitchell offense broke out to score four runs to take a 5-0 advantage. Allie Johnson and Austin Greene led off with singles, and following a walk to Erika Gouge, right fielder Charley Ambrose laced a 3-RBI triple. Ambrose herself scored on a Carley Bryant RBI groundout one batter later to account for the offense.

In the bottom of the fourth inning Haylee Herbert reached for Avery on a two-out double, but she was stranded on base to quell the threat.

Following a scoreless fifth inning, Mitchell continued to add to its lead, sending eight batters to the plate. Ambrose, Annali Silver and Johnson all rapped base hits in the inning, and the club took advantage of a pair of walks to take an 8-0 lead before Avery silenced the threat.

Needing to mount a comeback late in the game, Avery’s bats came to life in the bottom of the sixth inning to plate six runs. The Lady Vikings used the bunt to its advantage to reach multiple runners and put pressure on the Mitchell defense. Burleson led off the inning with the first of two doubles she connected for in the frame, with singles from Hollifield and Shell. Stines ripped an RBI triple, teammate Lanie Duncan hit into an RBI fielder’s choice, pinch-hitter Shelby Grindstaff rapped an RBI double in the inning and Sheradon Rose belted an RBI single to draw Avery to within 8-6 entering the final inning.

Avery’s defense flashed the leather gloves in the top of the seventh inning, turning a 4-6-3 double play to retire Mitchell in order. The Big Red could not muster a final game-winning rally, however, as the Lady Mountaineers retired the Lady Vikings in order to end the contest.

“This has been a great group of seniors,” Avery head coach Mike Shook said after the game. “I think five of the seven have played some varsity softball all four years. Alexis is going to Lees-McRae and has been one of my best shortstops. Haylee Herbert is good enough to walk on and play at the college level. Molly Shell for four years has been a leader on the field at catcher and was able to basically call her own game behind the plate. When she’s telling me numbers for pitches and I’m going to give her the same number, I just shake my head and agree. Sheradon Rose broke her nose just a week and a half ago, and came back to play third and catch for us in that last inning. It’s going to be hard to replace these seven seniors.”

Avery combined its JV and varsity team this season as 17 players comprised this season’s roster. Shook quickly deflected credit for the successes of this season to a group of assistants that were pivotal to keeping the team together in this unique season.

“Allen Herbert, Jamie N. Shell and Charlie Bob Barrier have tremendously helped me this season,” Shook emphasized. “I was sick for a time with the virus and they filled right in. When the football team was on quarantine, again they filled right in for me. I could not have done this season without them. They’ve said they plan to help out again next season. This is the best year I’ve had, even with missing four games, due in part to what those guys were able to take care of, allowing me to focus on game strategy and working subs in and out.”

Avery finished the season with a 1-9 conference record, but the club’s success belies it record, as it showed moxie and tenacity in playing competitively in all of its games, including matchups with state playoff qualifiers Madison, Polk County and Mountain Heritage.

“We went seven innings at home with Madison, which we haven’t ever done in my time at Avery. We played seven-inning games with Polk and Mountain Heritage,” Shook added. “I wish we had another 10 games to play this season, and I’d like to start our season now. I’m confident we would be a 5-5 team if we could have started the season at this point.”