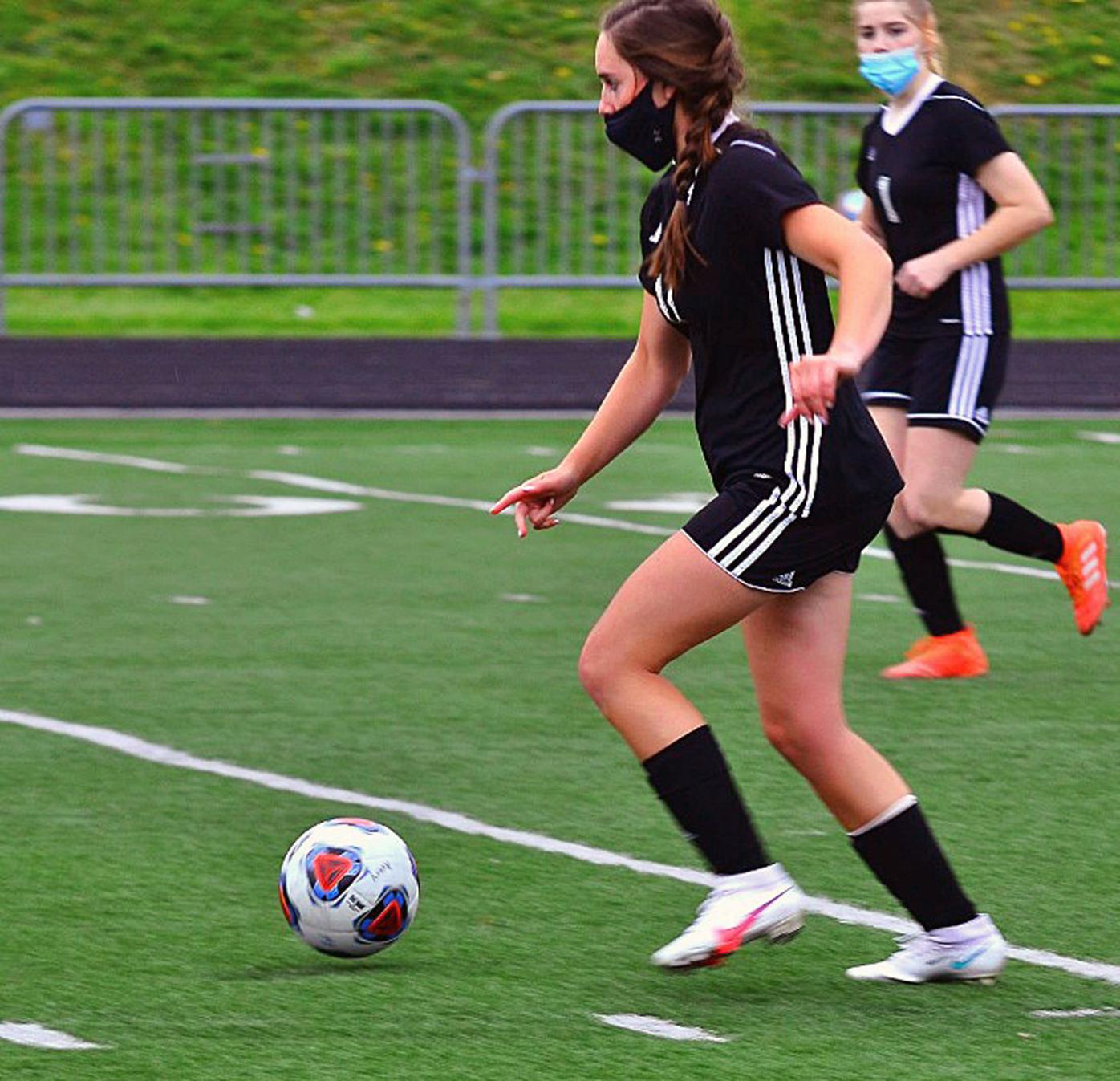 Ellie Pittman pushes the ball upfield for the attack in Avery’s 9-0 win at home last week over Mountain Heritage. 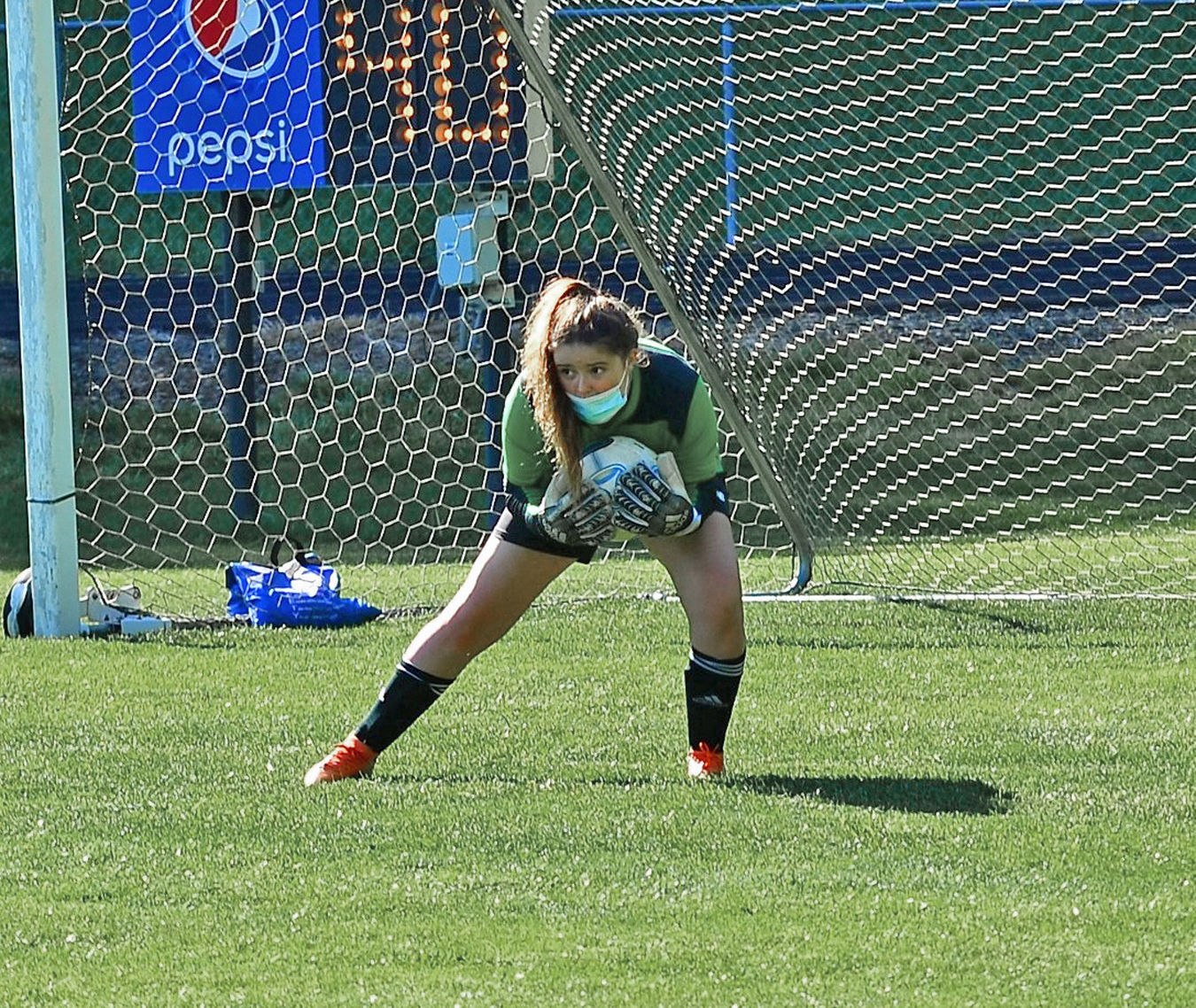 Avery keeper Abby Miller makes a save in action last week at Mitchell. 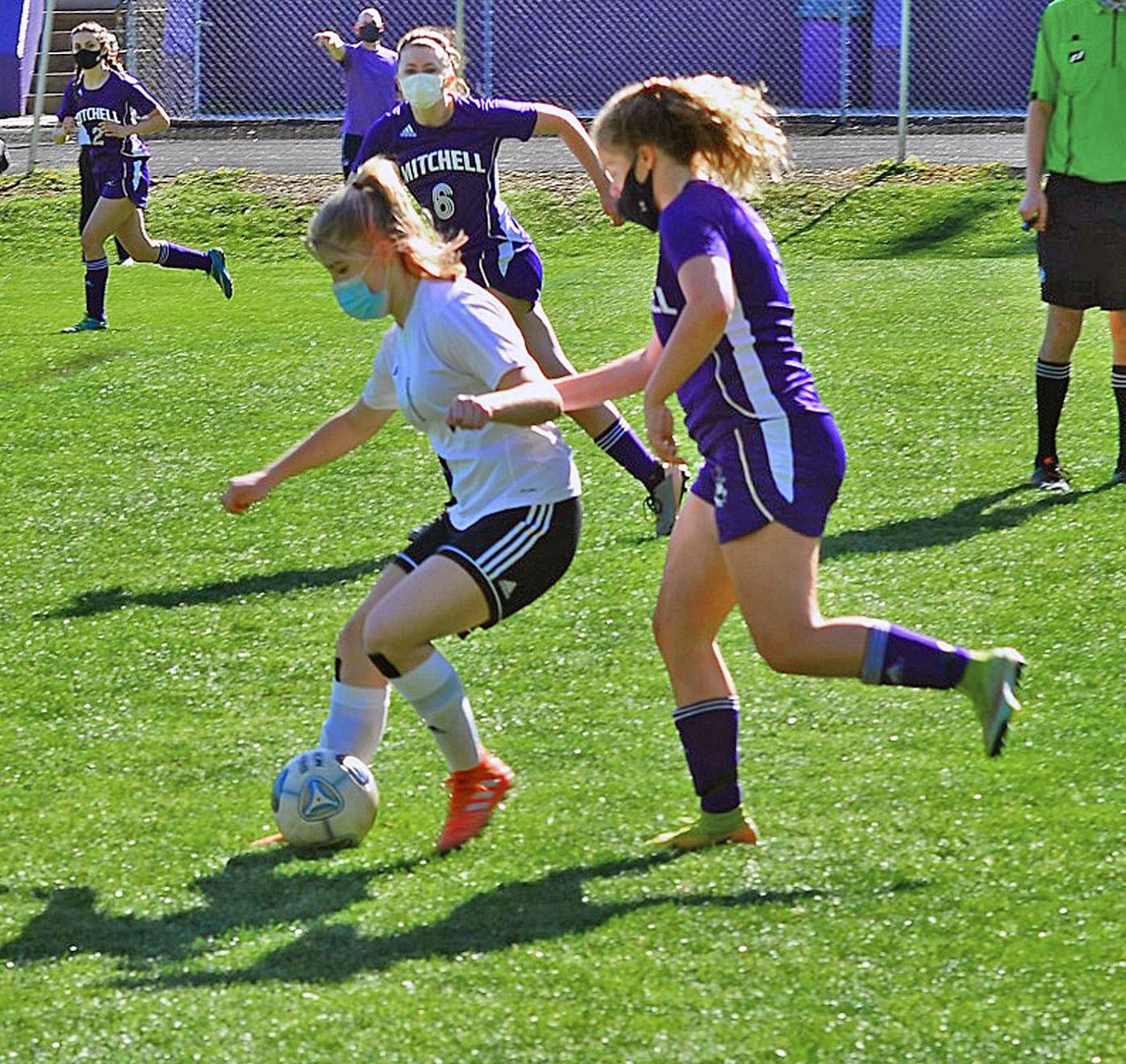 Ellie Pittman pushes the ball upfield for the attack in Avery’s 9-0 win at home last week over Mountain Heritage.

Avery keeper Abby Miller makes a save in action last week at Mitchell.

The Avery Lady Vikings soccer team returned to the pitch last week for matches at Mitchell and at home against Mountain Heritage.

LEDGER — It is never a good idea to play a game after being off for more than a week. Usually, the coaches have some leeway in the schedule and can avoid such a situation, but with the shortened, condensed season this year due to Covid, Avery had to travel to Mitchell on the first day back in school after spring break on Monday, April 12.

The Avery coaches thought it looked like things were going to be better than expected, as Avery got on the scoreboard first. Sophomore Emree Hoilman took the corner kick awarded to Avery in the seventh minute and freshman Carter Peterson was able to get a foot on the ball on the far side of the goal and put the ball in the net. However, just three minutes later Mitchell answered with a goal of their own, the first of three by Olivia Kadans. She got her first two goals off free kicks awarded to Mitchell for questionable foul calls. Both shots were long, arching shots from a sideline.

The teams had battled evenly for 25 minutes between the two fouls. The second Kadans goal came in the 34th minute. In the 37th minute, Mitchell’s Jill Pittman capitalized on a one-on-one with Avery’s freshman keeper, Abby Miller. Miller came out of the box to hinder Pittman’s run, but she was able to lift the ball over Miller’s head and find the back of the net.

The second half was better for Avery, but Mitchell was still able to find the net when Kadans got a hat trick with her third goal. It was another tough, high shot, which Miller was barely able to get her fingers on, before the ball found the back of the net. The next 15 minutes saw both teams battle for the ball and the advantage but it wasn’t until the 63rd minute when Chloe Carter ran the ball in and shot for Mitchell’s fifth and final goal. Avery didn’t give up, earning a second goal for the effort. Hoilman, who had the assist on the first goal, shot on goal and kept getting the ball back off the rebounds until finally scoring. No one was able to score again in the final 15 minutes to close out the match.

Avery had 18 shots on frame and an additional five shots which were either high or wide, with 16 saves for the Mitchell keeper. Mitchell only had eight tough shots on goal and another nine off frame, with three saves for Avery’s Miller. Avery earned nine corner kicks while Mitchell had three.

NEWLAND — Avery was able to get its game against Mountain Heritage changed to a home game since Mountain Heritage had not been able to make the first matchup. Showers were forecast and were prevalent during the match. Fortunately, the day had been warm and it didn’t rain hard or for the whole game.

Avery agreed to play a man down so that the Lady Cougars could have a field sub, as they had traveled with only 12 players, and 2 were keepers. Still recovering from spring break and from a different formation, the Lady Vikings started off slowly against Mountain Heritage, taking 10 minutes to get on the scoreboard.

The Lady Vikings realized the Lady Cougars keeper didn’t have a strong goal kick and Avery senior Reagan Hughes won an early goal kick and returned it to sender, scoring her second goal for the season. Four minutes later, junior Marisol Guzman sent a pass forward to striker sophomore Emree Hoilman, who was able to place the ball just inside the left goal post, far out of the keeper’s reach.

It took another 10 minutes before Avery scored again, when senior Ellie Pittman was able to work the ball in take a shot that went through the keeper’s fingers before reaching the back of the net. This was Pittman’s second goal on the season. She is also on the golf team and plans on playing golf at King College next year. The final 16 minutes of the half were scoreless, although Avery maintained possession of the ball most of that time.

Heritage only got one shot on goal in the half, and Avery’s Abby Miller made the save.

Although the Lady Vikings were in the lead and kept possession of the ball most of the half, the coaches knew the team was not playing up to potential. The coaches pointed out several areas for the team to work on, including playing as a team and taking smarter shots.

The team took the halftime talk to heart and picked up its intensity in the second half. In just over half the time, they scored twice the number of goals as scored in the first half. Freshman midfielder Campbell Moody picked up her first and second goals of the season in the 44th and 47th minutes of the game, respectively. The first score came off a determined effort to get the ball in the net, as she shot and reshot the loose ball several times before scoring. Her second goal came at the Penalty Kick line. The Lady Cougars were called for a foul in the box to set up the PK.

In the 51st minute, Hughes got her second goal of the game, when Hoilman sent her a through ball. Three minutes later junior Rubi Garcia sent Hoilman a pass for her second goal of the game, her fifth goal of the season. Two minutes later, in the 58th minute of the match, freshman Roma Benfield set up junior Emily Flores for a score, respectively their first assist and goal of the season. In the 62nd and final minute of the match, sophomore Ava Schmidinger, off an assist by Renn Herdklotz, scored the team’s ninth goal of the match. Schmidinger is a key player for the Lady Vikings, with the ability to play all the positions well. She is frequently anchoring the back line, but her speed and tenacity are also very helpful in the midfield; her ability to shoot is a threat from wherever she is playing. She can take goal kicks and put the ball on frame on free kicks.

The NCHSAA set in place “mercy” rules for most sports. For soccer, when a nine-goal differential is reached at halftime or at any time in the second half, the game is over, which forced the match’s end just more than midway through the second half.

Avery had 14 shots on frame in the first half, with another 11 shots high or wide, scoring on three. In the second half, in just half the time, Avery had another 10 shots on frame and five additional shots off-frame, scoring on six of them. The Lady Vikings were much more efficient in the second half. Freshman keeper Abby Miller earned her first shutout in her young high school career.

Avery had a scheduled home match with Madison on Monday, April 19, while traveling on Wednesday, April 21, to take on Polk County. The following week is the final week of regular season for soccer. Senior Night is on Wednesday, April 28, against Mitchell, as the Lady Vikings will honor its five seniors: Penelope Brocco, Reagan Hughes, Bridgette Jarrell, Lily Perez and Ellie Pittman.