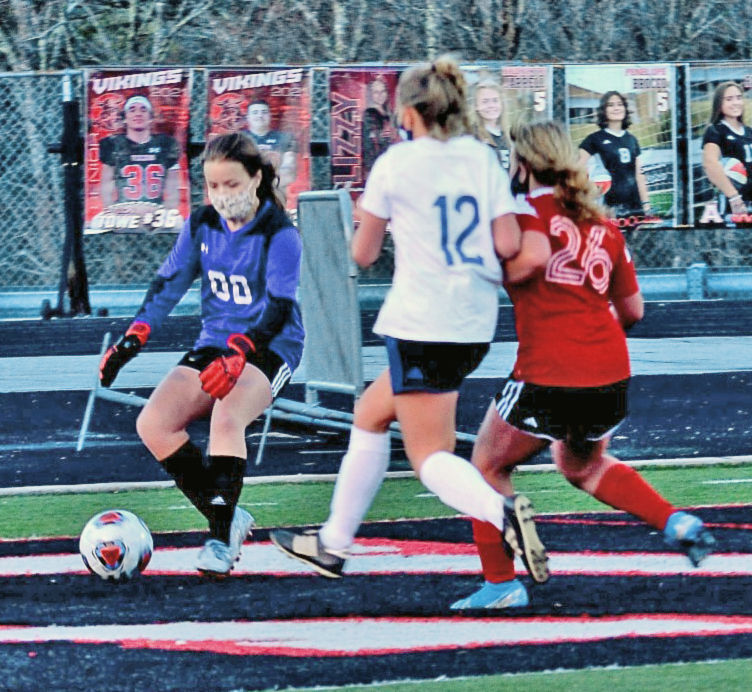 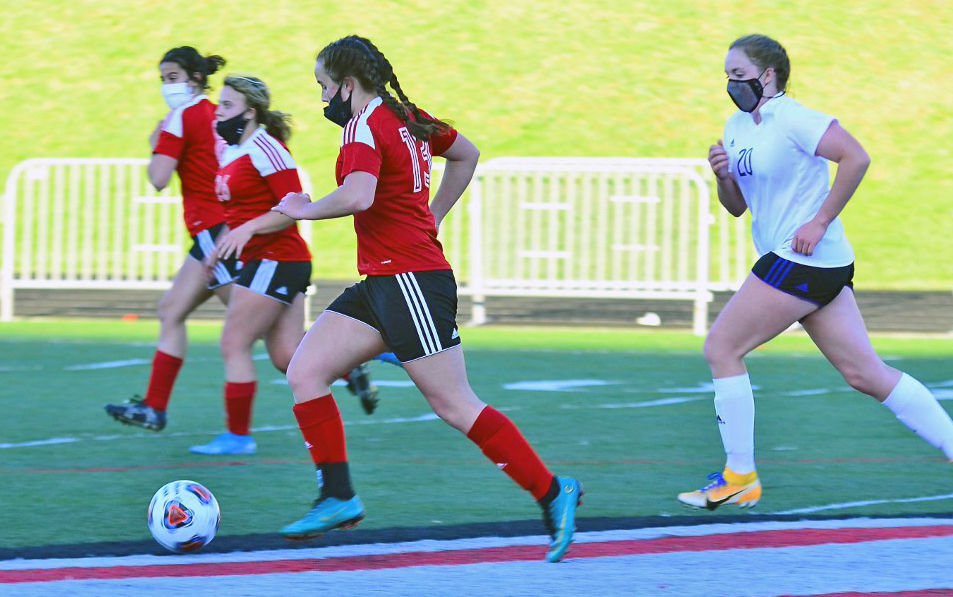 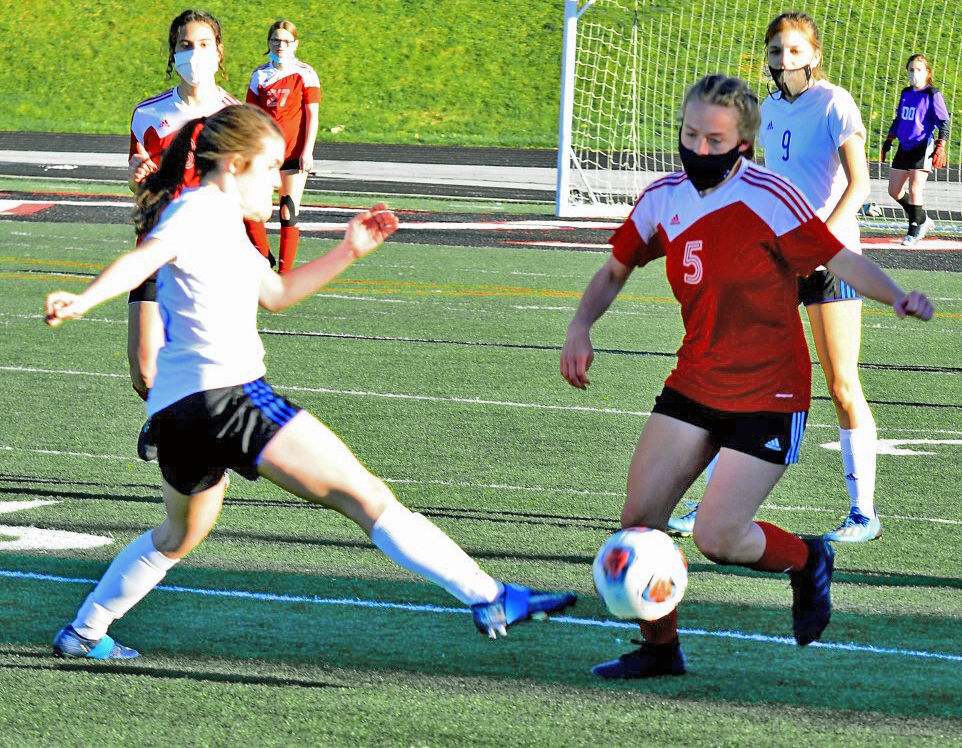 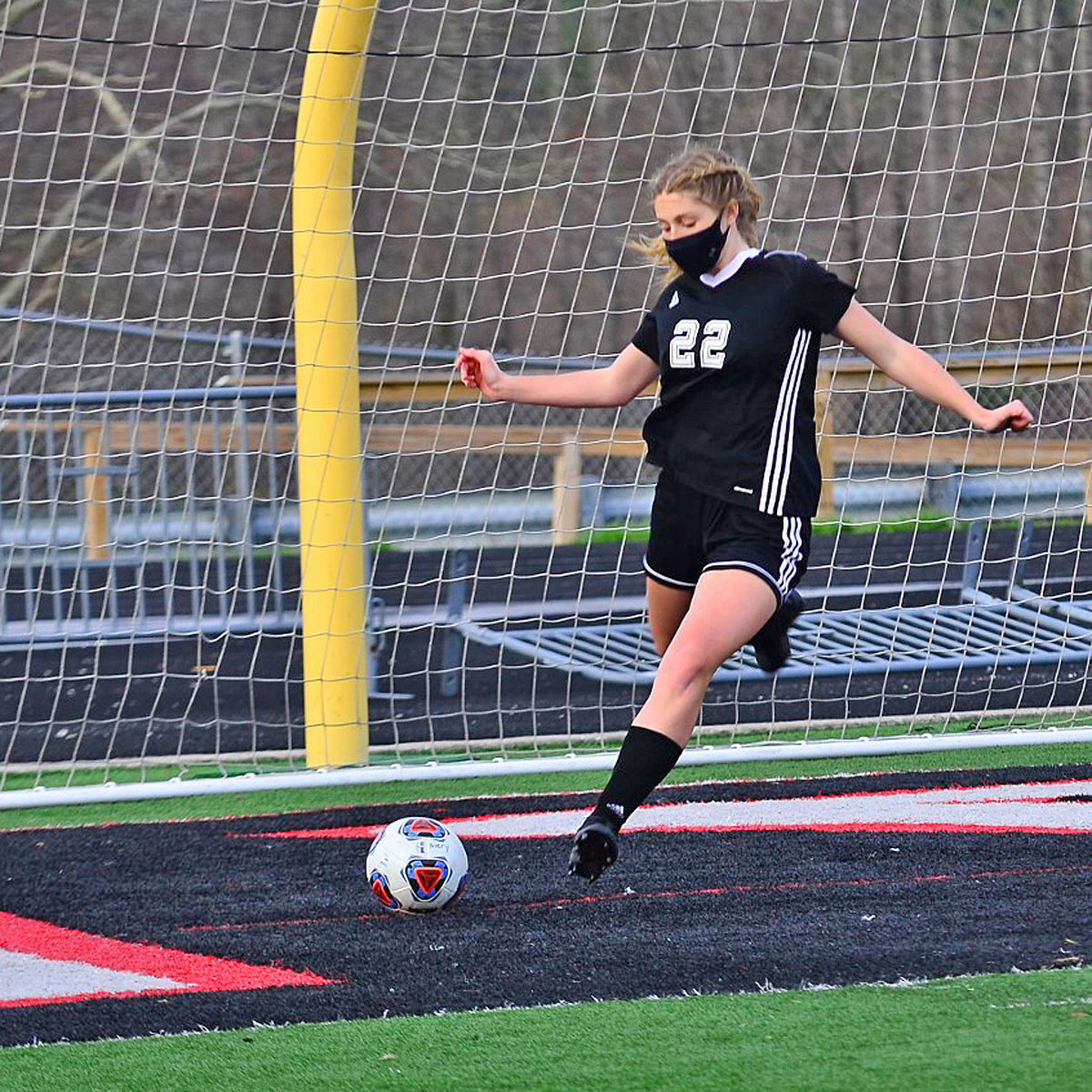 Reagan Hughes sends a goal kick up the field in Lady Vikings soccer action last week at home against Owen.

Reagan Hughes sends a goal kick up the field in Lady Vikings soccer action last week at home against Owen.

NEWLAND — The Lady Vikings were excited to have their first home game of the 2021 season, but were not as thrilled to be playing perennial powerhouse Polk so early in the season. Two scheduled games did not happen, so this was the young Lady Vikings third game of the season.

Another setback was that starting keeper, freshman Abby Miller, was unable to play. Fortunately, the backup keeper of the past couple years, junior Baker Bumgarner, stepped up for the team. Starting on the back line was the trio of senior Lily Perez, sophomore Ava Schmidinger and freshman Tate Puckett. The midfielders starting the game were seniors Reagan Hughes, Penelope Brocco and Bridgette Jarrell, junior Marisol Guzman and freshman Campbell Moody. Starting at striker were senior Ellie Pittman and sophomore Emree Hoilman. Because of injuries and Covid protocols, the coaches have tried to keep the team members willing and able to play multiple positions, so that when the need arises, there are several players who can play a given position.

Seven minutes into the game, Scout Harmon took a run down the right side with the ball and sent a beautiful shot to the far post, scoring for Polk. Try as they might, neither team was able to change the score for the remaining 33 minutes of the half. Avery coaches felt the Lady Vikings had played an awesome half, especially defensively. Polk possessed the ball more than Avery, taking 14 shots, with only six on target. Avery only took one shot, which was not on target.

Avery took another shot early in the second half and scored, knotting the score at 1 each. Proving the coaches’ point that offense begins on the back line, freshman Carter Peterson, in on the back line, sent the ball to midfielder Moody, who sent the ball forward to striker Pittman who scored for Avery. The Lady Wolverines doubled down and found their way back on the scoreboard three minutes later with a goal by Caelen Gaul.

Not long after that, Harmon scored a second time, with a goal similar to her first, shooting from the right side high to the back of the net on the far side. Gaul also scored a second goal, this time off of a corner kick in the 66th minute of the game. Unfortunately, the Lady Wolverines weren’t done. Caroline Taylor netted quick goals at the end of the game, dribbling the first in at the 75th minute, and another in the 77th minute.

The final score was tough to take, but the Avery coaching staff felt like it had been a good game for the Lady Vikings, especially the first half. The youth of Avery’s squad and conditioning caught up with the Lady Vikings. Improving communication, working on miscues, being more aggressive to the ball and staying tough in the second half are a few things the team will continue to work on.

Meanwhile, during the course of the match, the Lady Vikings were informed that Wednesday’s home game with Owen had been moved to Tuesday because of the weather. Turnaround time was halved, plus the coaches had been concerned about playing two strong teams in one week, and now it would be back-to-back days.

Tuesday, March 30, was another nice day, and the Owen Warlassies were fresh and ready to play. The Lady Vikings had their starting keeper back in the goal, but were now missing a key defensive player, as freshman Peterson was called into the starting lineup to replace injured sophomore Schmidinger. The rest of the starting lineup remained the same as the day before.

The Warlassies struck first, in the 7th minute, with Mattie Lehman running the ball in and sending a strong shot into the net for the only score in the first half. Avery, in spite of having played a tough game the night before, was fired up and played their most aggressive half of the season. Players at all areas of the field challenged the ball and interrupted Owen’s flow and calm, as the first half ended with a 1-0 Owen lead. Avery took four shots on goal to Owen’s six shots on goal, plus one more shot attempt sent wide.

Avery started off the second half at a disadvantage, as a starter was warned about “improper equipment” and a substitute had to start the game. During that time, Avery was called for a handball, and Owen set up quickly and took the free kick before the Lady Vikings were prepared. Rachel Graham took the free kick, sending the ball into the back of the net.

In the 51st minute, Owen struck again when Abby Rietzel sent a ball past the Avery defenders and chased it down before Avery could adjust, and was able to get a shot off, out of reach of the keeper. In the closing minutes of the match, at the 77th minute, an Owen player shot a ball from the left, across the face of the goal and another Owen player tapped the ball in behind the keeper.

After a great first half with aggressive, exciting play, Avery was not able to get back into rhythm in the second half, continuing to show promise in playing with some very strong teams for a half, or more, of the game. The Lady Vikings now look to pick up where they left off after spring break, and to continue to grow in many ways, including playing strong for a complete game.

After spring break, on Monday, April 12, Avery will travel to Mitchell for a 5 p.m. match, and will be on the road again on Wednesday, April 14, for a match at 6 p.m. at Mountain Heritage. The team thanks all the parents, fans and cheerleaders for supporting the Lady Vikings.