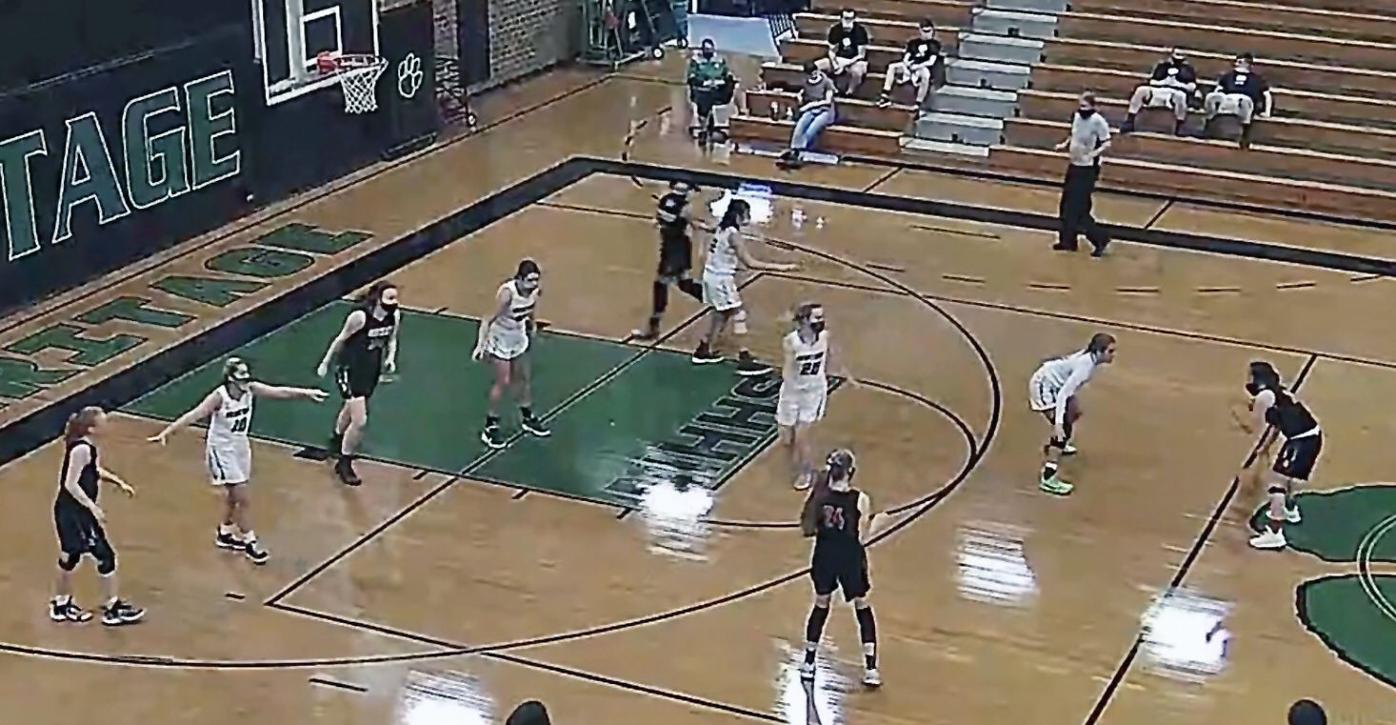 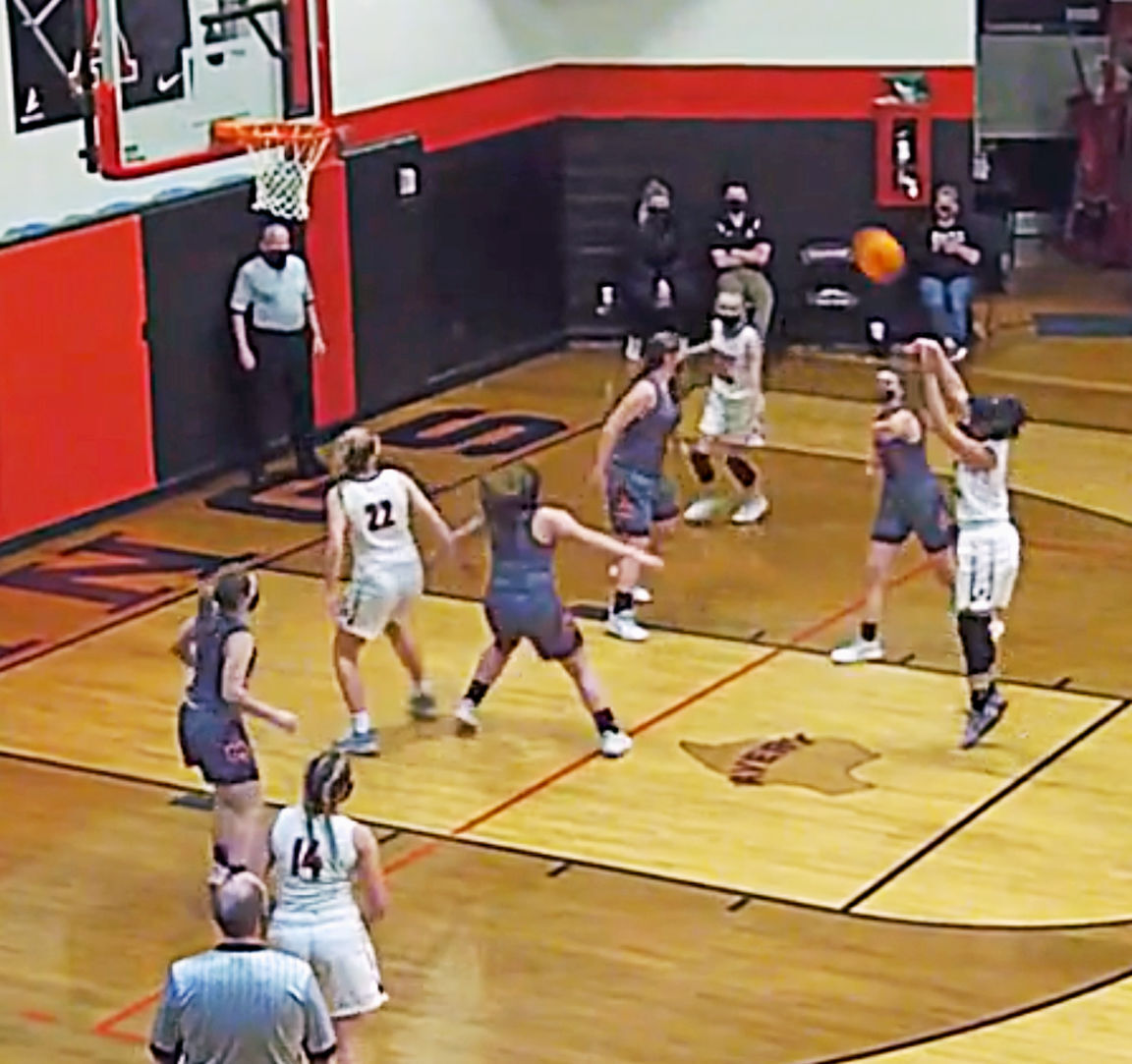 Zoin McClarin pulls up for a jumper in Avery's win over Madison on Feb. 5. The freshman scored a team-high 11 points in the Lady Vikings' matchup on Feb. 6 at Mountain Heritage.

Zoin McClarin pulls up for a jumper in Avery's win over Madison on Feb. 5. The freshman scored a team-high 11 points in the Lady Vikings' matchup on Feb. 6 at Mountain Heritage.

Thanks in part to inclement weather, the Avery Lady Vikings had a full week to process a loss in its previous contest at Mitchell and focus its efforts on the visiting Madison Lady Patriots on Friday, Feb. 5, which paid dividends in a 63-42 win against Madison. Less than 24 hours later, the Lady Vikings hopped a bus to Burnsville to face Mountain Heritage, with the Lady Cougars using a second half flurry to pull away for a 74-36 win.

NEWLAND — Avery’s defense prevented Madison from building any offensive momentum at the beginning of both halves, as the offense outscored the Lady Patriots by a combined 39-7 margin over the course of the first and third periods en route to its largest margin of the victory this season.

Avery forced numerous Madison turnovers in the first quarter and was efficient from the floor to build an early commanding lead. Avery scored the first 17 points of the game, holding MHS scoreless until a free throw from Shelby Reece with approximately two minutes remaining in the opening stanza.

Cora Hollifield came out with a hot hand, scoring four buckets in the quarter, with a pair of baskets each from Zoie McClarin and Alexis Stines. Emree Hoilman sank a three-pointer and Reagan Hughes added a basket to propel the Lady Vikings to a 21-3 lead after eight minutes of play.

Madison began to find a scoring groove in an attempt to carve into the Lady Viking lead, as Reece scored four additional points, with five points from Leah Sawyer and four from Shelby Byas. Avery maintained pace, however, as Addie Beck asserted her presence inside the paint with seven points in the period. McClarin and Hoilman each added a bucket as the Lady Vikings held a 33-17 lead at halftime.

As the their quarter got under way, it seemed the Big Red had collected a second wind and stormed through the Lady Patriot defense. Stines poured in five points in the frame, with a second 3-point basket by Hoilman and four from Beck in the stanza. Avery in total outscored Madison 18-4 in the third period to erase any doubt of the game’s outcome once the Lady Vikings led 51-21 after three quarters.

The Lady Patriots carved into the final margin of victory as reserves were able to play for the majority of the final eight minutes, as AHS came away with the 21-point triumph.

Three Avery players scored double figures, led by Stines with 12, Beck with 11 and Hollifield with 10. Hoilman added eight, with seven points from Khloe Burleson and six points from McClarin. Hughes chipped in with four points, with three from Carter Peterson and two from Tynley Shepherd.

BURNSVILLE — Avery looked to outrace another bout of winter weather on Saturday, Feb. 6, as the Big Red visited the Mountain Heritage Lady Cougars. Avery hung tough with the defending conference champions, but a late second quarter and early third quarter surge allowed the Lady Cougars to build upon a double-digit lead to pick up a decisive win.

Mountain Heritage seized the early lead as six players found their way into the scoring column over the first eight minutes, paced by a pair of baskets from Western Carolina University commit and senior guard Hannah Tipton. Teammate Kennedy Wilson knocked down the first of what would be six 3-point baskets for the game during the opening quarter. Avery countered with baskets from McClarin and Beck, as well as a pair of foul shots from Stines and a free throw from Hughes to keep the Lady Vikings close at 13-7 after one quarter of play.

The Lady Cougars gradually extended its lead in the second quarter as its defense forced the Lady Vikings into turnovers that had not occurred with as much frequency during the Big Red’s previous-night win over Madison. AHS turned the ball over on four consecutive possessions midway through the stanza and MHHS capitalized with nine straight points to build a 26-14 edge. Heritage used a 7-2 scoring spurt following the mandatory officials’ timeout due to face masks for players at the midpoint of the period, building a lead as large as 17 at 33-16. Avery cut into the lead to close the half with its own 5-0 scoring run, capped by a conventional three-point play by Hughes in the waning seconds of the quarter to draw the Lady Vikings within 33-21 at halftime.

In the second half, however, AHS could find no answer for the press defense of Heritage and its high shooting percentage. Kennedy Wilson was white hot from the floor, scoring 12 points in the third quarter and 20 points total in the second half. Teammate Kaydence Kooles converted a pair of three-pointers in the quarter and eight points for the half. Meanwhile, Avery managed only six third-quarter points on a pair of McClarin baskets and a Stines field goal, leaving Avery in a 52-27 deficit entering the final eight minutes.

Seven Lady Cougars scored at least two points each in the fourth quarter while holding AHS to only four baskets in the frame. Hollifield scored a pair of baskets for Avery over the final stanza, with baskets from Peterson and Beck, along with a Hughes free throw to close the Lady Vikings scoring.

McClarin was Avery’s only player scoring double figures with 11 points, with six from Stines and five points from Hughes, while Hollifield and Beck scored four points each. Four Lady Cougars scored double figures, including Tipton (14), Kooles (11) and Keira Wilson (10).

Avery is scheduled to travel to play Polk and to Owen for Western Highlands Conference games this week.