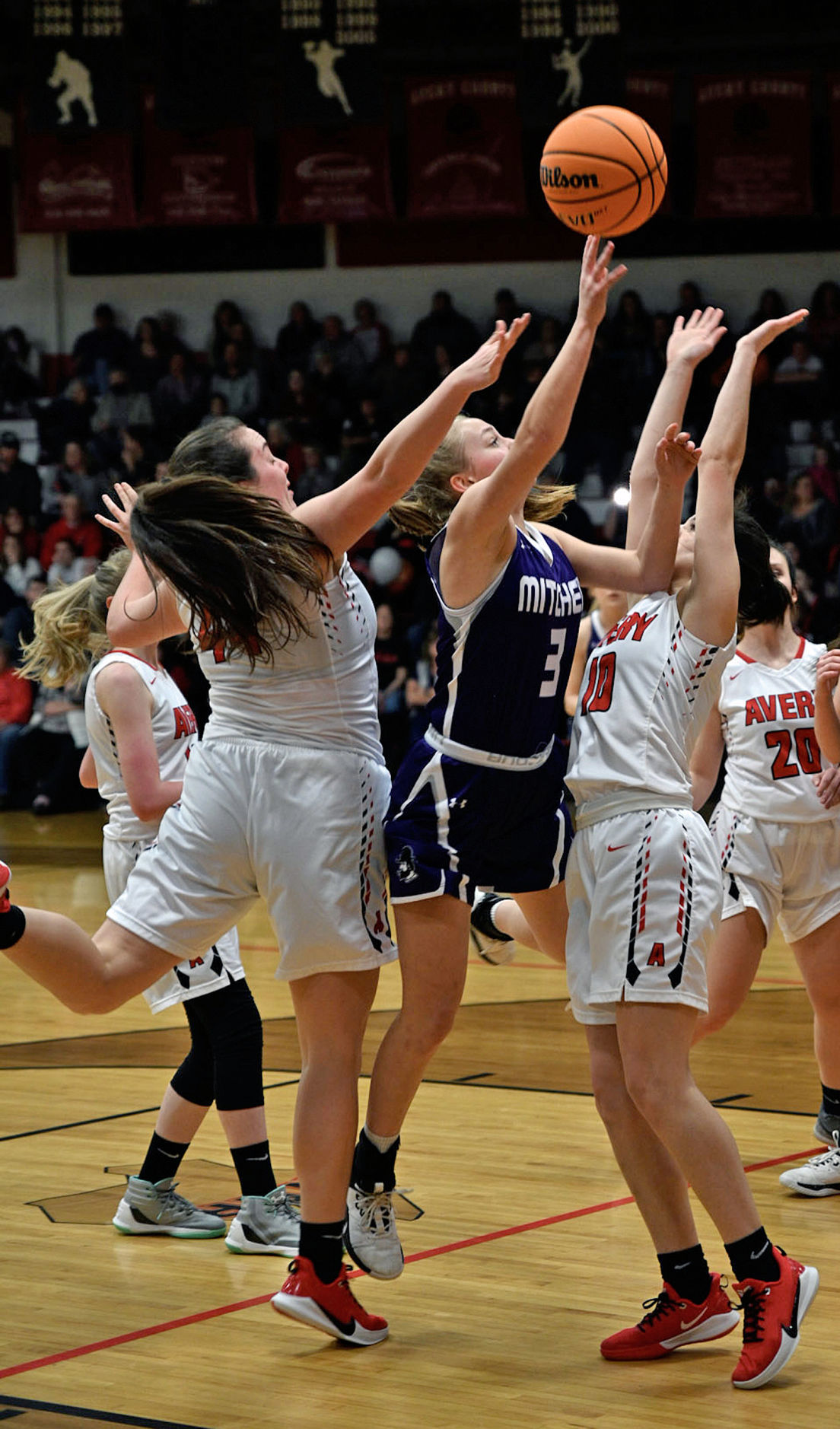 Avery seniors Lila Cantrell and Tiffany Brocco defend a shot by Mitchell's Jill Pittman in the team's home finale on February 10. The Lady Vikings fell to Mt. Heritage in the WHC Tournament semifinals but qualified for this week's 1A state girls basketball tournament. 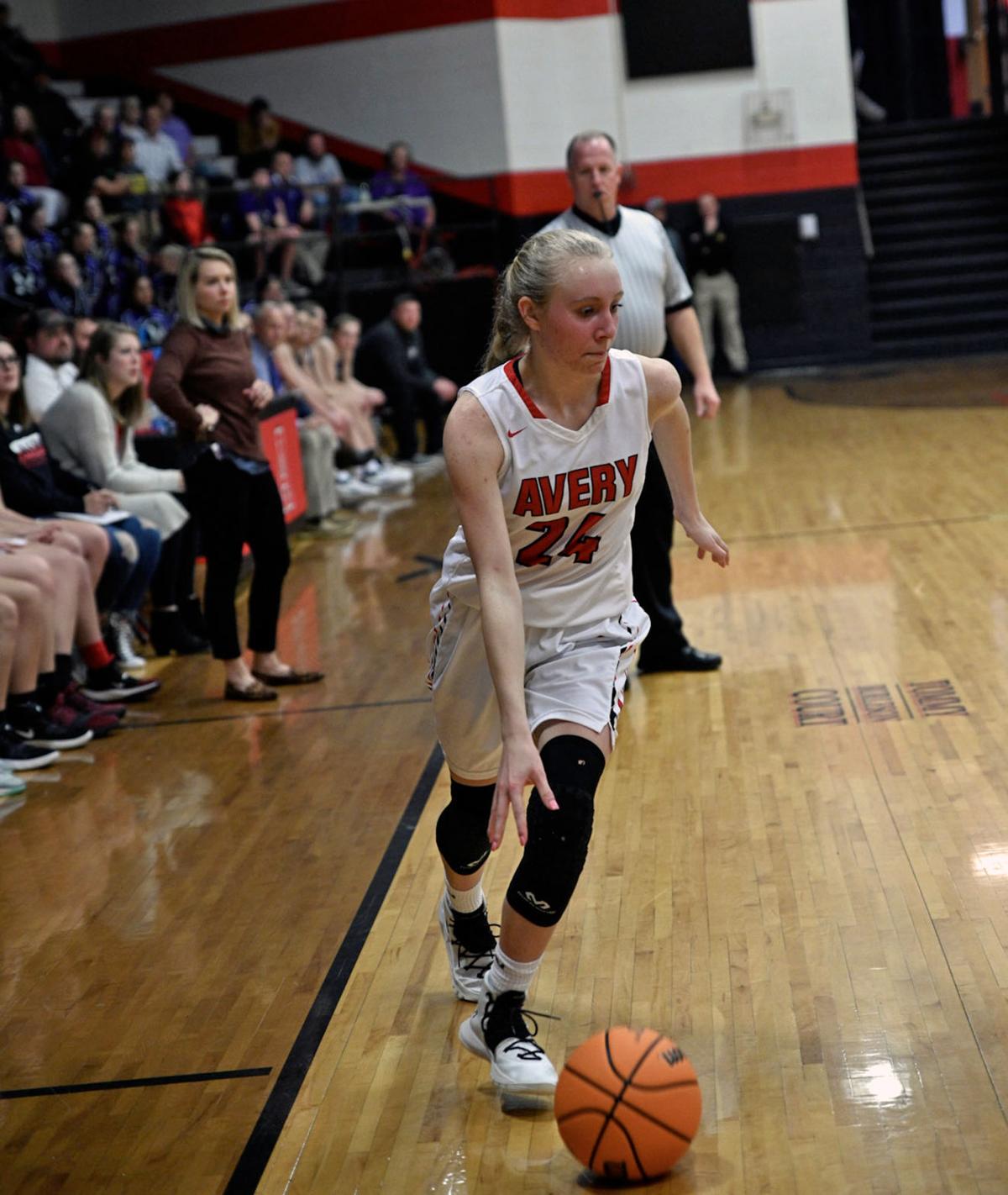 Avery seniors Lila Cantrell and Tiffany Brocco defend a shot by Mitchell's Jill Pittman in the team's home finale on February 10. The Lady Vikings fell to Mt. Heritage in the WHC Tournament semifinals but qualified for this week's 1A state girls basketball tournament.

BURNSVILLE — Looking to make an improbable run through the conference postseason tournament, the Avery Lady Vikings faced a tall task in trying to upset the defending 2A state champions Mountain Heritage on its home floor on Tuesday, Feb. 18, in the Western Highlands Conference Tournament semifinals.

Avery advanced to the final four of the tourney after a thrilling overtime win in Swannanoa on Feb. 14 against the Owen Warlassies. Unfortunately for the Big Red, Heritage proved to have too many players firing on all cylinders, as a balanced Lady Cougars attack, in addition to 27 Lady Vikings turnovers, combined to doom any aspirations for an upset bid in a 70-34 Avery loss.

Avery scored the first points of the game on an Addie Beck shot from inside, but it would prove to be the only Lady Vikings lead of the contest, as Heritage proceeded to go on an 13-2 scoring spurt over three-and-a-half minute stretch to open up a seven-point lead, which swelled to double figures late in the stanza.

The Lady Cougars received balanced scoring through the first eight minutes, including three baskets from Hannah Tipton, five points from Hannah Ray and a pair of three-pointers by forward Kylie Robinson, as Heritage led 23-9 after one quarter of action.

Avery struggled to maintain possession of the basketball against a stifling Cougars defensive front. The Big Red turned the basketball over 16 times in the first half, which contributed to MHHS opening up its transition offense for multiple easy scoring opportunities. The Lady Vikings managed just two baskets in the second quarter, and Mountain Heritage inflated its advantage to 44-15 by the end of the first half.

“Heritage was just more physical than us and they did a great job capitalizing on our mistakes,” Avery head coach Allison Phillips said after the game. “We continue to struggle to get into our offense consistently and that has hurt us all season.”

Entering the third quarter, both teams were having difficulty putting the basketball into the hoop before a pair of three-pointers off the bench from the Lady Cougars’ Ivy McGee seemed to kickstart the home team’s offense. A three-pointer by Alexis Stines was coupled with baskets by Addie Beck and Tiffany Brocco serving as the Lady Viking scoring for the stanza.

Heritage opened up a 40-point lead on a Tipton free throw with 2:10 to play in the third period, initiating a running game clock for the remainder of the contest as per the NCHSAA basketball mercy rule.

For the remainder of the game, the Lady Vikings outscored MHHS 12-8. Emree Hoilman scored all three of her points in final frame, with three points from Beck and a three-pointer at the buzzer from Lila Cantrell to provide for the final margin of the game.

Beck led the Avery scoring charge with 10 points, with eight points from Stines and five points from Brocco. Four Lady Cougars scored in double figures, paced by 15 points apiece from Tipton and Ray, 13 points from Robinson and 10 points from McGee.

“Robinson shot the ball well from the outside against us, and we didn’t do a great job defending the players around Tipton,” Phillips added. “Addie scored 10 for us in the game, and I felt like we should have been getting her the ball more. Unfortunately, we tended to turn it over before we could get it into our post.”

Lady Vikings qualify for 1A playoffs

The official release of NCHSAA girls basketball playoff brackets occurred on Sunday afternoon, Feb. 23, and the Lady Vikings earned the No. 28 seed in the 1A West region. Avery traveled on Tuesday, Feb. 25, to Misenheimer to take on No. 5-seeded Gray Stone Day School.

“We have been waiting since last week to figure out where we were going. I’m glad we get the opportunity to go to Gray Stone Day and give our younger girls some experience in the playoffs,” Phillips said of the postseason berth. “It’s such a fun time of year and we know that we can compete with anyone after playing one of the toughest non-conference and conference schedules.”

Gray Stone won the Yadkin Valley Conference regular season and tournament championships and boasts a 23-1 overall record this season. The two teams last met in the 2017 playoffs, where the Lady Vikings beat Gray Stone in Misenheimer 55-39.

“I look forward to spending the afternoon with the girls and letting them experience the thrill of playoff time,” Phillips noted. “We’ll work hard on cleaning up some fundamental mistakes and hopefully that will translate into us playing well.”

Results of this matchup were not available at press time, and a report of Avery’s playoff performance can be found in next week’s edition of The AJT.