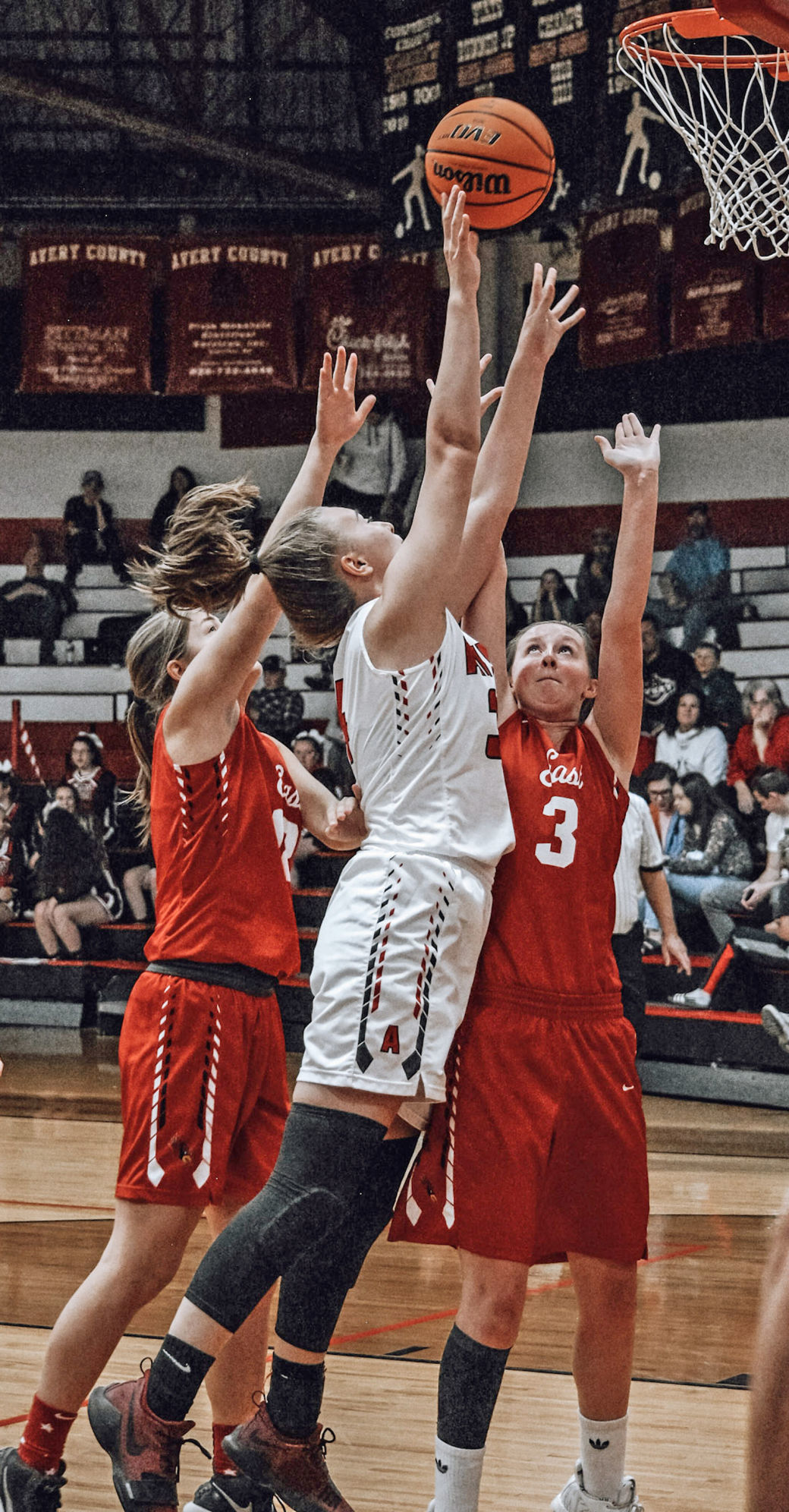 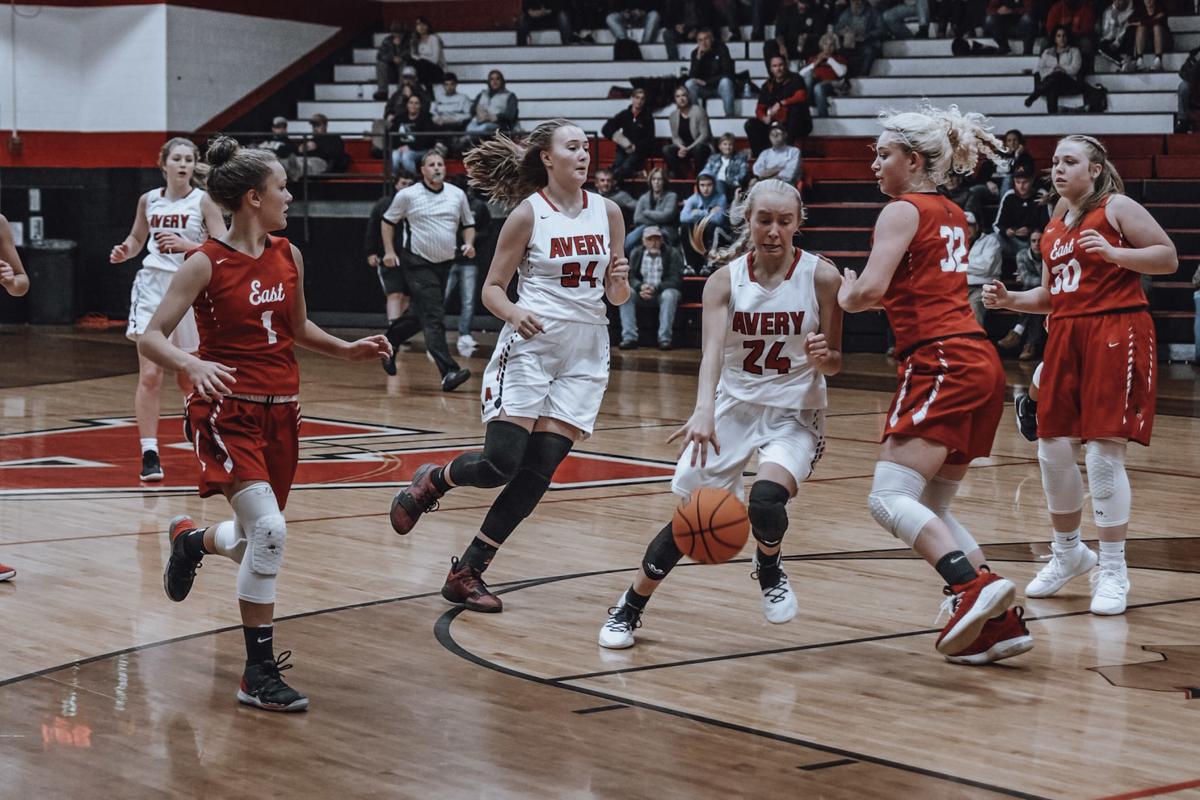 The holiday season is generally an opportunity for family and friends to relax from the hustle and bustle of the day-to-day grind, as well as to pause and reflect.

For the young Avery Lady Vikings basketball team, however, the week comprising the close of 2019 and opening of 2020 meant three challenging road games over a five-day stretch, taking the Big Red to Transylvania, Polk and Alleghany counties, respectively, for hardwood action.

ROSMAN — Avery looked to get on the winning track with a trip to Rosman High School to face off with the Lady Tigers on Monday, Dec. 30. RHS, who had fallen short in four of its previous five contests, served as a comparable 1A foe with which the Big Red could right its ship.

Rosman scored the game’s first five points before Avery rallied to cut the Lady Tigers lead to 13-10 after one quarter of action. Ashley Dodson paced RHS with seven points, while the Lady Vikings were led by a pair of baskets from Tiffany Brocco.

The Lady Tigers managed to utilize its press defense to extend its lead by halftime to 29-23 at the intermission. Emree Hoilman scored six points in the half to match Brocco’s total, with a pair of baskets from AHS teammate Addie Beck.

In the third quarter, Rosman turned up the defensive pressure to outscore the Big Red 18-11 in the stanza to open up a 47-34 advantage with eight minutes remaining. Over the course of the final frame, Rosman outscored the Lady Vikings 18-14 to close the matchup, primarily holding Avery at bay by virtue of its visits to the free-throw line. Rosman made 21-of-45 shots from the charity stripe for the game, including eight free throws in the final period. Avery connected on 8-of-15 free throws for the contest.

Brocco led the way for AHS with 12 points, with Avery receiving additional offensive contributions from players who are regulars from the junior varsity roster, including Cora Hollifield who tallied 10 second-half points to finish as the only other Lady Viking in double figures scoring. Beck added eight points, with six points each from Reagan Hughes, Emma Wise and Hoilman.

Rosman’s Dodson led all scorers with 22 points, with 13 points from Landyn Stewart.

COLUMBUS — In its first matchup on the hardwood in 2020, the Avery Lady Vikings (1-10) ventured to Polk County (8-1) to open Western Highlands Conference play against the Lady Wolverines. Polk County, who has struggled on the court over the past several seasons to the tune of a 21-game conference losing streak, took advantage of a shorthanded Avery roster missing a pair of its usual starters.

Polk opened the game with an 11-0 run in the first quarter before a basket from Avery’s Mari Maya closed the quarter with the Lady Wolverines holding a nine-point lead. Polk went on to extend its lead to 18 points at 22-4 midway through the second stanza before Avery closed the half outscoring Polk 7-2 to cut Polk’s lead to 24-11 at halftime.

The Lady Vikings struggled offensively in the first half, netting just two field goals in the entire first half. Alexis Stines led Avery with three points for the half.

Polk County pulled away in the game in the third quarter, outpacing Avery by an 18-6 margin to extend its advantage to 42-17, then finished the game with a 17-2 point differential in the final eight minutes to cruise to the 40-point home win.

“I was disappointed with the Polk and Rosman losses because I believe those are games that we should have won,” Avery head coach Allison Phillips said after the contests. “We’ve had a few great moments but are still being plagued by turnovers.”

SPARTA — To close a long week on the road, the Lady Vikings followed its Friday evening two-hour-plus bus trip south to Columbus with a more-than-two-hour bus ride north to Sparta for a Saturday afternoon non-conference tilt against the 8-0 Alleghany Lady Spartans.

The two teams played tightly through the first eight minutes of play, as the Lady Vikings trailed by only six points at 13-7 entering the second period. Lila Cantrell scored four points in the period for Avery, with a bucket from Hollifield and a Beck free throw to account for the AHS offense.

Continuing to generate offense became a hardship for the Big Red in the second quarter, however, as Alleghany outscored the Lady Vikings 14-4 in the frame to extend its lead to 27-11 at halftime. Alleghany was paced by Abigail Keesling, who posted 12 first-half points to lead all scorers. Avery received buckets from Tiffany Brocco and a second field goal from Hollifield before the intermission.

Both teams struggled to put the ball into the basket immediately following the halftime break, with Alleghany outscoring Avery 7-6 for the stanza to lead 34-17 entering the fourth quarter.

The teams heated up in the fourth quarter, however, as Hollifield drained a pair of baskets, including a three-pointer, with field goals from Brocco and Madison Greene in the quarter. Avery was unable to cut into the Lady Spartan lead, as Alleghany sank 4-of-4 free throws in the final stanza as part of a 13-point quarter to secure the win.

Hollifield and Brocco led the Avery charge with nine points apiece, with four points by Cantrell. Keesling led all scorers with 18 points, with eight points from Maddie Brown.

“I was pleasantly surprised with how we played against an 8-0 Alleghany team,” Phillips added. “We still made mistakes, but overall the flow of the game was much better, and I hope that we can continue that trend this week.”

Following the three-game gauntlet, the Lady Vikings hope to regroup as it enters the meat of the conference schedule this week.

“Holiday break is always difficult with weird schedules and the kids not being in school,” Phillips explained. “We’ve had players out over the break, so I’ve been impressed with the JVs I’ve brought up. Our younger girls are competing and they are earning a lot of playing time. We’re still looking for that spark as we go into conference play.”