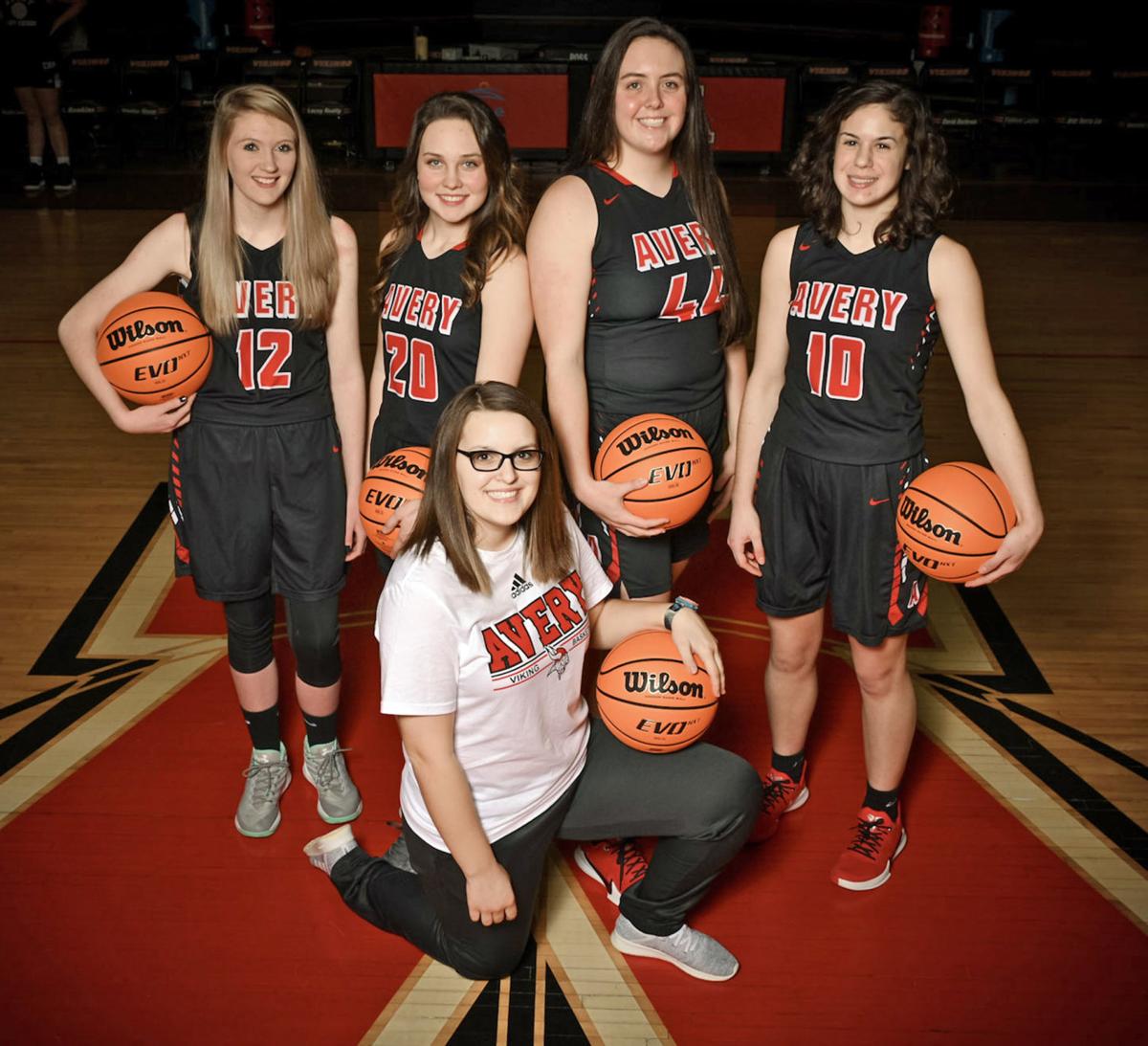 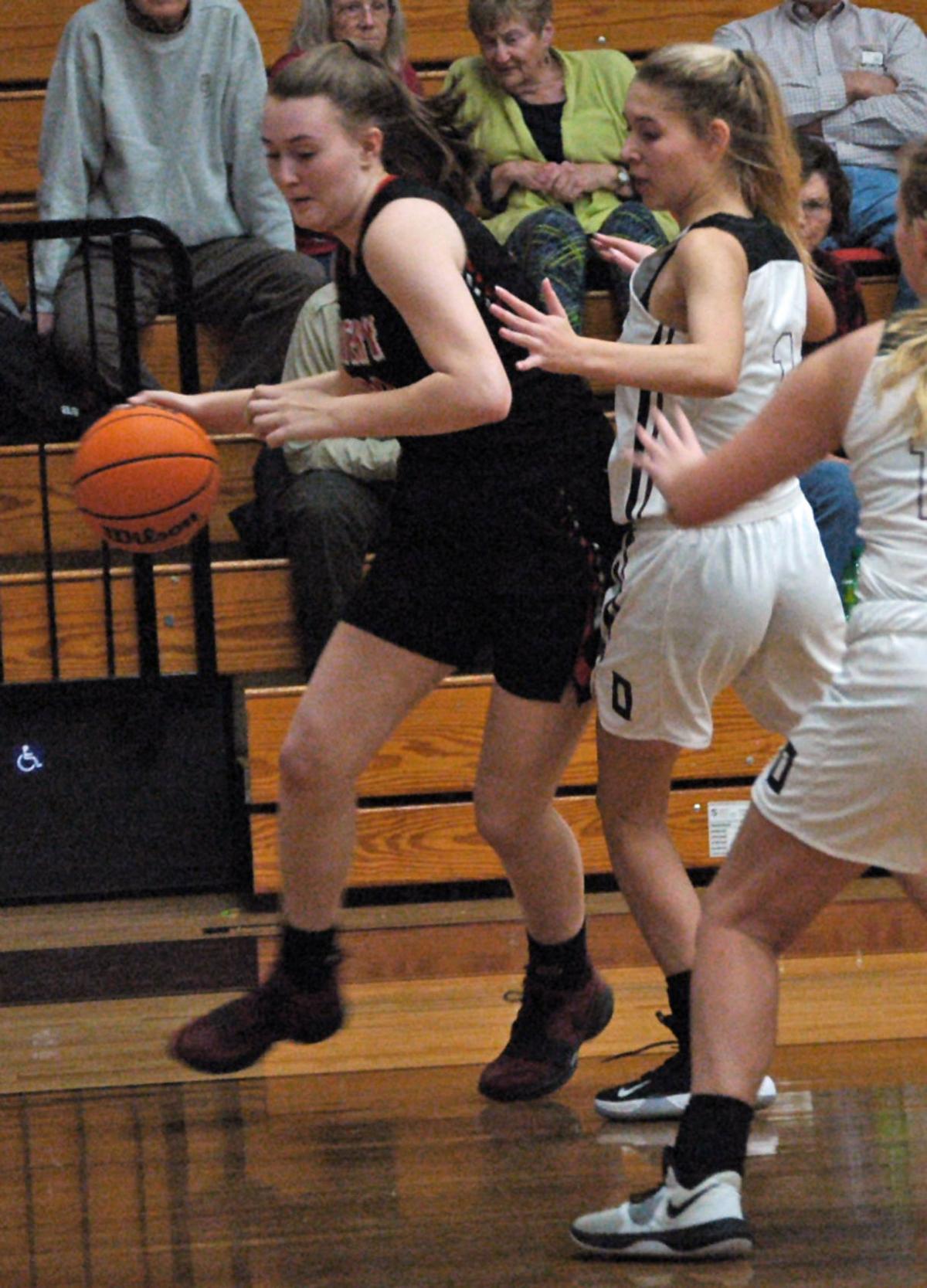 The Avery Lady Vikings closed out its regular season schedule with a pair of pivotal 1A conference home games, a Feb. 10 matchup with neighboring Mitchell for Senior Night and a Feb. 11 makeup game against Polk County. Although the Big Red was on the short end of the scoreboard in both contests, the Lady Vikings managed to survive and advance in a Western Highlands Conference opening-round matchup on Friday, Feb. 14, in Swannanoa, defeating the Owen Warlassies in overtime.

Avery opened the game with by scoring seven of the game’s first 10 points. Junior Reagan Hughes sank a three-pointer, with baskets from Brocco and Addie Beck in the period. Mitchell countered offensively with six points from Marley Cloer, with a pair of baskets by teammate Hannah McMahan that pushed the Lady Mountaineers to a narrow 10-8 lead at the end of one period.

Mitchell extended its lead to double digits by the end of the first half, opening the quarter with an 8-2 run as Cloer drained two additional three-pointers, with six points from McMahan. The tandem scored 22 of Mitchell’s 26 first-half points, while Avery could only muster a pair of baskets in the period, leaving MHS with a 26-15 advantage at the half.

In the third quarter the Lady Vikings drew to as close as six points, scoring the first five points of the period to get to within 26-20, but a 17-2 Mitchell scoring run over the final 5:27 of the quarter allowed the Lady Mountaineers to race out to a 43-22 lead after three quarters.

Lady Viking junior Alexis Stines scoring 10 of Avery’s 14 points in the final period, including a pair of three-pointers, but Mitchell matched the Big Red’s production over the final eight minutes to secure the win.

Stines led AHS with 12 points, with 11 points from Hughes. No other Lady Viking scored more than four points. Mitchell’s Cloer and McMahan scored 14 points each, with 10 points from Paige Johnson.

NEWLAND — The Lady Vikings looked to bounce back from its loss the previous evening when it hosted the Polk Lady Wolverines.

Avery did most of its scoring through the first eight minutes via the free-throw line, as it sank six shots from the charity stripe in the opening stanza. Polk countered with the offensive prowess of Olivia Overholt, who poured in 13 of the Lady Wolverines’ 16 first-quarter points, helping the visitors to a six-point lead after one quarter of play.

Avery’s defense slowed Overholt in the second quarter, but was unable to take advantage on its own offensive end, netting eight points for the frame and only two baskets in that span. Polk countered with a pair of baskets by Marissa Twitty and a basket by Sara Muse, while Overholt managed five additional points in the period to lift the visitors to a 27-18 halftime lead.

As the second half unfolded, the Lady Wolverines built a double-digit lead, as Overholt added a pair of baskets and teammate Tori Thompson connected on a three-pointer in the third period. Avery’s Addie Beck found space inside to score five points in the quarter, but the Lady Vikings found themselves trailing 42-25 with eight minutes remaining.

The story of the evening continued to be the dominant play of Overholt, who scored six points in the fourth quarter for a final total of a game-high 28 points, while addingsix steals, seven rebounds, and eight assists. Avery was only able to net one basket, a Hannah Crosby jumper, in the quarter, while the team made 8-of-13 free throws in the period.

Beck was Avery’s lone player in double figures with 11 points, with five points each from Brocco and Stines. Hughes and Mari Maya added four points each.

SWANNANOA — Avery opened up the Western Highlands Conference Tournament on the road on Valentine’s Day, traveling to take on the Owen Warlassies in the first round. The Lady Vikings showed no love to the Warlassies as the visiting opponent earlier in the season when it captured a 48-44 win at Owen.

In its return trip to the pony palace, the Lady Vikings again came up big with a crucial win, riding the hot hand of sophomore center Beck, who tied for game-high honors with 16 points as the Big Red prevailed to advance to the tourney semifinals, where it met regular-season champion Mountain Heritage in Burnsville earlier this week.

Unlike its previous two games, the Avery offense found rhythm from the outset. Stines scored two buckets for a five-point effort in the first quarter, while Maya chipped in with a basket off the bench to help spur the Big Red to a 12-7 lead after one period.

The second quarter was a combination of offensive struggle and defensive domination for both teams. Both clubs combined to score just seven points for the entire period, with Avery outscoring Owen 5-2 in the frame to extend its lead to 17-9 at halftime.

Owen’s leading scorer, Emma Larios, left the game temporarily with an injury in the second quarter, but returned to spark the Warlassies offense to start the second half. Teammates Miriam King and Hannah Larios also shouldered a portion of the offense for the home team, as Owen almost doubled its scoring output from the first half in the third quarter alone.

Avery suddenly was unable to get the ball to go into the basket during the Owen scoring spurt. A Hughes three-pointer and a Beck basket was the sum of the AHS point total in the third quarter as the Warlassies came back to take a 26-22 lead after three periods.

Showing a champion’s heart and the wisdom of experience gained throughout its season, Avery displayed poise in mounting a fourth-quarter comeback. Beck stepped up for the Lady Vikings with scoring in the paint, taking advantage of her height over the shorter Owen club to pour in seven points in the stanza. Brocco added a basket and Hughes netted a pair of free throws to boost the Lady Viking effort.

Owen was unable to extend or hold its lead down the stretch, missing two of its six free throws in the quarter that helped the Lady Vikings knot the game at 33-33 and send the game into overtime.

In the extra session, Beck continued to stay in the scoring zone, scoring six more points in the additional four minutes. Hughes and Cora Lee Hollifield each sank a pair of free throws in the overtime period, while Owen managed only three E. Larios points, a free throw by H. Larios and a three pointer by Miriam King to come up three points short.

Along with Beck’s 16-point performance, Hughes scored eight points, with seven points from Brocco. Stines chipped in with five points, with three from Lila Cantrell.