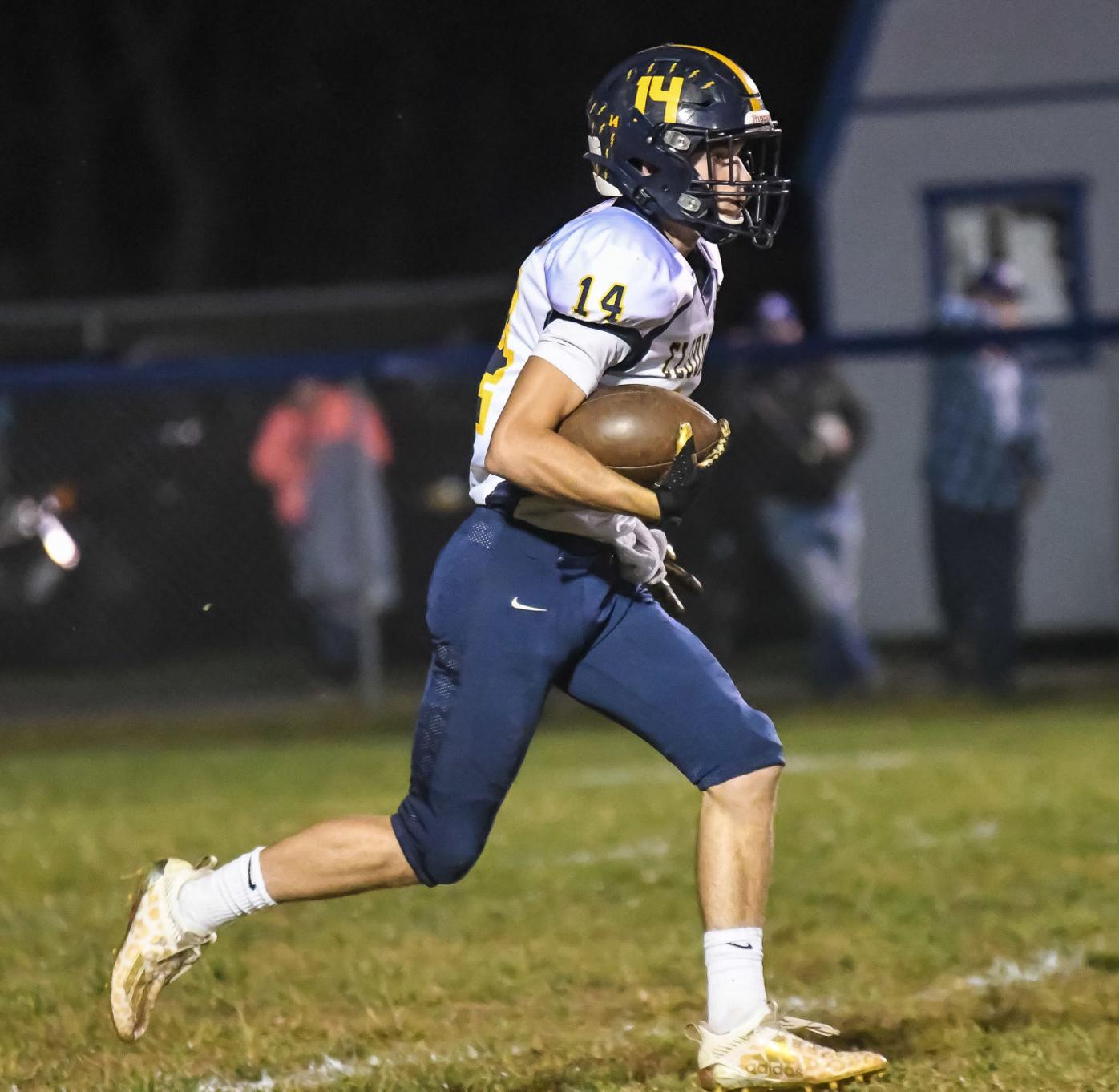 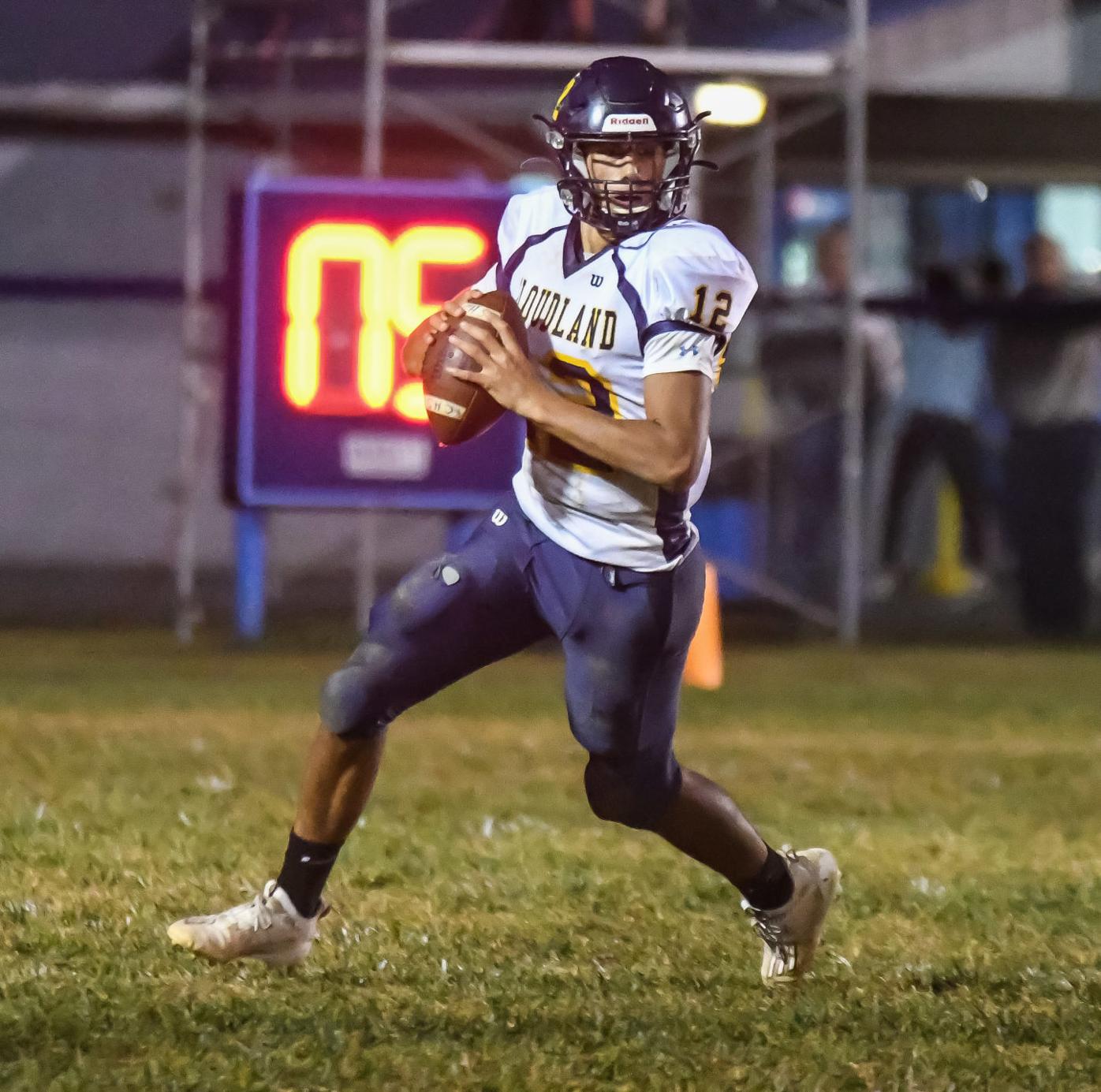 Gage McKinney rolls out with the football to pass during Cloudland’s road contest last week at Hampton.

Gage McKinney rolls out with the football to pass during Cloudland’s road contest last week at Hampton.

HAMPTON — In a hard-fought Carter County battle, Hampton had enough to win the second matchup of the season against Cloudland on Friday, Oct. 9.

Conor Jones scored five touchdowns to power the Bulldogs to a 44-14 win over a determined Cloudland in non-conference action. Hampton improves to 6-0 on the season, while Cloudland fell to 4-3.

It was a hard-hitting affair on both sides of the line of scrimmage from the opening kick. The Cloudland defense put the ‘Landers on the board first, as Caleb Sluder had a scoop-and-score that covered 96 yards. Gage McKinney caught a pass from Chase Shell to add the two-point conversion.

The Bulldogs, however, shook off the turnover and went back to work with a 15-play drive that covered 71 yards and ended in the second quarter as Jones scored on a 14-yard run with 9:40 left in the first half. The junior quarterback added the two-point conversion.

After the Hampton defense stopped a Cloudland drive in Bulldog territory with a Dylan Trivett interception, the Bulldogs moved efficiently as Jones hit Morgan Lyons for a 29-yard touchdown with 3:40 remaining in the half. Michael Harrison added the extra point.

Cloudland was unable to recover a loose ball on the ensuing kick, and Hampton struck on the very next play as Jonathan Greenwell caught a 34-yard pass from Jones for a touchdown.

Hampton pushed its lead to 29-8 with just more than a minute to play in the half, as Jones ran in from 11 yards out. The Bulldogs then opened the second half scoring on its opening possession, as Jones found Ryan Crumley for a 35-yard touchdown connection.

Cloudland refused to go down without a fight.

Gage McKinney picked up the ensuing kickoff and broke free for a 91-yard kickoff return for a score to close the gap.

The teams traded possessions for the remainder of the third period and opening portion of the fourth quarter—which included a Sluder interception. Hampton got back on the board with a little less than seven minutes remaining to play, as Aiden Vines scored on a 24-yard run and added the two-point conversion.

The ‘Landers continued to battle as they marched to the Hampton 1-yard line before a fumble ended the drive and allowed the Bulldogs to run out the clock.

Jones finished the contest with 16 carries for 117 yards, while going 10-for-15 passing for 195 yards. Vines tallied 15 carries for 56 yards, while adding 58 receiving yards. Lyons also had 58 yards receiving.

Cloudland saw Seth Birchfield finish with 105 yards on 20 carries. Shell added 37 yards for the ‘Lander cause.

‘Unique’ recruiting cycle has been bountiful for Arizona, but closing could be tricky