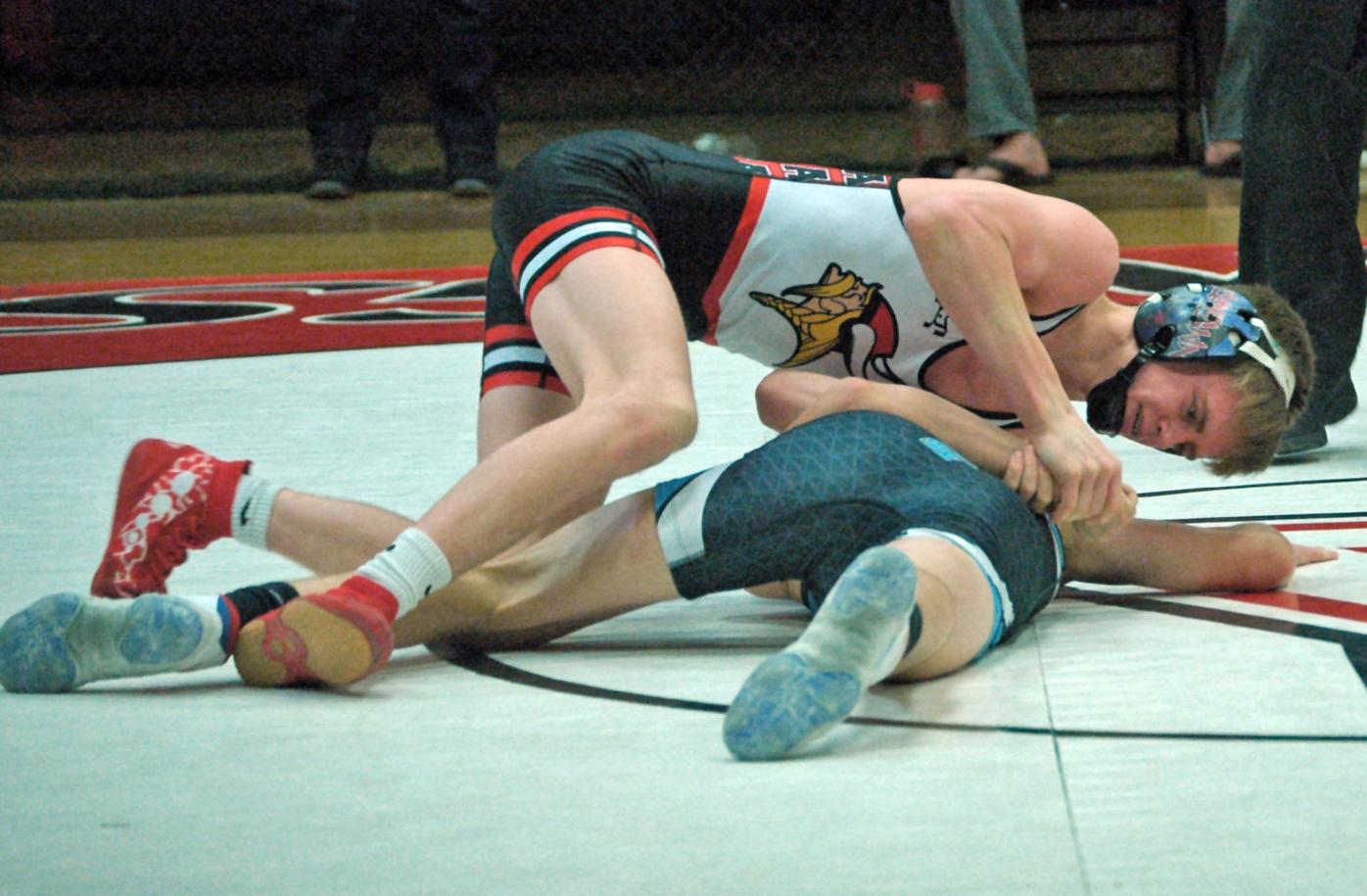 Grant Reece controls Watauga's Jacob Steadman in the 126-pound weight class in a home dual on Friday, May 14. Avery defeated Watauga by a 84-0 final team score in the match after defeating Polk County earlier in the event. 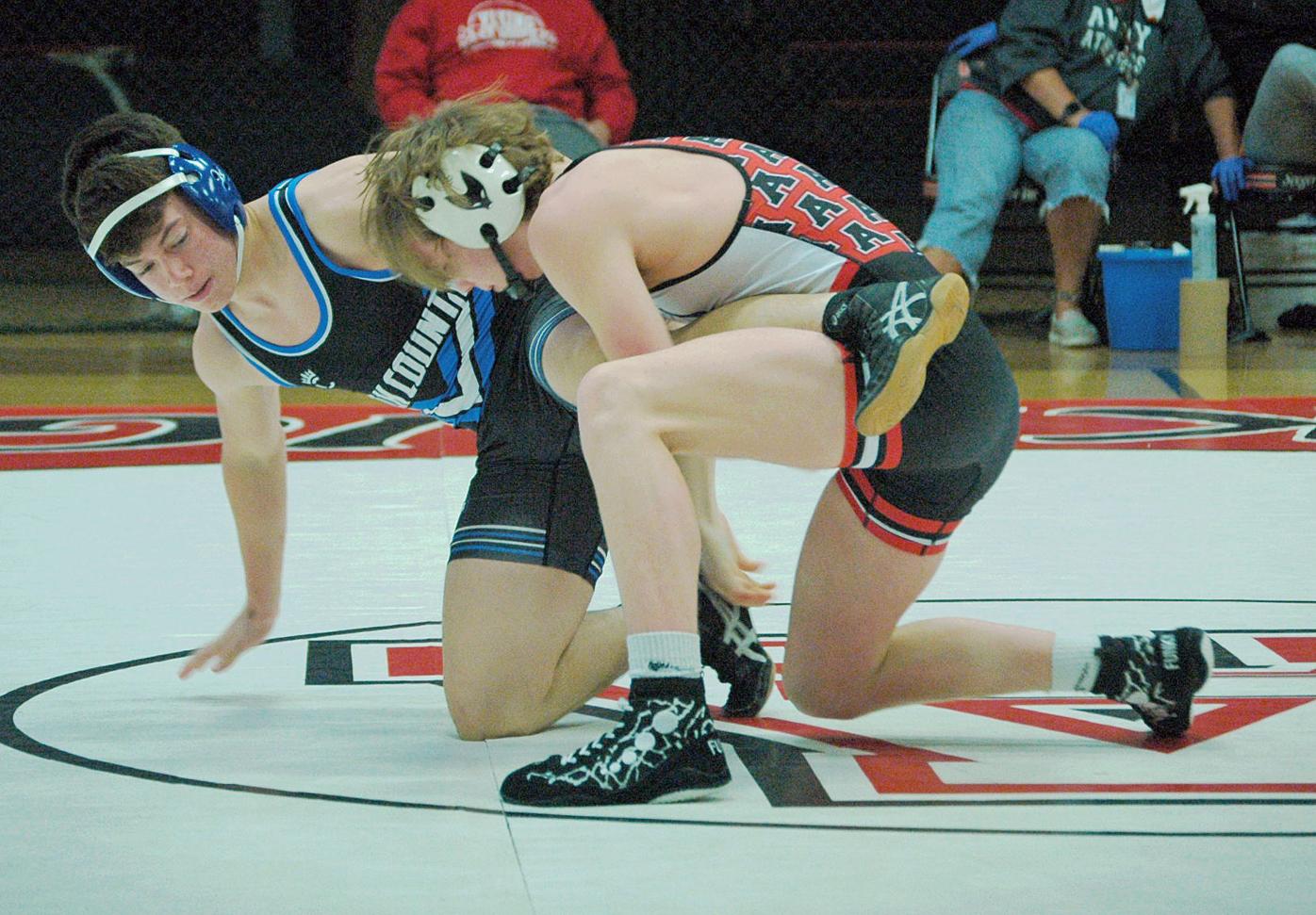 Avery’s Johnathan Cable takes down Polk County’s Deaken Nodine in the 145-pound weight class on Friday, May 14, at Viking Gym. Cable won by first-period pinfall as Avery upended the Wolverines 78-5 to remain unbeaten in conference competition. 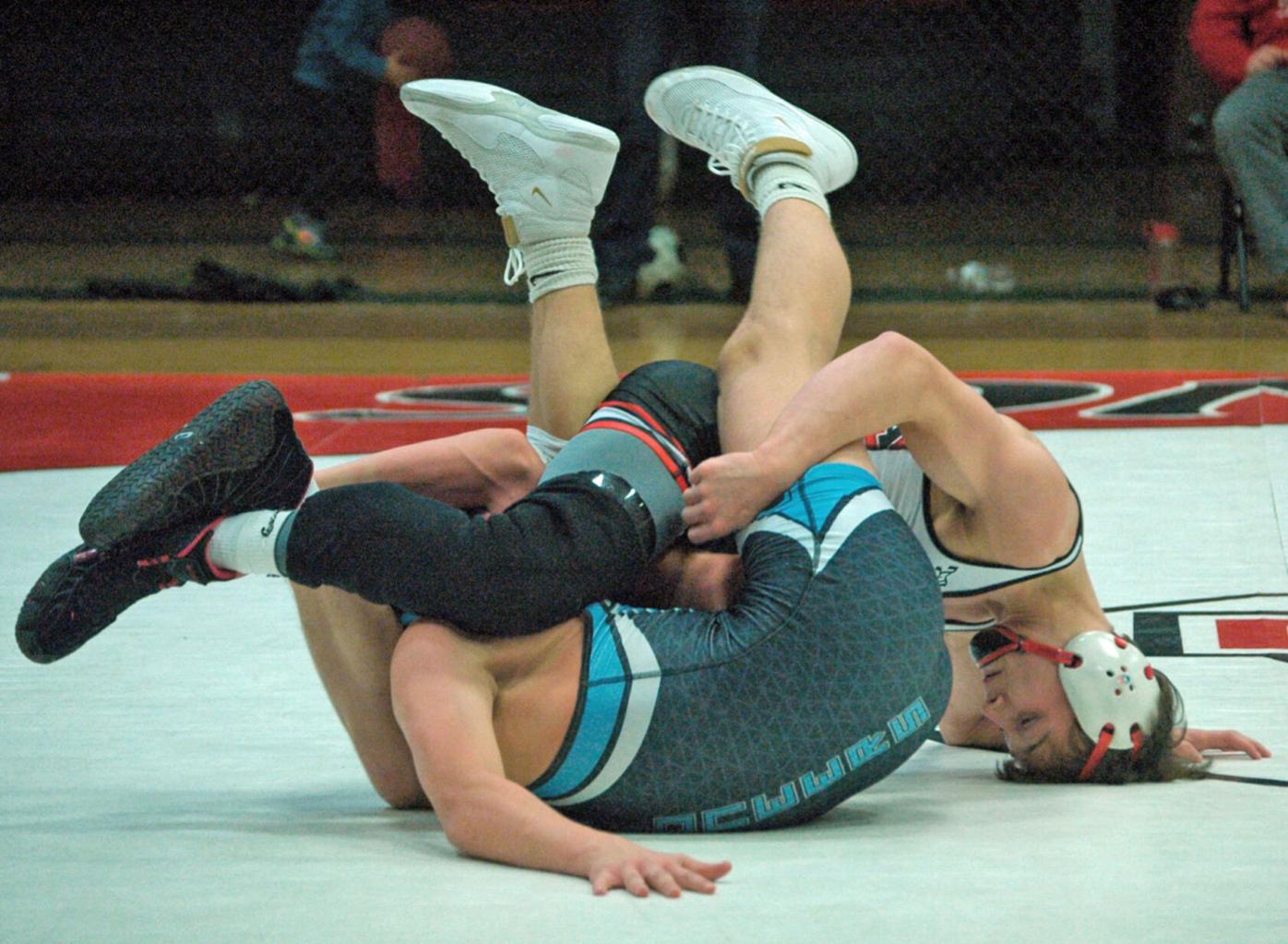 Defending Avery state champion wrestler Ethan Shell uses his lower body to control and pin Watauga opponent Daniel Russom in the 132-pound weight class during a dual meet on Friday, May 14. The Vikings shut out the Pioneers by a perfect 84-0 final score in the match. 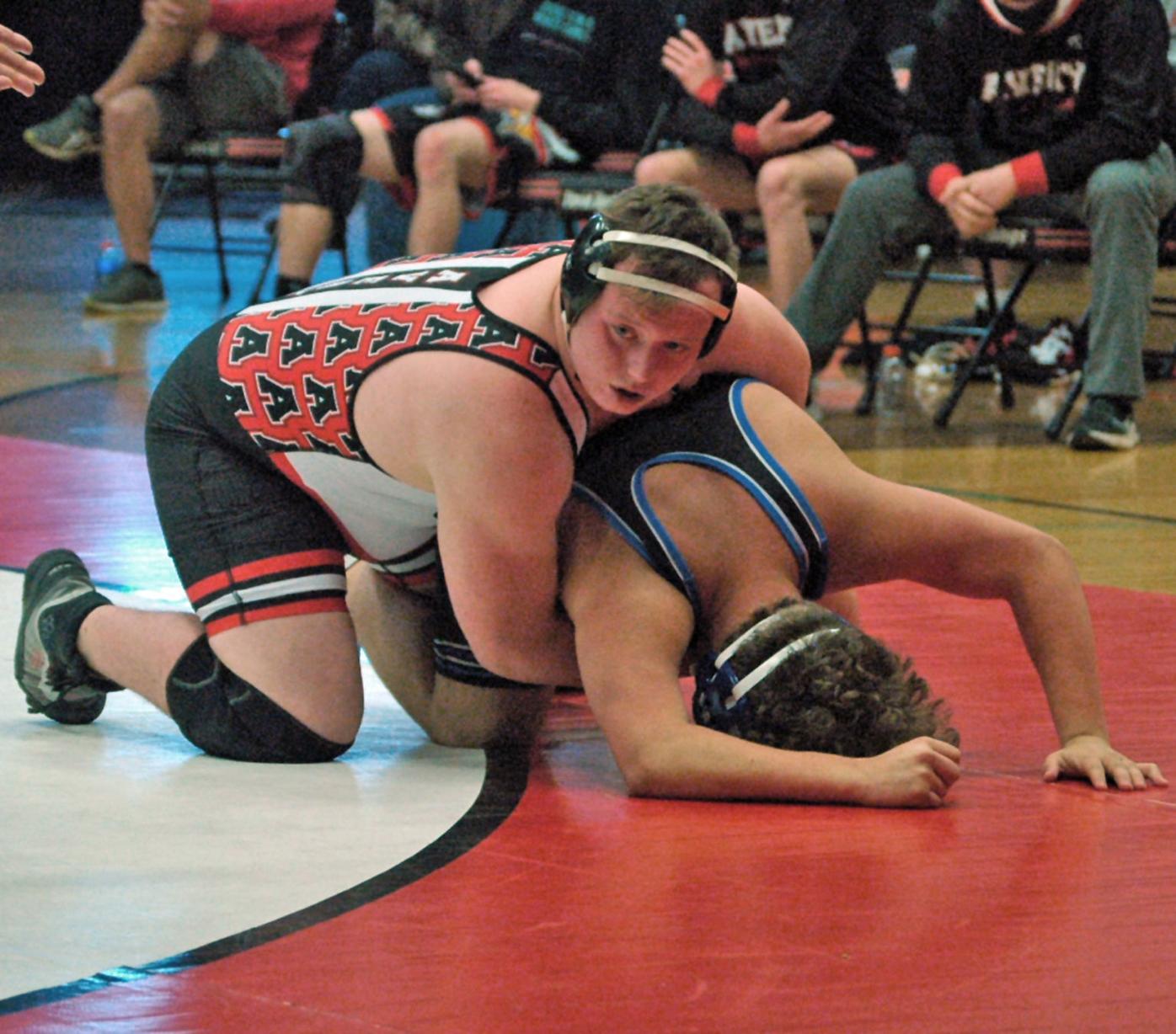 Grant Reece controls Watauga's Jacob Steadman in the 126-pound weight class in a home dual on Friday, May 14. Avery defeated Watauga by a 84-0 final team score in the match after defeating Polk County earlier in the event.

Avery’s Johnathan Cable takes down Polk County’s Deaken Nodine in the 145-pound weight class on Friday, May 14, at Viking Gym. Cable won by first-period pinfall as Avery upended the Wolverines 78-5 to remain unbeaten in conference competition.

Defending Avery state champion wrestler Ethan Shell uses his lower body to control and pin Watauga opponent Daniel Russom in the 132-pound weight class during a dual meet on Friday, May 14. The Vikings shut out the Pioneers by a perfect 84-0 final score in the match.

Avery High School’s wrestling team continues to make its mark and hit its stride moving into the meat of its season schedule. The Big Red dominated the Madison Patriots for a road dual meet win early last week, and finished the week with one-sided wins in dual-meet contests at Viking Gym over both visiting Polk County and Watauga.

MARSHALL — Making the lengthy bus ride to Madison, Avery made sure the visit was strictly business in dropping just one bout on the mat and surrendering a single forfeit to secure a one-sided win.

Bradley Parker earned a win by fall at 160 pounds for Avery, while teammates Dalton Towe (170 pounds) and Seth Blackledge (182 pounds), as well as Zach Vance (220 pounds) and Levi Andrews (285 pounds) won by forfeit. Madison’s James Calloway was the only Patriot to win on the mat, earning a second-period pinfall at 195 pounds.

NEWLAND — Avery welcomed the Polk County Wolverines for their final visit to Viking Gym as Western Highlands Conference foes on Friday, May 14. Polk defeated Watauga 49-15 to open the three-team round-robin event, but Polk’s dual with Avery was a one-sided affair from the outset.

Jordan (113) opened the match with a win by first period fall over Polk’s Saxton Tickle, while Wilson (120) earned his first career victory by pin over Polk’s Bryson Rickman.

Reece earned the quickest pin of the match at 126 pounds, defeating Polk’s Daniel Watkins in just 20 seconds. Shell continued his winning ways with a first period pin against Satchel McCoy at 132 pounds, while Hayes earned a pin in 53 seconds over Polk’s Collier Foster at 138 pounds.

Johnathan Cable was victorious at the 145-pound weight class, winning by pinfall in 1:21 over PCHS’s Deaken Nodine. Teammate Tristan Adams (152) earned a win by pin over Polk’s Bryson McCraw, and Parker (160) earned a forfeit win for the Big Red.

Towe (170) was a winner by third period pinfall over Polk’s Jacob Knighton, while teammate Seth Blackledge (182) also was victorious by first-period pinfall. Polk’s only victory on the mat came at 195 pounds, as Christopher Wilmoth earned a win by first-period pin over Avery’s John Hartzog. Avery’s Vance (220) won by second-period pin over PCHS’s Charlie Jackson, while Andrews (285) earned a forfeit win and Turja (103 pounds) won by third-period pinfall over Polk’s Tori Strickland. Polk also had a team point deducted from its score due to unsportsmanlike conduct during the match to account for the final margin of Avery’s victory.

For the final match on Friday, May 14, Avery flexed its collective muscle in blanking the visiting Pioneers on the scoreboard while scoring a perfect 84 points themselves as a team (14 total weight classes/bouts, multiplied by the maximum of six points for each bout via either pinfall or forfeit). According to Avery head wrestling coach Matthew Dunn, it is believed to be just the second time in memory that the Vikings have achieved the feat, the previous time believed to also have been against Watauga in the early 1990s.

The usual Viking suspects continued to flash their brilliance on the mat en route to victories. Wilson (120) earned a forfeit win, while teammate Reece (126) won by first-period pin over Watauga’s Jacob Steadman. Shell (132) won his bout with style over WHS’s Daniel Russom, using exclusively his lower body to first control, then pin his opponent.

Hayes (138) continued a string of impressive performances with a first-period pin over Watauga’s Brandon Francisco, while Cable (145) won by first-period fall over Tanner Hollars.

“The guys are wrestling great. Right now in our conditioning we’re at our peak performance, and are actually overtrained at this point. Our practices right now are as hard as they’re going to be for the whole year, so we’re going to start bringing it down a bit so their bodies actually feel better,” Coach Dunn said following the week’s matches. “We’ve got some guys out of weight class (who are) wrestling right now just to be able to get some matches in.”

With the curtailed regular season, coupled with single-elimination tournaments at the regional and state championships this season due to COVID-19, every match counts as the Vikings look to log mat time while also continuing to improve their collective craft.

“In the conference these guys are looking strong. It’s really hurting that we’re not getting some of the matches that we’d like, some of those six-minute, all-out grinder matches that we’re used to,” Dunn added. “Typically of all the divisions in North Carolina, Avery has the toughest schedule of anyone from 1A to 4A, and this year it’s hard to get those matches that will really pay off for us when we get to the end of the year, to prepare you for those deep runs in state tournament.”

The Avery head coach praised the effort from a couple of his grapplers in continuing to stay focused and fixed on season goals while exerting maximum effort each time on the mat.

“I think Dalton Towe is a perfect example of our team’s philosophy and mission. He didn’t start wrestling until very late, I believe it was into his ninth-grade year. He placed second in the state last year and is billed to be first or second potentially this year, he’s great in the wrestling room and an amazing leader. He’s one of the guys who really bought into the program and our system and just demonstrates consistency and getting a little better every day, which is what we’re looking for,” Dunn said.

“One of the things that Zach (Vance, who moved from the 285 to the 220-pound weight class after last season) has been telling us is how he has more gas in his tank this year,” the coach continued. “He knows he can wrestle for the six or seven minutes that he needs to wrestle for. He’s had a huge commitment to the program and his family is solidly behind him, taking him to all the places they can to give him opportunities to wrestle. He’s been wrestling down at around 215 pounds, and that’s a testament not just to diet, but to all of the work he’s been putting in. He’s one of those kids doing the cardio and training to get to the top level. It’s made him a better athlete, and you won’t find another kid with the heart that Zach has.”

Avery Wrestling traveled to Mitchell on May 17 for a tri-match against the host Mountaineers and a showdown with Robbinsville, and returned home on May 18 for a tri-match at Viking Gym against WHC foe Owen and visiting Reagan high schools.

“Our conference is set up this year to wrestle everyone else in the conference twice and we’re allowed only 14 matches, so we’re really hurting having to wrestle our conference again, so we aren’t going to have the normal range of opponents. But in our room we have a lot of guys where we’re able to simulate matches as much as possible, and some of the toughest matches our guys will have all season will be against their own teammates,” Dunn explained as the team continues its march to the postseason. “We can simulate tough matches, but there’s no way you can simulate what it is to be out there in a really tough match with the fans there and under the lights.”