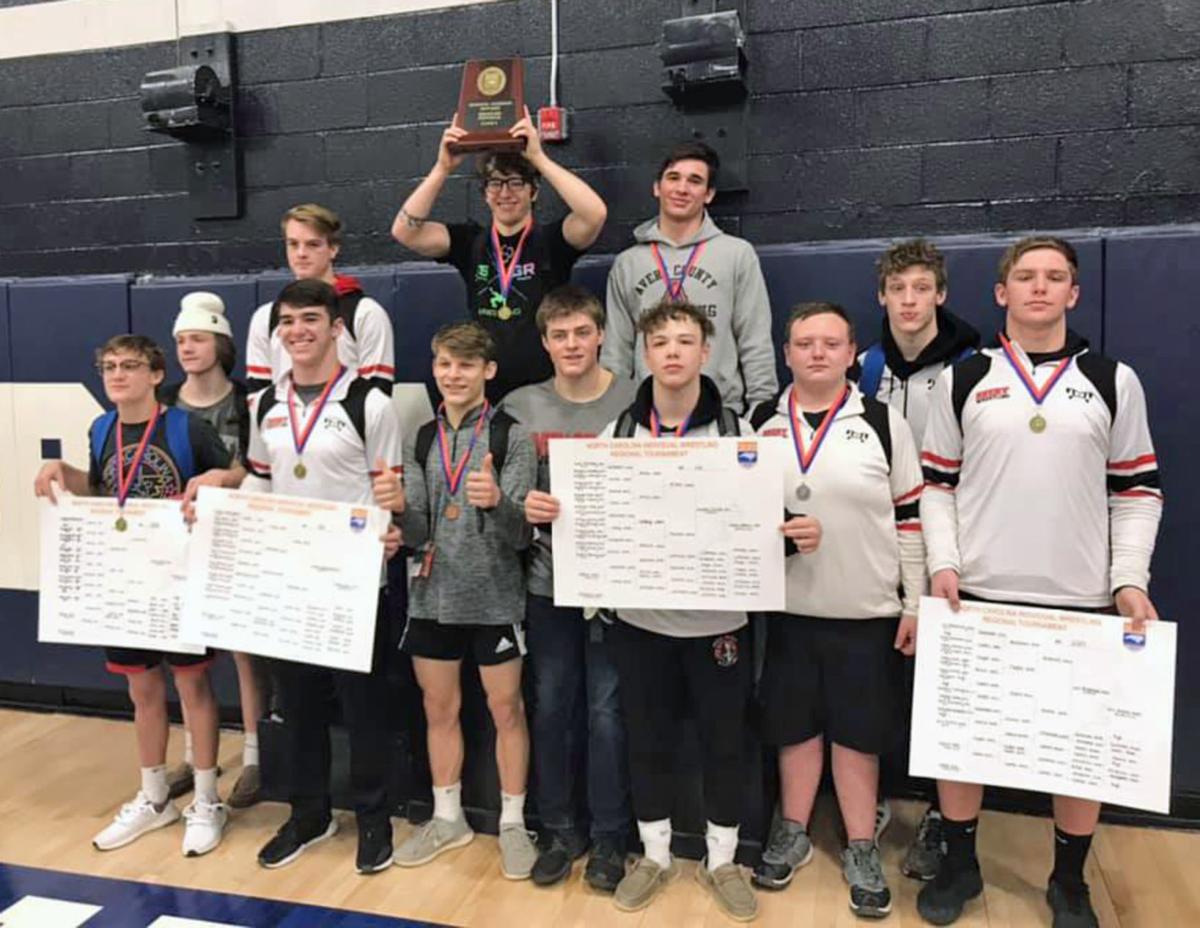 The Avery Vikings wrestling team poses with championship medals, brackets and trophies after prevailing victorious at the NCHSAA 1A Western Regional individual championships on Feb. 14 and 15 at Mount Airy High School. 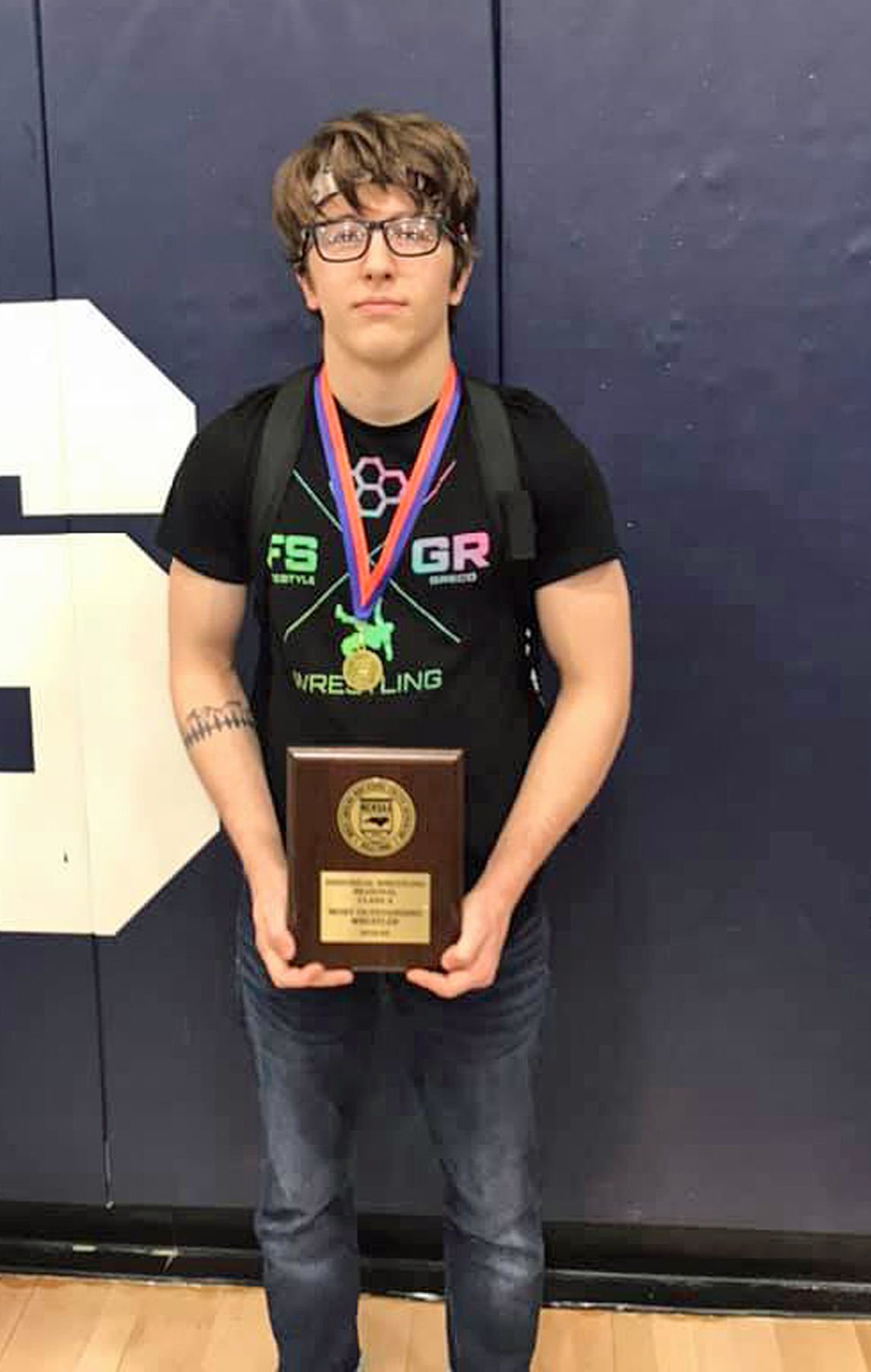 Avery 132-pound senior wrestler River Griffith captured another regional championship and was named the Most Outstanding Wrestler of the NCHSAA 1A Western Regional Tournament on Feb. 15.

The Avery Vikings wrestling team poses with championship medals, brackets and trophies after prevailing victorious at the NCHSAA 1A Western Regional individual championships on Feb. 14 and 15 at Mount Airy High School.

Avery 132-pound senior wrestler River Griffith captured another regional championship and was named the Most Outstanding Wrestler of the NCHSAA 1A Western Regional Tournament on Feb. 15.

MOUNT AIRY — Fresh off the euphoria of winning the school’s first team state championship in any sport with its 1A dual-team title last week, the Avery High School wrestling team carried the momentum to Mayberry, where nine Big Red wrestlers competed at the NCHSAA 1A Western Regional.

A total of nine Vikings punched their tickets to Greensboro for this weekend’s NCHSAA 1A State Individual Wrestling Championships, earning top-four finishes in their respective weight classes at the 1A West Regional on Feb. 14 and 15 at Mount Airy High School.

River Griffith added another regional championship to his mantel, as he swept the competition at 132 pounds, pinning Alleghany wrestler Koda Blythe in 17 seconds (quarterfinals), Bessemer City’s Christopher Moses in 36 seconds (semifinals), and pinned Polk’s Preston Burnett in 33 seconds in the final to earn not only the regional crown, but the senior also took home the 1A West Region Most Outstanding Wrestler Award for his performance.

Teammate Ethan Shell received an opening-round bye before winning matches by Mt. Airy’s Trevin Robinson and Hayesville’s Mason Cook both by fall to set up a showdown with Mitchell’s Dylan Lowery in the 120-pound championship. In that affair, Shell earned a 7-1 decision victory for his regional championship.

At the 152-pound weight class, Bradley Parker excelled with four victories to win the regional title. Parker defeated Hayesville’s Elijah Deese by first-period fall, followed by a win by 17-2 tech fall over Polk’s Jacob Knighton. Parker added a semifinal win by 16-0 tech fall against Swain’s Hunter Craig to advance to the regional title match against Cherryville’s Chase Miller, where Parker shut Miller out on the mat by 15-0 tech fall to win the championship.

Rounding out the championship medal winners were the Andrews brothers, Lucas and Levi. Lucas, wrestling as a senior at his final regional, won one match by forfeit, but captured his other three matches each by first-period pinfall, including his championship bout against Swain County’s Cody Long, for his championship. Sophomore Levi, defending 220-pound state champion, returns to the bright lights of Greensboro by virtue of three consecutive wins by fall, defeating hometown favorite Eric Olvera of Mount Airy in the championship bout in 2:35 to have his hand raised in victory.

As top-four finishers, another four Avery wrestlers secured spots on the bus to the Greensboro Coliseum for the individual wrestling championships. Junior Jonah Hayes earned a win in his first match by fall, but was defeated by fall to Swain County wrestler Jonas Trejo in the semifinal match at 126 pounds. Hayes wrestled back through the consolation bracket, earning a 13-5 major decision win against Union Academy’s Spencer Truesdale to qualify for the state tournament, and followed with a win by second-period fall over Hayesville’s Zane Lucksavage to bring home the bronze medal.

Teammate Seth Blackledge shook off a defeat in the state duals last week to bounce back and qualify for the state tournament. Blackledge won his first two matches at 160 pounds by pinfall, but fell by a 9-4 decision to East Wilkes wrestler Dustin Blackburn to drop into the consolation bracket. From that point, Blackledge wrestled back to earn third place, downing Mountain Island Charter wrestler Busi Abudu by first-period fall and capturing third place with a win over Cherokee’s Braden Taylor by first-period pin.

In the 170-pound weight class, Dalton Towe continued his positive momentum with four wins in five matches to earn a third-place finish. Towe pinned Mt. Airy’s Cameron Moore in the second period, then won a 5-3 decision over Cherokee’s Caden Pheasant to make the semis. Alleghany’s Dustin Rector sent Towe into the consolation bracket with an 11-4 decision win, but Towe was undaunted in winning his consolation semifinal match by second-period pinfall over North Stokes’ Mitchell Petree. In the third-place match, Towe tangled again with Pheasant, again defeating the Braves wrestler by decision, earning a 6-5 victory.

Sophomore Zachary Vance rounded out the Avery qualifiers with a runner-up finish in the 285-pound weight class. Vance received a first-round bye before winning by first-period fall over East Wilkes’ Cody Dowell. In the semifinals, Vance earned a second-period pinfall against North Stokes wrestler Orion Martin to make the championship match. In the finals, Vance ran into tough competition in Elkin’s CJ Henderson, who won by a 9-2 decision to force Vance to settle for silver.

In the overall team scores, the Vikings again outclassed the rest of the region, as it amassed a whopping 222 points to run away with the team title. The next best score was Swain County, with only 147 team points, followed by Robbinsville with 131.5 pounds. Rounding out the top five were host Mount Airy (118 points) and Cherryville (90.5 points). In Western Highlands Conference 1A totals, Polk placed sixth with 85.5 points, while Mitchell finished 11th with 59 team points.