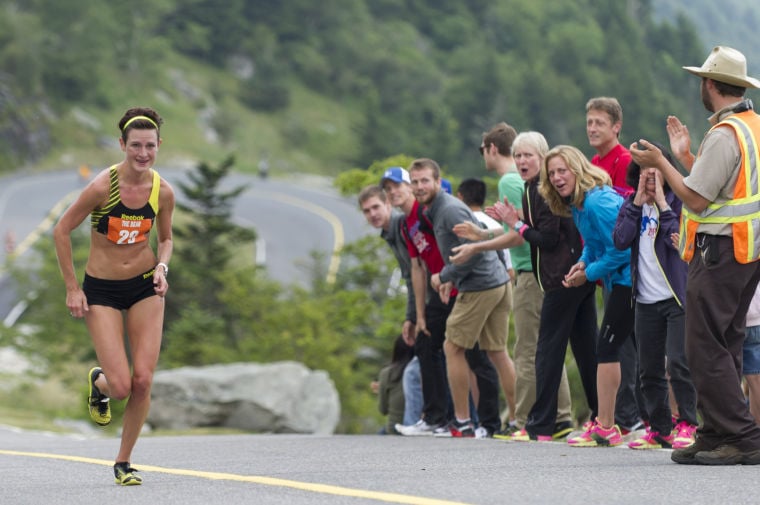 Mary Ballinger, 26, crests the final hill during The Bear on Thursday, July 10, setting a new women's record for the five-mile course. 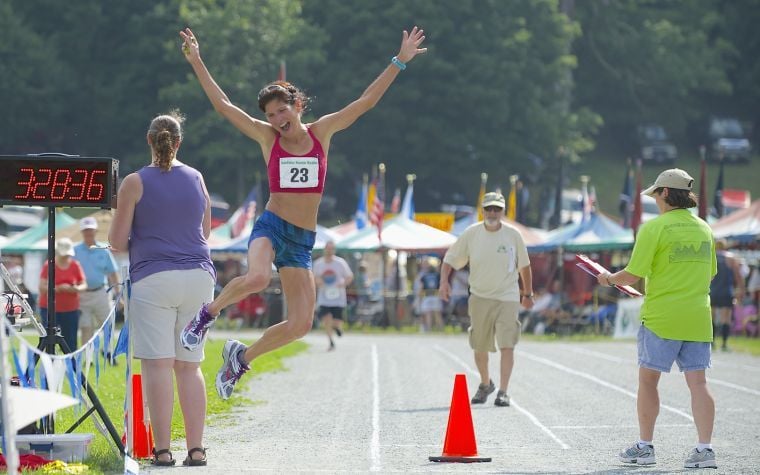 Annette Bednosky of Jefferson jumps for joy at the finish line of the Grandfather Mountain Marathon on Saturday. Bednosky was the first female across the line in a time of 3:28:35. 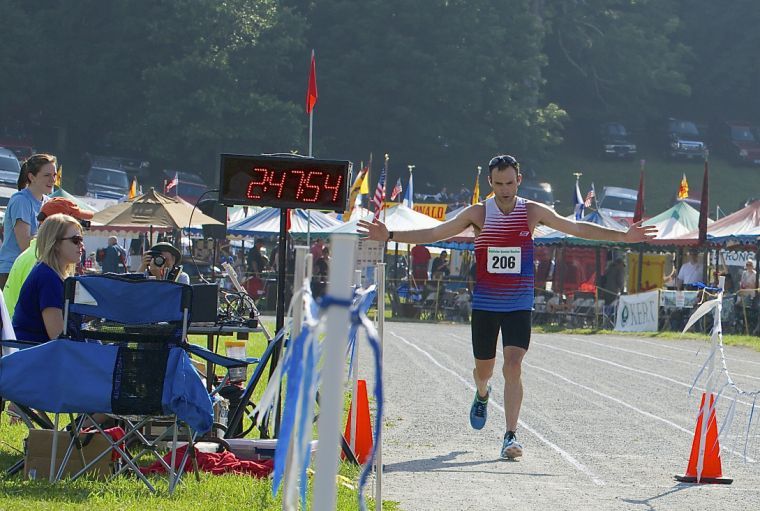 Mary Ballinger, 26, crests the final hill during The Bear on Thursday, July 10, setting a new women's record for the five-mile course.

Annette Bednosky of Jefferson jumps for joy at the finish line of the Grandfather Mountain Marathon on Saturday. Bednosky was the first female across the line in a time of 3:28:35.

New women’s record set during 20th running of The Bear

A Blowing Rock woman set a new female record Thursday, July 10, at the 20th anniversary of The Bear, the opening athletic event to the 2014 Grandfather Mountain Highland Games.

“I think this was one of the best races we’ve had with the weather," race coordinator Jim Deni said. "The weather was spectacular, and I think the times were fast because of that."

Mary Ballinger broke the female record by 1 minute, 13 seconds, with a time of 34:41.9. Ballinger, 26, has been a runner with ZAP Fitness, a training center for post-collegiate Olympic hopefuls, for about a year.

“The last two miles were extraordinarily challenging," Ballinger said, “but it was a lot of fun.”

Alisha Little, 33, of Drexel, finished second in the women's division for the second consecutive year with a time of 38:22.1. This time was about three minutes faster than her time in 2013.

Amanda Sorrow of Banner Elk rounded out the top three women with a time of 39:9.9. Sorrow, who was greeted with hugs and smiles from her 2-year-old son, said it was her first race after having the child. Sorrow said she did most of her training locally at the Williams YMCA of Avery County.

The overall first place finisher was Peyton Hoyal of Boone. The 25-year-old completed the race in 31:46.7. Hoyal, a return runner of The Bear, finished second overall in 2013 and returned to be the first across the finish line this year.

Noah Green, a cross-country and track athlete at UNC-Charlotte, captured second place with a time of 33:12.4. This was Green’s fourth year running The Bear. The 19-year-old has consistently decreased his time and improved his position during each running of The Bear.

“The most challenging aspect of the race is always hitting that first steep stretch around mile three,” Woods said.

The race began in Linville and ended five miles later at the base of the Mile-High Swinging Bridge atop Grandfather Mountain, an elevation gain of 1,568 feet. This year roughly 800 runners represented 24 different states and Canada, and they ranged in age from 7 to 77.

Boone resident Caleb Masland won the Grandfather Mountain Marathon on Saturday, July 12, a full 17 minutes ahead of his closest competitor, crossing the line in a time of 2:47:55.

But that doesn't mean the 26.2-mile race, part of the 59th annual Grandfather Mountain Highland Games, was easy, he said.

"It was tough — definitely the most challenging marathon I've ever run," Masland said.

Saturday was the first time participating in the event for Masland, 33, an accomplished athlete and running coach who runs for Sketchers Performance. A three-time competitor in the Boston Marathon who has also completed the challenging New River Marathon, Masland said Saturday's race was "much harder" than other marathons he has done.

The 47th annual Grandfather Mountain Marathon drew about 320 participants to the starting line at Kidd Brewer Stadium in Boone, putting them through the gauntlet before they finished amid thousands of cheering onlookers at MacRae Meadows in Linville.

"You start hearing the bagpipes ... and it really gave me a second wind — or a 10th," Masland said of the finish.

The first female finisher was Annette Bednosky, 47, of Jefferson, who finished in 3:28:35.

Fleming, the second man to cross the finish line, repeated what many runners echoed about the strenuous course.

"The scenery was really beautiful, but overall the marathon was pretty brutal," said Fleming, who was running the marathon for the second time.

It was also the second time running this event for Hitechew, the third-place finisher. An ultra-marathoner, Hitechew said he was used to running distances beyond the marathon length but said, "I'll always run this marathon."

The female finishers were equally impressive, including ultra-marathoner Bednosky, a frequent competitor in the Highland Games running events. In June, she also won the Critter Crawl, a 5K race up Grandfather Mountain.

Little, the second female finisher, also was the second-place female Thursday in The Bear, a five-mile foot race from Linville up Grandfather Mountain to the Mile-High Swinging Bridge.

The location was about the only thing the two competitions shared, she said.

"The marathon's a whole different animal than a five-mile run," she said. "The last two miles were real tough. I faked it 'til I made it."

Tsang, the third female to cross the finish line, said she tried to run conservatively at the beginning to save energy for the end.

"I try to think of it as 20 miles of warm-up and then six miles of do what you can," she said.

Despite exceptional efforts from the marathon runners, the course records still stand. The course record remains at 2:34:51, set by Michael Harrison in 1994. The women's course record was set at 3:01:54 by Patti Shephard in 1997.

Race Coordinator Jim Deni said he was pleased with how smoothly the marathon went Saturday. The race drew runners from 31 states and Singapore, and competitors' ages ranged from 15 to 75, he said.

The hilly race climbed from an elevation of 3,333 feet to 4,279 feet, a climb that adds to its reputation as one of the toughest marathons in the country.

"The trick to running this is if you attack it, you're going to blow up," Deni said. "If you go out hard and say, 'I'm going to crush this course,' it will crush you."