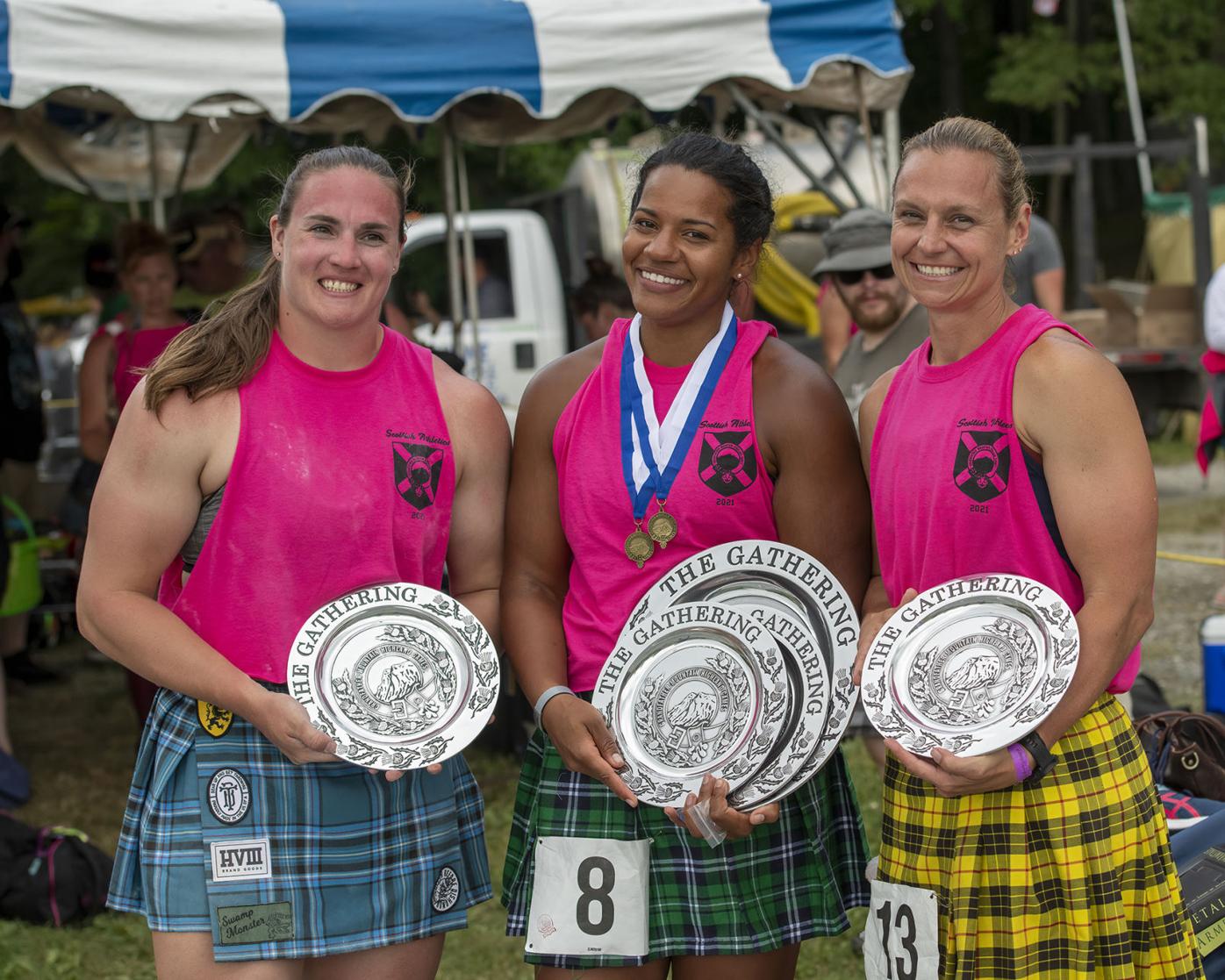 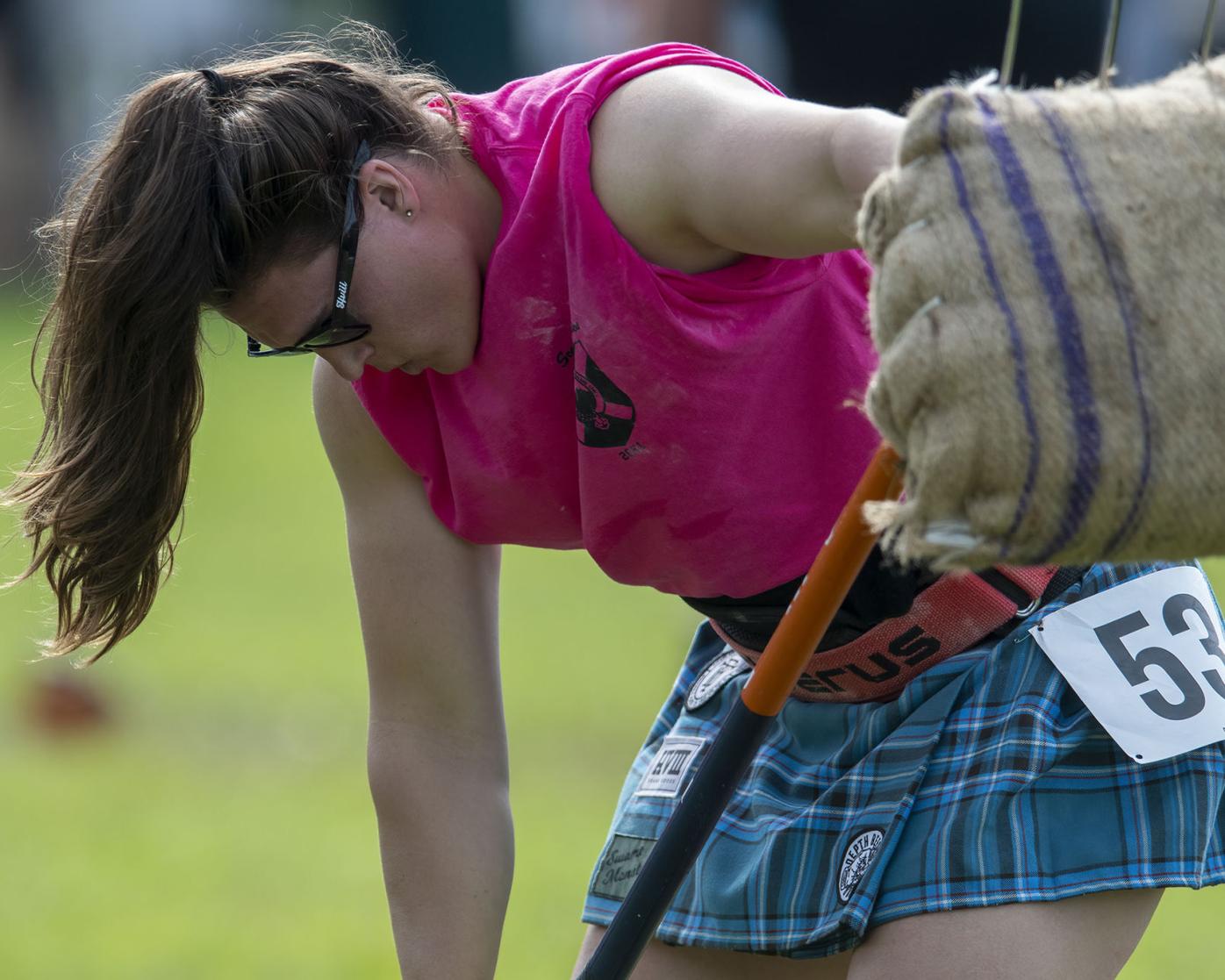 GRANDFATHER MOUNTAIN — In just more than a span of five years, the women’s heavy athletic division at the Grandfather Mountain Highland Games has grown from a group of three dedicated competitors to now attracting more than a dozen professional athletes from the across the country to participate in the weekend’s slate of ancient competitions.

Leading this group during the Elite women’s category on Saturday, July 10, was Elissa Van Vleck, a first-grade teacher from Fort Worth, Texas, who finished first overall after stringing together dominant performances in the 28-pound toss and the lightweight throw for distance.

Vleck previously won the GMHG in 2019, making her the back-to-back champion after the games were postponed in 2020 due to the COVID-19 pandemic. A prominent track and field athlete who specialized in shot put, discus and javelin while attending Aurora University in Chicago, Vleck began competing in Highland Games at the recommendation of her college coach.

“When I found another passion and tried to be a runner with five kids, that did not go well,” Vleck said. “So then my university coach told me to try the Highland Games, and I was like, ‘I don’t know what that is,’ but he gave me one practice, shoved me out the door, and said ‘Good luck.’”

Despite her championship pedigree, Vleck is always finding ways to do better. She is an avid weightlifter and runner, and she was even going to try out for the U.S. Olympic Team but decided against it since it was too expensive. She credits her improvement on her fellow athletes, who support one another and provide a family-like atmosphere as they travel to compete against each other at Highland Games across the country.

“This is a good fit,” she said. “You get to travel the world, meet a whole bunch of different people and make some lasting friendships that you otherwise wouldn’t have.”

The scene at the GMHG was strikingly different just five years ago when there only three women competing in the festival’s first-ever women’s heavy athletics competition. The expansion of the event to include world-class athletes like Vleck, can be due in large part to Amanda Ford, who was one of the first females to throw on Grandfather Mountain.

“We did a trial to see how it would go, and we won over the crowd pretty good. So we started inviting more women, and now we have a lot of pro athletes out there,” Ford said. “It’s pretty impressive.”

A former door gunner in the U.S. Marine Corps, Ford, of Wilmington, N.C., participated in a variety of sports while serving her country, but while competing as part of a Roller Derby team, Ford tore her ACL, which led her to enter into Scottish heavy athletics alongside her fiancé, Chris Chafin. She quickly fell in love with the sport.

“(In the past), women were always throwing on Fridays with the amateurs, because Saturday’s were primed for the pro athletes,” Ford said. “But this year is the first year that the women and the pros are throwing together on the same field. It’s come a long way.”

The event’s prominence at the Grandfather Games has attracted professional athletes like Hannah Linzay of Sommerville, Ala.

The second overall finisher on Saturday, Linzay is still relatively new to the sport, having attended the University of Louisiana-Monroe on a soccer scholarship. However, in only three years, Linzay has already made an impact in her new field.

Linzay previously entered the Professional “Strong Man” Competition and was the U.S. National Champion and World Champion. She set two world records along the way. In one event, she carried 305 pounds in each hand, or 610 pounds overall, over a distance of 16 and a half feet. She also carried 270 pounds a distance of 85 feet, in addition to tossing a 40-pound sandbag over an 18-foot high bar.

Prior to finishing third overall on Saturday, Adriene Wilson of Columbia, S.C., attended Ashland University in Ohio where she was a track and field athlete whose featured event was the shot put. In 2004, she trained professionally for the 2004 Olympics but finished fifth in the tryouts, falling just short of qualifying.

More impressive, however, was that a year before trying out of the Olympics, Wilson fought and overcame Hodgkins Lymphoma breast cancer. She has since competed as a Highland Games athlete for 13 years and has been a five-time women’s world champion.

Wilson said about her GMHG experience, “I loved the crowds. They park it in all day long. They knew us and cheered us on!”

The crowd was at its loudest when Wilson turned a 16-foot long, 85-pound caber (telephone-pole shaped log) perfectly end over end, the only competitor in the 14-woman field to completely turn it.