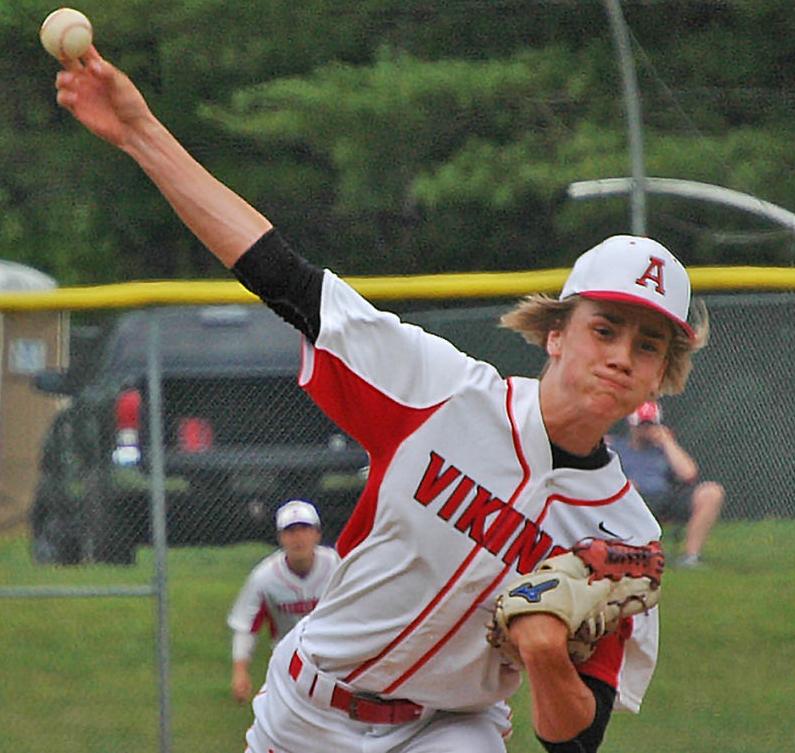 Avery starting pitcher Jackson Russ delivers a pitch to the plate in varsity baseball action against Polk at Viking Field on Tuesday, May 25. 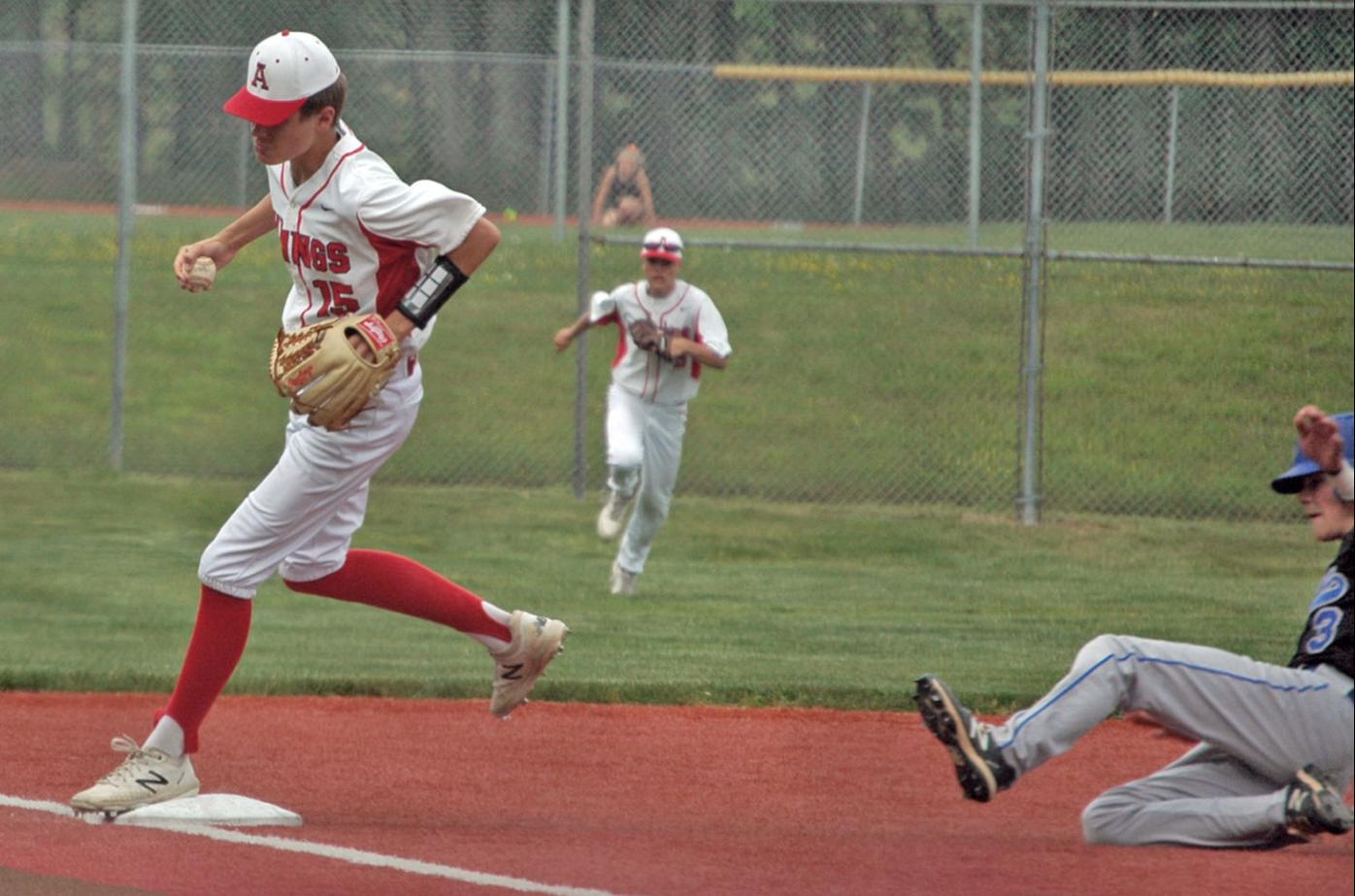 Viking third baseman Trent Wellborn tags a base for a force out of Polk's Alex Tipton during Avery's varsity baseball game in Newland on May 25.

Avery starting pitcher Jackson Russ delivers a pitch to the plate in varsity baseball action against Polk at Viking Field on Tuesday, May 25.

Viking third baseman Trent Wellborn tags a base for a force out of Polk's Alex Tipton during Avery's varsity baseball game in Newland on May 25.

Avery baseball continued its conference slate with home-and-home matchups with the Polk County Wolverines. The Vikings were unable to keep pace with the Polk offense, dropping both matchups in shortened games due to the NCHSAA 10-run mercy rule.

NEWLAND — Avery Vikings varsity baseball welcomed the Polk County Wolverines to town on Tuesday, May 25, for what will be one of the final matchups between the schools as Western Highlands Conference foes, as PCHS is slated to move to a new conference this fall.

On a cloudy and intermittently rainy afternoon, the opening innings served as a pitcher’s duel between Viking right-handed starter Jackson Russ and Polk southpaw pitcher Micah Hill. The Polk offensive juggernaut came to life with an eight-run fourth inning and a four-run fifth frame to break a tie score and pull away for a 13-1 five-inning win.

The Vikings offense struggled to find an answer for Hill, as the lefty surrendered only two hits, both from AHS senior center fielder Ty Smith, in a complete-game effort, striking out eight. Avery’s Russ matched Hill on the mound through three innings, giving up only one run. In total, Russ pitched 3.2 innings, striking out six Wolverines.

Following a scoreless first inning, Polk broke through on the scoreboard as Angus Weaver hit a 1-2 pitch over the left field fence for a solo home run and 1-0 PCHS advantage. Avery answered in the bottom of the frame, however. Viking third baseman Trent Wellborn reached base on a fielder’s choice and scored on a two-out error at first base to knot the contest at 1-1.

The teams remained deadlocked until the top of the fourth inning when the floodgates opened against the Big Red.

Jackson Beiler reached on an error to open the frame and was the first of seven consecutive Wolverines to cross the plate, with the big blow coming off the bat of center fielder Alex Tipton, who blasted a grand slam over the left center-field fence. In all, Polk scored two additional runs following the big fly, with Avery’s Kevin Carter coming on in relief to close out the inning, leaving the visitors with a 9-1 lead.

Hill was energized by the offensive support, retiring the Viking side in the fourth inning in order and holding AHS in check before receiving four additional runs of support in the top of the fifth inning. Avery was unable to plate runs in its final at-bat to prevent the calling of the game after five innings due to the 10-run mercy rule.

In junior varsity action, the JV Wolverines escaped Newland with a 6-0 victory.

COLUMBUS — Avery made the long road trip to Polk County for a rematch with the Polk Wolverines. The Vikings again met a hot-hurling pitcher in Polk starter Coble Cameron, however, as he held the Big Red to just one hit over six innings, striking out 10 and walking just one hitter.

The Wolverines offense opened an early first-inning lead and finished with a three-run sixth inning to close out the contest.

Avery’s lone hit of the matchup was from Ty Smith, who laced a two-out single in the top of the third.

Polk (5-5, 4-2) scored four runs in the bottom of the first off Avery starter Chandler Berry to grab a lead the Wolverines would never lose. Berry surrendered three hits and six runs over one and one-third innings, striking out one. James Harris and Bryson Whitley entered the game in relief, throwing three and two-thirds innings and one-third of an inning, respectively, in the matchup.

Polk loaded the bases in the first inning with one out on an Edwards single and walks for Weaver and Cameron. Beiler drew another walk to force in one run, with Hill following with another walk for a 2-0 Polk lead. Chan Barber ripped a base hit to center to plate two runs and make it a 4-0 advantage.

Beiler rapped a two-run double in the second to up the lead to 6-0, with Cameron’s sacrifice fly in the third inning upping the Wolverine lead to 7-0.

Beiler opened the bottom of the sixth with a double and scored on Michael Simoncic’s pinch-hit double. Barber singled and Shane Parris walked to load the bases with no outs.

A walk to Lawson Carter was followed by a Brad Marcello sacrifice fly increase the lead to 10-0 and close out the game.

Avery’s JV Vikings avenged a loss earlier in the week to the Wolverines in picking up a victory in Columbus prior to the varsity matchup.

The varsity Vikings fell to 1-5 (1-7 WHC), and will return to action this week, hosting Owen on June 1 and traveling to Swannanoa on June 4.