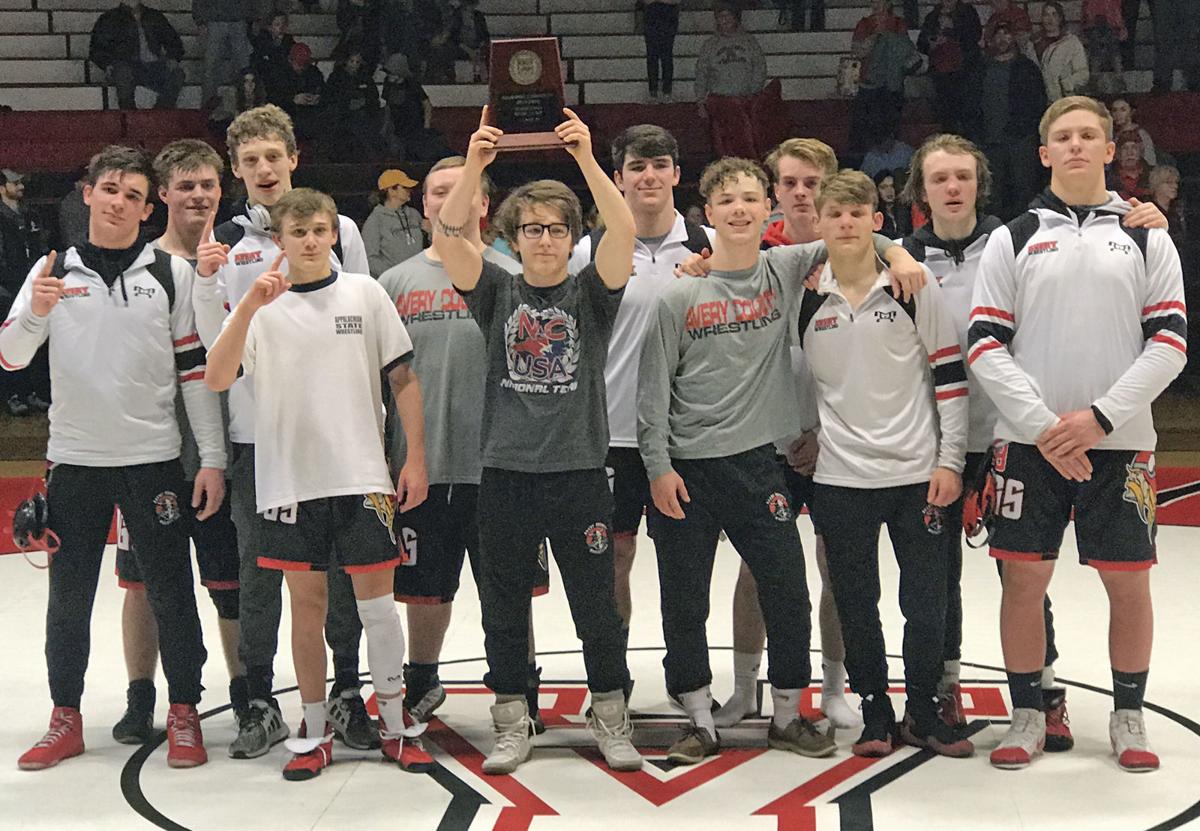 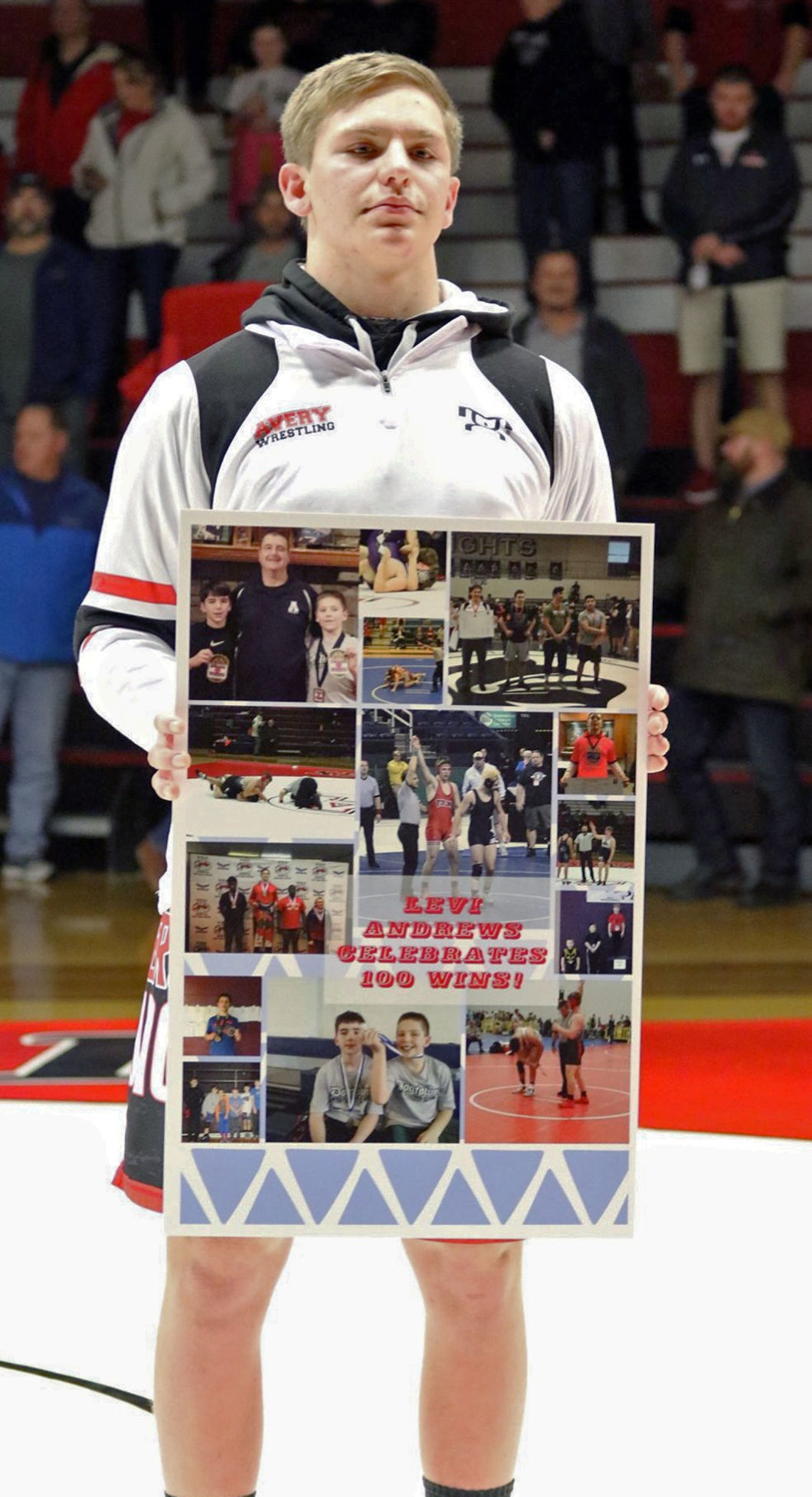 Avery sophomore wrestler Levi Andrews earned his 100th win during the Western regional finals dual meet against Robbinsville in Viking Gym. He was honored after the match with a commemorative poster by family, teammates and friends. 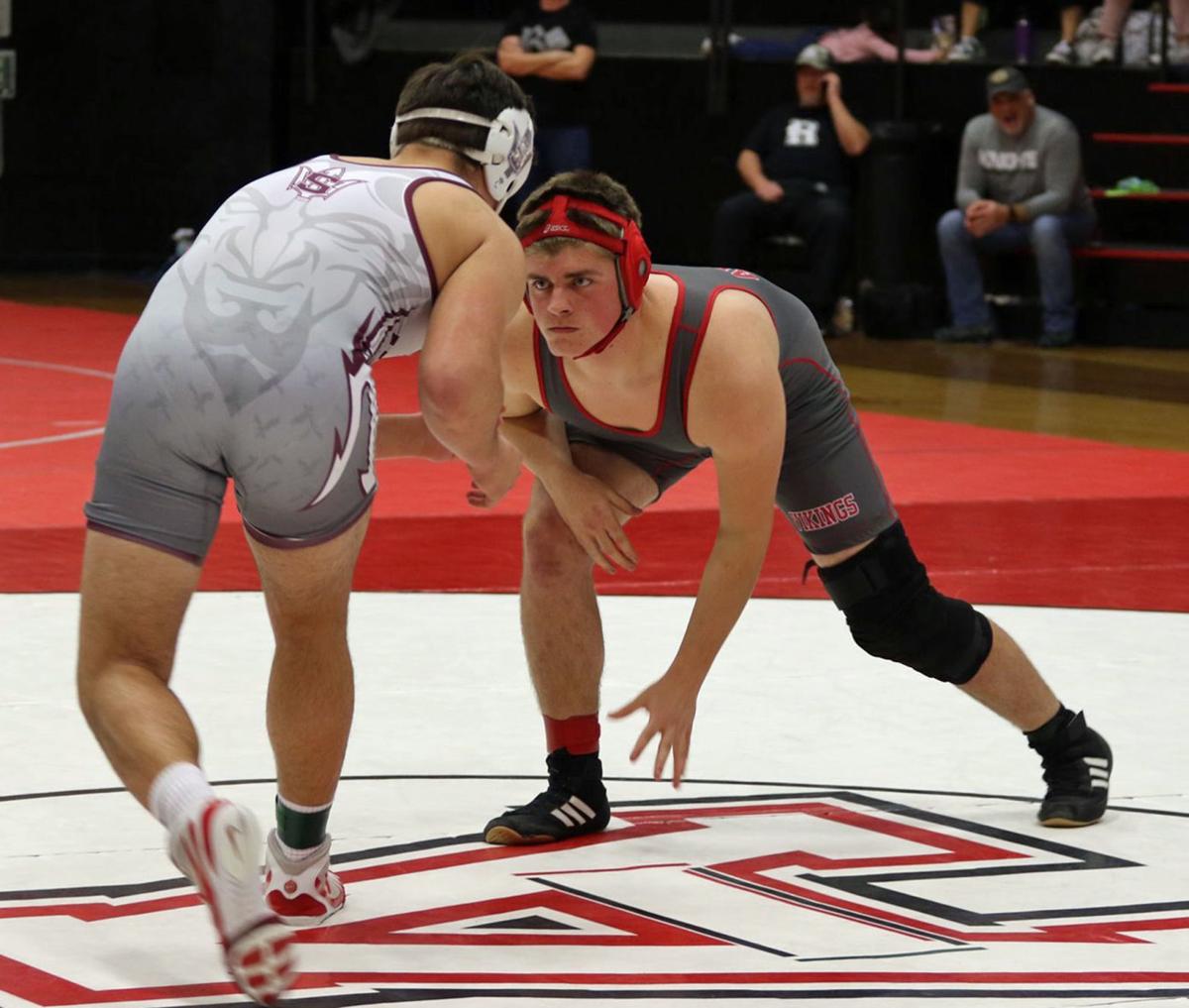 Avery senior wrestler Dakota Hudson earned a decision victory in the NCHSAA 1A Western Regional Championship to punch the Vikings' ticket to Greensboro.

Avery sophomore wrestler Levi Andrews earned his 100th win during the Western regional finals dual meet against Robbinsville in Viking Gym. He was honored after the match with a commemorative poster by family, teammates and friends.

Avery senior wrestler Dakota Hudson earned a decision victory in the NCHSAA 1A Western Regional Championship to punch the Vikings' ticket to Greensboro.

NEWLAND — As Avery entered last week seeking to earn a 1A Dual Meet state wrestling title, the team was fortunate enough to never have to leave the friendly confines of Viking Gym, as the school was awarded hosting privileges to Bradford Prep and Andrews in the opening round of the state playoffs on Tuesday, Feb. 4, before the winner faced the Big Red the same evening.

The Vikings advanced to round three, and hosted Swain, South Stokes and Robbinsville in Big Red Country for the 1A West regional semifinals and finals Feb. 6, where the Vikings punched their ticket to Greensboro and proceeded to rewrite history.

Once Andrews defeated Bradford Prep in round one, the task toughened considerably when the Wildcats tangled with the Vikings. Avery won every contested bout, only dropping points by forfeit in a pair of matches, as well as an additional point for an unsportsmanlike conduct offense to provide for the final margin of victory.

Each Avery wrestler, with the exception of Johnathan Cable who picked up a forfeit win at 145 pounds, was a decisive winner in their bouts over Andrews opponents, winning their respective bouts by pinfall. Only one bout of the entire dual meet extended into a second period, where Jonah Hayes pinned Andrews opponent Cade Vaughn in 2:42.

Two evenings later in the third round, Avery welcomed a formidable foe in the Swain County Maroon Devils out of the Smoky Mountain Conference. Swain put up a formidable fight in Avery’s closest dual meet of the entire tournament, but managed to earn a hard-fought team win.

After surrendering its customary forfeits at the 106- and 113-pound weight classes, respectively, the Vikings went to work on the mat. Ethan Shell earned a pinfall win in 43 seconds, with pinfall wins by teammates Hayes (126 pounds) and River Griffith (132 pounds). Tristan Adams battled and scrapped at 138 pounds but came up short in a 9-3 decision to Swain wrestler Nathan Brock. Johnathan Cable also met a tough challenge in Swain opponent Lucas Brown, who managed to pull off a 6-4 decision victory for the Maroon Devils to tie the match at 18 points apiece.

The teams traded pins at 152 and 160 pounds, respectively, as Bradley Parker earned a second-period in his bout, but Seth Blackledge lost by fall to keep the match tied at 24-24. Needing momentum, the Vikings upper middleweights came through. Dalton Towe continued to show his tremendous advancement from last season with a 15-5 major decision win over Swain’s Damian Lossiah, while teammate Lucas Andrews showed why he is a top-ranked wrestler in his weight class, pinning Swain’s Charlie Lambert in 27 seconds to push the Big Red to a 34-24 advantage.

Swain’s Cody Long earned a win by pin at the 195-pound weight class over Avery’s Dakota Hudson, while Viking Levi Andrews answered with a second-period pin over Swain’s Thomas Allen to lead 40-30 and allow Avery to forfeit the 285-pound bout to Swain to rest heavyweight Zachary Vance and to conclude the match.

After Robbinsville dispatched of South Stokes, the stage was set for a colossal showdown pitting the two most dominant 1A schools in the western half of North Carolina.

Avery gave up six points by forfeit at 113 pounds to open the match, but Shell quickly tied the match at 120 pounds, earning a pin in 1:06 over Knights opponent Luke Wilson. At 126 pounds, Hayes won by fall in 1:16 against Willie Riddle, followed by Griffith winning in 22 seconds over Robbinsville’s Nick Anderson to lead 18-6.

Adams earned an 11-5 decision to lead 21-6, but Robbinsville rallied to cut into the lead when Nathan Fisher earned a win in overtime-sudden victory 4-2 in an evenly matched showdown against Avery’s Cable. Parker won by third-period pinfall at 152 pounds, but Robbinsville earned a pin at 160 pounds, leaving the Big Red with a 27-15 advantage.

Towe battled to an 11-3 major decision win over Robbinsville’s Jaret Panama to lead 31-15, while teammate Lucas Andrews won his match by fall in 27 seconds over RHS’s Ben Wachacha for a 37-15 lead.

At 195 pounds, Robbinsville looked to make their final push to challenge the Vikings, but senior Dakota Hudson rose to the occasion, using a late reversal to pick up a 6-5 decision over No. 2 state ranked Knights wrestler Carlos Lopez and the points necessary to clinch the regional championship, sparking united elation from the Vikings fans and faithful.

“That kid has gone through injuries and hard times, and he never quits,” Avery head coach Matthew Dunn said of Hudson’s effort. “He’s the type of kid that you want your own children to model. He’s a great student and great person. He’s so respectful and he never quits, especially what he’s went through this season. It’s fitting that the match came down to him. We all believed in him and lifted him up, and I think the emotion on his face after he won the match got to all of us.”

With the outcome no longer in doubt, Avery forfeited the 220-pound class, while Levi Andrews bumped up and earned a forfeit win at 285 pounds. The victory was the 100th career victory for the sophomore Andrews, which was recognized after the match’s conclusion.

“Swain and Robbinsville are both great teams,” Dunn added after the regional title win. “It’s a great moment to celebrate what these kids have done. These kids have been wrestling together and working since they were tiny children. This community has supported them so much and it means so much to this community. It’s just awesome, but also time for us to look ahead at what we have to do next. This is just a tough team that fight like brothers, but love each other like family. What’s special about this team is they make each other better and we don’t have a selfish group. They run and pull and bring each other up. They buy into one another and that makes them a special team.”

As Packers ready — virtually — for Year 2 of Matt LaFleur's offense, will odd offseason stunt its growth?