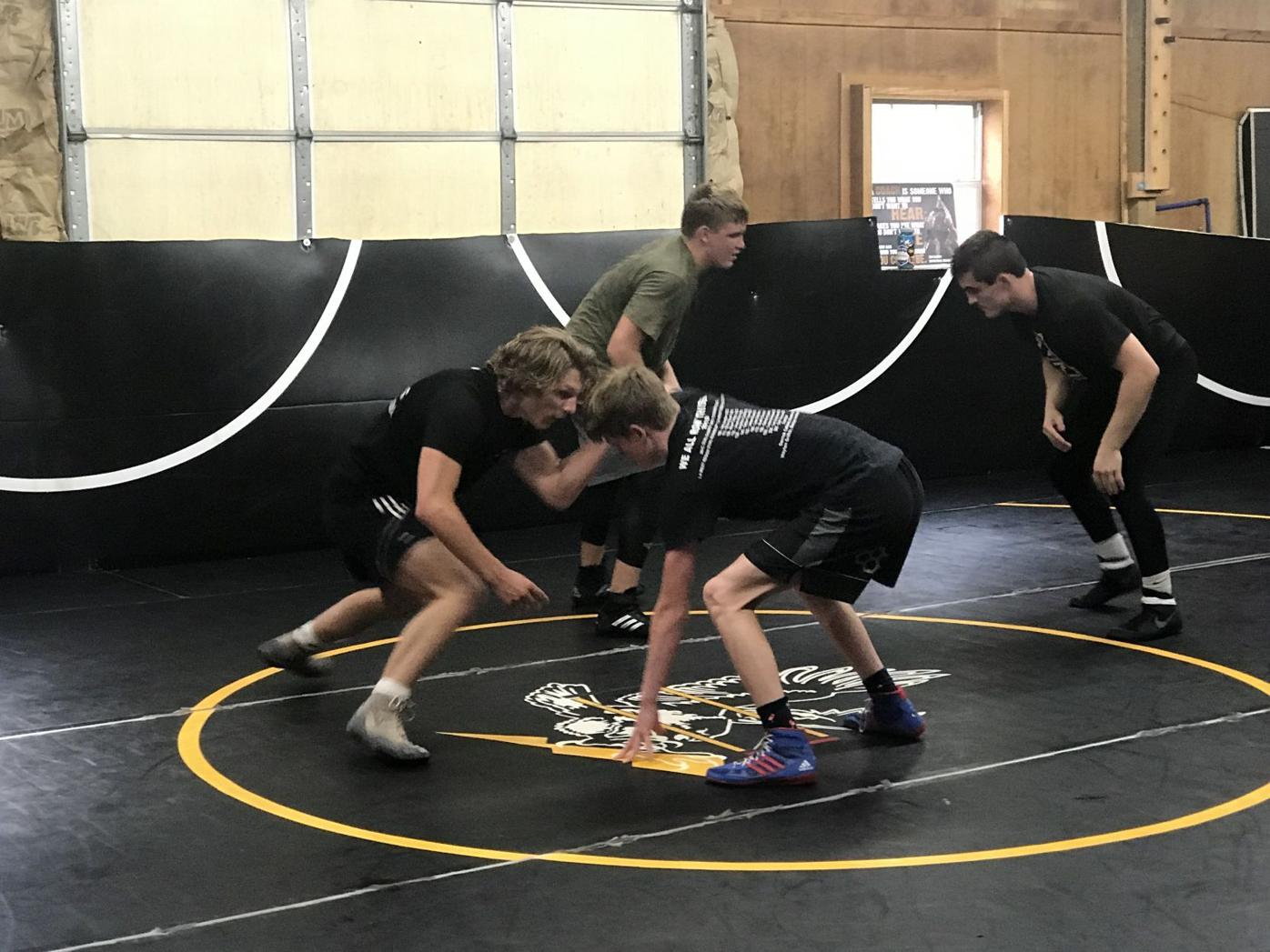 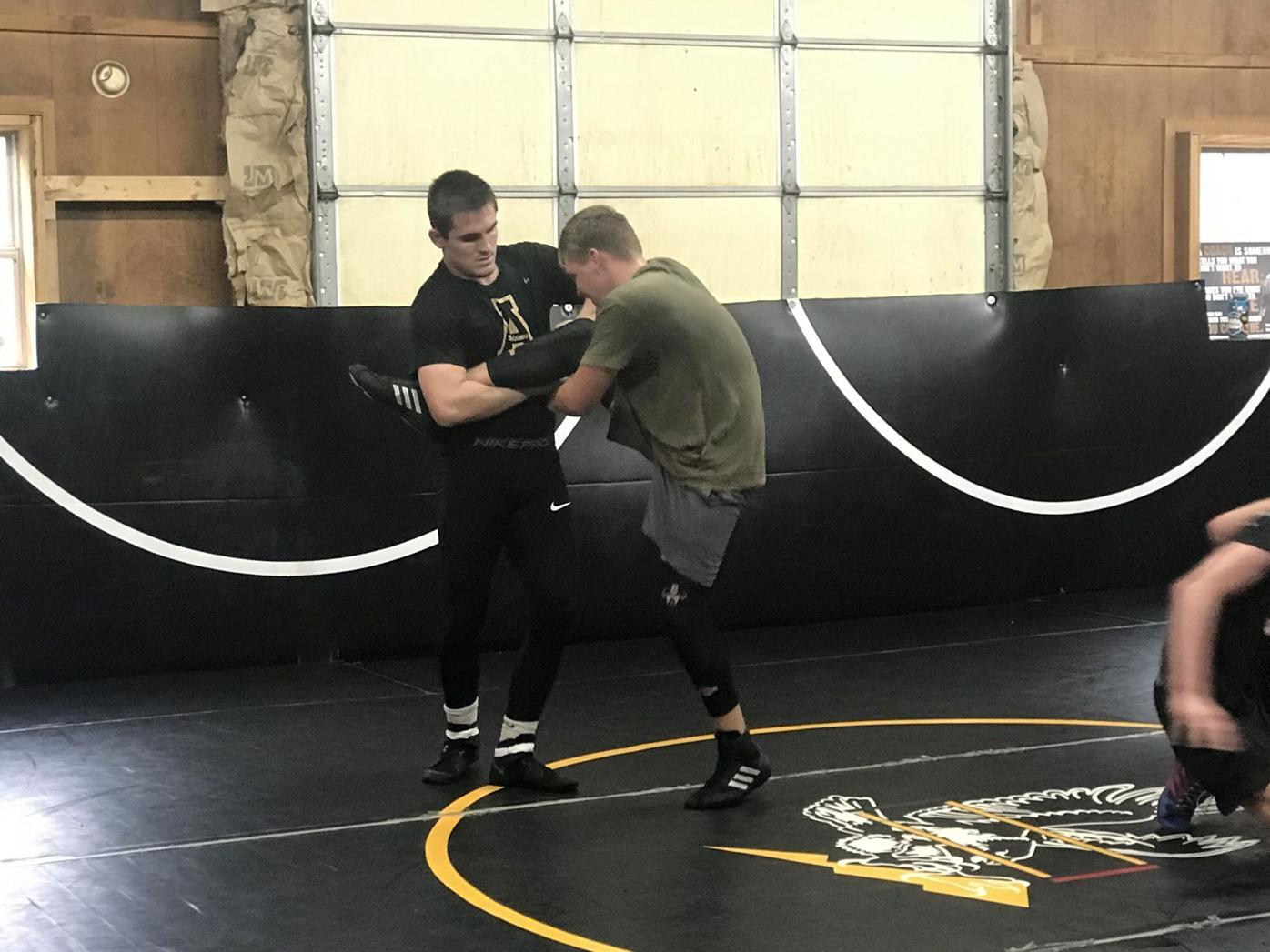 Appalachian State wrestler Barrett Blakely takes a leg during a training session at Dogtown Wrestling Club on September 18 at its facility in Newland. 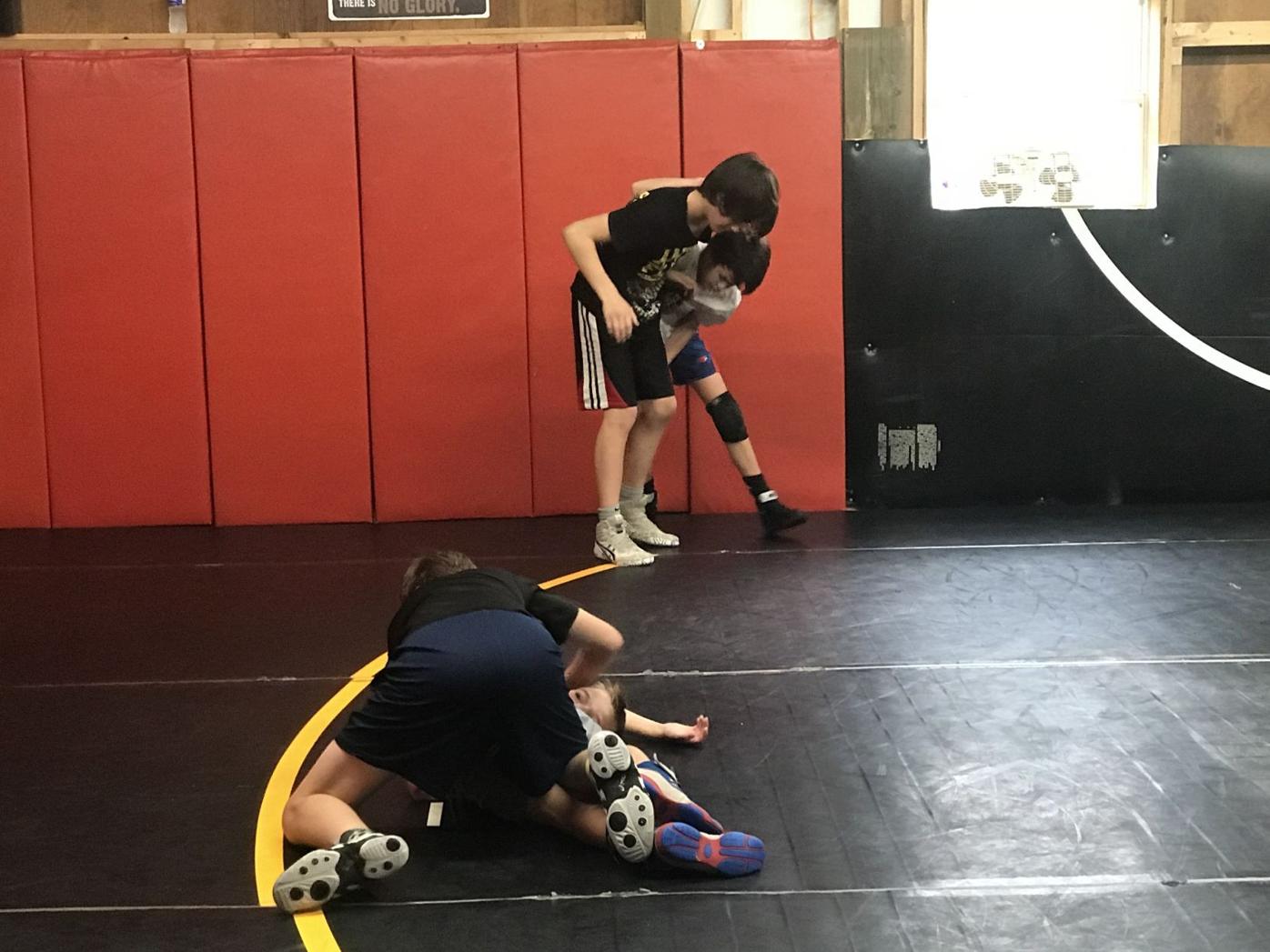 Wrestlers of varying ages take part in the DWC practices and events, offering skills to help students to excel in not only wrestling, but additional sports. 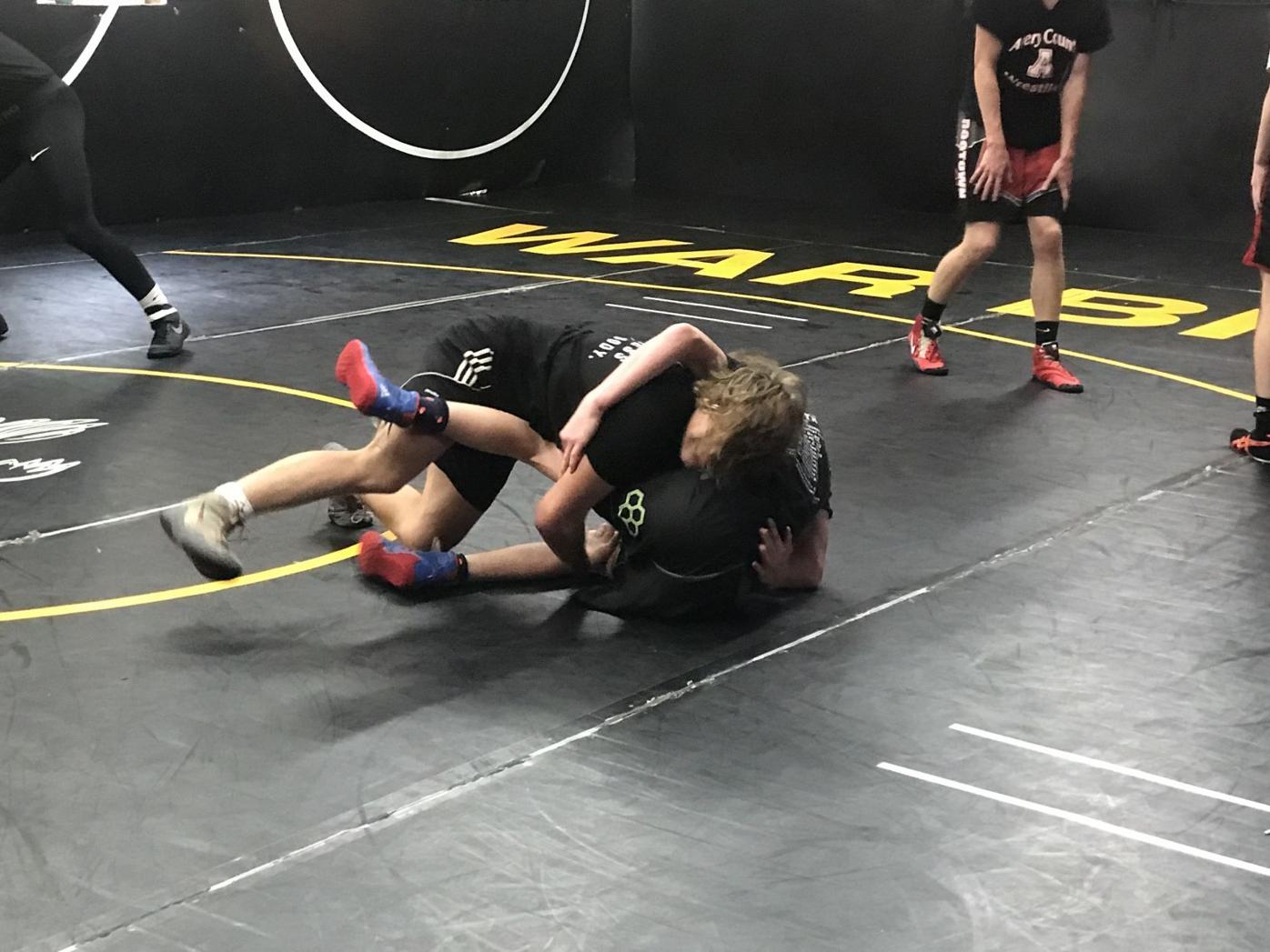 Jonah Hayes executes a takedown during a training session at Dogtown Wrestling Club. The club has adhered to stringent health protocols to ensure safety for participants as students learn grappling skills on the mat.

Appalachian State wrestler Barrett Blakely takes a leg during a training session at Dogtown Wrestling Club on September 18 at its facility in Newland.

Wrestlers of varying ages take part in the DWC practices and events, offering skills to help students to excel in not only wrestling, but additional sports.

Jonah Hayes executes a takedown during a training session at Dogtown Wrestling Club. The club has adhered to stringent health protocols to ensure safety for participants as students learn grappling skills on the mat.

NEWLAND — After a pedigree of several seasons of standout wrestlers, alongside a tangible influence in the Avery High School wrestling team’s recent pair of state championships and multiple individual state champions for the better part of the past decade, the paw print left on local grappling by Dogtown Wrestling Club is indelible.

During the unprecedented time for school athletics due to the COVID-19 pandemic, the high school wrestling season has been delayed for several months to give the sport its best opportunity to resume competition on the mat in the spring. With the restrictions placed on high school wrestling organized team activities, DWC has sought to safely help fill the gap left by the circumstances, as youngsters meet at the DWC warehouse on Miller’s Gap Road to participate in training activities to help teach the sport and foster a passion that will help perpetuate its local popularity and sustain the sport’s continued growth in Avery County.

“I can’t overemphasize how important it is for the kids to be able to have these activities, developing skills for other sports, such as football and whatever else,” said Dogtown youth coach and Avery High School Head Wrestling Coach Matthew Dunn.

Overseeing the DWC program is Avery native Kevin Foster, who was an outstanding prep wrestler in his own right in the early 1990s and has served as an assistant coach for multiple seasons with the high school wrestling program.

DWC has also had the opportunity to bring in a number of seasoned wrestlers to serve in a teaching and mentoring capacity. Among those working with youth wrestlers are a pair of Appalachian State wrestlers, redshirt sophomore Barrett Blakely, as well as teammate and fellow redshirt sophomore Will Formato. Both collegians are coached by legendary Avery High School wrestler and current head coach of the App State wrestling program, JohnMark Bentley.

Blakely, a two-time high school state champion in Alabama, was named Most Outstanding 7A Wrestler in the Alabama State Wrestling Tournament, finishing his prep career a perfect 53-0 and holding an overall prep record of 182-20. Blakely won 14 matches at the 174-pound weight class for the Mountaineers in 2018-19, finished fourth at the Pembroke Classic, and was a member of the Southern Conference Academic Honor Roll.

Formato finished his 2019-2020 season in Boone with a 24-14 record as a redshirt freshman, was named to the Southern Conference All-Freshman Team, and reached the finals in the SoCon Championship Tournament.

Formato earned 11 wins in dual meets last season, including an overtime win over NCAA qualifier Dazjon Casto of The Citadel. He placed second at the Appalachian Open, third at the Mountaineer Invitational and sixth at both the Wolfpack Open and the Keystone Classic. Formato won 22 matches and a Pembroke Classic title at 157 pounds, and was a member of the Southern Conference Academic Honor Roll in 2018-19.

During his prep career, Formato was named Marietta Daily Journal/Cobb County Co-Wrestler of the Year after a 40-0 record and winning the Georgia Class 6A state championship at 145 pounds at Allatoona High School in Ackworth, Ga.

With high school wrestling off limits at the current time, Coach Dunn has also been lending a teaching hand with DWC. Dunn was himself an undefeated high school state champion and was a two-year captain of the wrestling team at UNC-Greensboro. In addition to Avery, Dunn has coached at Gold Medal Olympic Training Center, UNC-Pembroke and Belmont Abbey College. He was also head assistant coach at Parkland High School for four dual-team and individual state championships.

“Both Barrett and Will have insane resumes to help our local wrestlers. Where I can’t work with the high school team currently (due to COVID), I’ve been helping with the youth program, while they’ve been doing the high school programming with us,” Dunn said. “These guys are role models for our younger wrestlers and their program, and are both captains at App. We’re fortunate to have them as part of our program.”

Although the pandemic has continued to prevent the organized prep activities as previously carried out, Dunn noted that the club takes pride in being able to offer a safe and healthy outlet for local youths.

“The pandemic has been terrible to try to get everything pulled together, but we’re trying to do everything we possibly can. Whether it’s getting them together and social distancing or playing games, or trying to promote teamwork as a group, it’s important for these kids to be together from the time they start to the time they finish,” Dunn said. “This is a group that’s like a family that we try to bring together whenever we possibly can.”

Dogtown Wrestling Club has proven to be one of the most successful athletic feeder programs in the county’s rich sports history, evidenced by the recent capturing of an NCHSAA state wrestling championship at both the state duals and individual levels, the first team state titles in the more than 50-year history of Avery High School. Among the roster of champion Vikings were DWC alumni that included state champions River Griffith and Ethan Shell.

“We come in here and develop athleticism and toughness, becoming not just better wrestlers but better athletes,” Dunn explained. “That’s huge for us, to develop athletes in all sports, and it begins with having kids’ programs. The sooner you can have an athlete in here learning little things like toughness, agility, and things like that, they all factor into a student’s overall athleticism.”

DWC spans a wide range of ages of participants. According to Dunn, “If you can tie your shoes, you’re old enough to join the club,” and the club ranges through high-school-age wrestlers. The club features an introductory program for those younger or newer to the sport where some of the ACHS wrestlers help with training and students are taught tumbling, footwork, ladder work and agility drills, while an intermediate to advanced level, referred to as “Savages,” allows more skilled wrestlers to work alongside high school wrestlers to hone their craft.

The club has boasted as many as 35 to 40 kids as part of the program, and the ultimate goal of Dogtown Wrestling Club revolves around the development of the overall athlete, both on the mat and as an individual.

“We want to develop better athletes and better people. We talk about hard work and discipline, about what it takes to be successful, not just in wrestling, but in life in general,” Dunn added. “We’ve had a tremendous amount of success with kids in this room. We’ve had high school All-Americans, middle school national champions and a lot of success for being located in a small town. To have such great athletes available to work with and teach these kids it is a tremendous opportunity, whether you want to be a wrestler or excel in another sport. What an awesome opportunity for an area like ours. It’s like a ‘diamond in the rough’ for kids in any sports to improve.”

Students wishing to participate in DWC can check the club out online by clicking to dogtownacya.com, calling (828) 387-7330, emailing dogtownacya@gmail.com or by visiting the Dogtown Wrestling Club Facebook page.