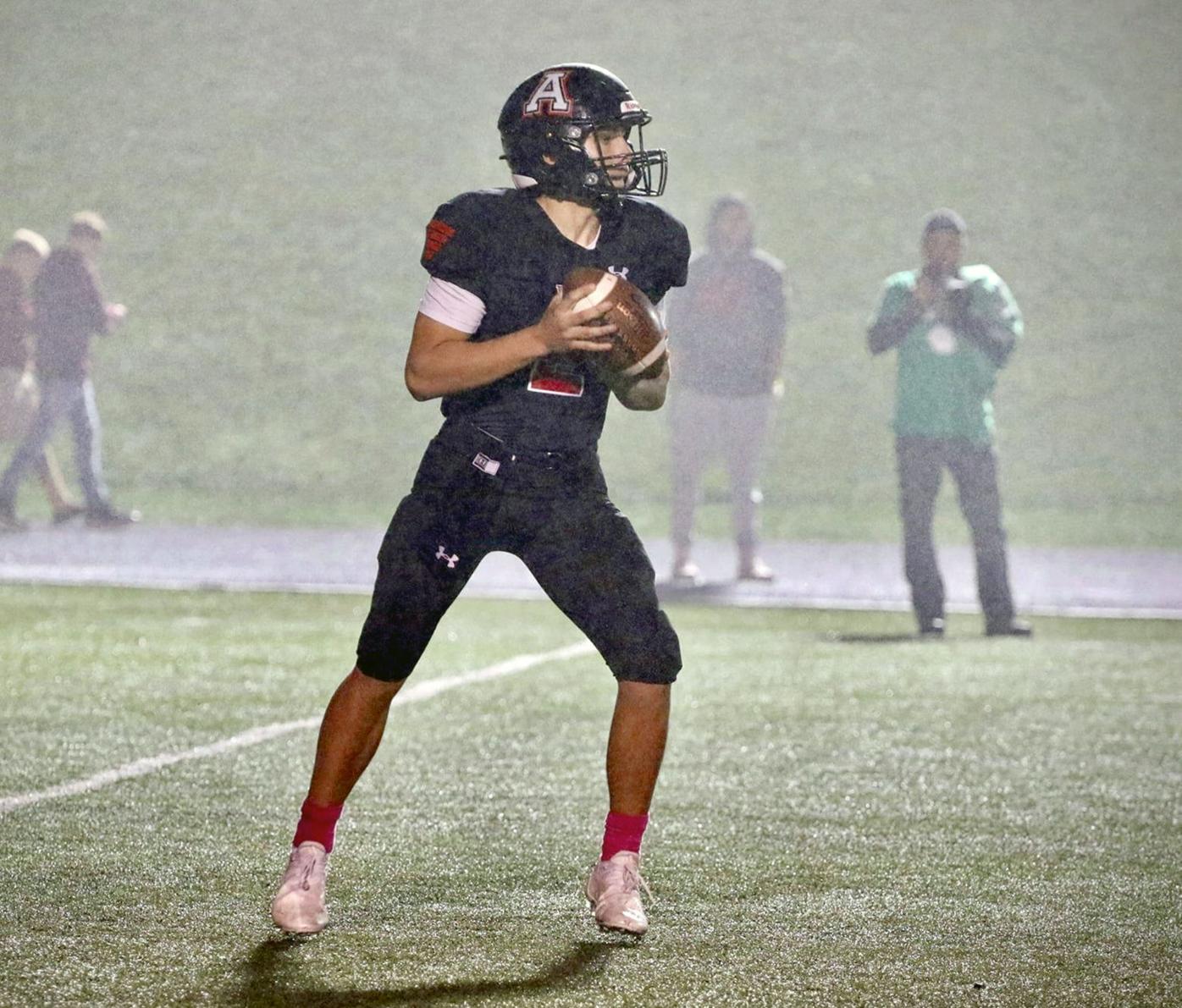 Avery quarterback Will Stanford drops back to throw during a steady rain at MacDonald Stadium in the Vikings’ conference matchup against Mountain Heritage on Friday, Oct. 8. 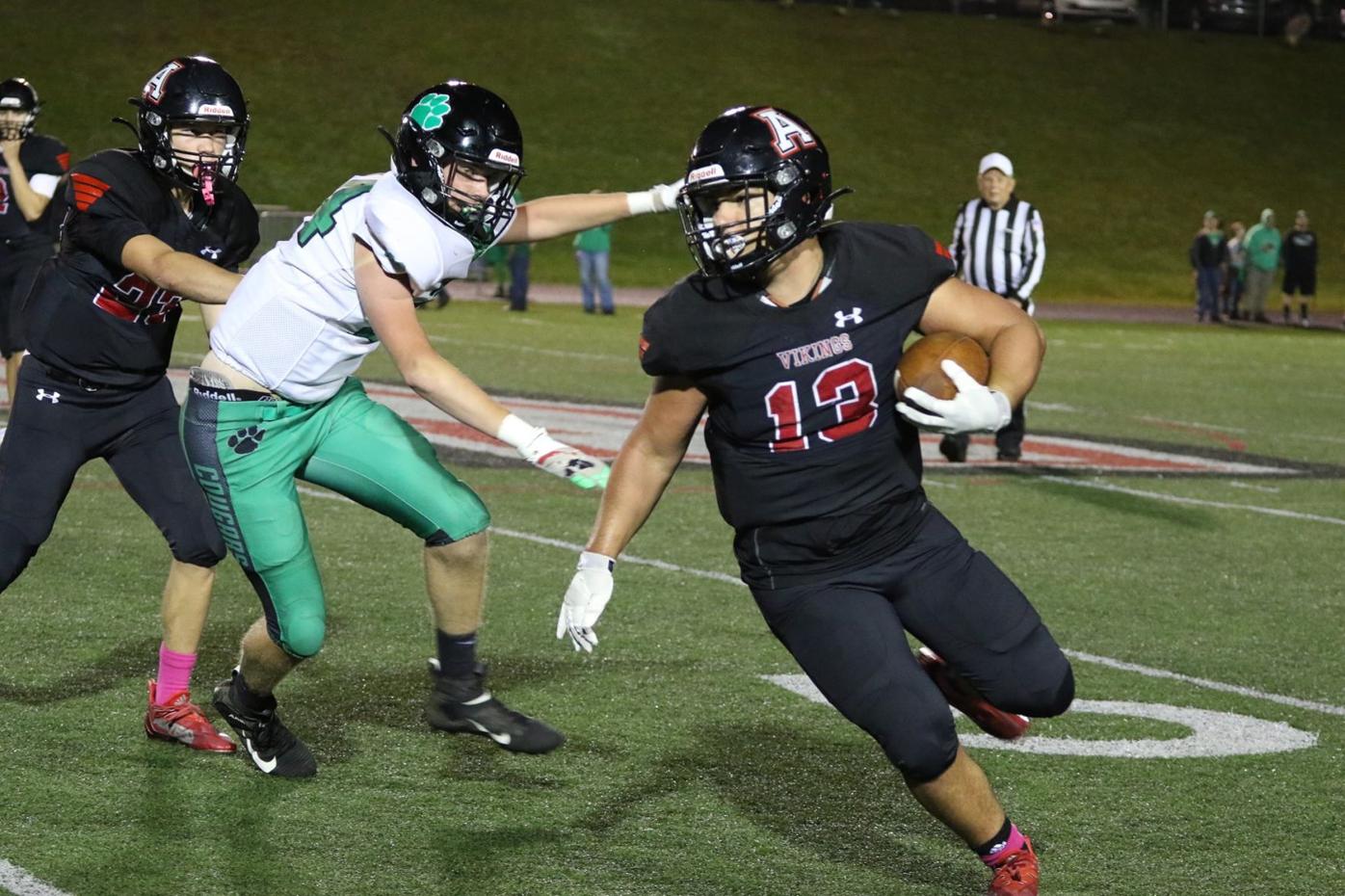 Chad Giarrusso finds the corner on a run against Mountain Heritage. Giarrusso had his fifth 100-yard rushing game of the season in the game against the Cougars. 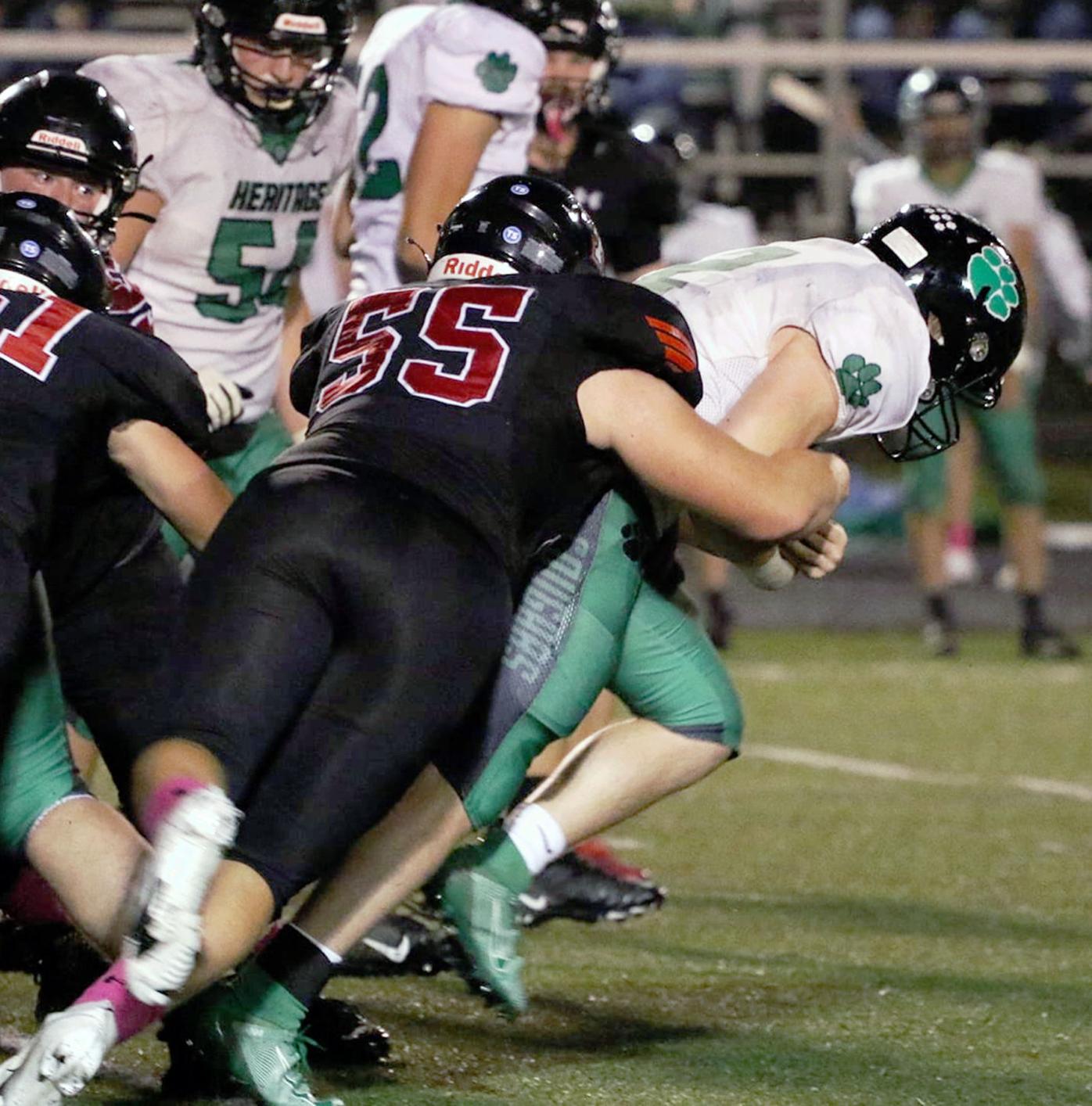 Levi Andrews wraps up Mountain Heritage quarterback Gabe Silvers on a running play. Andrews led all players in tackles in the Vikings’ matchup against the Cougars.

Avery quarterback Will Stanford drops back to throw during a steady rain at MacDonald Stadium in the Vikings’ conference matchup against Mountain Heritage on Friday, Oct. 8.

Chad Giarrusso finds the corner on a run against Mountain Heritage. Giarrusso had his fifth 100-yard rushing game of the season in the game against the Cougars.

Levi Andrews wraps up Mountain Heritage quarterback Gabe Silvers on a running play. Andrews led all players in tackles in the Vikings’ matchup against the Cougars.

NEWLAND — With its open week in the rearview mirror and two weeks of preparation, the Avery Vikings (1-6-1-2 WHC) varsity football team took the field at MacDonald Stadium on Friday night, Oct. 8, seeking to pick up its second conference win against last season’s 2A state runner-up, Mountain Heritage (4-1, 2-0 WHC).

On a damp and drizzly gridiron evening, Avery struggled to gain any offensive traction for much of the game, as Mountain Heritage scored 34 answered first-half points for a commanding halftime advantage. The Big Red offense found success, primarily in the final four minutes of the game, as Avery scored two late touchdowns to narrow the final score, as Mountain Heritage gained a 40-20 victory.

The bulk of the Vikings offense for the evening came through the running of junior Chad Giarrusso, who racked up his fifth 100-yard-plus rushing game of the season, collecting 177 yards on 25 carries with a pair of touchdowns. As a team, the Vikings amassed 282 yards in total offense, while MHHS gained 405 yards in total offense, including 329 rushing yards on 44 attempts.

“They’re a good football team (MHHS) with a tradition that is used to winning. I think they play better because of that. They did some good things. I thought we got ourselves out of position a few times defensively where we didn’t line up exactly as we should have, and they took advantage of that in a hurry,” Avery head coach Mac Bryan said after the game. “I think the big play hurt us more. You worry (with Mountain Heritage) about them just grinding the ball and taking time off the clock for four or five yards, and I think we held up physically against that pretty well. What got us was the big play where we’d be out of place or we got beat deep a couple times on some play action. I think that hurt us more than anything else. Also with all the penalties we had, that’s something that we haven’t done all season. I’m not sure where that came from, and it’s hard to beat a team when you have 13 penalties for 149 yards.”

A stout Mountain Heritage defense, combined with the Vikings’ inability to build offensive momentum, was key to the game’s outcome. Of the five Avery first-half possessions, three resulted in punts, with the remaining two resulting in unsuccessful fourth-down conversions. Meanwhile, the Cougars cashed in with touchdowns on all five of its first-half drives.

Starting the game with its first offensive series near midfield, Avery was unable to capitalize, as an intentional grounding play near the red zone eventually led to a Viking punt. The first Heritage possession covered 80 yards over eight plays, as a pair of 15-yard penalties assessed to Avery aided the drive which eventually resulted in a 3-yard touchdown run by MHHS quarterback Gabe Silvers. Silvers also converted a 2-point conversion run for an 8-0 Cougars advantage a little better than seven minutes into the contest.

Avery was forced to a three-and-out on its second possession, and the Cougars offense continued to run the football, mixing in the occasional pass play. An unsportsmanlike conduct penalty helped MHHS cross midfield, and Heritage struck pay dirt for a second score in the waning seconds of the first quarter as Silvers connected with Colby Capps on a 15-yard touchdown pass. Silvers’ 2-point conversion run gave the visitors a 16-0 lead after one quarter.

The Vikings offense returned to the field to open the second quarter seeking a spark and positive results. Giarrusso picked up gains of 14 and 10 yards, respectively, as AHS crossed midfield. Facing a 4th-and-9 at the Heritage 38-yard line, the Vikings kept the offense on the field to attempt to gain first-down yardage, but was unsuccessful as the Heritage defense bowed its neck to force a turnover on downs.

Riding the momentum of its defensive stop, the Cougars offense continued to find success, with Silvers breaking through the Avery front and outrunning the defense on a 44-yard touchdown run. The two-point conversion try failed, but MHHS held a 22-0 lead at the midway point of the second quarter.

Avery’s offense again was stonewalled by Heritage to force another three and out deep in Viking territory, and looking for anything to provide a spark, Avery attempted a fake punt on a 4th-and-13 play, as a Giarrusso carry came up a yard short of the line to gain for a first down, giving Heritage possession at the Avery 31. On the immediate next play, Cougars running back Jakob McCool rambled through tackles and to the goal line for a 31-yard score. Another two-point conversion for MHHS failed, but Mountain Heritage held a 28-0 lead.

“On that fake punt, I thought Chad had the first down. I can’t see all the way across the other sideline but it sure looked close to me,” Bryan explained about the conversion attempt. “He saw that they weren’t rushing and took advantage of the situation that was there. With the situation being what it was, I thought that it was a headsy play. They slow rushed it, or not at all, and they left one side of the field uncovered, so he took off. I thought he had made it.”

Another three-and-out from Avery resulted in a punt on the ensuing Viking possession, as the Cougars offense took over, striking for a chunk play when Silvers found receiver Colby Capps for a 56-yard gain. Three plays later, Silvers completed a 20-yard touchdown pass to Griffin Ray with 41 seconds left in a forgettable Vikings first half. The extra point kick failed, but the Vikings faced a 34-0 deficit at halftime.

Mountain Heritage was dominant on the stat sheet through two quarters, holding a usually potent Avery offense to just 82 total yards of offense for the half.

The Vikings began to see a turning of its fortunes as the second half unfolded. Avery’s defense forced a Cougars punt with Heritage’s opening possession of the third quarter, and the offense managed to get untracked. Giarrusso and quarterback Will Stanford began to find consistent running lanes to pick up yardage and first downs. A nine-play, 58-yard drive was capped with the first Vikings score of the night, as Stanford completed a 4-yard touchdown pass to wide receiver Elijah Holtsclaw to cut the Heritage lead to 34-7 midway through the stanza.

Sensing that Avery was beginning to seize momentum, the Cougars responded with its own touchdown, a six-play, 80-yard drive finalized by a Silvers 58-yard tote to the end zone. An extra point kick failed, leaving MHHS with a 40-7 lead by the end of the third quarter.

With the game’s outcome no longer in doubt, the Vikings nevertheless continued to play hard and find positives to build on to close the game. Avery’s defense kept the Cougars off the scoreboard for the remainder of the contest, while it scored two additional times to narrow the final margin.

A six-play, 80-yard drive by the Big Red featured a pair of Stanford pass completions, one to James Harris and one to Logan Gilliam, with four Giarrusso rushes peppered in, the latter of which a 23-yard run through tacklers for a touchdown. Avery recovered an onside kick following the score and used just five plays to traverse 50 yards, capped by a Giarrusso 29-yard touchdown run. A pair of penalties on the extra point attempt resulted in a longer PAT, which was not successful, accounting for the final 20-point margin.

The contest was a penalty-riddled affair, as the teams combined to commit 28 penalties for 247 yards. Avery converted only 2-of-11 third down conversions for the contest, while the Cougars were successful on five of its nine similar attempts.

Avery will look to get back on the winning track this Friday, Oct. 15, when the team travels to Marshall to take on conference foe Madison, who did not play a game this past week due to COVID issues within the Patriots football program. Kickoff is slated for 7:30 p.m. from Roberts Stadium.

“These kids deserve a win, and I think that we have a chance this week and next week to be very competitive. Early in the season, we weren’t quite where we needed to be due to our lack of experience early on, but ever since the McDowell game I believe we’ve competed pretty well,” Bryan explained. “We’ve just got to learn how to win. We were trying to close this game where we had a score, then got an onside kick and scored again. We’re trying, but we just dug ourselves into too much of a hole to get out of.”

After inauspicious Packers debut, Jaylon Smith ready to prove himself: ‘Every player has their doubters’