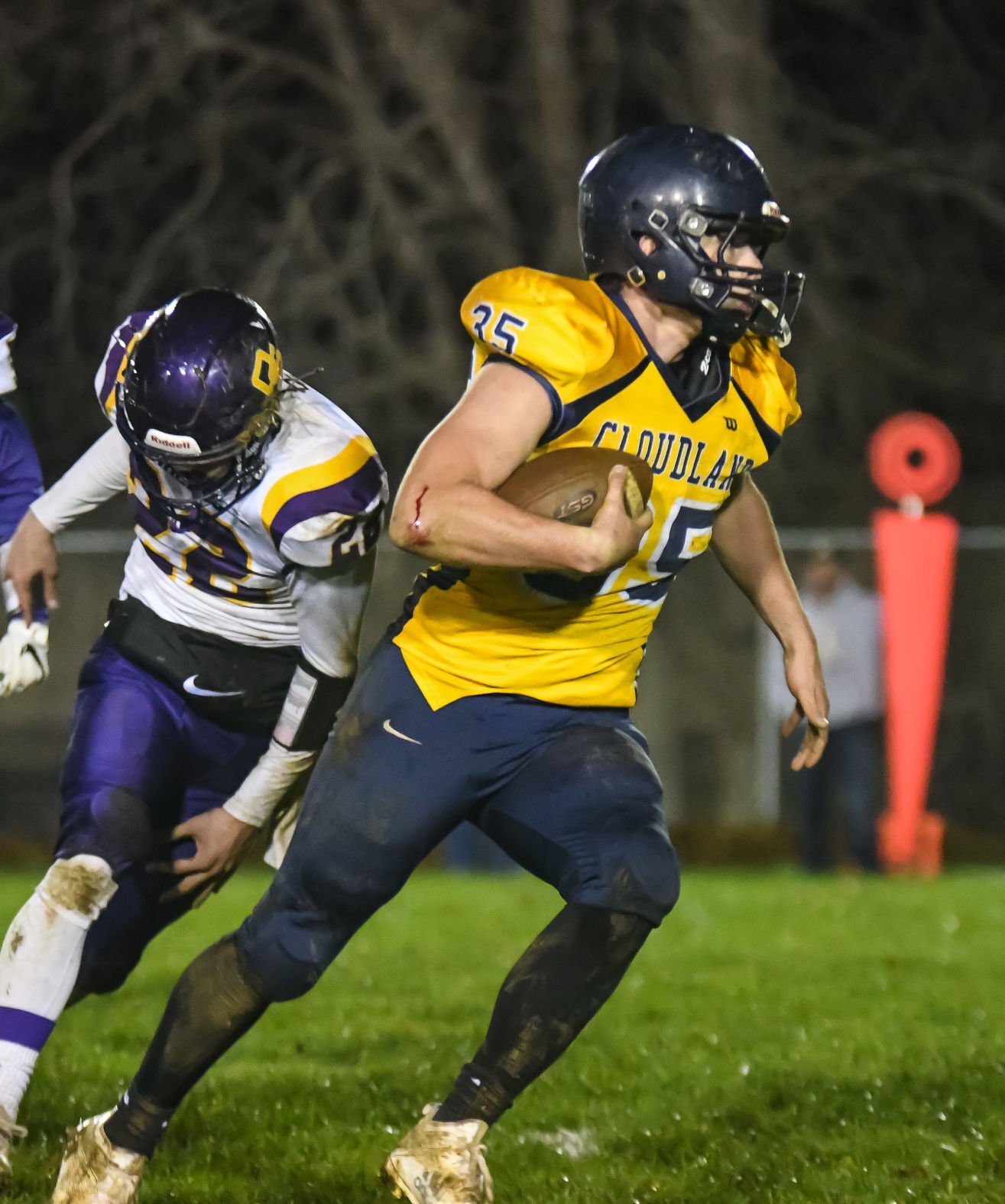 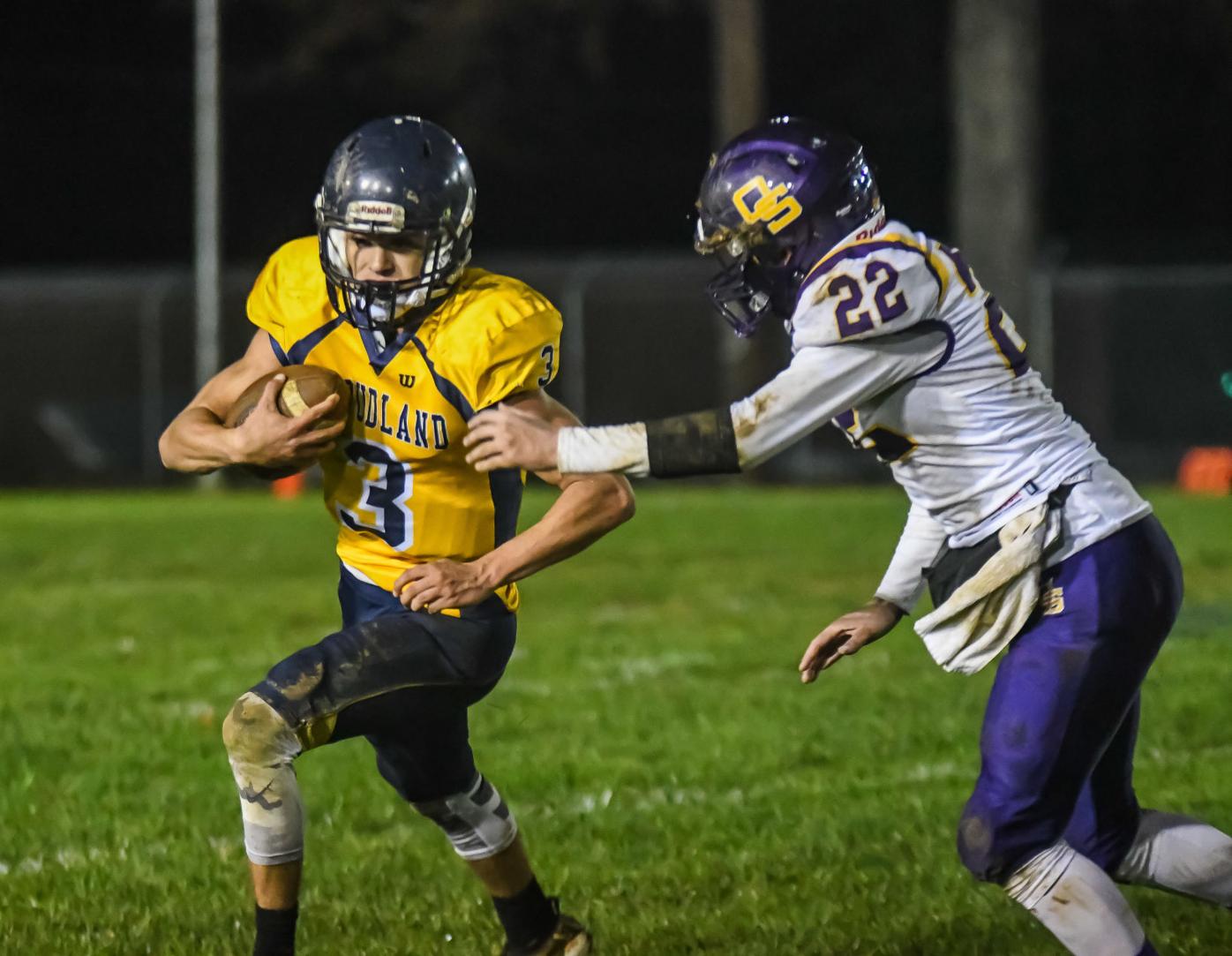 Cloudland quarterback Chase Shell carries a ball around the corner while avoiding a tackle against Oliver Springs last week at Orr Field.

Cloudland quarterback Chase Shell carries a ball around the corner while avoiding a tackle against Oliver Springs last week at Orr Field.

ROAN MOUNTAIN, Tenn. — Sometimes the breaks don’t fall your way, which was the case for the Cloudland football team on a misfortunate Friday the 13th against Oliver Springs, as the ‘Landers saw its 2020 campaign come to a heartbreaking close with a 24-20 loss to Oliver Springs in the second round of the Class A playoffs.

Cloudland found itself in a heavyweight fight, but never backed down. The CHS defense forced a quick three-and-out to open the game, but the ensuing punt hit a defender and Oliver Springs recovered. That set the Bobcats up in prime scoring position, as Kane Gouge caught a 10-yard pass from Zack Elliott for the game’s first score midway through the opening quarter. The CHS defense stopped the two-point conversion to leave OS with a 6-0 lead.

The ‘Landers offense was unable to get anything on its first drive of the game, but was able to flip field position as the punt pinned OS inside its own 5-yard line. The CHS defense limited the Bobcats to a three-and-out and set the CHS offense up at midfield.

Cloudland went to work on a nine-play drive that was capped off when Chase Shell hit Caleb Sluder over the middle of the field on a 19-yard touchdown pass. The ‘Landers could not convert the two-point conversion, leaving the score tied at 6-6 with 6:51 to play.

After Cloudland’s Seth Birchfield recovered in Oliver Springs fumble, the ‘Landers offense went back to work with a seven-play drive that covered 56 yards. The drive ended as Shell scored on a quarterback keeper, and Cloudland pushed its advantage to 14-6 with just under three minutes left in the half.

Oliver Springs, however, battled back with a lengthy drive of its own that was aided with two pass interference penalties, as Jacob Hileman scored on a pass from Elliott to tie the game up at 14 points apiece at the half.

Early in the third quarter, Oliver Springs took advantage of a Cloudland fumble on its opening drive, and Brandon Nation broke free for a 40-yard touchdown, then was able to convert the two-point conversion on a pass from Elliott to Cameron Stockton.

The ‘Landers got back on its feet on offense and moved the ball efficiently on its next drive. Birchfield got back on the board as he broke free for a 40-yard touchdown run to trim the Oliver Springs lead. CHS was unable to tack on the two-point conversion, however, as the Bobcats held a slim 22-20 lead after three quarters of play.

During the final stanza, Cloudland’s defense limited the Bobcats, while the ‘Landers sought to seize momentum and the lead.

The CHS defense — sparked by a pair of key plays from Eli Preswood — forced a quick three-and-out early in the period. The offense moved the ball to midfield, but did not get a break on a pass interference call on fourth down that was instead ruled a late hit, allowing Oliver Springs to take over possession on downs.

Cloudland forced a pair of Oliver Springs punts throughout the quarter, but the offense was unable to mount a rally to extend its season. The Landers held Oliver Springs to -7 yards during the final 12 minutes of the game.

Birchfield finished with a strong showing of 118 yards on 19 carries, while Sluder had eight carries for 51 yards and also added 19 receiving yards. Shell had six carries for 20 yards, while adding 42 yards through the air.

Nation led Oliver Springs with 86 yards on 15 carries, while Elliott was 4-of-8 passing for 36 yards.

Cloudland ends its season with a 7-5 overall record and regular-season champions of Region 1-A.

Scouting Iowa: Breaking down the Hawkeyes