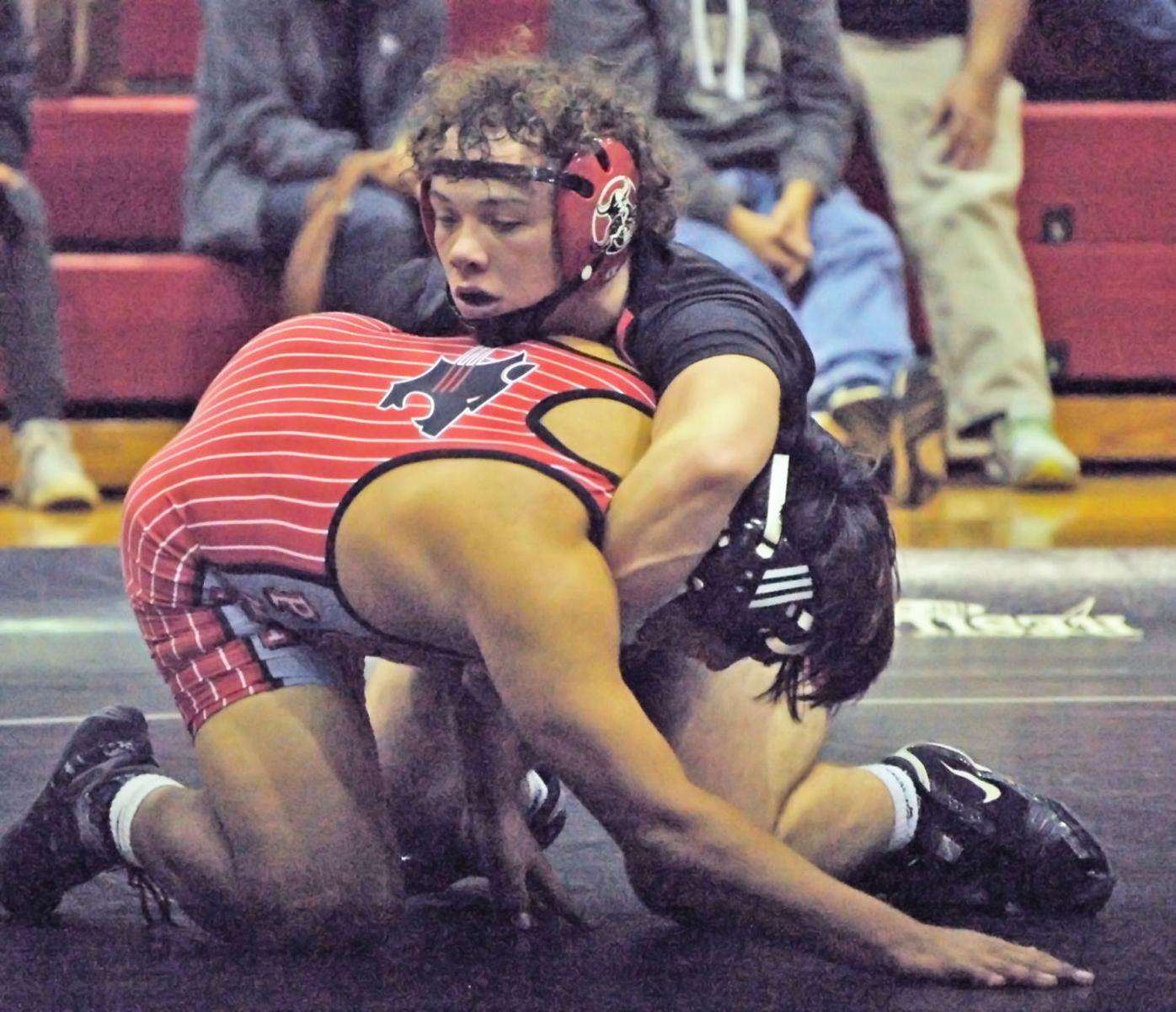 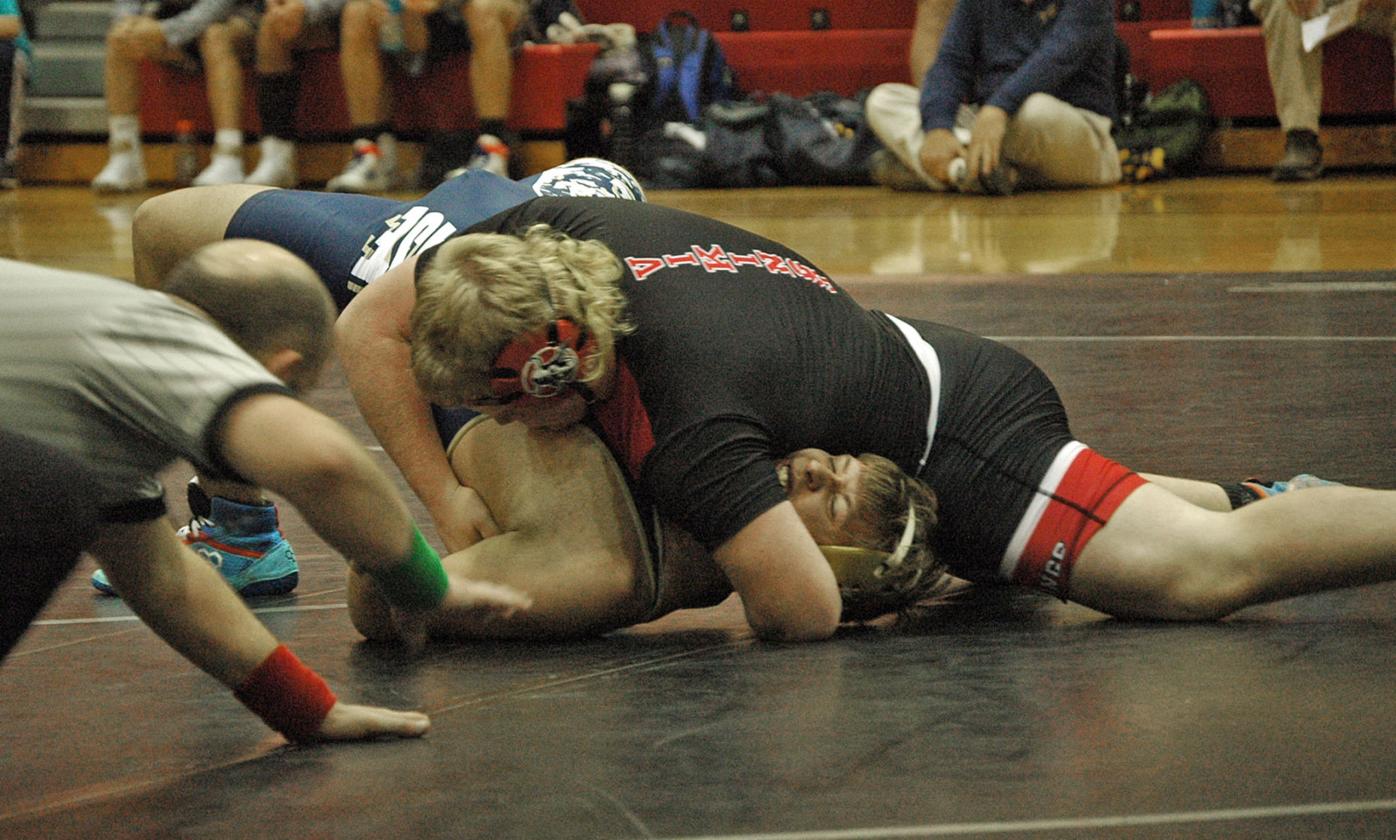 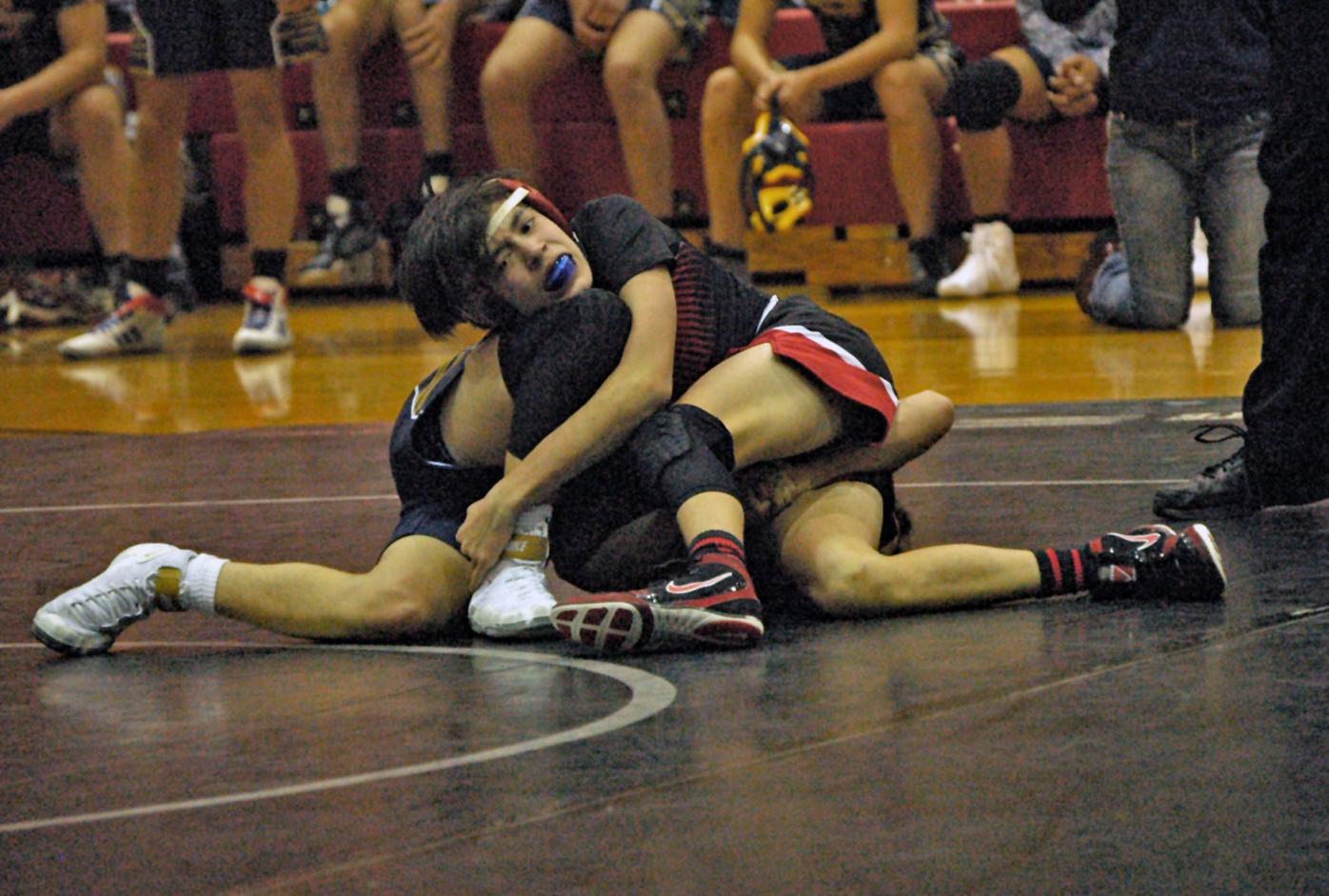 Avery's Cooper Foster gets an upper hand on his opponent en route to a pinfall at Patton High School last week. Foster won all three of his bouts on the evening, as well as won his bracket at 106 pounds at the Dekota Smith Invitational in Sawmills the following weekend.

Avery's Cooper Foster gets an upper hand on his opponent en route to a pinfall at Patton High School last week. Foster won all three of his bouts on the evening, as well as won his bracket at 106 pounds at the Dekota Smith Invitational in Sawmills the following weekend.

With a pair of championship seasons in its rearview mirror, the Avery Vikings wrestling team returned to the mat to open the 2021-22 regular season with a pair of dominating performances on the mat, venturing to Patton High School to wrestle a trio of schools on Tuesday, Nov. 16, before travelling to South Caldwell High School on Saturday, Nov. 20, for the Dekota Smith Invitational.

MORGANTON — Avery got its first taste of regular-season mat action when it participated in a five-school meet at Patton High School, featuring the host Panthers, South Iredell, Chase and Hibriten high schools. Each school was allowed to participate in dual matches against three other schools, and the Big Red squared off against South Iredell, Chase and Patton, coming away with convincing wins over all three opponents.

The Vikings battled in what was its closest team bout of the evening in its first matchup with the fellow Vikings from South Iredell. Sophomore Grant Reece began the dual for the Vikings at 138 pounds with a victory by first-period pinfall over South’s Landon Kaiser. Senior Ethan Shell followed with a pinfall win in only 57 seconds at 145 pounds over Shephard Kappel of SIHS. The next three bouts were each won by pinfall by the Avery trio of Johnathan Cable (152), Tristan Adams (160) and Bradley Parker (170), respectively.

Following a forfeit win by Avery’s Seth Blackledge at 182 pounds, South Iredell got on the board with a win at 195 pounds by Mike Rank over Avery’s Dakota Hoilman. Avery responded with three straight pinfall victories in its next three bouts by Zach Vance (220), Levi Andrews (285) and Cooper Foster (106).

Francisco Turja earned a forfeit win at 113 pounds, with another win by forfeit earned by teammate Ben Jordan at 120 pounds. South Iredell earned the final two bout wins for the match to provide the final margin, as Brock Cotton won for South over Kaden Knight of Avery at 126 pounds, and Aidan Moose scored a 5-2 decision win against Avery’s Mason Bentley at 132 pounds.

Avery’s second dual of the evening against Chase High School was a clinic in technical efficiency and control, as the Big Red shut out the Trojans on the scoreboard.

Late in the evening, Avery’s final opponent of the night was the host Panthers. Avery surrendered a pair of forfeits at 126 and 132 pounds, respectively, while the Vikings received forfeit wins by Turja (113), Shell (145) and Cable (152).

In contended bouts, Adams earned a 6-4 sudden victory win over Patton’s Dilan Patton, but a team point was deducted by the official immediately following the match for unsportsmanlike conduct. Parker earned a 13-4 major decision victory at the 170-pound class, with teammate Blackledge winning by fall in 1:08 at 182 pounds.

Lane Hoilman won by first-period fall at 195 pounds, while Vance won by fall with two seconds left in the opening period. Grayson Hoilman picked up a win at 285 pounds against opponent Nicholas Parlier, while teammate Foster was a pinfall winner at 106 pounds in only 38 seconds. Jordan won by fall in 31 seconds at 120 pounds, with Bentley earning a second-period pinfall win at 138 pounds over Patton’s Zachary Coffey.

“I feel pretty comfortable with where we are at this point of the season. We had as good of an offseason as we could with the limitations that we’ve had. This is an older team; there isn’t a need to start off with full momentum with an old team, so strategically we’re kind of slow rolling, building to where we need to be and taking care of our bodies and diets to get to the weights where we need to be,” Avery Wrestling Head Coach Matthew Dunn said of his club following the event. “We’re not talking so much about learning moves anymore with our veteran wrestlers as we are about developing strategies, so it’s really an advanced room and we’re treating our guys in an adult-like way. At the end of the year, we know who we will be facing and we know how good they are.”

The Patton duals afforded the coaching staff with an opportunity to give his entire team time on the mat in live competition against an opponent besides a teammate in the wrestling room at practice.

“I was super impressed. Whether they won or lost, I see that they’re understanding what we believe in here in Avery Wrestling. They were always attacking and always going after points,” Dunn explained. “They didn’t go out there worried about losing, but were going out there trying moves that they’re learning, and that’s where you become successful. Every member of our team got to wrestle. We wrestled 30 to 40-percent JV wrestlers in all of our matches and just rotated them around so everyone was getting experience, so I think that’s great. Some of the kids, because they were blended in with our veterans, they experienced what momentum is about, and they didn’t care that they were inexperienced, and they were winning matches that ordinarily they may not have because they were feeding off of what had already happened, and that’s a real confidence booster.”

SAWMILLS — With a solid opening performance earlier in the week, Avery rode with confidence into South Caldwell High School to participate in the Dekota Smith Invitational. Several of the other projected top 1A schools in North Carolina joined the Big Red at the event, including perennial power Robbinsville and legitimate state contender Mount Airy.

When the event was complete on Saturday, Nov. 20, several Vikings took to the top of the podium as weight class tournament champions, with Avery also earning the overall top team score at the event.

Cooper Foster turned in another tremendous performance, winning the bracket in the 106 pound weight class. Following a double bye, Foster won by pin over Frankie Durmire of Alexander Central in the semifinals, followed by a pinfall victory in 2:08 over Peyton Sutton of North Lincoln.

At 120 pounds, Ben Jordan had an opening round bye, but captured three straight wins to capture the bracket. Jordan defeated Kaden Helms of North Lincoln by first-period fall, followed by a first-period pin over Mooresville’s Collin Nieth in the semis. In the first-place bout, Jordan earned an 8-2 decision victory against West Henderson’s Damon Landreth for top honors.

At 126 pounds, Mason Bentley dropped his opening bout against McDowell’s Luke Roberts, but rallied following a bye in the consolation bracket to earn two straight wins, defeating Logan Lail of Alexander Central by first-period pin, and defeating Zach Ward of East Burke by second-period fall. Bentley’s final match was a defeat in the consolation semis to Jonah McBurney of host South Caldwell.

In the 132-pound bracket, Grant Reece opened the tournament with a bye, then won by 8-4 decision over Alexander Central’s Christian MacGalliard. In the championship semis, Reece defeated John Alex Cox of Mount Airy, finishing the tournament with a 9-6 decision victory over Hibriten’s Josiah Honer for the top spot.

At 138 pounds, Ethan Shell opened as the top seed with a double bye to the semifinals. In the semis, Shell pinned opponent Evan Stanley in only seven seconds to reach the finals, where he pinned Robbinsville’s Zane Lucksavage in just 12 seconds to win the bracket.

Johnathan Cable represented Avery in the 152-pound bracket, winning his opening two bouts over North Iredell’s Jimmy Torres by first period fall and over Joe Dishman of Statesville by a narrow 5-4 decision. In the championship semis, Cable fell by 6-2 decision to Davis Freeze from Mooresville, but bounced back to win the third-place match over Dishman by a 9-5 decision.

Tristan Adams wrestled for Avery at 160 pounds, earning a first-round bye before getting to work. Adams earned a first-period pinfall win over Garrison Head of West Iredell, then defeated Elijah Peal of Alexander Central by first-period pin to face top seed Connor Medvar of Mount Airy in the championship match, where Medvar came out on top by a 6-2 decision.

Seth Blackledge wrestled for Avery in the 182-pound bracket. Blackledge earned a first-round bye and proceeded to win his next two bouts, a pinfall win over North Iredell’s Jonte Bailey and a 9-2 decision against Joseph Plyler of North Lincoln. Blackledge faced defending state champion Kyle Fink in the championship match, where Fink earned a win by second-period fall for Blackledge to earn runner-up honors.

Dakota Hoilman battled back from adversity in the 195-pound bracket, dropping his first bout by a narrow 8-7 decision versus West Henderson’s Nathaniel Fogel. Hoilman earned a first-round consolation bye, then defeated both Kasen Booker of West Caldwell and William Suddreth of South Caldwell by pinfall. In the consolation semis, Hoilman was eliminated by eventual third-place winner Nathanial Dahlstrom of Alexander Central.

Levi Andrews made quick work of opponents in the 285-pound bracket. defeating North Iredell’s Dakota Farmer in by pin 27 seconds, followed by a pinfall in 1:18 over David Rhinehardt of West Caldwell, only to wrap up the championship with a pinfall in six seconds over Mooresville’s Ray Watson.

Avery won the team competition with 207 points, with Mooresville placing second (171 points) and Robbinsville third (128 points). The Vikings are ranked second behind Robbinsville in the latest 1A team poll, as the Knights, along with Mount Airy, Rosewood and Uwharrie Charter will be slugging it out for this year’s state team and individual titles.

“The past two years, we’ve come out with an expectation that if we can hold it together and build up, we can win this team championship. This year, it’s like we’re the ones who may be chasing other teams that may be better than us this year,” Dunn added. “Talent is important, but it’s not as important as fight, so I’d say by the end of this season we will be in the best shape and best position that we’ve ever been, due to facing the best in the state that we’ve had to wrestle in a state final or semifinal.”

Avery returns to the mat this week with a quad match at Ashe on Nov. 23 against Ashe, North Wilkes and Watauga, with its next outing on December 2 in a tri-match at McDowell.