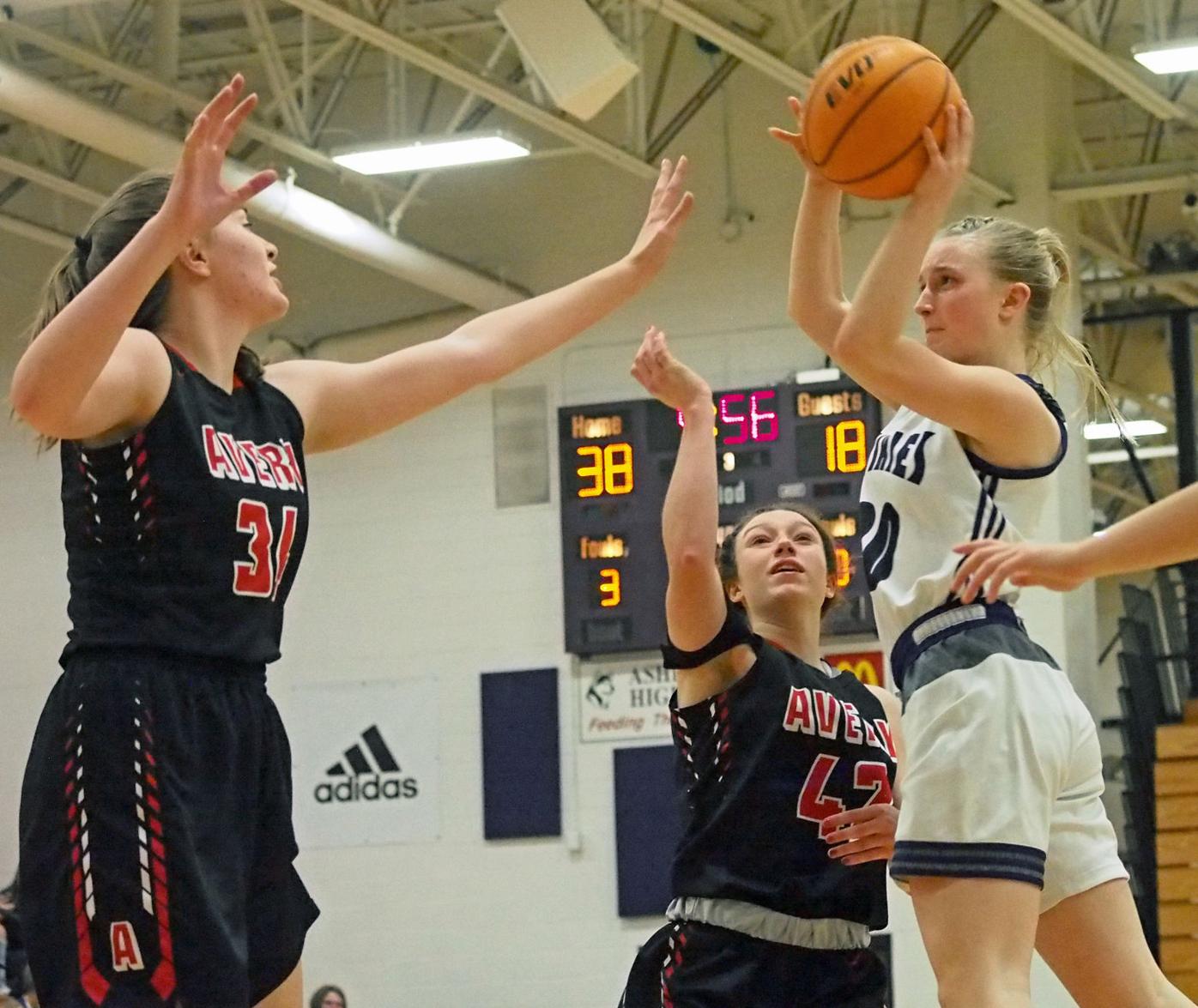 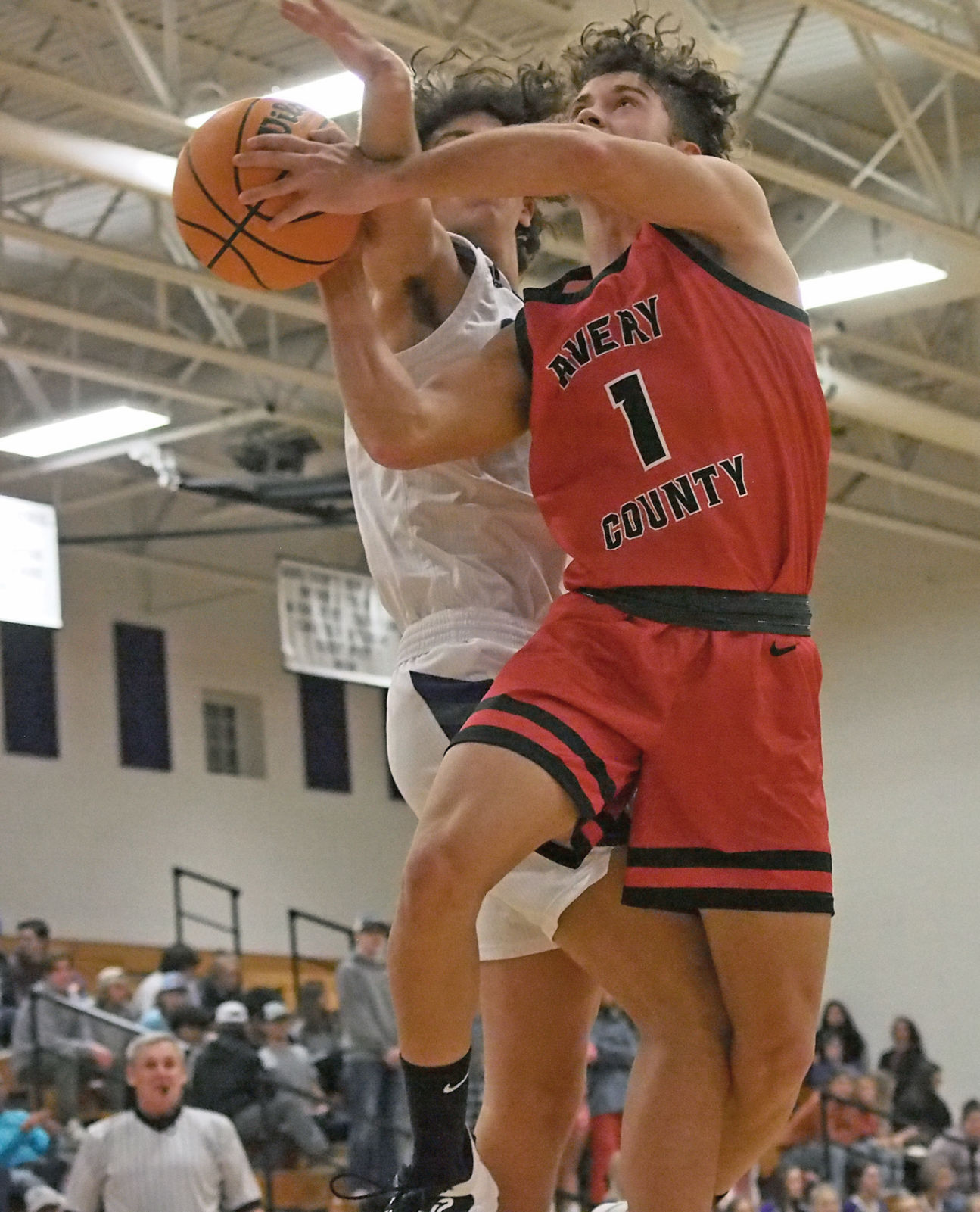 Avery’s Elijah Holtsclaw is hammered by an Ashe County defender on a shot attempt in boys varsity basketball action on Tuesday, Dec. 21, in West Jefferson. 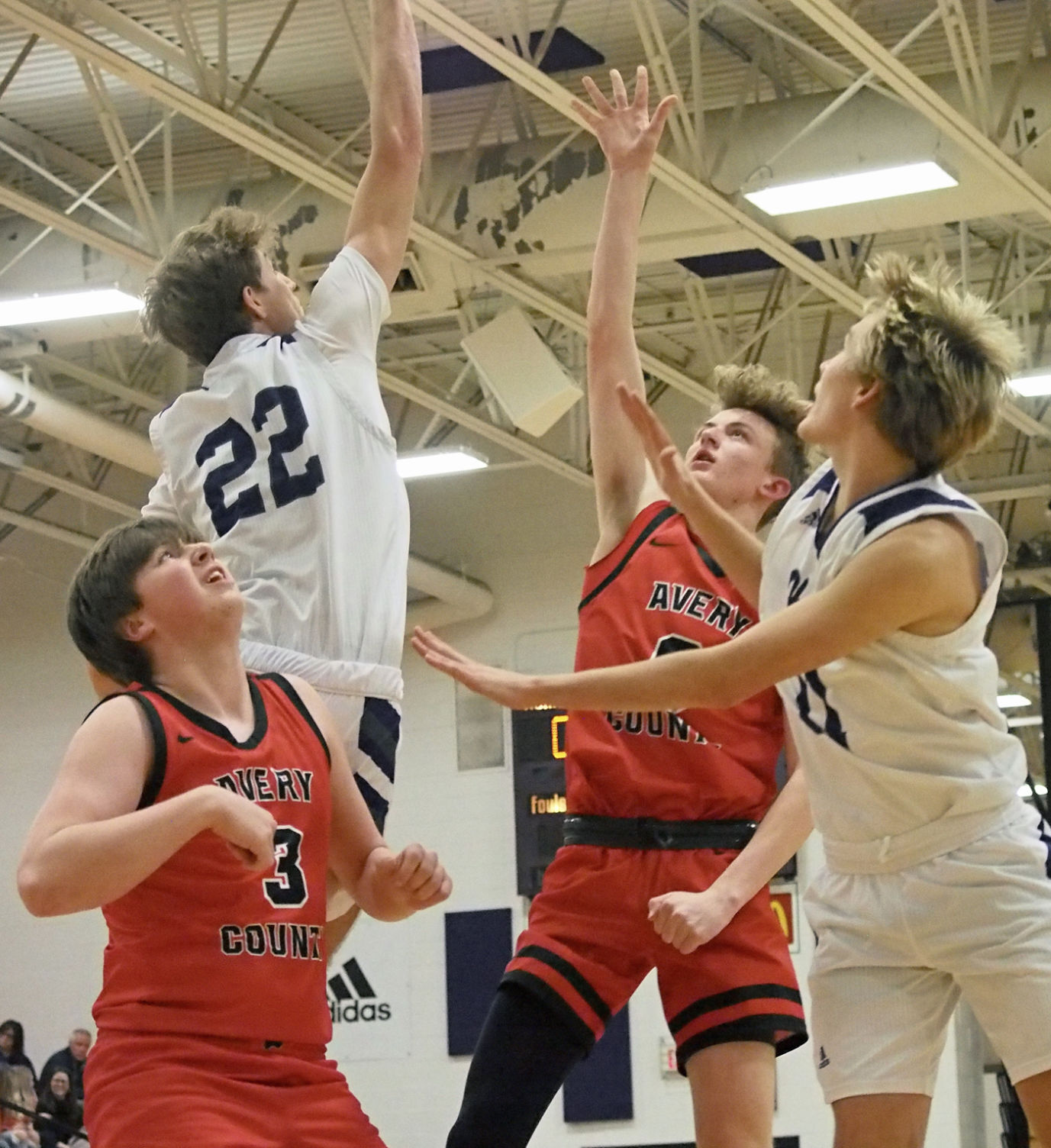 Avery’s Landon Ingham lofts a shot over the extended arm of an Ashe County defender as teammate Mason Bailey positions for a rebound in a Dec. 21 contest in West Jefferson.

Avery’s Elijah Holtsclaw is hammered by an Ashe County defender on a shot attempt in boys varsity basketball action on Tuesday, Dec. 21, in West Jefferson.

Avery’s Landon Ingham lofts a shot over the extended arm of an Ashe County defender as teammate Mason Bailey positions for a rebound in a Dec. 21 contest in West Jefferson.

WEST JEFFERSON — With their final games prior to the Christmas holiday, the Avery Vikings basketball teams enjoyed an abbreviated week of action, traveling to Ashe County High School to square off against the Huskies on Tuesday, Dec. 21.

The teams split varsity contests on Dec. 3 at Viking Gym, highlighted by a buzzer-beater in varsity boys action that evening from Mason Bailey that gave Avery a come-from-behind 47-45 win.

In the rematches in Jefferson, however, it was Ashe County who pulled off a convincing sweep in varsity action, as the Huskies were victorious by double figures in each matchup.

Ashe 73, Avery 28 (girls)The Avery varsity girls were unable to get out of the starting blocks against the taller Ashe County Lady Huskies. Ashe came out strong in the opening quarter, managing to break the Avery defensive press and quickly building a double-digit lead.

Avery was bolstered by four points from Zoie McClarrin in the first quarter and nine of the 13 Lady Viking points for the first half, with a basket each from Khloe Burleson and Cora Lee Hollifield.

Ashe was stout on the offensive rebounding front in the first quarter, while Avery faced an uphill climb defensively when its tallest player to match up with the height of Ashe, senior Addie Beck, picked up a pair of personal fouls in the opening stanza. Ashe took advantage to build a 20-8 lead after eight minutes of play.

In the second quarter, the Lady Huskies offered little breathing room for the Avery offense, continuing to use its quickness to intercept passes while using its size inside and hot shooting from the perimeter to stretch its advantage.

Avery struggled to put the ball into the basket, as the Lady Vikings were held to a single free throw over a span of more than seven minutes in the eight-minute period. Ashe took charge of the matchup, helping the Lady Huskies to extend its lead over the Big Red to 38-13 deficit at the halftime break.

Ashe continued to expand its lead and used its defense to generate offense, as it built a 30-point lead midway through the third quarter and led 56-23 after three quarters, eventually enacting the NCHSAA 40-point-lead mercy rule in earning the victory.

Ashe was paced by Paige Overcash, who almost matched the entire team output for the Big Red, as Overcash poured in a game-high 22 points on 10-of-16 shooting, adding eight rebounds and three steals. Teammate Jayden Jones added a double-double with 12 points and 12 rebounds. Macie Miller and Jordan Jones each scored nine for the Lady Huskies.

Ashe 62, Avery 48 (boys)In the varsity boys contest, Avery sought to sweep the Huskies after having edged Ashe by a pair earlier in the month on Tommy Burleson Court in Newland.

The teams played a seesaw affair for much of the first quarter as both teams held a lead. Elijah Holtsclaw bolstered the Big Red with five points in the opening stanza, but a 7-1 scoring spurt by Ashe over the final three minutes of the period staked the home team a 12-7 lead after one quarter of play.

Ashe opened the second quarter with a 9-0 scoring run, fueled by three-pointers from Jake Grubb and Sawyer Eller that helped extend the Huskies lead to double-digits at 21-7 two minutes into the frame. Avery responded, however, by amping up its defensive intensity to force several Ashe turnovers and get out into offensive transition. The Vikings limited the Huskies to just two points over the final three minutes of the first half, while Avery’s Mason Bailey scored four of his six first-half points in the quarter, with two buckets from Marcus Milliron and a field goal from Landon Ingham helping the Vikings to pull to within single digits at 25-17 at halftime.

The Huskies extended its advantage in the third quarter behind a pair of Grubb three-pointers, while the Vikings failed to help its own cause with seven turnovers for the period and 21 in total for the contest.

Landon Ingham scored six points in the period, while Milliron chipped in with three to account for all of Avery’s scoring in the third period. Grubb, meanwhile, heated up for the Huskies with his white-hot shooting from beyond the three-point arc as Ashe built a 43-26 advantage entering the fourth quarter.

Over the final eight minutes, the Vikings refused to fold. Avery’s defensive press began to turn Ashe over, and after trailing by as many as 20 points at 54-34 with four minutes to play, the Big Red drew to within 13 at 56-43 following a Milliron bucket with 2:05 left in the game.

Ashe managed to regain its composure, however, as Austin Grogan scored four field goals in the final quarter as part of a 12-point performance, holding off the Big Red to secure the non-conference win.

Ingham led Avery with 14 points, with 13 points from Milliron and 10 from Bailey. Ashe’s Grubb led all scorers with 23 points.

The Vikings traveled this week to Cherokee to take part in the Holidays on the Hardwood Tournament at Cherokee High School before returning to conference play at home on Jan. 4 against Mountain Heritage.

The Sean Payton era, by the numbers: 10 stats to encapsulate his 15 seasons with the Saints