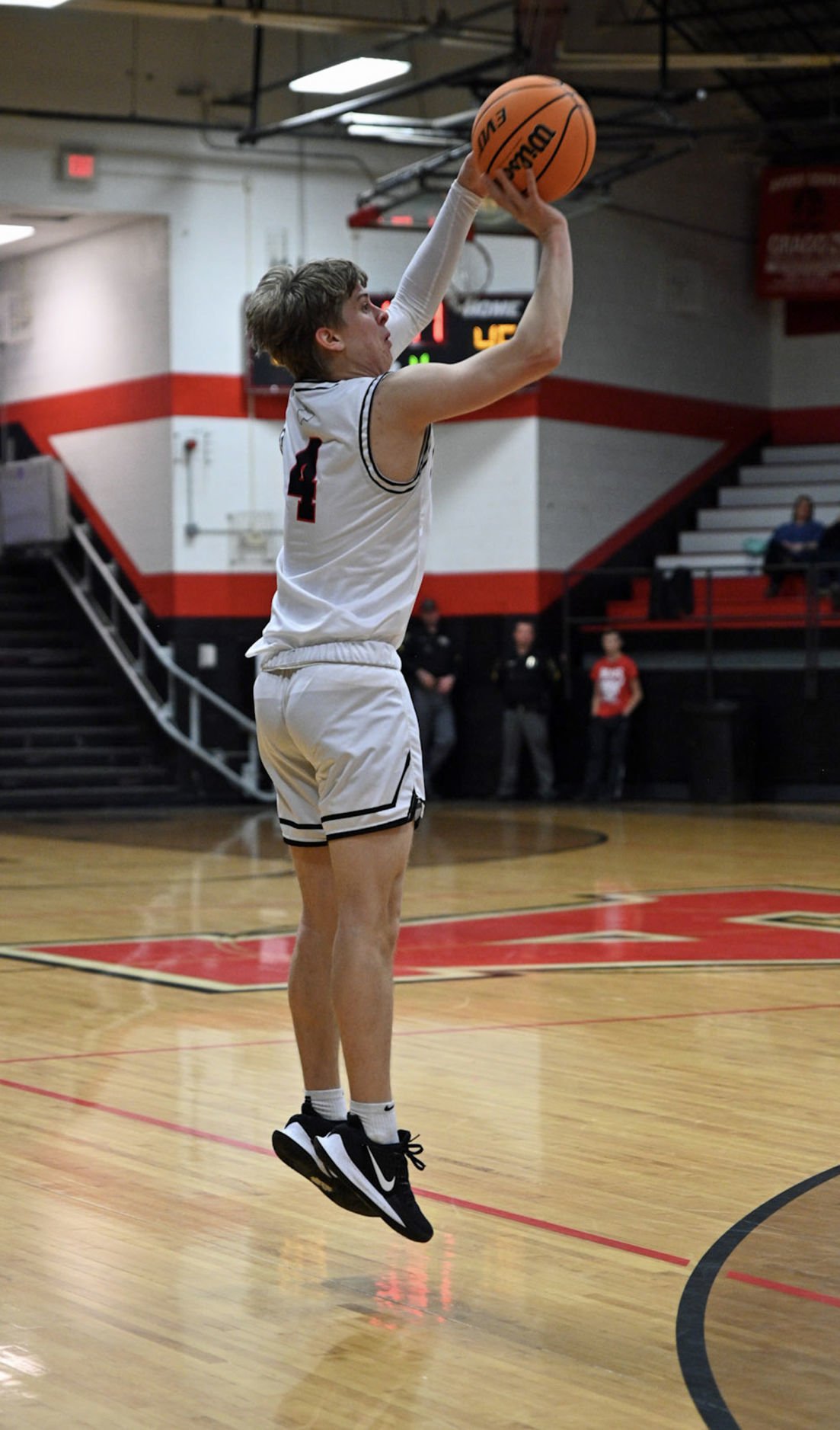 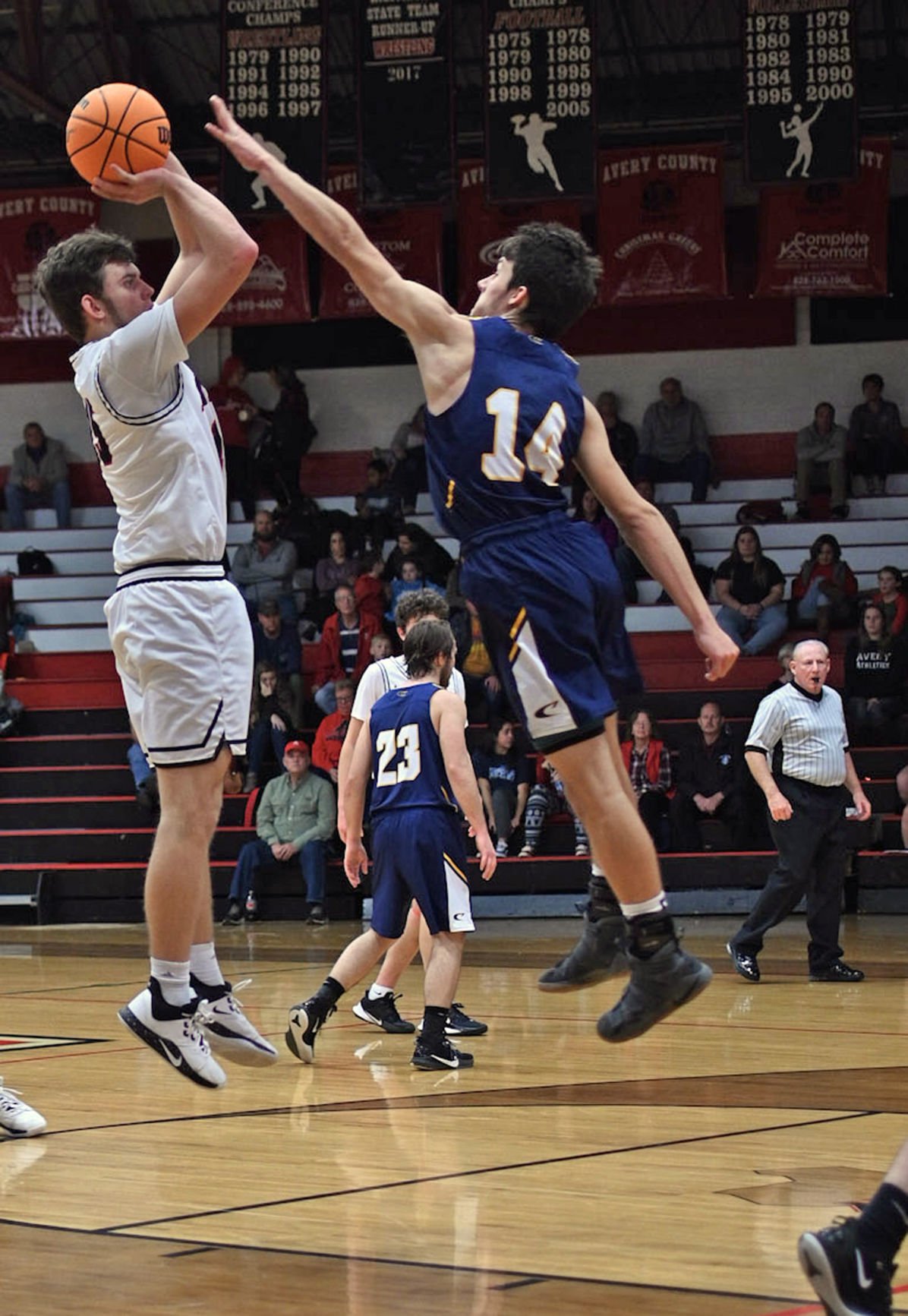 MARSHALL — Thanks to weather forcing a postponement last week, the Avery Vikings varsity boys basketball team only managed to play one game in the past week, a Western Highlands Conference matchup against the Madison Patriots.

In the first matchup between the schools, Madison senior Alex Chambers scored his 1,000th point as well as set a school record for points in a game with 44 points. In the rematch, however, the Avery defense held Chambers in check, limiting him to just 10 points.

Avery took a lead into halftime following a strong offensive effort through two quarters. Madison rallied, however, to outscore the Big Red 39-22 over the course of the second half to earn a 67-55 win.

“We played well and were up five at the half, but a slow third quarter hurt us,” Avery head coach Cody Frady said after the game. “Madison is the second-place team in the conference who has only lost to Mountain Heritage. I was proud of our defensive focus.”

The teams played a nip-and-tuck first period, as Madison gained an early 18-13 lead after one period. Avery was buoyed by the shooting of Trent Whitelock and Jonas Bowman. The pair combined to score all 13 Viking points in the frame to keep the game close in the early going.

As the second quarter unfolded, the Avery offense found a rhythm. Silas Barinowski sank a pair of three-pointers in the frame, while Whitelock scored four baskets, including a pair of three-point shots, as part of a 15-point first-half effort. Avery erased the Madison margin and scored 20 points in the period.

Defensively, Avery limited the home-standing Patriots to just 10 points for the eight-minute quarter, as the Vikings took a 33-28 lead into the locker room at halftime.

When the teams returned for the third quarter of play, the Vikings offense cooled due to a combination of stingy Madison defense and misfiring on it shots. MHS outscored Avery 22-9 for the stanza to regain a lead at 50-42 entering the fourth quarter.

Over the course of the final eight minutes, the Big Red looked to cut into the Patriots margin with five points from Whitelock and a pair of Bowman field goals, but Madison continued to answer every Avery surge. Jacob Lamb scored 14 of his team-high 18 points in the second half to lead the Patriots, while Ayden Stills scored 13 points, eight in the second half, to keep the Vikings at bay to seal the 12-point win.

Whitelock’s 22 points was complemented by Bowman’s 15-point performance. Barinowski added nine points, but no other Avery player scored more than two points in the game.

Lamb added six rebounds to his 18-point effort, with four points and a team-high 11 rebounds with four steals by Madison’s Elisha Barnette.

Avery’s Jan. 31 game against Polk was postponed due to weather and moved to Feb. 11. Avery’s next contest on the schedule against Owen has also moved dates, shifted to this Wednesday, Feb. 5, in Viking Gym. The Vikings are also scheduled to host Mitchell on Friday, Feb. 7.

Steven M. Sipple: How will Moos be judged as Husker AD? The pandemic will have large say

For Mike Pettine, defensive meltdown vs. 49ers was ‘beyond disappointing’ but can’t be ‘dark cloud’ that hangs over Packers in 2020