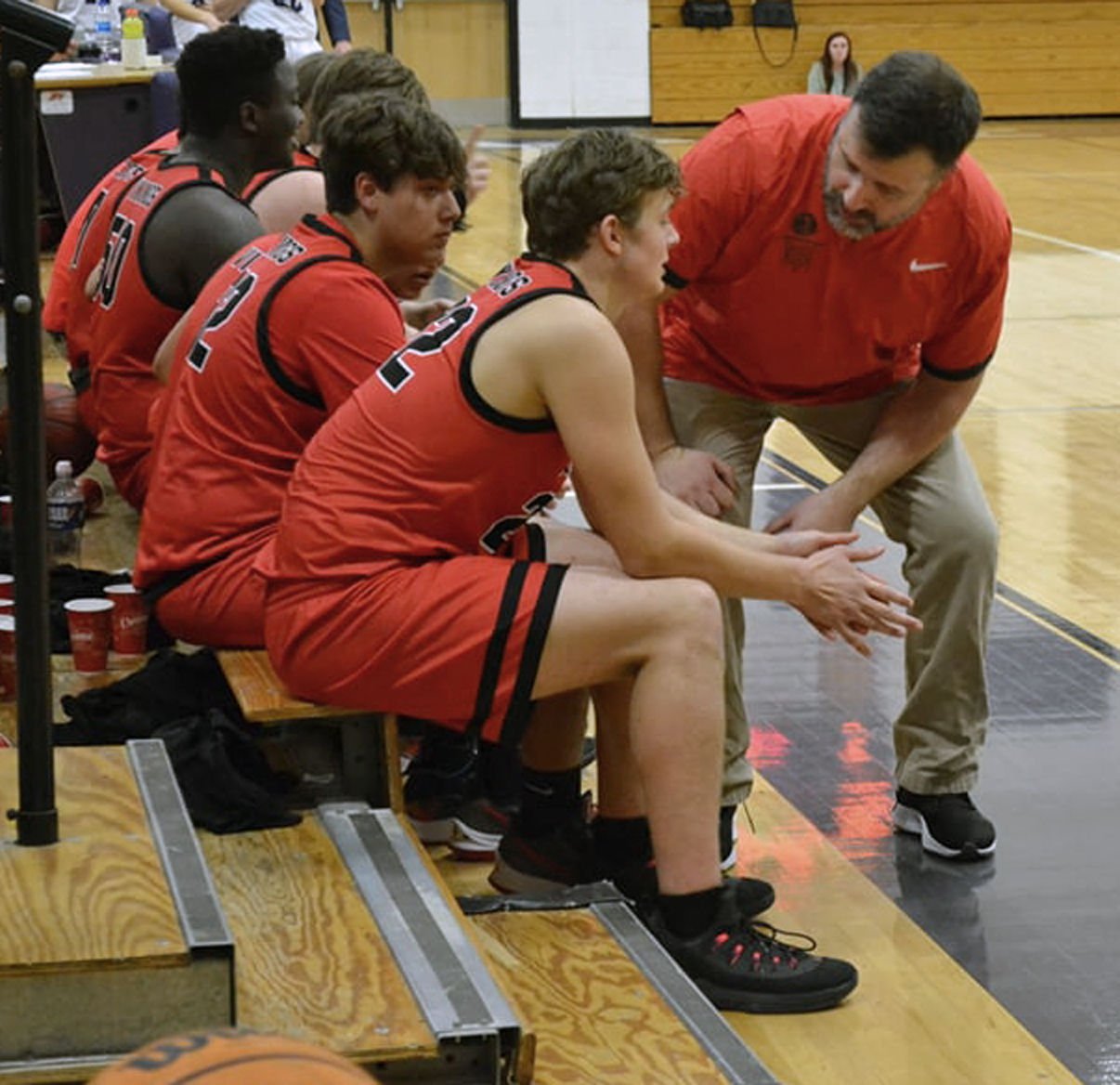 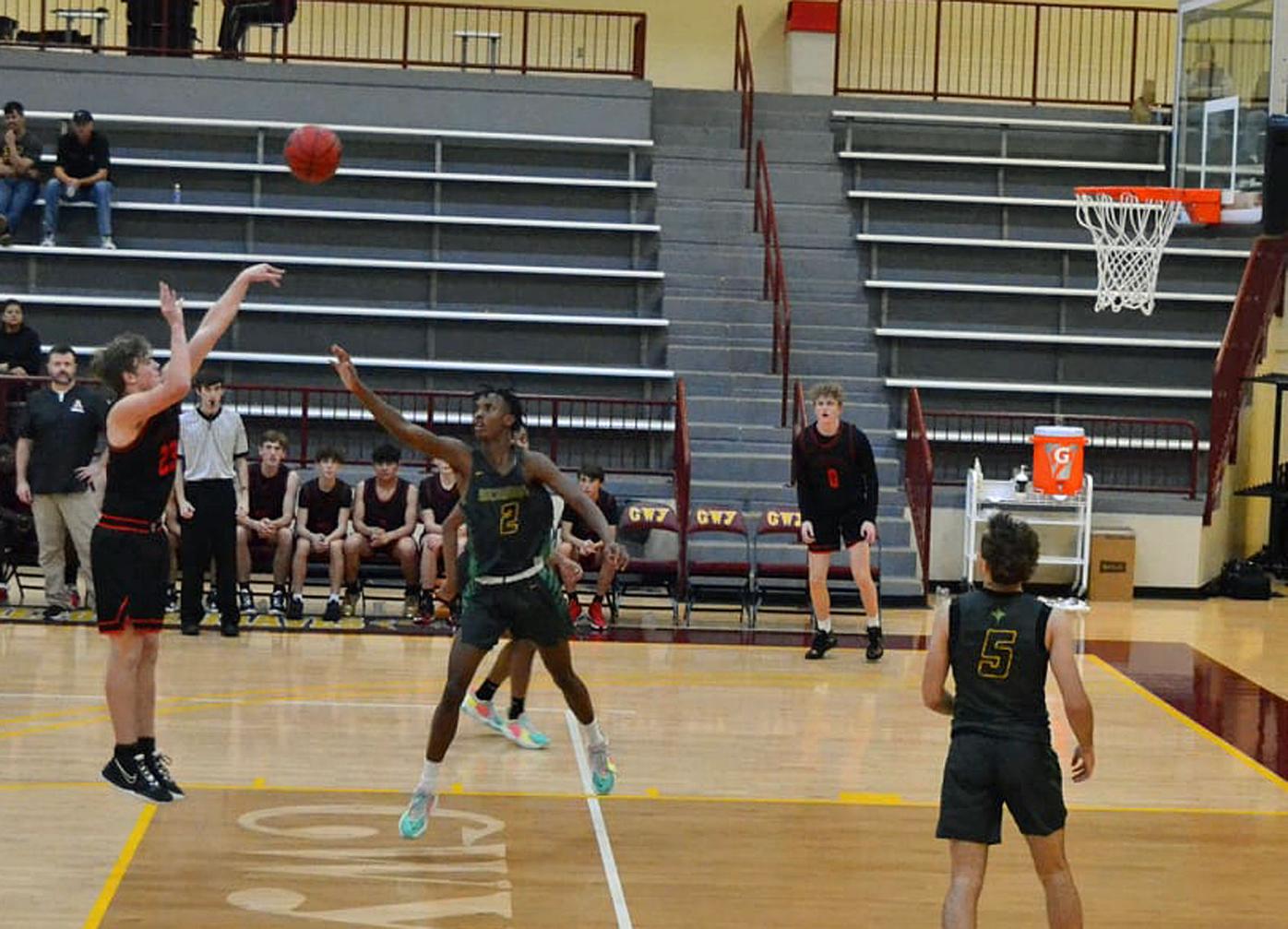 Avery’s Lukas Hughes shoots a jumper from the free throw line against Richmond County during the Holidays on the Hardwood Christmas Tournament at Cherokee High School. 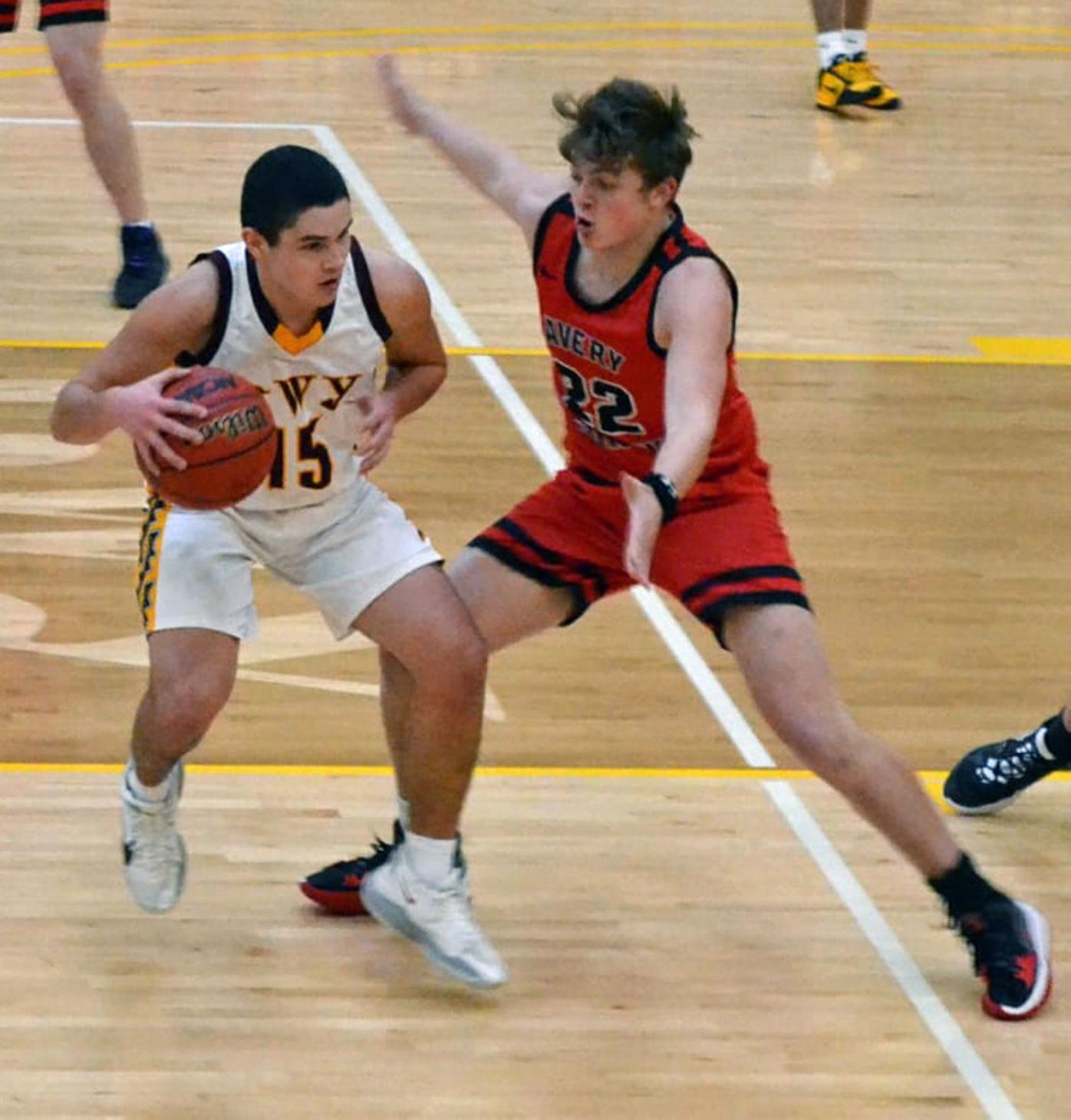 Landon Hughes picks up defense on a Cherokee player during a Viking win at the Holiday on the Hardwoods Tournament. 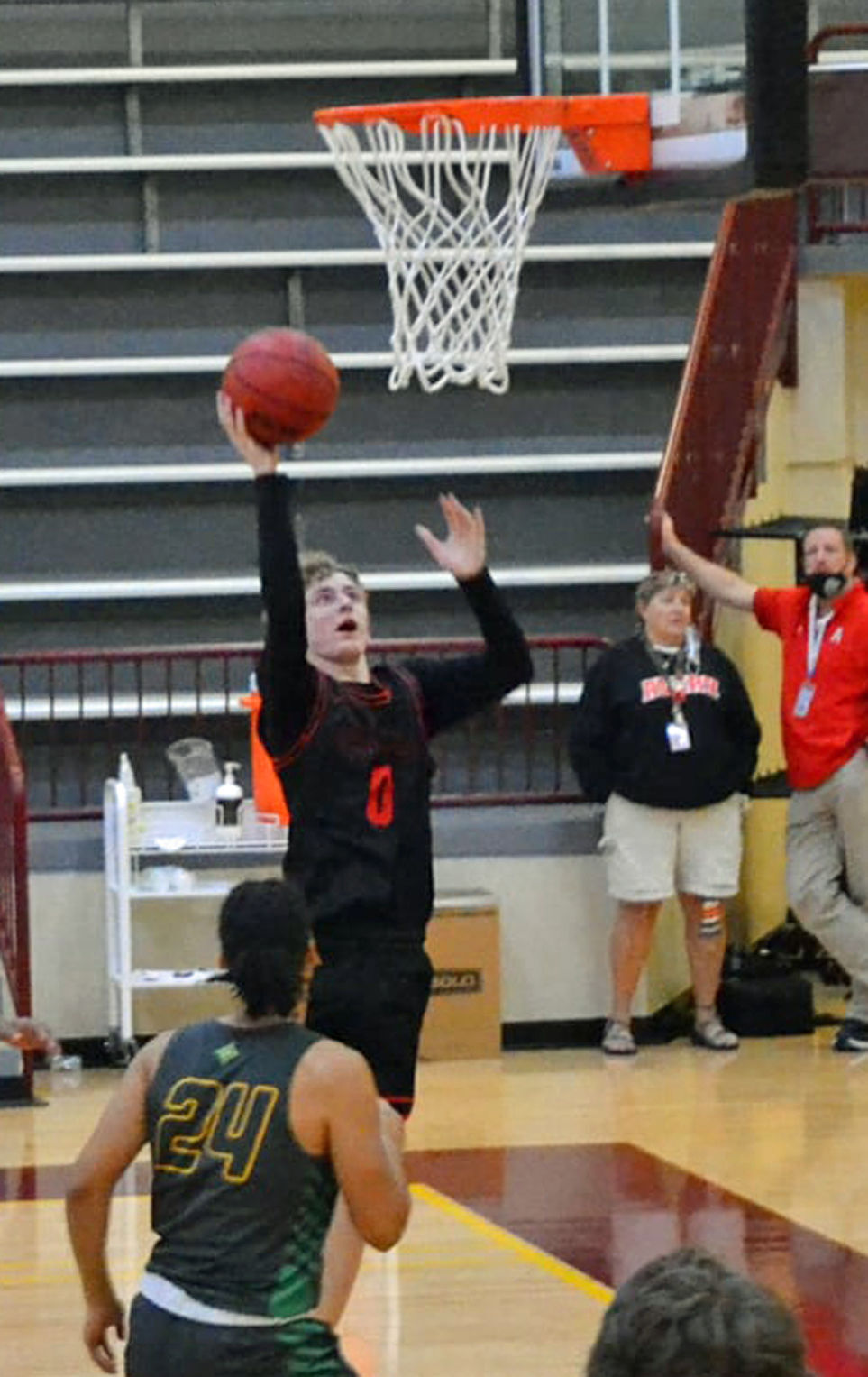 Avery’s Landon Ingham rises for a baseline shot against Richmond County during the Holidays on the Hardwood Tournament. 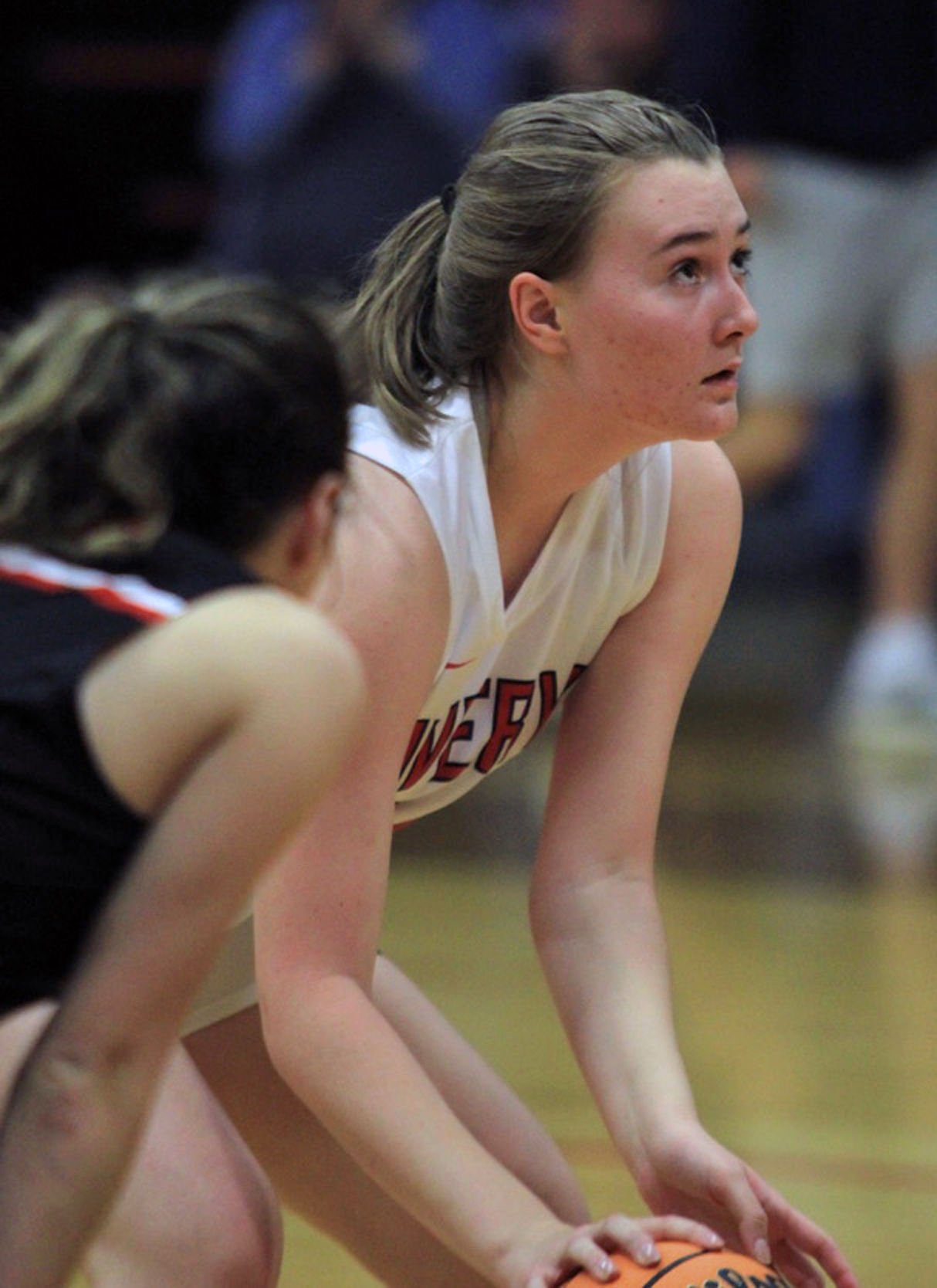 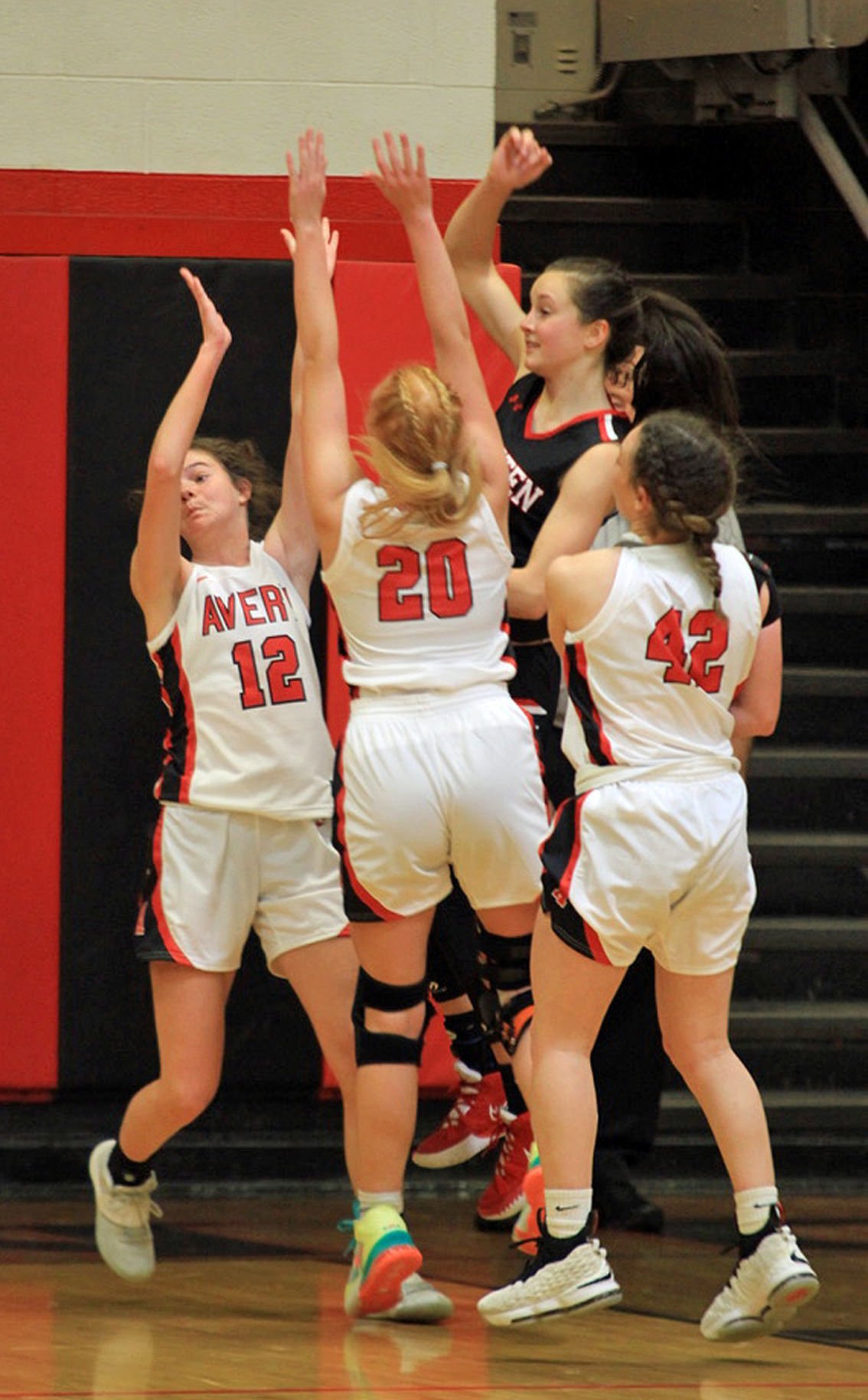 Avery teammates Carter Peterson, Khloe Burleson and Maddy Barrett converge on defense in action at Viking Gym earlier this season. The Lady Vikings re-enter conference play this week after three games to close out 2021 at the Cherokee Holidays on the Hardwood Tournament.

Avery’s Lukas Hughes shoots a jumper from the free throw line against Richmond County during the Holidays on the Hardwood Christmas Tournament at Cherokee High School.

Landon Hughes picks up defense on a Cherokee player during a Viking win at the Holiday on the Hardwoods Tournament.

Avery’s Landon Ingham rises for a baseline shot against Richmond County during the Holidays on the Hardwood Tournament.

Avery teammates Carter Peterson, Khloe Burleson and Maddy Barrett converge on defense in action at Viking Gym earlier this season. The Lady Vikings re-enter conference play this week after three games to close out 2021 at the Cherokee Holidays on the Hardwood Tournament.

The Avery Vikings girls and boys varsity basketball teams made the trip to Cherokee High School to participate in the Holidays on the Hardwood Basketball Tournament in the school’s arena.

The Lady Vikings were unable to pick up a win in three outings during the tournament from Dec. 28 to 30, while the boys varsity Vikings won its tournament opener against host school Cherokee, but fell to unbeaten and 4A ranked Richmond County in a one-sided affair, followed by a high-scoring, five-point defeat to North Buncombe.

The following evening, Avery laced up the sneakers to take on the Richmond County Lady Raiders. Avery worked to build a double-digit lead in the second half, but the Lady Raiders rallied and managed to defeat the Big Red by a 44-40 final score.

For its third matchup of the holiday tournament, Avery took on the Lady Panthers from Franklin High School. Avery battled valiantly throughout the contest, but fell short by a final score of 54-51.

Avery’s record stands at 2-10 overall, with a 1-1 record in Western Highlands Conference play.

Boys take one of three in CherokeeCHEROKEE — The boys varsity squad entered last week’s Cherokee tournament with a 7-2 overall record, and sit atop the Western Highlands Conference with an unbeaten 2-0 mark.

The Vikings prepared with several practice for its first-night opponent, host Cherokee. The practices paid off, as the Big Red pulled away in the second half to defeat the Braves by a final score of 62-49.

“Cherokee is a good 1A team that has beaten some pretty good teams. They shoot the three well and run the floor really hard, but we’d had a couple of good days of practice and I felt like we were playing really well,” Avery Boys Head Coach Cody Frady said of the win over the Braves. “That was a really big for us, being a 1A win.”

Among the strong performers for the Vikings that Frady noted was Lukas Hughes, who the coach said had played well throughout the tournament.

“Lukas is one of those guys who doesn’t score a ton, but he does so many other things well,” Frady said.

According to Frady, the win over Cherokee was Avery’s strongest performance during the tournament.

“I believe we had our best performance against Cherokee,” Frady added. “We were able to prepare for Cherokee, and that was the only team we were sure we were playing, so we practiced specifically to prepare for them, so we played best against them.”

In its second round game on Dec. 29, the Vikings ran into a juggernaut in eventual tournament champion Richmond County. Despite being in position defensively and challenging shots by the athletic and extremely fast Raiders, Richmond County opened up a 31-8 lead after one period, and extended its advantage to 53-24 at the half.

Avery continued to struggle to keep up on offense with the Raiders, managing only 22 second-half points (11 in each of the third and fourth quarters), while the Richmond club poured in another 45 second-half points to improve to 10-0 with a 98-46 win.

“Against Richmond, they were the No. 3-ranked 4A team in the state. They’ve got a really good sophomore named Paul McNeil who has a couple of offers from ACC schools, and they were really, really tough, winning the championship by about 30 points. They’d beaten defending 1A champion Lincoln Charter in the first round, also,” Frady explained. “That first quarter with them, I felt like we played pretty good defensively. Everything they made, they had a hand in their face. We contested all their shots and we played pretty well, but they simply did not miss. Once we got behind, they were very athletic and fast with size, and it kind of snowballed on us. They were incredibly talented across the board.”

Though the final score was one-sided, the seeds planted from exposure to such a strong team may mature to serve the Vikings well later in the season facing smaller and more local schools, especially in conference play.

“I’m always a firm believer that you’ll only get better as a team in one of two ways, by either playing the game by yourself, or by playing others who are better than you. That game got out of hand by about halftime, but I told the guys at the half that we were going to view the second half as a practice opportunity, getting ready for the rest of our conference schedule and to work on us getting better,” Frady explained.

In its tournament swan song, the Vikings tangled with the North Buncombe Blackhawks. Avery fell behind early in the game as it struggled against the Blackhawk press defense. The Big Red showed poise, however, as the club mounted a second-half rally, playing the fourth quarter without one of its leaders on the floor in Landon Ingham due to an injury, but the Vikings fell just short of the dramatic win, falling by the final score of 91-86.

“We completely expected them to play zone defense against us in that game, and they instead pressed us. With that being our third game in three days, we were a bit tired and we were down around 20 in the first quarter,” Frady said. “We managed to come back and cut the lead to as little as three points but just couldn’t ever overcome that early deficit. We just didn’t seem very focused. With a young team of players, I told the guys after the game that this is the sort of thing that happens when you’re not mentally prepared to play. That’s just another chance for us to learn and improve.”

Although the Vikings were on the short end of the scoreboard in two of its matchups, Frady was proud of his team’s unwillingness to lay down and quit, giving their all during the event.

“We need practice. I’ve got a very coachable, hard working group. We played three teams in a three-day span that all did different things very well,” Frady said. “It’s hard to have one practice to prepare for Cherokee, then enter those next two days going in a little bit blind. We play much better with a day of practice in between.”

Avery returns to the floor and conference play this week, with home games scheduled on Tuesday, Jan. 4, against Mountain Heritage and on Friday, Jan. 7, against Madison.