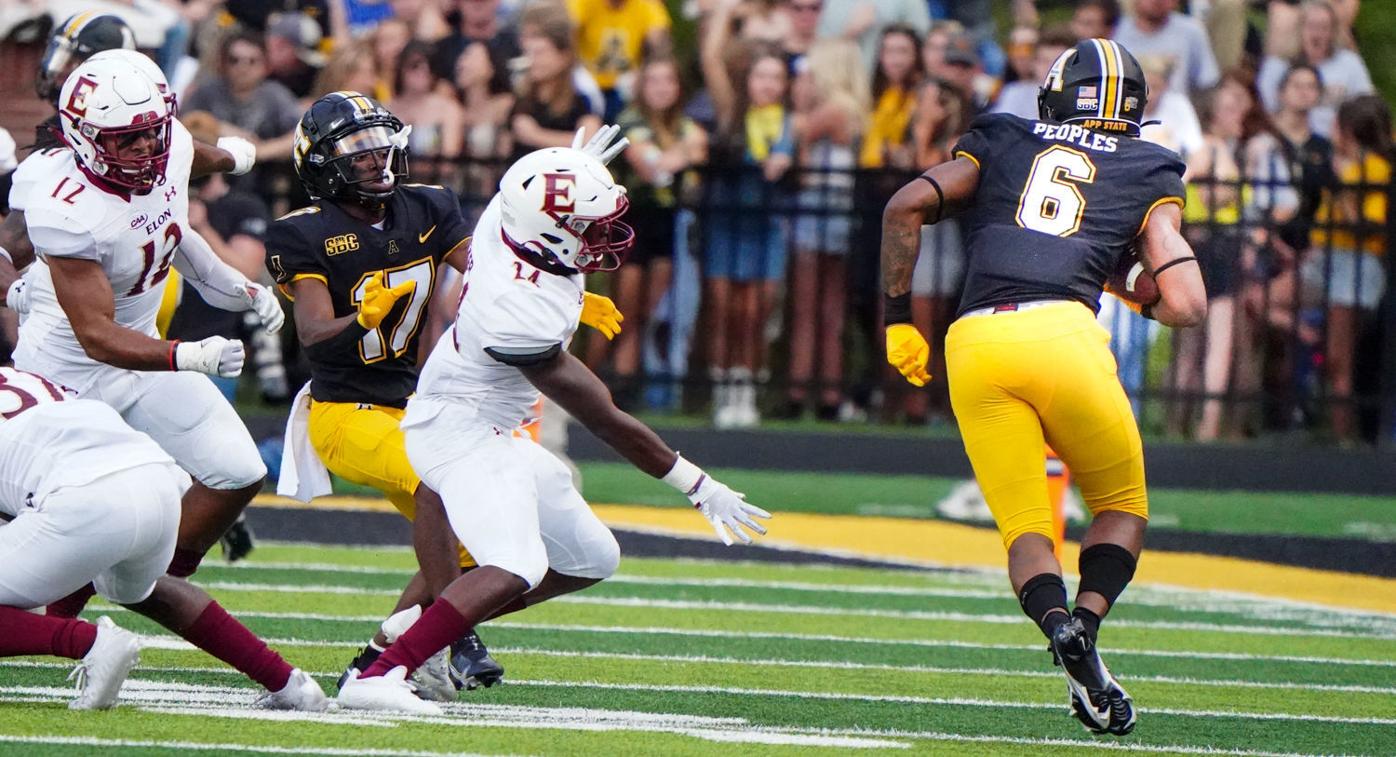 App State running back Camerun Peoples (6) finds room to run around the right side on Sept. 18 during the Mountaineers’ 44-10 win over the Elon Phoenix. 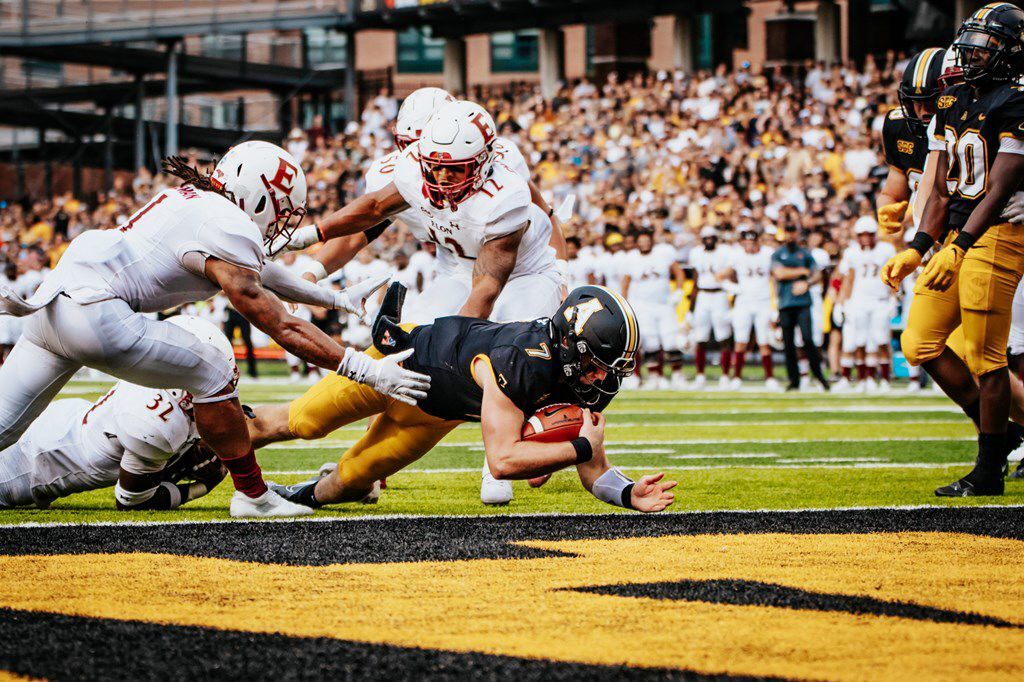 App State quarterback Chase Brice dives across the goal line for a touchdown in the Mountaineers’ win over Elon.

App State running back Camerun Peoples (6) finds room to run around the right side on Sept. 18 during the Mountaineers’ 44-10 win over the Elon Phoenix.

App State quarterback Chase Brice dives across the goal line for a touchdown in the Mountaineers’ win over Elon.

With an above-capacity crowd of 30,224 gathered for App State’s first Boone-based home game with no crowd-size restrictions in 651 days, a 44-10 victory against Elon included a rich mix of gold and black at the end of The Rock’s rainbow — along with a throwback white logo.

T.D. Roof’s 90-yard interception return set up a third-quarter touchdown that gave the Mountaineers (2-1) a 27-3 lead on a day they honored Hall of Fame coach Jerry Moore by unveiling a statue and dedicating a plaza bearing his name. Black helmets with colorful stripes and white ‘A’ logos even paid tribute to Moore’s first team in 1989.

Thirty-two years later, Moore was on hand as one of his mid-90s standouts, Shawn Clark, coached App State in a full Kidd Brewer Stadium for the first time.

“We have the best fans in college football who are very passionate,” Clark said. “It was exciting to come back to The Rock in our new $50 million complex with a sold-out crowd. Our fans were here, they were behind us, and we appreciate that, and now we need our fans on Thursday night.”

D’Marco Jackson delivered a career-high three sacks among his 4.5 tackles for loss and 13 stops to lead a stout defense that limited Elon (1-2) to 291 yards of offense. On special teams, Chandler Staton converted all three of his field-goal tries, including a 45-yarder late in the first half.

Offensively, quarterback Chase Brice had a rushing touchdown to go along with a 19-of-25 passing effort for 293 yards and one more touchdown. Malik Williams produced the first score with a 47-yard touchdown on his way to a career-high 123 receiving yards on four catches, and Corey Sutton caught seven passes for 128 yards as the Mountaineers had two receivers eclipse the century mark.

Roof’s end-zone interception return off a tipped pass set up the first of two touchdown runs from Camerun Peoples, who finished with 80 yards on 11 rushes, and Nate Noel contributed 73 yards on 17 carries. Local product Anderson Castle’s first career touchdown came on an 8-yard run in the final minute.

“We’ve been waiting a long time for this, and we wanted to put a good show on just for them,” Williams said of the fans. “Having them out there felt amazing. A couple of the receivers, we were nervous starting out seeing all the fans, but it felt good.”

Jackson’s career day included sacks in the first, second and fourth quarters. He joined Jordan Fehr (2018 vs. Coastal Carolina) and Eric Boggs (2015 vs. Louisiana) as the only App State players in the FBS era with three sacks in a single game.

Perhaps his biggest hit came right before a sack, as he leveled a pass-catching running back for a 5-yard loss in a one-on-one showdown out in space. His 4.5 tackles for loss are the most by an App State player in the FBS era.

“On defense, we were having trouble trying to communicate because it was so loud, but on defense we fed off that energy by our supporters,” Jackson said. “It was awesome.”

App State nearly scored on its opening possession but lost a fumble into the end zone. The next series began with a 26-yard completion to Sutton and ended with a 47-yard strike to a streaking Williams.

Only a few plays into the second quarter, Brice had thrown for 179 yards with an 8-for-8 start.

“When you’re seeing the defense and seeing rotation, you can kind of anticipate where your guys are going to be,” Brice said. “It also helps when they’re wide open, and it’s about giving my guys a chance. I think I did a better job of that today — putting the ball out there and letting them go make a play. Letting them catch and run, and kudos to ‘The Bulls’ up front. They did a great job of protecting me today. I only got hit one time, and that’s on me for holding the ball too much.”

The game remained relatively close into the third quarter, as Staton made a 44-yard field goal early in the second quarter and drilled a 45-yarder right before halftime to help the Mountaineers take a 13-3 lead into their new locker room.

A 27-yard pass to Jalen Virgil kickstarted App State’s second possession of the third quarter, and Noel’s 5-yard run on a fourth-and-4 play from the Elon 8 extended the series. Three plays later, Brice scored from the 1.

The Phoenix reached App State’s 9 on the next possession, and Roof was trailing a receiver when the ball bounced off the Elon’s players hands in the end zone. The ball went right to Roof, who sprinted down the left sideline and was finally brought down at the Phoenix 10.

“Every blind squirrel finds a nut once in a while,” Roof said. “Just kind of right spot, right time. I obviously got hawked (down) and was pretty gassed, but we can work on that.”

The Mountaineers closed the game by forcing another turnover, thanks to a Logan Doublin hit that led to a recovery by safety Ronald Clarke, and there’s a quick turnaround as App State prepares for its next game.

On Thursday, Sept. 23, Marshall comes to Boone to face the Mountaineers in a nationally televised game at 7:30 p.m. on ESPN.

“I’m very proud of our football team,” Clark said. “Winning in college football is hard, and it doesn’t matter if it’s 1-0 or 100-0, a win is a win. There’s an old saying in football that there’s no such thing as a bad win. We have a lot of things to get cleaned up and a lot of things to learn from coming back on a short week.”

Emmanuel Akot is healthy, comfortable and primed for a breakout year for the Broncos