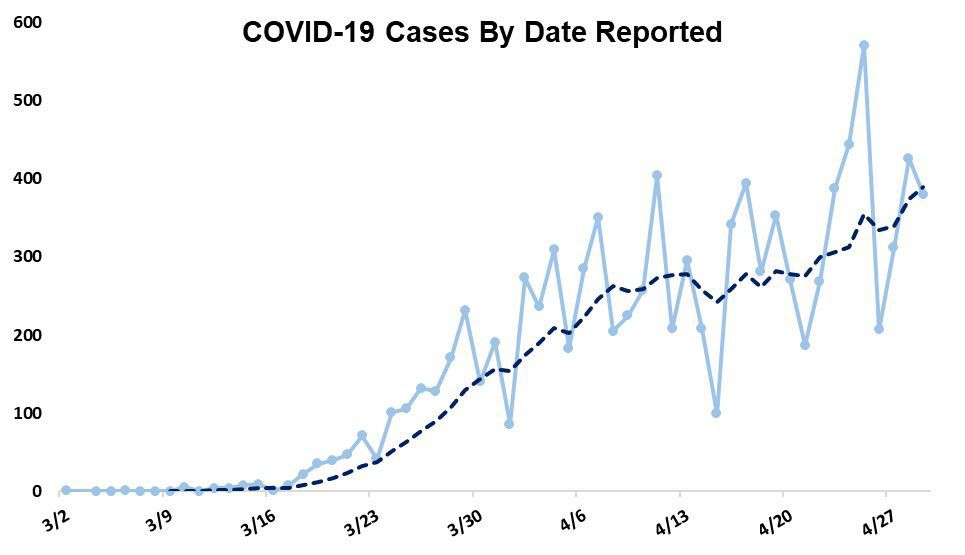 RALEIGH — Positive tests for COVID-19 in North Carolina are reported at 9,948, while 551 people were hospitalized and 354 individuals have died as a result of the virus as of 11 a.m. on Wednesday, April 29, according to the N.C. Department of Health and Human Services.

The Raleigh News & Observer newspaper reported that 361 individuals have died from the virus, with 9,739 cases statewide as of 11 a.m. on Wednesday, April 29.

A total of 118,440 tests had been completed by the N.C. State Laboratory of Public Health and reporting hospitals and commercial labs as of April 29, according to N.C. DHHS.

Avery County has reported no positive tests for COVID-19 as of April 29, one of only two North Carolina counties, along with Yancey County, yet to report a positive test for the virus. According to Toe River Health District, which includes Avery County Health Department, 78 people in Avery County have been tested, with 75 negative results and three tests pending.

Yancey County reports no positive COVID-19 tests as of April 29, as 97 tests have been administered in the county with 95 negative results and two current results pending, according to the Toe River Health District.

“We have two counties that have not received a positive result as of yet. This does not mean there are not positive cases here. This just indicates that no one we have tested is positive nor have we been notified of a positive from another area coming here,” according to Avery County Health Department.

A total of 127 people have been tested in Mitchell County, with 117 negative results, with five results pending. The county has reported five total positive tests for COVID-19, according to TRHD, with all five cases having recovered.

Swain and Hyde counties each reported their first positive case of COVID-19 within the past 24 hours.

Watauga County has eight positive tests among residents, plus a traveler who tested positive who is self-isolating in the county, according to AppHealthCare, the district health department for Watauga, Ashe and Alleghany counties.

Statewide, Mecklenburg County has reported the most cases with 1,519. Wake County is reporting 769 and Durham 776 cases as of 11 a.m. on April 29, according to the newspaper.

How to Protect Yourself & Others

People at high risk include anyone who:

If You Are Sick