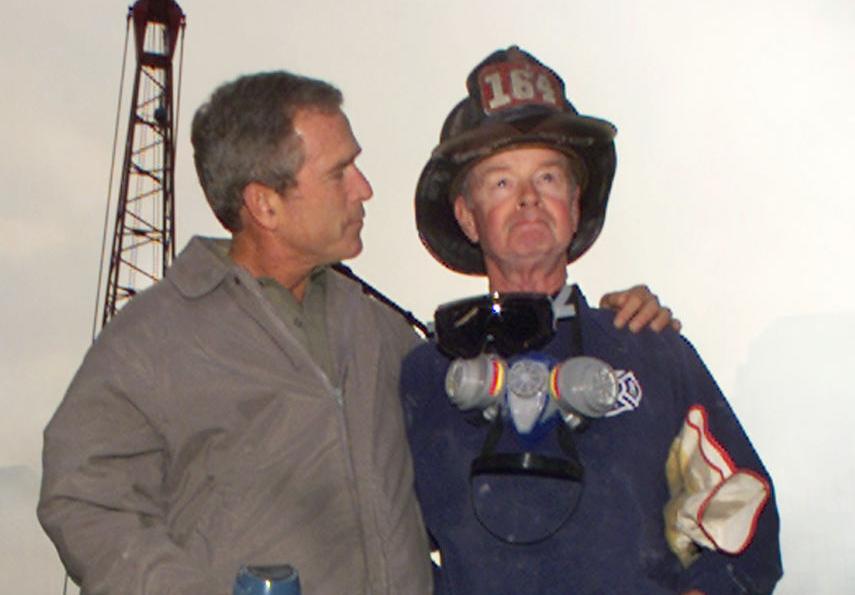 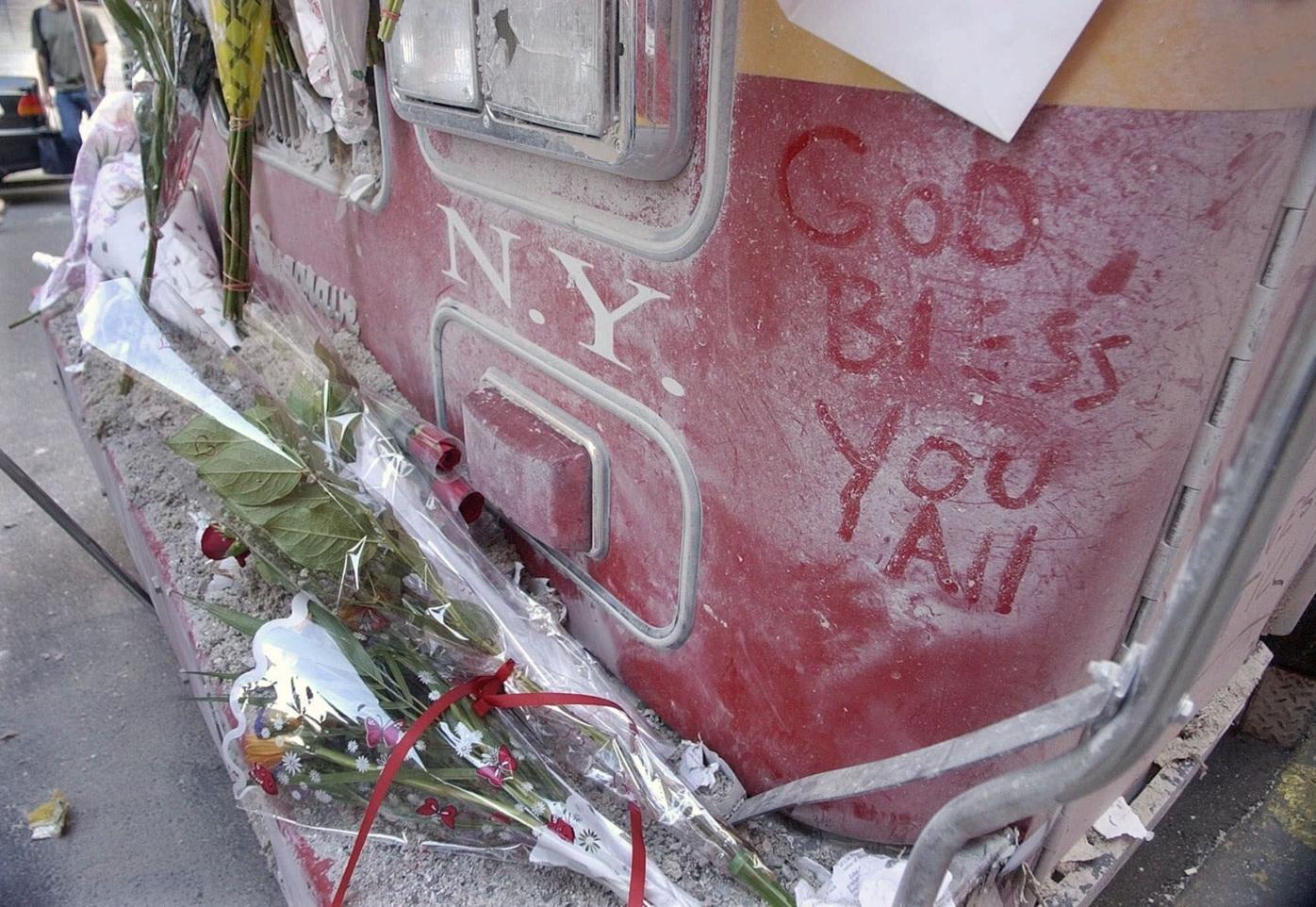 In this Wednesday, Sept. 12, 2001, photo, flowers and messages written on the dust-coated ladder truck of Ladder Company 24 are seen a day after the terrorist attack on the World Trade Center in New York. Ladder Company 24 lost seven firemen in the attack, including Fire Chaplain Father Mychal Judge.

In this Wednesday, Sept. 12, 2001, photo, flowers and messages written on the dust-coated ladder truck of Ladder Company 24 are seen a day after the terrorist attack on the World Trade Center in New York. Ladder Company 24 lost seven firemen in the attack, including Fire Chaplain Father Mychal Judge.

On Sept. 11, 2001 — 20 years ago this Saturday, 19 al-Queda terrorists hijacked four commercial US jetliners, deliberately crashing two of the planes into the North and South towers of the World Trade Center in New York City, and a third plane into the Pentagon in Washington, DC. After learning of the other attacks, passengers and crew members of the fourth plane attempted to commandeer control and the plane was crashed into an empty field in western Pennsylvania.

Nearly 3,000 people died on 9/11, the single largest loss of life from a foreign attack on American soil in history.

“Um, we’re sitting in the back, um, and the cockpit is not answering.” Ong said. “Somebody is stabbed in business class — and um, I think there’s mace — we can’t breathe. I don’t know, I think we’re getting hijacked.”

Ong’s chilling and grim warning call from the Boeing 767 en route from Boston to Los Angeles eventually alerted US authorities that hijackings were under way.

More than 20 minutes into the call, Gonzalez said, “She doesn’t have any idea who the stabbed passenger might be in first (class). Apparently, they might have spread something, so they’re having a hard time breathing. What’s going on Betty? Betty, talk to me. Betty, are you there? Betty? What? Do you think we lost her? Okay so we’ll like keep the line open. We — I think we might have lost her.”

Within two minutes, WNYW broadcast news of the crash and in rapid succession major networks, radio and cable television documented the horrific events of 9/11 live for the world to see; including the unforgettable nightmare of citizens overcome by fire and smoke leaping to their fates 90 floors below, the beginning of an unwanted and unjustified infamy forever burned into the American conscience.

In 2004, in testimony before the Commission on Terrorist Attacks Upon the United States, known as the 9/11 Commission, Gonzalez fought her emotions as she described the call:

“Several media accounts of what occurred on Flight 11 claim that Betty was ‘hysterical with fear,’ ‘shrieking,’ and ‘gasping for air.’” Gonzalez testified. “I am here to tell this commission that those accounts are wrong.

“Betty was calm, professional and in control throughout the call. I honestly believe, after my conversation with Betty, that the 81 passengers and nine crew members on Flight 11 had no idea of the fate they were to encounter that day.”

As the world witnessed, Betty Ong was but one hero of 9/11. Her warning call led to air traffic controllers landing every plane flying over US airspace. But not in time for the passengers and crew of Flight 175, which slammed into the South Tower of the WTC at 9:02 a.m.

Or for the 64 people aboard American Airlines Flight 77 and the 125 Pentagon personnel who perished as the Boeing 757 torpedoed the US Department of Defense at 9:38 a.m.

And just 10 minutes before the Pentagon was hit, flight controllers in Cleveland, Ohio overheard hijackers storm the cockpit of United Airlines Flight 93, en route from Newark, NJ to San Francisco.

Passengers and some of the crew of Flight 93 began making phone calls to officials and family members starting at 9:30 a.m. Learning of the events on the ground, the passengers revolted at 9:58 a.m. The cockpit voice recorder captured the sounds of crashing, screaming and the shattering of glass.

The heroic passengers were successful, Flight 93 never made it to the terrorists’ intended target, crashing into an empty field at 10:03 a.m. in Somerset County, Pa. — about 20 flying minutes outside Washington, DC. The 9/11 Commission believed that Flight 93’s target was either the United States Capitol building or the White House.

Unfortunately, passengers of Flight 93 were not the last to perish that morning. The burning WTC Towers collapsed: the South Tower at 9:59 a.m., the North Tower at 10:28 a.m. Hundreds of firefighters, paramedics and police officers gave their lives attempting to save those trapped in the burning towers.

At 8:30 p.m. President George W. Bush addressed the nation from the White House: “Today, our fellow citizens, our way of life, our very freedom came under attack in a series of deliberate and deadly terrorist acts. Terrorist attacks can shake the foundations of our biggest buildings, but they cannot touch the foundation of America. These acts shatter steel, but they cannot dent the steel of American resolve, and the search is under way for those who are behind these evil acts ... we will make no distinction between the terrorists who committed these acts and those who harbor them.”

Almost 10 years following the attacks of 9/11, on May 1, 2011, President Barack Obama held an address to the nation from the White House informing the American people of the capture and death of Bin Laden, sparking impromptu reactions of relief and celebration from American citizens.

“It was nearly 10 years ago that a bright September day was darkened by the worst attack on the American people in our history. The images of 9/11 are seared into our national memory — hijacked planes cutting through a cloudless September sky; the Twin Towers collapsing to the ground; black smoke billowing up from the Pentagon; the wreckage of Flight 93 in Shanksville, Pa., where the actions of heroic citizens saved even more heartbreak and destruction.

“And yet we know that the worst images are those that were unseen to the world. The empty seat at the dinner table. Children who were forced to grow up without their mother or their father. Parents who would never know the feeling of their child’s embrace. Nearly 3,000 citizens taken from us, leaving a gaping hole in our hearts,” President Obama said.

“On Sept. 11, 2001, in our time of grief, the American people came together. We offered our neighbors a hand, and we offered the wounded our blood. We reaffirmed our ties to each other, and our love of community and country. On that day, no matter where we came from, what God we prayed to, or what race or ethnicity we were, we were united as one American family.

“We were also united in our resolve to protect our nation and to bring those who committed this vicious attack to justice. We quickly learned that the 9/11 attacks were carried out by al Qaeda — an organization headed by Osama bin Laden, which had openly declared war on the United States and was committed to killing innocents in our country and around the globe. And so we went to war against al Qaeda to protect our citizens, our friends, and our allies.

“Over the last 10 years, thanks to the tireless and heroic work of our military and our counterterrorism professionals, we’ve made great strides in that effort... and around the globe, we worked with our friends and allies to capture or kill scores of al Qaeda terrorists, including several who were a part of the 9/11 plot. Yet Osama bin Laden avoided capture and escaped across the Afghan border into Pakistan. Meanwhile, al Qaeda continued to operate from along that border and operate through its affiliates across the world... Today, at my direction, the United States launched a targeted operation against a compound in Abbottabad, Pakistan. A small team of Americans carried out the operation with extraordinary courage and capability. No Americans were harmed. They took care to avoid civilian casualties. After a firefight, they killed Osama bin Laden and took custody of his body.

“For over two decades, bin Laden has been al Qaeda’s leader and symbol, and has continued to plot attacks against our country and our friends and allies. The death of bin Laden marks the most significant achievement to date in our nation’s effort to defeat al Qaeda.

“Yet his death does not mark the end of our effort. There’s no doubt that al Qaeda will continue to pursue attacks against us. We must — and we will — remain vigilant at home and abroad... The American people did not choose this fight. It came to our shores, and started with the senseless slaughter of our citizens. After nearly 10 years of service, struggle, and sacrifice, we know well the costs of war. These efforts weigh on me every time I, as Commander-in-Chief, have to sign a letter to a family that has lost a loved one, or look into the eyes of a service member who’s been gravely wounded... Yet as a country, we will never tolerate our security being threatened, nor stand idly by when our people have been killed. We will be relentless in defense of our citizens and our friends and allies. We will be true to the values that make us who we are. And on nights like this one, we can say to those families who have lost loved ones to al Qaeda’s terror: Justice has been done.

“We give thanks for the men who carried out this operation, for they exemplify the professionalism, patriotism, and unparalleled courage of those who serve our country. And they are part of a generation that has borne the heaviest share of the burden since that September day. Finally, let me say to the families who lost loved ones on 9/11 that we have never forgotten your loss, nor wavered in our commitment to see that we do whatever it takes to prevent another attack on our shores.

“The cause of securing our country is not complete. But tonight, we are once again reminded that America can do whatever we set our mind to. That is the story of our history, whether it’s the pursuit of prosperity for our people, or the struggle for equality for all our citizens; our commitment to stand up for our values abroad, and our sacrifices to make the world a safer place.

“Let us remember that we can do these things not just because of wealth or power, but because of who we are: one nation, under God, indivisible, with liberty and justice for all.”

This will be most consequential week of Biden's presidency