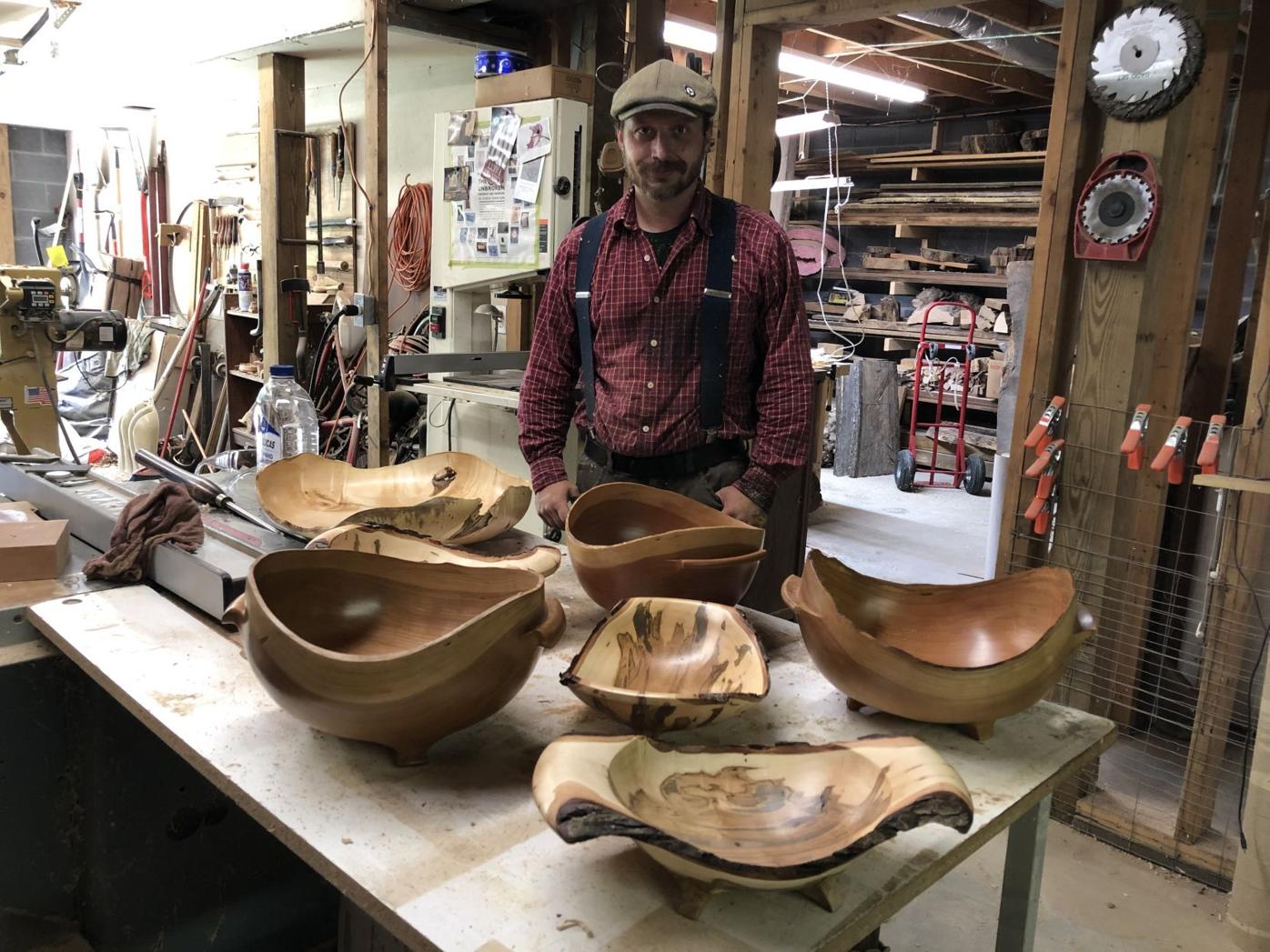 Lucas Hundley has been perfecting his craft for the good part of 26 years. More of his work can be viewed at lucasjhundley.com. 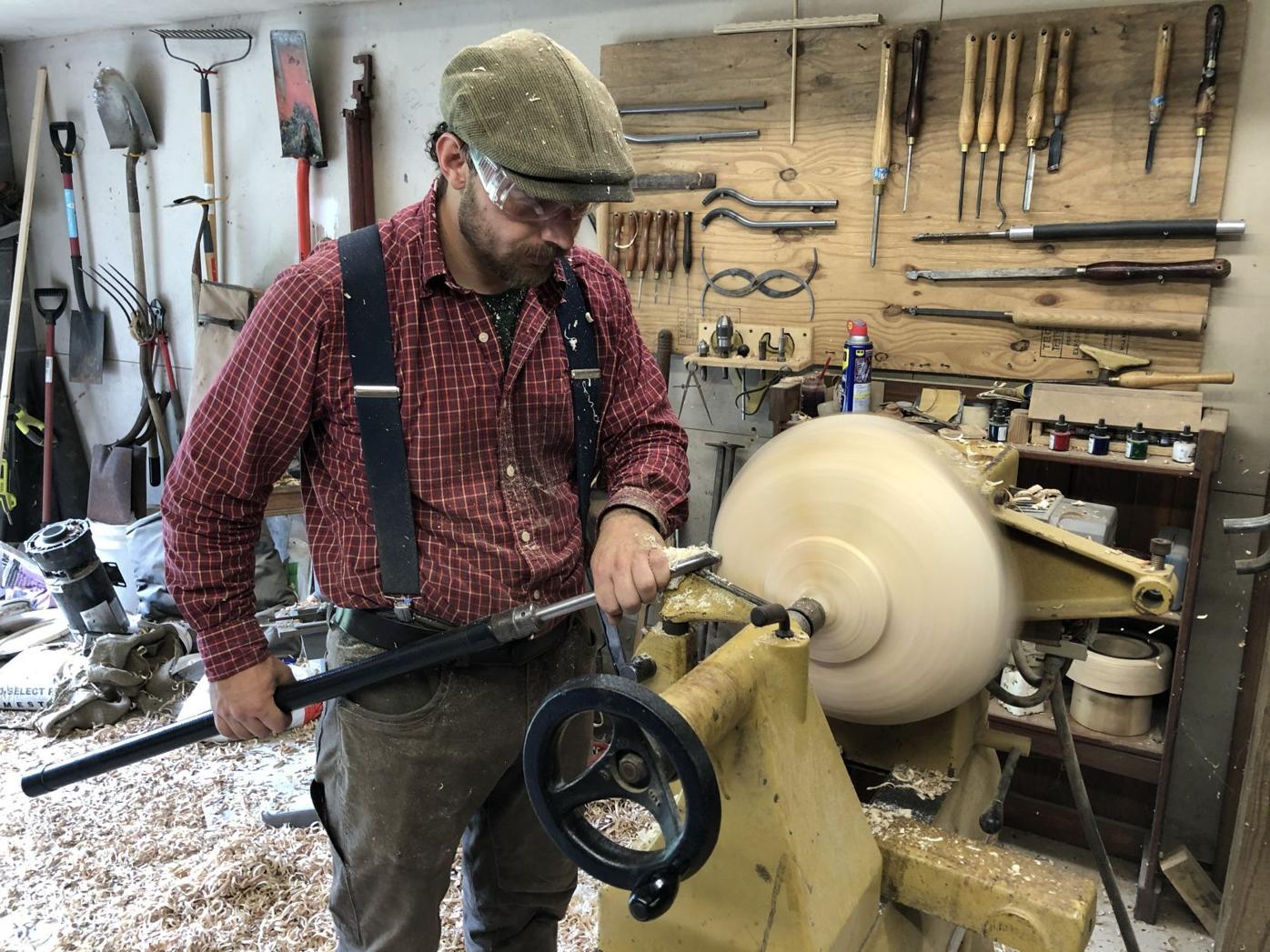 To watch Lucas Hundley create a wooden bowl from start to finish, click to, mountaintimes.com. 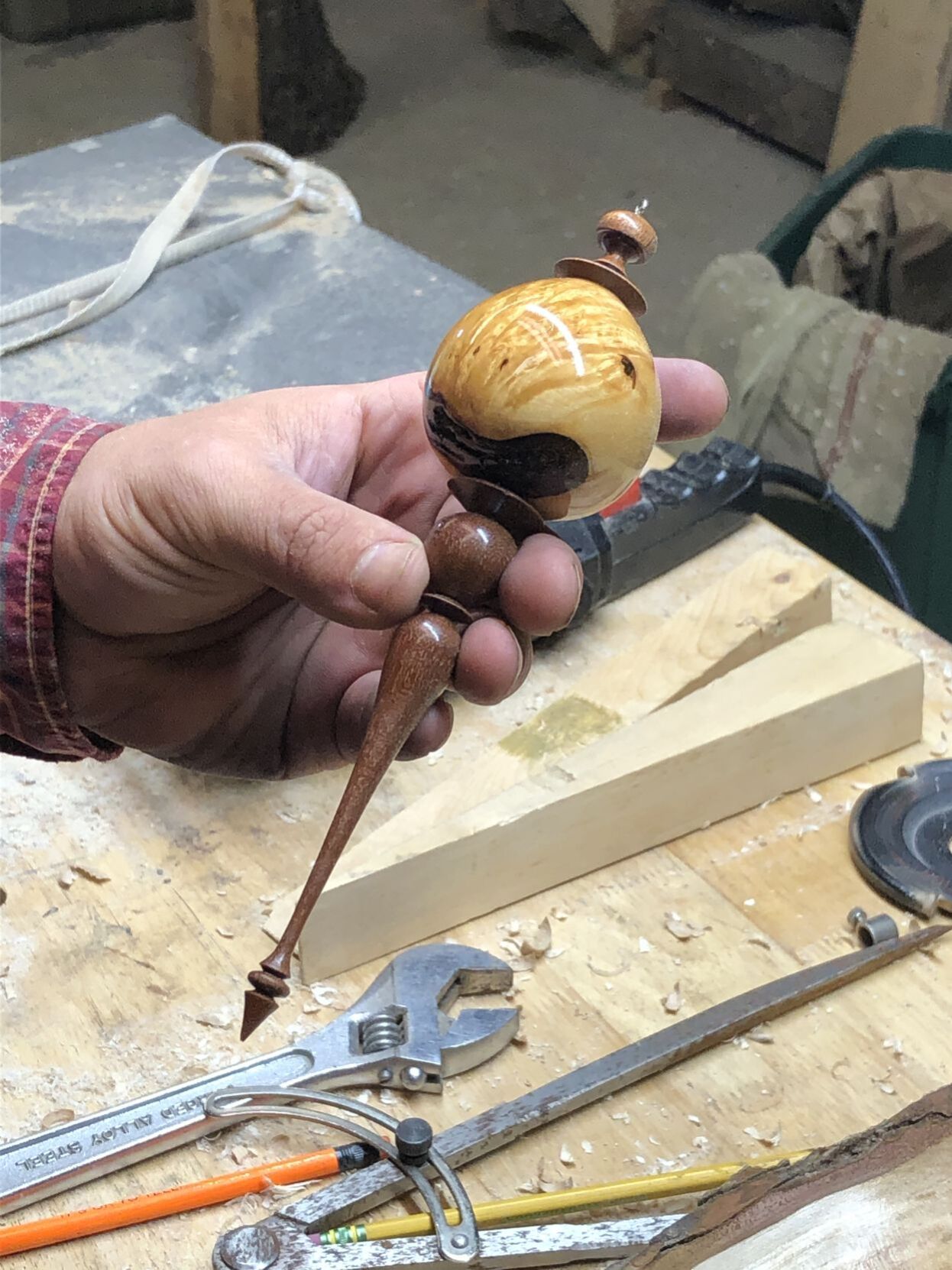 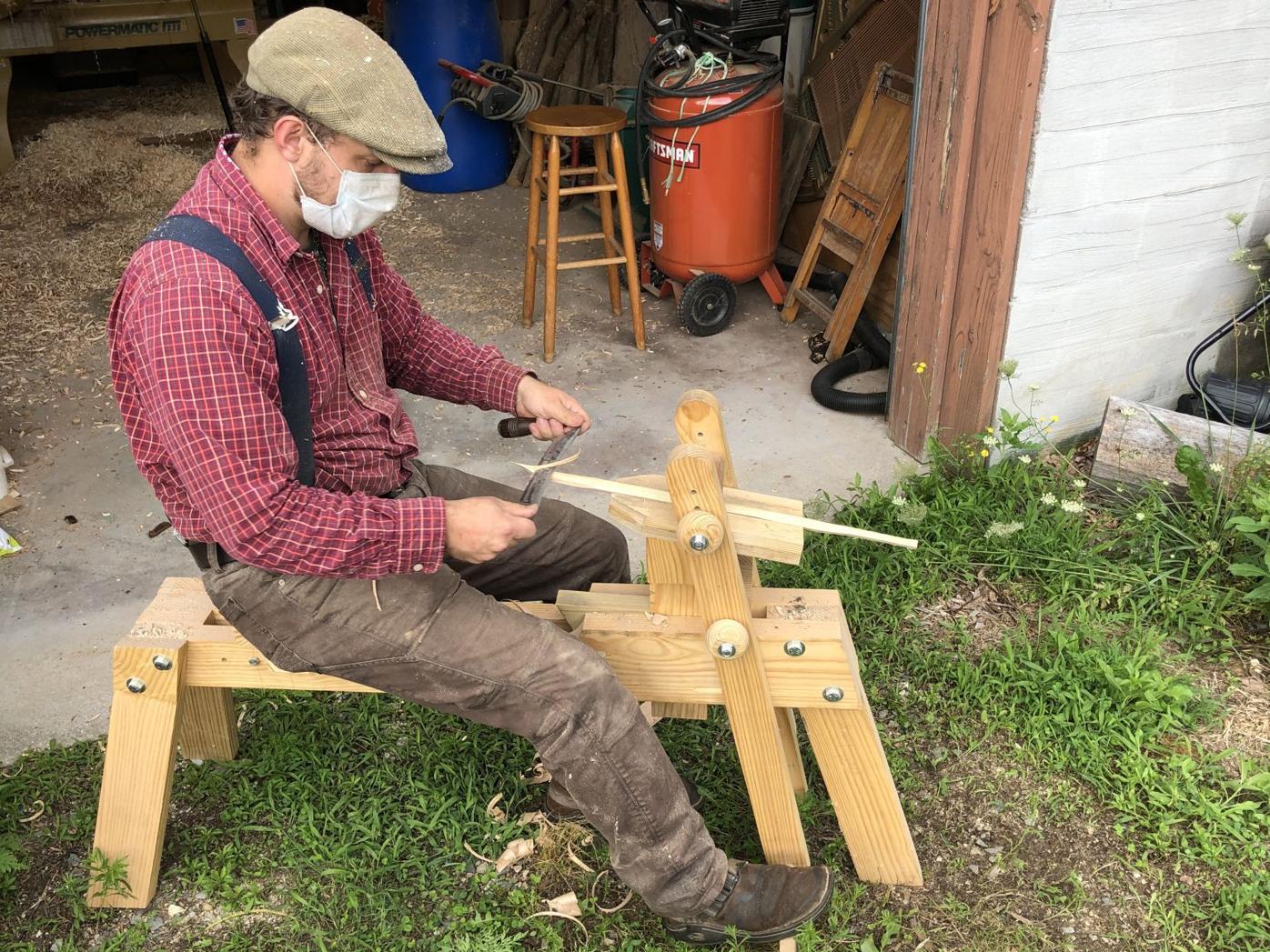 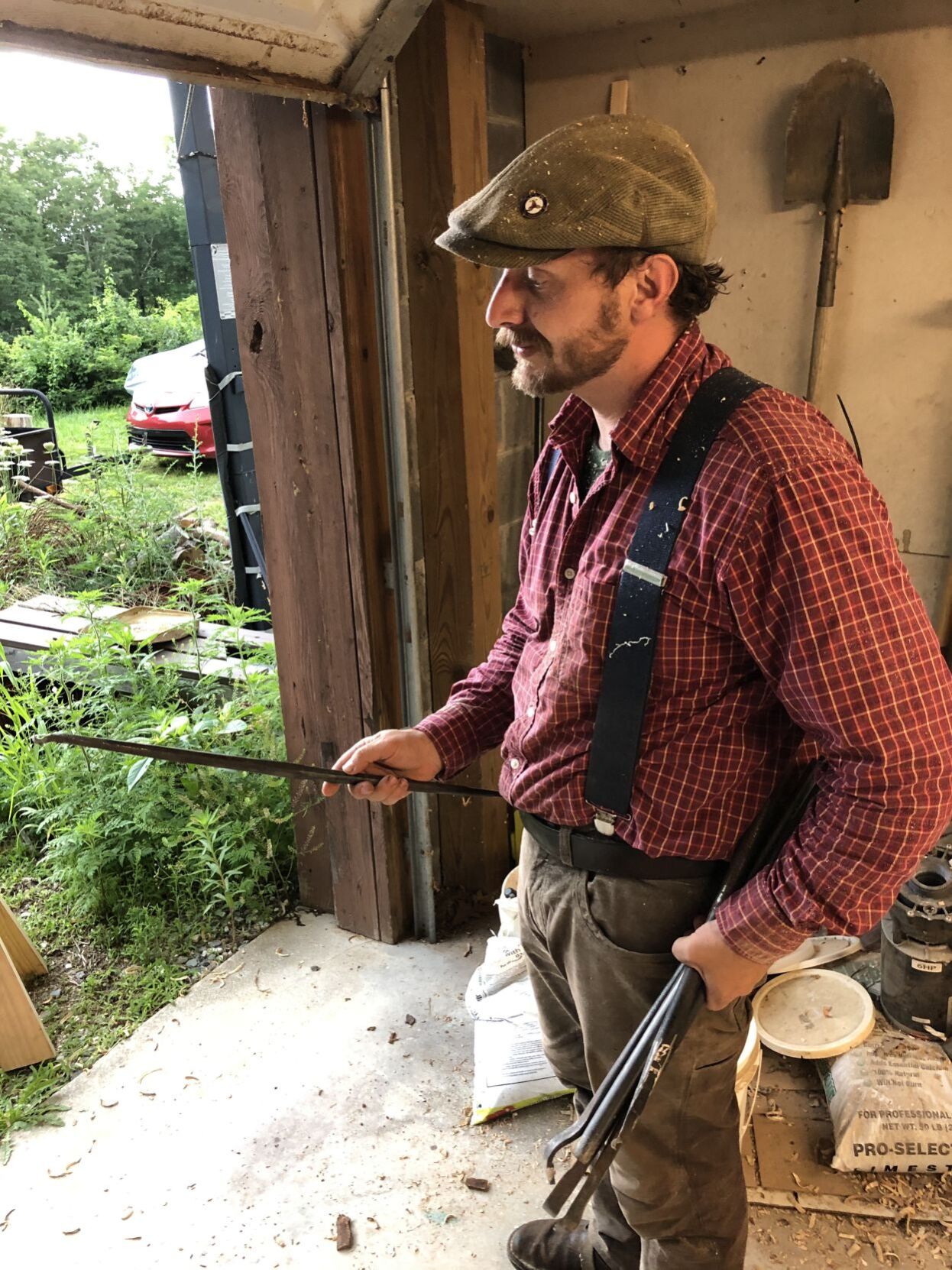 Lucas Hundley has been perfecting his craft for the good part of 26 years. More of his work can be viewed at lucasjhundley.com.

To watch Lucas Hundley create a wooden bowl from start to finish, click to, mountaintimes.com.

JONAS RIDGE — To the layman’s eyes, a block of wood holds limited features outside of its typical utilitarian purposes, but to woodturner and master craftsman Lucas Hundley, a block of wood can hold a nearly endless array of possibilities into which it can be formed.

At his studio in Jonas Ridge, Hundley takes hunks of wood, typically thrown out or discarded after a tree-clearing operation at someone’s property, and literally turns them into pieces of art. Chunks of cherry wood, sugar maple, honey locust and a variety of different types that lay outside of Hundley’s workshop are eventually transformed into an assortment of finely crafted items, such as bowls, ornaments, salt and pepper shakers, lamps and other artifacts. However, Hundley’s repertoire does not stop short of his woodturning skills. Hundley even makes his own handcrafted furniture.

The Appalachian antiquities that line Hundley’s shop are the result of the 34-year-old’s journey to perfect his trade since he began when he was eight years old. Some of his machinery, or Hundley’s equivalent of a painter’s easel, has remained a staple in his life since he began woodworking when his father, former county extension agent Doug Hundley, introduced him to the craft all those years ago. A few items in his shop have even stayed in the drying process for more than two decades.

“At 13, my dad already had us working in tree fields. It’s not my favorite thing to do, so when I was 13 and doing (woodturning) fairly frequently as a hobby and trying to make ornaments and sell them at choose-and-cut lots, Dad was very kind and he talked to Alan Hollar for me about working for him. So it was either work in a tree field or work for Alan,” Hundley said.

Hollar was, and still today, is what Hundley refers to as a “phenomenal woodturner.” Moreover, Hollar is a well-known craftsman across the region and was president of the Southern Highland Craft Guild at one point. As is often the case with apprenticeships, Hundley took the skills he developed with Hollar and went on to improve them further by attending the Appalachian Center for Craft at Tennessee Tech University, where he earned a Bachelor of Fine Arts. Before attending university, Hundley took classes at Haywood Community College, which Hundley stresses has an “amazing program.”

“For anyone looking to do (woodturning), fiber arts, ceramics or jewelry, they have a program that teaches you the skills, the design sense, art history and all that, but they also have a completely separate section that teaches you how to do this for a living,” Hundley said. “The students they produce are quality craftsmen with an idea of how to go out and make a living.”

Throughout the years following his high school education, Hundley had a pair of opportunities to go study in Japan where he became familiar with the Japanese style of woodturning that produces lacquerware or finely decorated objects. The process involves using a sharpened, flat piece of steel to sand the wood as well as using sap from a tree similar to poison sumac to provide a finish that Hundley describes as the “best in the planet.”

“Except for the fact that the wood goes around, it’s completely different,” Hundley said of Japanese woodturning. “The crafts in Japan are taken very seriously. So very rarely do you have people who retire and take up something as a hobby, because you spend your whole life dedicated to a craft over there. You don’t just do it for fun.”

Upon completing his higher education, Hundley went on to pick up various jobs throughout the years, including working for the school system as a tutor, construction, team building and as a production manager for a metal shop, among other occupations. Through it all, Hundley maintained his passion for woodworking, and earlier this year he decided to pursue the passion for his sole livelihood.

Admittedly, as for every other business during the COVID-19 pandemic, things have not gone as planned. Nevertheless, Hundley has experienced navigating harsh economic situations before, having graduated college during the 2009 recession. Hundley envisions his shop as not only being a place in which masterfully crafted art is produced, but also a place where these skills can be passed down to the next generation and apprenticeships can be formed similar to the one that Hundley had with Hollar.

“The one thing that people in (the United States) can do is start their own business, become self employed. I wish there was more of that (focus) in the educational system or at least more opportunities like that, and I would like this business to foster that. I would like to take on students or apprentices to help me make my work, but so they can also learn a skill set so they can start their own business or team up and stay a part of the company,” Hundley said.

To view or learn more about Lucas Hundley’s work, click to lucasjhundley.com/. Additionally, Hundley’s work can be purchased by clicking to etsy.com/shop/HundleyWoodworking or by calling (828) 260-8211.

To watch Lucas Hundley create one of his signature bowls from start to finish, click to averyjournal.com or visit our social media page.