Forest Ranger Joe Shoupe gave his annual report to the board of commissioners during the county’s bimonthly meeting on Monday, July 6. 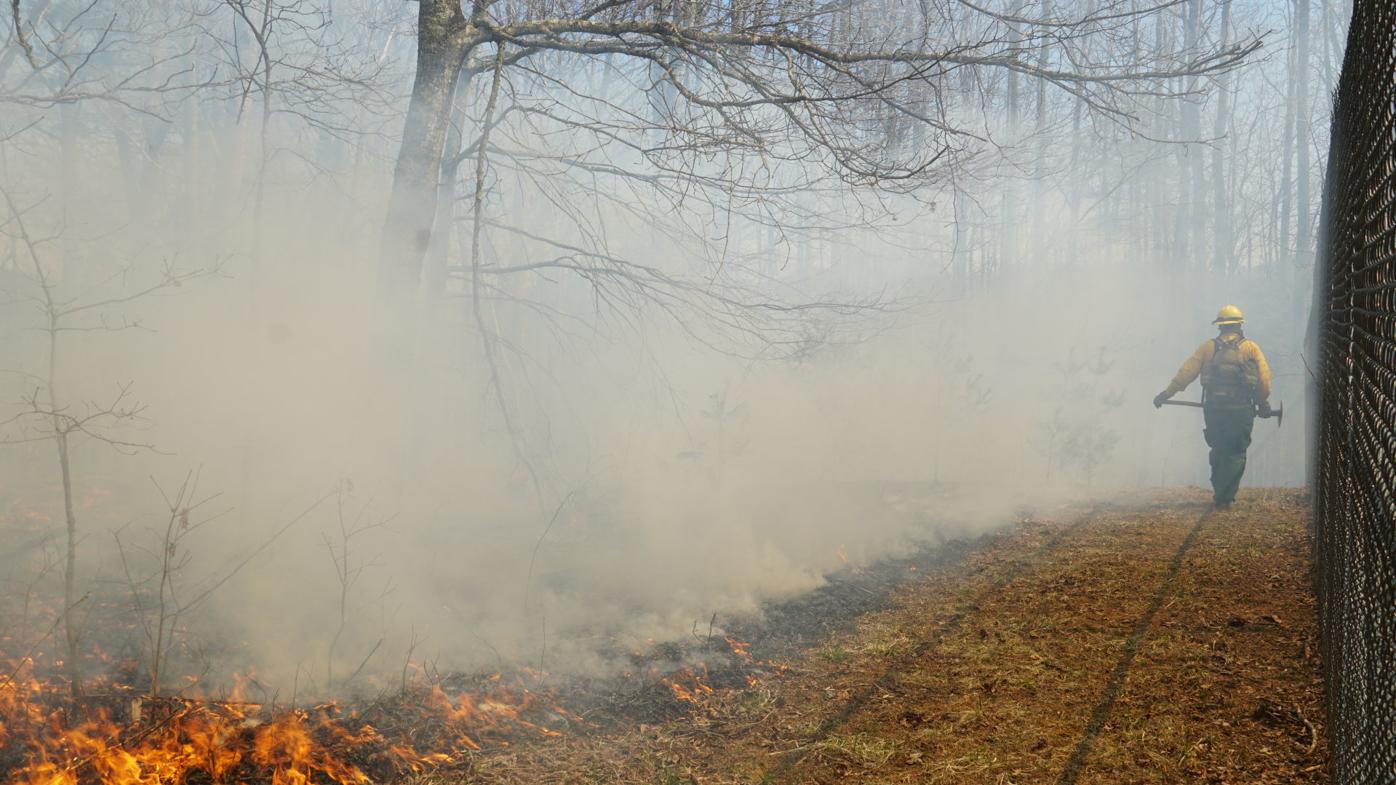 Forest Ranger Joe Shoupe reported that the Forest Service responded to 23 local wildland fire calls over the past year in conjunction with nearby volunteer fire departments.

Forest Ranger Joe Shoupe gave his annual report to the board of commissioners during the county’s bimonthly meeting on Monday, July 6.

Forest Ranger Joe Shoupe reported that the Forest Service responded to 23 local wildland fire calls over the past year in conjunction with nearby volunteer fire departments.

NEWLAND — The Avery County Board of Commissioners received its annual report from the local forest ranger as well as other important county entities during its bi-monthly meeting on Monday, July 6.

Avery County Forest Ranger Joe Shoupe gave his annual report to the commissioners in which he explained that he is not planning on retiring anytime soon.

“I know this time last year, I said I was going to retire, but circumstances changed. I break my ankle last September, and I was out of work for three months. That changed my whole perspective, so I am happy where I am. I’ll be here for a while,” Shoupe said.

Over the past year, the service responded to 23 wildland fire calls, of which nine were false alarms. While 14 fires were responded to, the Forest Service and local volunteer fire departments were able to keep the fires small and protected 29 homes and other structures valued at approximately $4,820,000.

Shoupe advised landowners and landscapers to be aware of invasive plants and insects, such as the Emerald Ash Borer and the Beech Scale insect, which causes Beech Bark Disease. Landowners and farmers should also be wary of a variety of nonnative plants, including the oriental bittersweet vine, Japanese knotweed, Russian olive shrubs and others. Shoupe said that harvesting mercantile white ash and beech timber is advisable. Additionally, many invasive species can spread rapidly and are difficult to kill, nevertheless landowners must be diligent in identify and rooting out such plants.

Avery County Humane Society Executive Director Gwynne Dyer gave an update to the board on the shelter’s operations. In the past two years, the shelter has cared for more than 1,300 animals, many of which have been stray animals brought in by local residents.

More than 1,000 animals have been adopted from the shelter over the past two years, and the shelter’s euthanasia rate qualifies it to classified as a “no-kill shelter.”

“While that is a wonderful thing, to be a no-kill shelter, there is a flipside to that, [being that] we only have so much space,” Dyer said.

The shelter typically keeps 55 cats and about 40 dogs, depending on litter size and the number of animals that can be kept together. In 2019, the shelter took in 346 stray animals and maintains a 94-percent adoption rate.

“Had we not been there to take them in, they would be wandering around the streets of Avery County. We don’t have animal control, so we’re the only [organization] for stray animals in the county,” Dyer said. “One cat that has a litter of kittens, and then those cats have litters of kittens, and that keeps going, in four years that one cat can turn into 20,736 cats.”

The shelter also provides a spay-and-neuter service, which has been in high demand since other similar services are either closed or overwhelmed. The ACHS does not turn away those who bring in animals for spay or neuter and offers a free service to those who are on welfare or food stamps.

“We’re very proud of what we’ve been doing,” Dyer said.

The county will be pursuing the Home and Community Care Block Grant once again. The grant is utilized to offset the costs for transportation for in-home aid, home-delivered meals, congregant meals and senior center operations. Senior Services Director Phillip Adams updated the commissioners on the amount of funding the county can expect.

The department is expecting to receive $129,445 in grant funding to continue meal-delivery and other services. Adams said the Senior Center does not yet have a date when it will reopen, but it will most likely open up its services before community meals are reopened for dine-in meals.

“I’m very blessed with the staff that I have,” Adams added. “They have not missed a beat.”

The board of commissioners approved the grant application unanimously before approving another motion authorizing the release of lottery funds in the amount of $350,000 to move forward with the roof renovation project at Crossnore Elementary.

County Manager Phillip Barrier gave his manager’s report to the board, in which he said there is more COVID-19-related funding coming to the county from the federal government. Barrier and Fire Marshal Paul Buchanan will have a meeting at 11 a.m. on July 8 with the Federal Emergency Management Agency to discuss the funding.

Barrier reported that the first round of funding provided through the CARES Act has been spent except for salaries, and he is collecting receipts from county departments in order to turn in the required paperwork.

“In the words of Diane Creek, this is a very mean virus,” Barrier said. “It’s not playing by any rule.”

SkyLine/SkyBest has begun construction of its Wide Area Network for Avery County Schools. The project will provide remote connections and data network access to public schools across Avery County, as well as possible opportunities for expansion of fiber in underserved areas.

“The library is opened back up, or if you go to someplace [that you can get online], go to skybest.com and if you need fiber in the community and your’s is not up to date, they would love to have your address so they can build a map of underserved areas,” Barrier said.

Barrier also said that he also going to push with the CARES Act to try to get funding for broadband expansion.

Steel beams began going up this past week at the community building construction site after materials were back ordered for some time due to steel manufacturers shutting down temporarily due to COVID-19.

Avery County Transportation received a $20,430 grant from the A.M.Y. Wellness Foundation to be used for coordinating managed care transportation. The board also approved financial adjustments to provide the $1,048,760 of the total cost of $1,598,760 for the Crossnore Elementary roof project. The remaining commitment is contingent upon the Avery County Board of Education to cover the amount of $350,000 through the use of lottery funds.

The board of commissioners will properly honor the aforementioned employees for the years of dedicated service during a future meeting after COVID-19 restrictions have been lifted.

The county received several applications for spots on various advisory boards, including Stephanie Greer for the Workforce Development Board, Todd Griffin for the Juvenile Crime Prevention Council and Jack Wiseman Jr. for the Agricultural Advisory Board. The commissioners will decide on the appointments during its next meeting on July 20.

This supercar can travel up to 1,000 miles on one tank of fuel