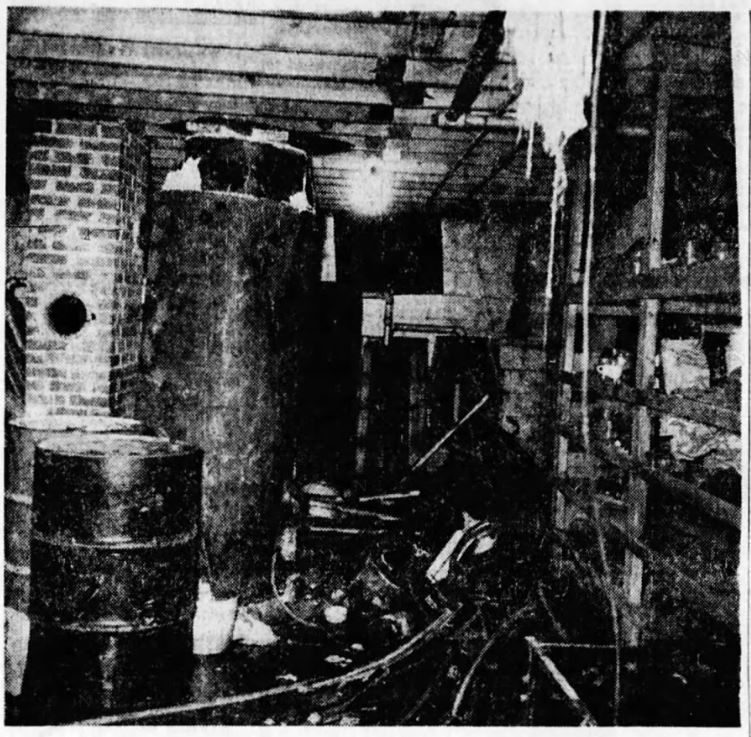 The moonshine still found by Federal agents in the home of Donald Wilson. 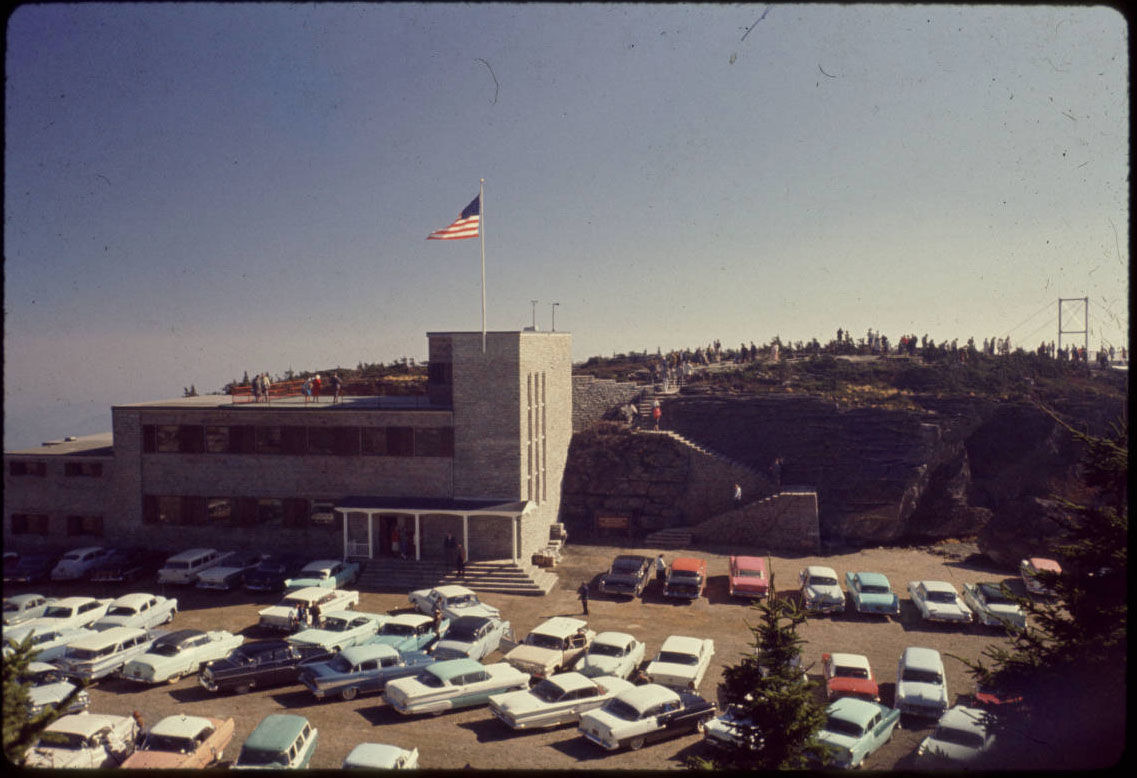 The new Top Shop on Grandfather Mountain, shortly after it opened in 1961. 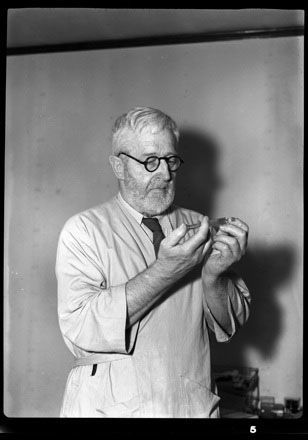 Dr. E.H. Sloop served Avery County for many years before his death in 1961.

The moonshine still found by Federal agents in the home of Donald Wilson.

The new Top Shop on Grandfather Mountain, shortly after it opened in 1961.

Dr. E.H. Sloop served Avery County for many years before his death in 1961.

Around midnight on January 3, a fire swept through the heart of the business district of Newland. “Smoke was still rising and some flames licked at the debris of almost two city blocks of this Avery County seat,” reported the Statesville Record and Landmark on Jan. 5, 1961. According to the Record and Landmark reporter, Fred Banner discovered the fire at a “restaurant kitchen adjoining a pool room, practically midway in an inverted L-shaped block. The flames spread both ways, rapidly consuming the entire block in the center of town’s main street to wipe out the two other firms, and narrowly missed the Avery County Bank and Baptist church as the conflagration consumed Smithey’s Store, a two-story structure, which ran between them.” Among the destroyed buildings were the post office, Dot and Esther’s Beauty Shop, the Scenic movie theater, an Army/Navy surplus store, Sinclair’s Pool Hall, Freeman Lovett’s radio shop, Newland Hardware and Supply, the Newland Restaurant, and several apartments.

In mid-January, the Asheville Citizen-Times reported that a large still was found in the basement of Donald Wilson’s home. The oil-fired still boasted a 300-gallon pot. Federal agents destroyed 300 gallons of whiskey and 7,900 gallons of mash. On the first of February, it was announced that Sheriff Fred Banner had busted yet another still, this one only 50 gallons. It was Banner’s 100th confiscated still since taking office six years previously.

Dr. Eustace H. Sloop passed away on February 6 at the age of 83. Sloop, born in Iredell County, had arrived in Plumtree with his new bride, Mary Martin Sloop, 53 years earlier. Soon thereafter, they relocated to Crossnore and set about building a medical practice, school, and hospital. “Sloop would dash off on horseback in sub-freezing weather to help those in need. Many a night he would return home exhausted and frozen to the saddle. He would call for his wife to come out and chip him from the stirrups.” Eustace Sloop lies buried behind Crossnore Presbyterian Church, which he helped build.

Three prisoners — Guy Carpenter, Ed Harmon and Floyd Phillip — sawed the lock off the cell door and fled down a fire escape early on the morning of June 2. By the end of the day, Carpenter had turned himself in. On June 5, Harmon came back to the jail and turned himself in.

The annual Singing on the Mountain in June drew a record 100,000 people. Among the performers were Joe Emerson, Bascomb Lamar Lunsford, and Arthur Smith. John Parris was the principal speaker.

In July, county commissioners from Avery, Mitchell and Yancey counties met in Burnsville and decided to combine the libraries in each county into a regional library system. We now call the system the AMY Regional Library.

Work was under way to build the Crossnore Fire Station at the end of July.

It was widely in announced in August that the Avery County Chamber of Commerce was working on a public 18-hole golf course. “The course would be of a caliber rarely found at an altitude of 4,000 feet, being of a rolling nature usually only found in the Piedmont,” J. Ray Braswell, president of the Avery County Chamber of Commerce, told The Avery Journal. The course was named “Mountain Glen.”

Nine young men were drafted into the armed services in August. Congress had passed the Universal Military and Training Act in 1951 to meet demands on the armed forces during the Korean War. Those called up in August were Dean Calloway of Plumtree, Bobby Stewart of Altamont, James Dearmin and John Brinkley of Elk Park; David Clark, Joe Benefield, Donald Stafford, Walter Pritchard, and Floyd Bare of Newland.

A freshnet hit Avery County on August 25. Streams overflowed their banks. Two men were injured by a slide at Brewer’s Radio and Television repair shop. Several other slides were reported on US 19-E between Cranberry and Spruce Pine.

On Grandfather Mountain, the Top Shop opened in October. Built to withstand the wind, the shop building included meeting facilities, snack bar, gift shop and restrooms. The building was demolished in 2010, and a new Top Shop was constructed.

The Rev. Kelly L. Haga passed away on November 24 at the age of 69. Born in Grayson County, Va., Haga moved to the area in 1909. Haga was one of the founding fathers of Avery County. He taught in local schools, was chairman of the Avery County Republican Party, moderator of the Avery Baptist Association, organized one of the first Boy Scout troops in Montezuma, edited Grandfather Greetings, an early newspaper, and at the time of his death, was associate editor of The Avery Journal and pastor at Sugar Mountain Baptist Church. Haga is buried in the Newland Cemetery.

In national news, President Eisenhower severed relationship with Cuba, and John F. Kennedy was sworn in as the 35th President in January; the Peace Corps was established in March, the same month that the 23rd Amendment to the U.S. Constitution was ratified; the Bay of Pigs Invasion in Cuba took place in April; Alan Shepard became the first American in space on May 5; President Kennedy announced the Apollo program before Congress on May 25; in November, Kennedy sent 18,000 military advisors to South Vietnam; and, in December, the Vietnam war officially began for the United States.