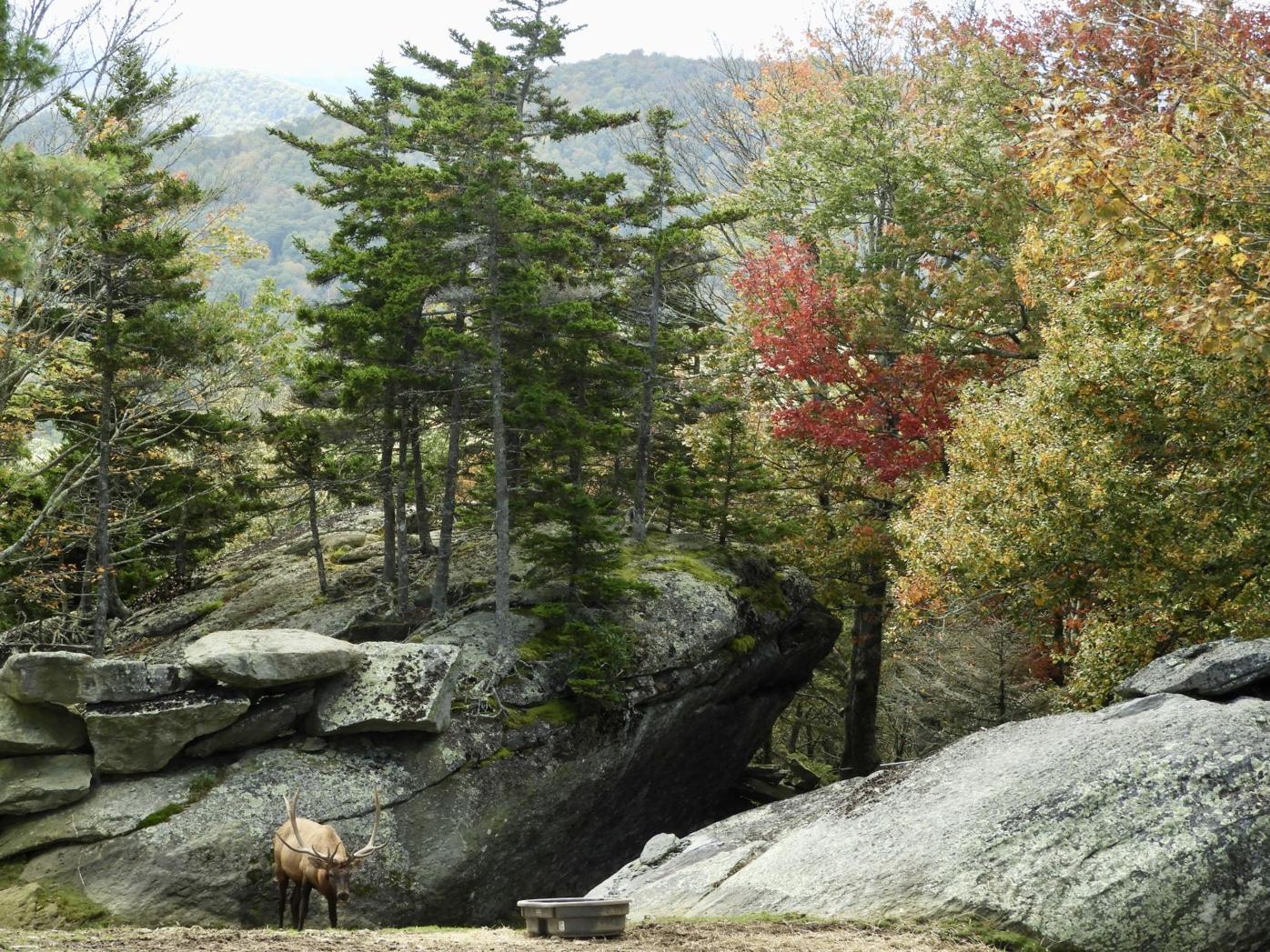 A young elk at Grandfather Mountain emerges from its slumber to stroll through its habitat. 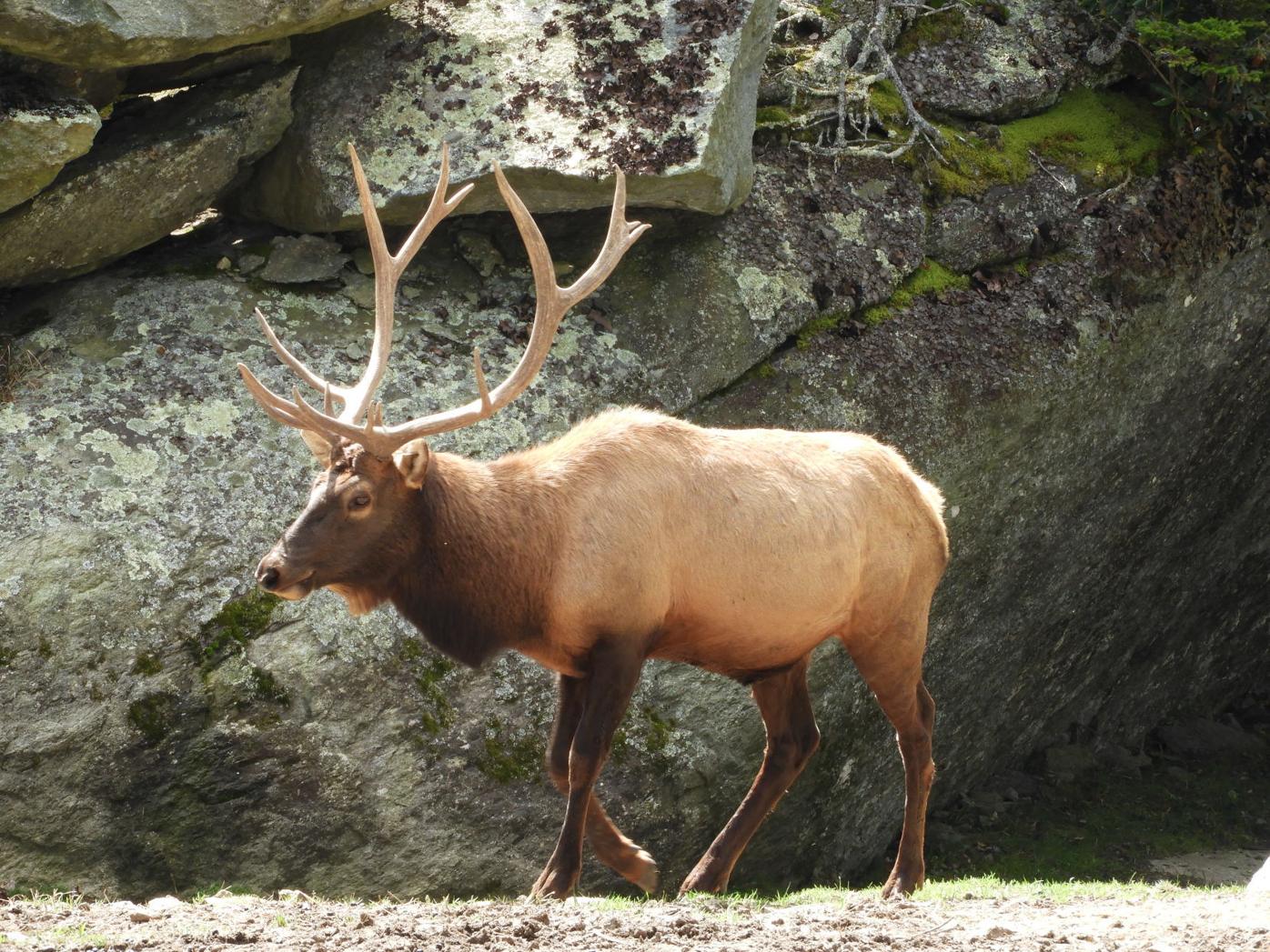 Grandfather Mountain has two elk as part of its natural habitat displays. The park has a permit, allowing for the captivity of the animal.

A young elk at Grandfather Mountain emerges from its slumber to stroll through its habitat.

Grandfather Mountain has two elk as part of its natural habitat displays. The park has a permit, allowing for the captivity of the animal.

LINVILLE — The idea of reintroducing elk in the High Country has become a popular subject for some environmentalists in the community. However, the process required to complete a reintroduction is complicated, since it would take considerable effort from the state of North Carolina before elk once again roam throughout the smoky laurels of Northwestern North Carolina.

The Appalachians’ native Eastern elk became extinct around the time of the late 18th century due to overhunting. Before European settlement, approximately 10 million elk lived in nearly all parts of the United States. Today, about one million elk live throughout the western regions of the United States and Canada, as well as Wisconsin, Michigan, Minnesota, Missouri, Pennsylvania, Arkansas, Kentucky, Tennessee and Virginia.

The second-largest member of the deer family, elk were reintroduced to Western NC in 2001 after a study conducted by the National Park Service concluded that there would be “no significant impact,” thus clearing the way for 25 elk that were captured in the Land Between the Lakes National Recreation Area in Kentucky and Tennessee to be released in the Cataloochee Valley in the Great Smoky Mountains National Park. The elk herd that roam through the national park are known as Manitoban elk, the most similar subspecies to the extinct natives.

Today, the herd of elk has grown to a size of approximately 200 and is managed by the North Carolina Wildlife Resources Commission, the state agency with the final authority regarding elk and the laws surrounding the animal. The agency’s plans, however, do not include reintroducing this herd of elk to other parts of the state. Rather, the agency’s plans are centered around growing the herd and eventually producing hunting tags in order to maintain the population, which has spread out into the Madison, Swain and Jackson county areas.

“One of the challenges that we would have (if there was a reintroduction effort) would be getting more elk. We wouldn’t use elk from captive populations because of disease, and we’re not allowed to import elk. Right now the state’s efforts are on growing the herd that we currently have,” NCWRC Biologist Justin McVey said.

Chronic wasting disease exists as one of the main diseases that affects populations of cervids, or deer, elk, moose, caribou and other subspecies of deer. CWD is a neurological disease that McVey says is always fatal and is difficult to manage, especially if elk are being transported between different herds.

“A lot of stuff about CWD is kind of fuzzy. We know that transmission can happen from animal to animal, just like any other disease. Anytime you congregate animals artificially in one place, like a captive facility, it increases your chances of passing that disease on from one animal to another. We’ve never found it in North Carolina, but our effort is to keep it that way,” McVey said.

Studies conducted by the NCWRC revealed that the Great Smoky Mountains National Park provides the most suitable habitat for elk in the state, since the large species needs expansive, undisturbed tracts of forest to roam. The agency has also surveyed Western North Carolinians about whether they would approve of elk essentially roaming through their backyards. While much of the feedback the agency received was positive, those who own larger tracts of land, such as farms, were a bit more skeptical about the possibility of herds of elk rummaging about their property.

“You got a 700-pound long-legged herbivore that needs a lot of food, and that could be competing with cattle. They have a tendency to knock down old cattle fences and things like that. There’s always some negative things about not having the proper landscape. Of course, we believe now that the positive outweigh the negatives, and that’s why we’re continuing the program,” McVey said.

The NCWRC has also purchased its own state-owned game lands that will provide more leeway for management, which will be managed for elk along with other species. McVey says that the state’s elk conservation efforts will remain concentrated around the southern region. McVey also reiterated the agency’s goal of maintaining a sustainable population within the herd’s current range.

“Right now we have a pretty large project with the University of Tennessee to get fecal DNA to get population estimates and other growth parameters. We’d like to get the numbers up and get more elk on public land. Then we can have a small hunt. I foresee a couple of years down the road providing about three or four tags,” McVey said.