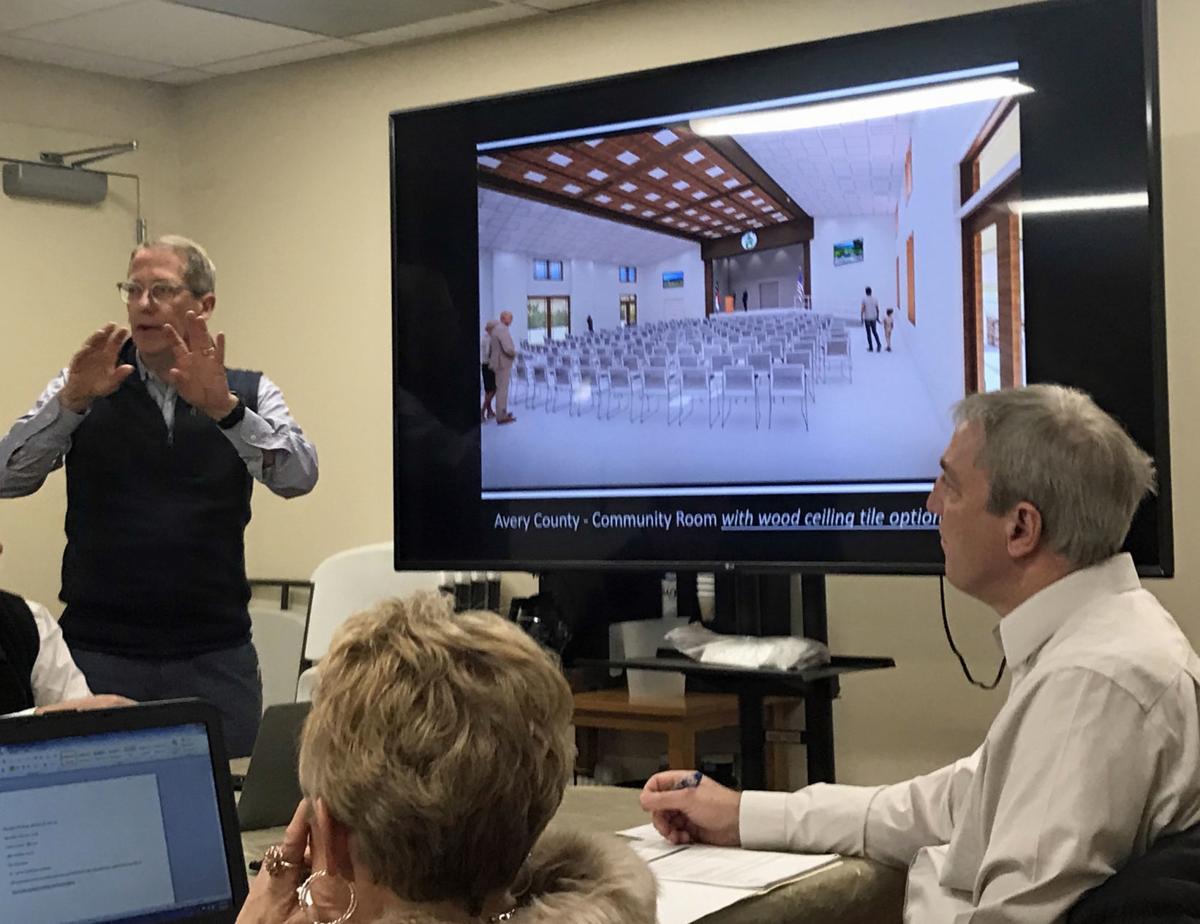 Rob Johnson with Boomerang Design discusses a portion of the layout of the proposed community building with the Avery Board of Commissioners. Pictured with Johnson is Assistant County Manager Cindy Turbyfill and Finance Officer Tim Greene. 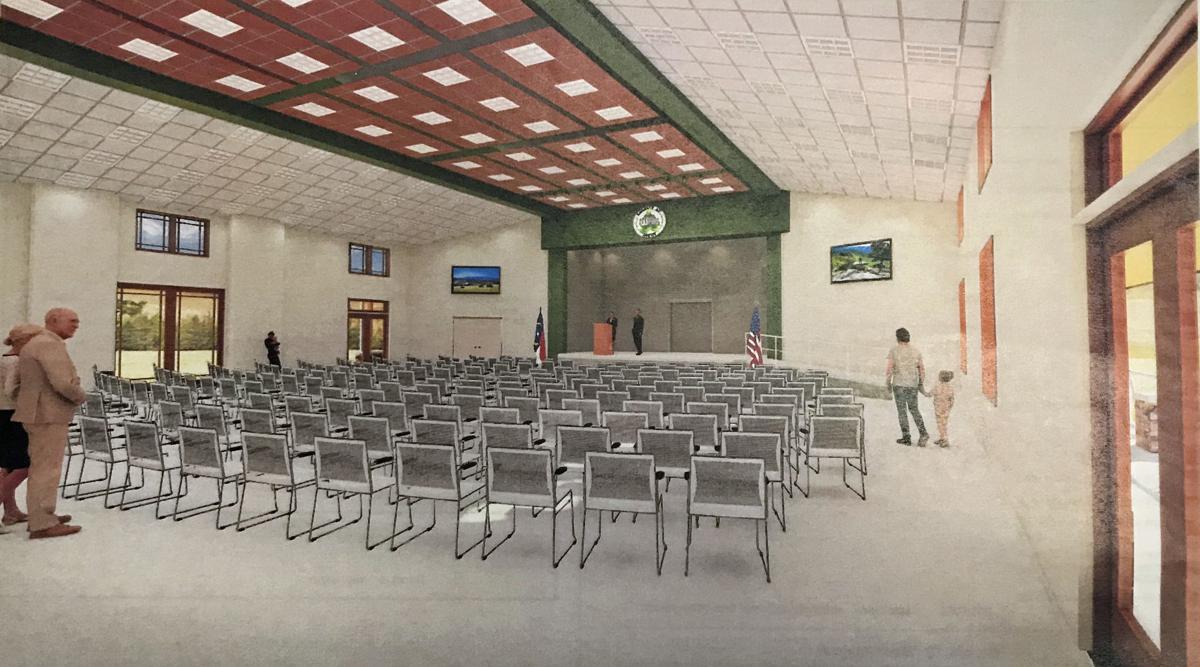 An architectural rendering by Boomerang Design of the auditorium area of the proposed community building to be constructed adjacent to the county Ag Building at Heritage Park. The rendering was the latest version that took into consideration input from county commissioners at recent meetings. 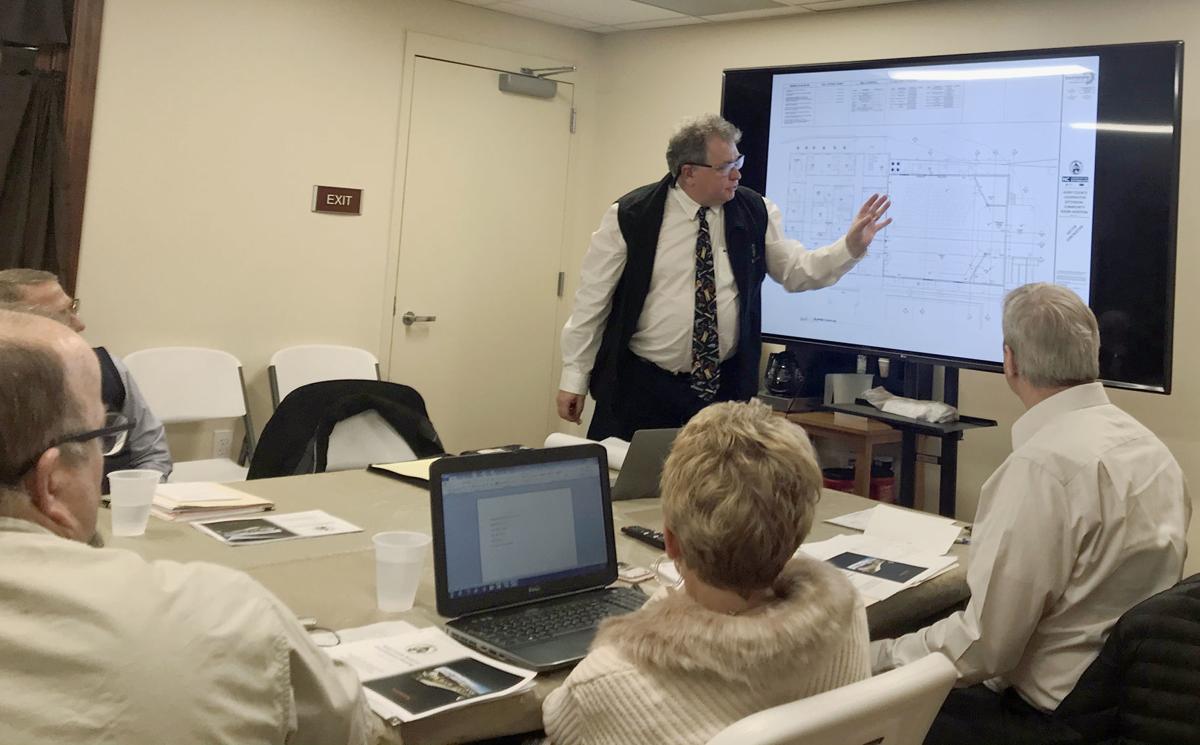 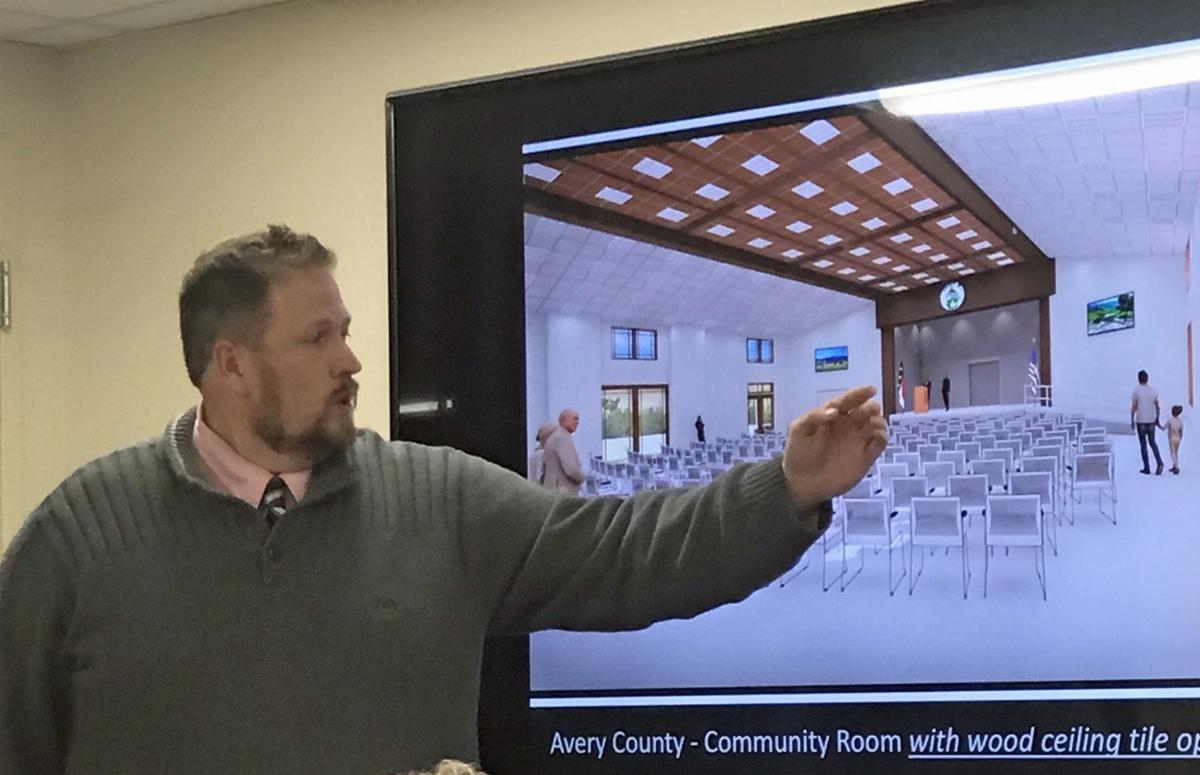 Commissioner Blake Vance shares concerns he has with the depth and design of the stage in the auditorium rendering for the proposed community building with fellow county commissioners during a special meeting with Boomerang Design on January 9.

Rob Johnson with Boomerang Design discusses a portion of the layout of the proposed community building with the Avery Board of Commissioners. Pictured with Johnson is Assistant County Manager Cindy Turbyfill and Finance Officer Tim Greene.

An architectural rendering by Boomerang Design of the auditorium area of the proposed community building to be constructed adjacent to the county Ag Building at Heritage Park. The rendering was the latest version that took into consideration input from county commissioners at recent meetings.

Commissioner Blake Vance shares concerns he has with the depth and design of the stage in the auditorium rendering for the proposed community building with fellow county commissioners during a special meeting with Boomerang Design on January 9.

NEWLAND — Avery County Commissioners gave the go-ahead to architectural firm Boomerang Design to begin the bidding process for the construction of the new community building on the campus of Heritage Park following a special meeting held at the Avery Agricultural Building on Thursday evening, Jan. 9.

The board unanimously approved the measure following a more than two-hour meeting where officials Rob Johnson and Pierre Henwood provided commissioners with rendering options for the exhibit hall/auditorium and discussed various aspects of the project, including elevation changes in relation to the placement of sewage lines, in addition to air and heating systems, general building plan specifications, storage areas and contingencies for issues including high winds and the ability for equipment to be transported into and out of the facility.

A point of debate among the commissioners was the depth of the stage that will accompany the auditorium/community room portion of the community building.

In discussing the renderings and stage plan, Commissioner Blake Vance voiced issues he had with the depth of the stage in the community room, citing concerns that the stage size would not be able to effectively and fully accommodate events that requires larger numbers of performers, such as potential school or community performances and musical concerts that would utilize the space.

“The stage is big enough. My concern is that there’s only four feet in front of the beam. I’ve been on a lot of stages, and this may look like it may be lot of room for someone with a microphone and an instrument, but it’s not,” Vance said. “We’ve not been doing anything halfway as a board, and I don’t want to halfway do this.”

Johnson noted that making a change to the stage depth would facilitate a redesign of the entire building and would temporarily delay an approval for bidding and eventual construction of the project, with additional costs involved.

“We’re spending tons of money on making a change that we don’t need to,” Commissioner Dennis Aldridge replied regarding the concerns. “That’s why we talked about having the stage extension when we need it. I don’t want to add a half million dollars where it isn’t needed.”

“This building is going to have multiple uses, and you’re not going to be able to satisfy every use and everything coming or going for this building,” Commissioner Tim Phillips added. “I understand where Blake is coming from, but we’ve got to remember that it isn’t going to satisfy every situation you come to, that we’re going to have to make do with some of the situations that come up.”

Following a recess, the meeting reconvened with Johnson and Henwood describing the ceiling of the auditorium/main hall/community room, including wood veneer on spacing between the wood-toned, tiled ceiling which would include slots to assist in absorbing sound in the room. The building will also include an outdoor stage that will be utilized for events on site.

The primary cost for the facility construction according to documentation provided at the meeting equated to approximately $1.05 million, an increase of more than $50,000 from the quoted cost from recent meetings due to the addition of the outdoor stage being included in the bid rather than considered an alternate.

The cost estimate also does not include non-construction expenses, including architectural, civil, structural and acoustical costs, as well as the costs to be procured separately for furniture, acoustical panels and sound/audiovisual equipment, bringing the potential total price tag to $1.315 million.

Commissioners have previously budgeted $1.2 million for funding of the project, and moved for Boomerang to commence the bidding process for the community building, with the editions of including the outdoor stage in the bid, as well as changes to the thermal controls and crown molding in the community room and configuration of community room lighting.

Boomerang Design reported a timeline that with approval, the architects will meet with County Building Inspector Tommy Burleson for review during the week of January 20, with the project going out for bids beginning February 3, with bid opening to take place on March 5. The awarding of the project to a contractor would take place at a subsequent commissioners’ meeting, with scheduled construction taking place from April to August of this year.

The next scheduled regular meeting of the Avery County Commissioners will take place on Monday, Feb. 3, at the county administrative building in Newland.

Mom dies of Covid-19, now kids figure out how to stay together