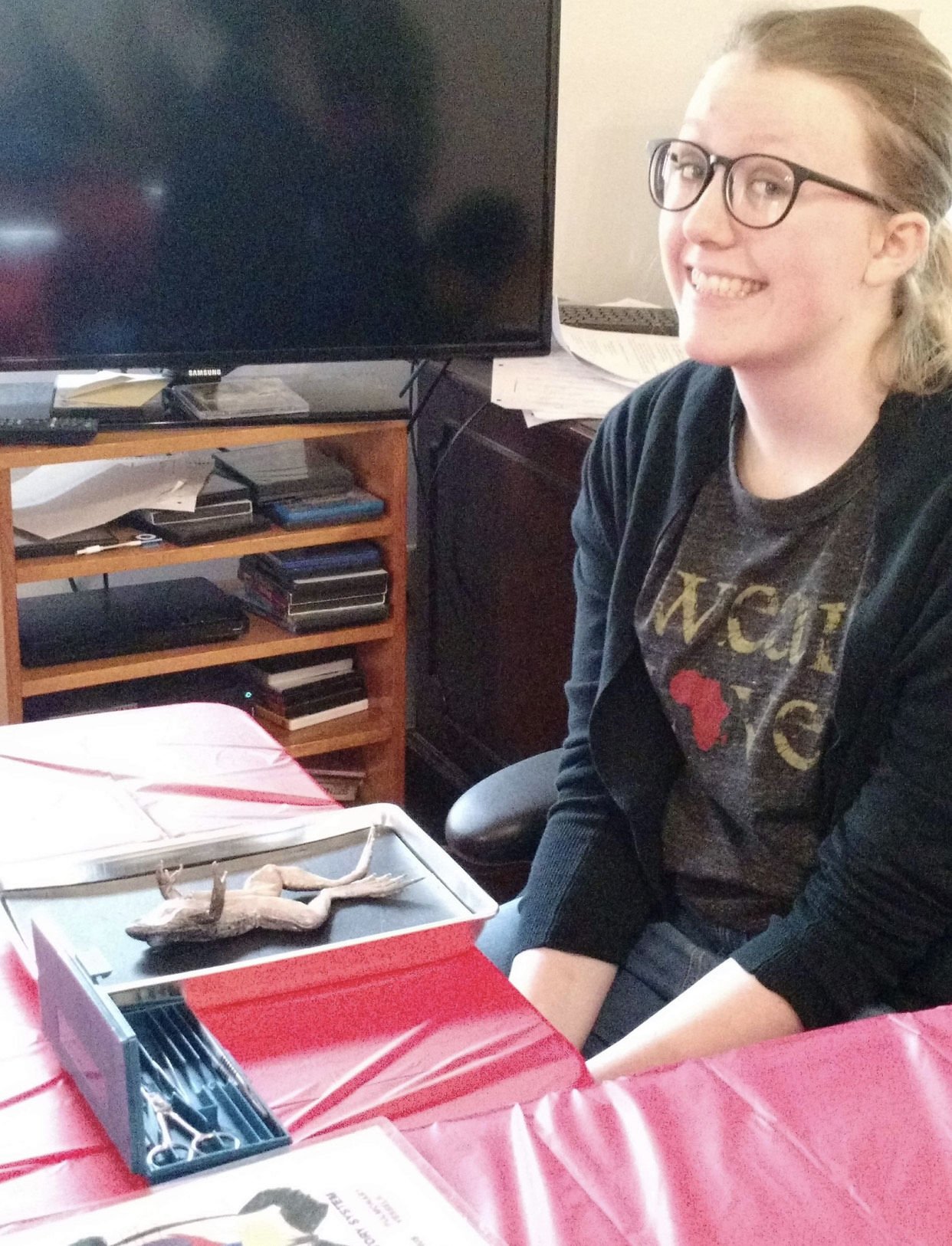 Jillian Young prepares to dissect a frog during a homeschooling session. 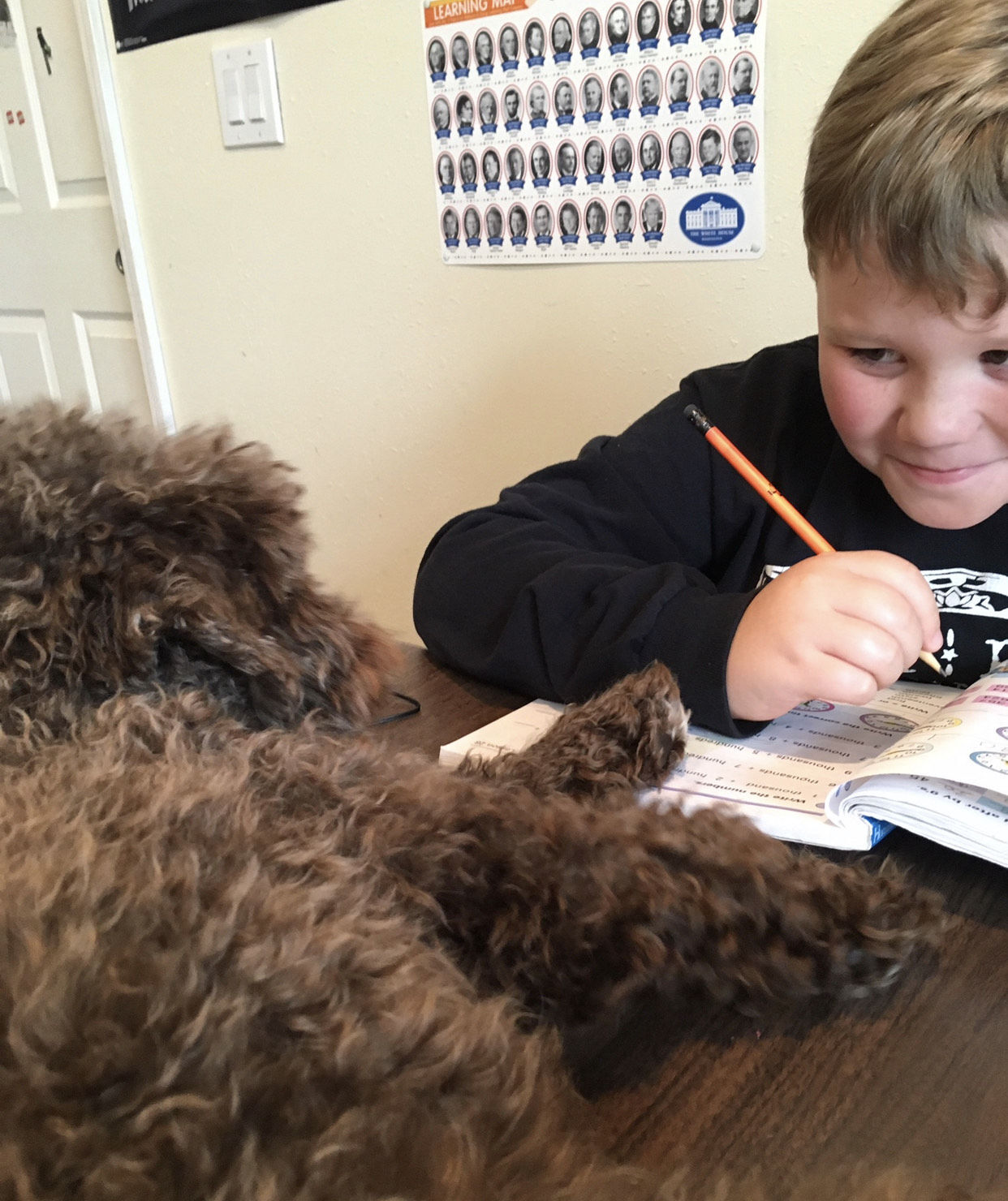 Judah Young receives help from a furry study buddy during a homeschooling session.

Jillian Young prepares to dissect a frog during a homeschooling session.

Judah Young receives help from a furry study buddy during a homeschooling session.

NEWLAND — A RealClear Opinion Research survey conducted in May revealed that 40 percent of parents across the nation were more likely to pursue homeschooling or virtual learning opportunities after the lockdowns ended, according to the American Federation for Children.

In August, this sentiment is beginning to bear fruit as homeschooling, a long-touted educational alternative by school choice advocates, is becoming an increasingly viable option for families who do not want to send their children back to school while COVID-19 continues to spread.

Lorah Young, a local parent who homeschools her children and is a board member of the local chapter of the Heritage Homeschoolers, says that she has personally seen an increased interest in the homeschooling program in the region after an additional 15 people attended an interest meeting organized by local homeschooling families.

“There have been several families that have reached out,” Young said. “We hosted a meeting for anyone interested or who wanted to know where to start, what to do with the state and with the school they’re involved in. We talked a little bit about curriculum and different styles or methods of homeschooling.”

In Avery County, 223 homeschools were registered with the state of North Carolina, with an estimated enrollment of 339 for the 2019-2020 school year, according to the NC Department of Administration. Expectedly, the number of homeschooled students is significantly smaller than the 1,998 students enrolled in the Avery County Schools system as of the 2018-2019 school year, according to the National Center for Education Statistics. However, the number of enrolled homeschool students has increased by 103 since 2015, while the number of students enrolled in ACS has decreased in recent years.

Young graduated her daughter from their homeschooling program, and her son recently moved into the sixth grade. A homeschooling parent for the past 10 years, Young said that she started homeschooling so she could invest more in her children after she and her husband worked as cottage parents at Williams Academy.

“After all that time we invested in these other children, we really wanted to take at least a year to invest in our children. That’s why we chose to homeschool initially, then a lot more reasons came later. We saw the benefits of a family being connected and a love that was fostered through homeschooling,” Young said.

Additionally, Young said that families are able to individualize their curriculum based on child needs and child interest. For example, Young’s son is dyslexic, and homeschooling allows them to have access to personalized tutoring, which they receive three times a week from another homeschooling mom.

Moreover, homeschool families have access to various curricula. Young’s family uses the “Tapestry of Grace” homeschool curriculum, which includes church history as well as a history of important missionary figures. For other subjects, such as math, the family also chooses from amongst a set of available courses and curriculum until they find the one that best suits their needs.

In regard to standardized testing, homeschooling also offers an advantage in this area as well, since families can choose among standardized tests from different states in order to gauge whether or not their child is performing academically at the appropriate grade level. As for high school curriculum, Young said that these courses are typically on par or exceed what a student would receive in the pubic school system.

Young noted that some local homeschooling groups have programs that focus on preparing for tests such as the Scholastic Assessment Test (SAT), and these tests can be used for juniors and seniors in place of end-of-year testing.

“(Testing options are available such as) Ohio state testing, the California Achievement Test and different ones that you can order and do yourself, but I do it through an instructor that’s certified through North Carolina,” Young said.

Like any other decisions to be made about education, there are trade-offs to consider. According to the Coalition for Responsible Home Education, homeschooled students tend to score better in language-based aptitude tests while public and private school students tend to score better in math-related subjects due to a wider availability of math teachers in these institutions.

Additionally, homeschooling families tend to rely on one source of income, since educating their children takes a significant amount of time and effort.

Another form of homeschooling will taking place this semester as a number of families will be enrolling in the Avery Virtual Academy. Enrollment closes on Wednesday, August 5. However, many parents are finding that the options they have available to them have their trade-offs.

Emily Wilson, a Watauga County parent, said wrestling with the decision of whether or not to send her 15-year-old daughter back to Watauga High School for the fall has been the very definition of a dilemma. Wilson said she feels like there are still so many questions that are unanswered that she can’t make a firm decision yet, questions such as how teachers will be protected in the schools and what happens if those in the school need to quarantine.

“It’s such a complex situation that there really are no good choices,” Wilson said. “It’s not going to be possible for everyone to get the scenario that they’re most comfortable with. That’s the reality of the pandemic.”

Catharine Milner said she too feels that there isn’t a solution that is not stressful. She has a 7-year-old son with Autism who attends Hardin Park, and said most of the goals in his individual education plan are for his social wellbeing. She’s unsure how he’ll get the same social experiences while learning from home.

Milner mentioned how many parents were apprehensive about sending their children to school because of the mandated mask wearing by all K-12 students and all school personnel. She’s been trying to practice wearing a mask with her son, but said after a while he wants to touch the mask and play with it. Her son also enjoyed remote learning as he enjoyed the quiet while being at home.

Working from home while also trying to help a child learn from home can be difficult, Milner said. She added that sometimes remote learning could be frustrating because Zoom calls could be at inconvenient times, and parents tend to need to be with the younger children while using Zoom with their teachers. Milner works as a preschool director and also has a 3-year-old.

“There were times that I was on a phone call for work, and trying to get him to read out loud to his teacher on the computer,” Milner said.

While her son’s teachers were “phenomenal” last school year, Milner said homeschooling would offer the ability for her family to go at their own pace and do school work during times that were best for them. While she still was leaning toward sending her son for in-person learning at school, Milner said she was going to wait at least a few weeks to make a final decision after seeing what other families were choosing — at that time she was going to trust her intuition.

Additionally, the department requires that families follow the legal requirements to operate a home school, notify the Division of Non-Public Education at any time if the homeschool address or enrollment changes and to respond to communications from the division in a timely manner to confirm continued operations.

Keira Knightley forgets who she played in 'Star Wars'