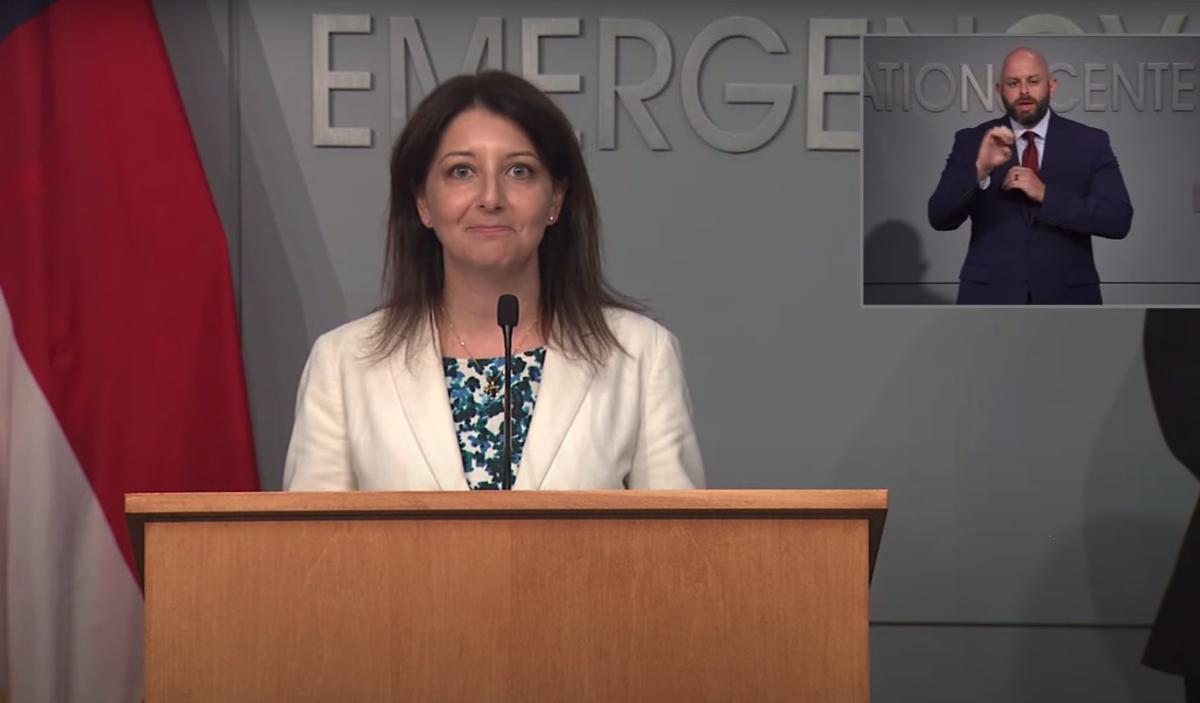 NC Department of Health and Human Services Secretary Dr. Mandy Cohen speaks during a Monday, June 22, media briefing at the NC Emergency Operations Center in Raleigh. Cohen and health officials continue to express concern over increases in recent days of cases and hospitalizations in the state due to the coronavirus, and a decision on phase movement from Gov. Roy Cooper is scheduled to be announced this week.

NC Department of Health and Human Services Secretary Dr. Mandy Cohen speaks during a Monday, June 22, media briefing at the NC Emergency Operations Center in Raleigh. Cohen and health officials continue to express concern over increases in recent days of cases and hospitalizations in the state due to the coronavirus, and a decision on phase movement from Gov. Roy Cooper is scheduled to be announced this week.

RALEIGH — Governor Roy Cooper has not announced a decision regarding whether a number of businesses closed due to COVID-19 will be allowed to reopen as of press time, but has indicated that a decision will be announced within the week.

Under Cooper’s current executive order, restaurants can offer dine-in seating, and barber shops and hair and nail salons are open, but all at reduced capacity. Bars, movie theaters, bowling alleys and gyms remain closed, and Cooper has to decide whether to extend the order, which expires June 26, or modify it in some way.

During a recent media briefing, the governor said the decision will be based on science and data. He said he remained concerned by the continued uptick in cases and hospitalizations. Overall, the number of positive COVID-19 cases have exceeded 53,000 according to state health data. More than 1,220 virus patients have died since the pandemic began and almost 870 people are currently hospitalized as of June 23.

“Right now, they’re not trending in a good direction, but we still want to give this more time,” Cooper said.

“The face covering really shows its effectiveness when many, many folks are doing that altogether,” Cohen said. Cohen and Cooper each also continue emphasizing the utilizing of the 3 W’s: wear a mask, wait six feet apart, and wash your hands frequently throughout the day and particularly when you’ve been in contact with items of concern as the best defense for containing the spread of COVID-19. Cohen said the state can still flatten the curve if it takes steps collectively.

As of Tuesday morning, June 23, North Carolina health officials report there have been a total of 53,605 lab-confirmed cases of the coronavirus in the state, according to statistics posted from NCDHHS. The state also has reported 1,220 virus-related deaths.

The Raleigh News & Observer newspaper reported that 1,223 individuals have died from the virus, with 53,605 cases statewide as of Tuesday morning, June 23.

A total of 757,345 tests had been completed by the N.C. State Laboratory of Public Health and reporting hospitals and commercial labs as of Tuesday morning, June 23, according to N.C. DHHS. The estimate of people who have recovered from the virus as of June 22 is 36,921, with the estimate provided each Monday by NCDHHS. NCDHHS estimates a median time to recovery of 14 days from the date of specimen collection for non-fatal COVID-19 cases who were not hospitalized, or if hospitalization status is unknown. The estimated median recovery time is 28 days from the date of specimen collection for hospitalized non-fatal COVID-19 cases.

“North Carolina is experiencing significant community spread of the COVID19 virus, and many of our metrics are headed in the wrong direction, with increased ER visits, hospitalizations increasing, and the percentage of positive tests is also high, at 10 percent,” a social media post from the Avery County Health Department on Monday, June 22 stated.

The health department also reiterated the impact of the virus upon local minority communities.

“COVID19 is hitting NC’s Hispanic/Latinx population hard. Many work in essential services and industries that our state relies upon like construction, child care, and food processing, and may not be financially able to stay home when they are sick,” the post noted.

Toe River Health District reported on Monday, June 22, that Avery County has a total of 10 positive cases, with five active and five having recovered. The department added that a total of 1,002 people had been tested in Avery County, with 949 negative results and 43 pending results. The health department conducted a pair of drive-through testing events earlier this month, one on June 9 and another on June 11.

In Tennessee, Johnson County reports 26 cases, while Carter County reports 30 cases and one death as of June 23, according to statistics from the Tennessee Department of Health.

Statewide, Mecklenburg County has reported the most cases with 9,086. Wake County is reporting 4,106 cases and Durham County reports 3,244 cases, according to June 23 NCDHHS statistics.

Austin Mayor: ICUs will be overrun in 10 days