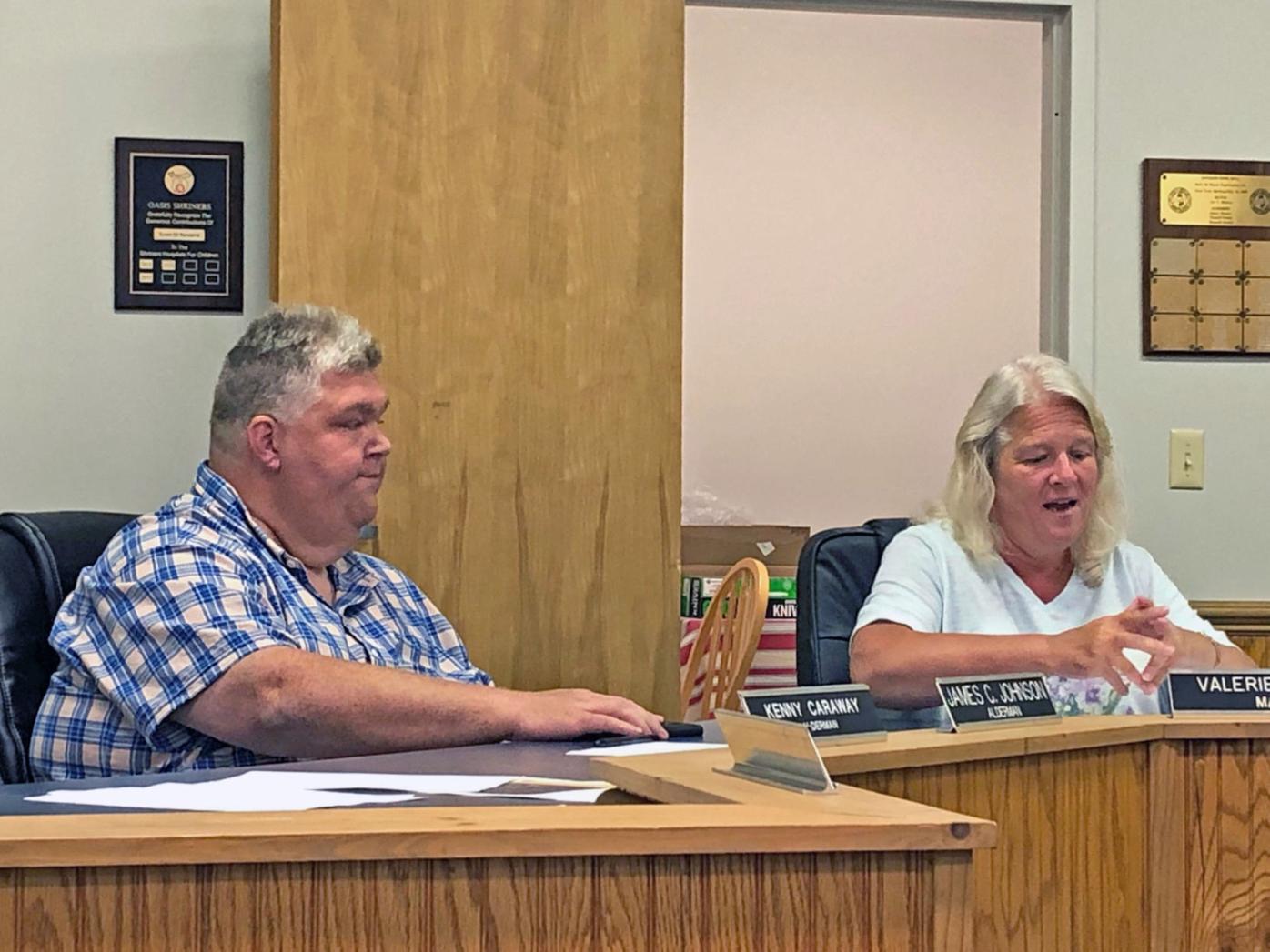 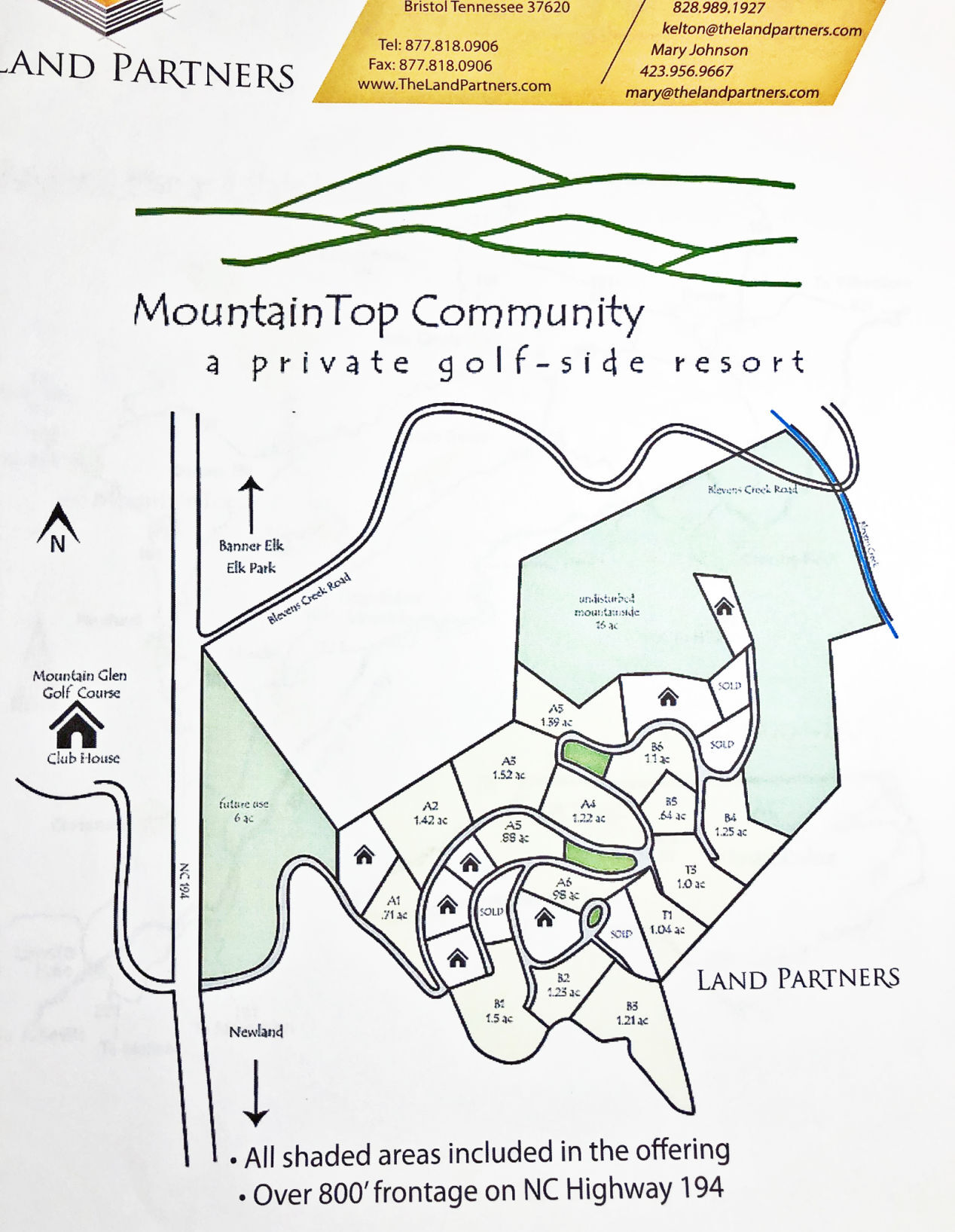 Land Partners is looking to build a mixed-use development on a six-acre lot next to NC 194 if the town of Newland is able to go through with a satellite annexation of the MountainTop Community.

Land Partners is looking to build a mixed-use development on a six-acre lot next to NC 194 if the town of Newland is able to go through with a satellite annexation of the MountainTop Community.

NEWLAND — The Town of Newland Board of Alderman reconvened for its monthly meeting on Tuesday, July 6, in which a developer approached the alderman with plans for a new multi-use development project in the Mountain Glen Golf Course area. Other business included the old Lowes Foods property, a potential dog park and the new O’Reilly Auto Parts.

Real Estate Broker Greg Greene began the evening’s public comments section with an update on the old Lowes Foods property. Greene said that Wooten Real Estate, the owner of the property, has been working on patching up the parking lot, as well as leaks in the roof, and said the agency would be interested in selling the property to the town at a discount.

“I want it to be known that we would offer it to you, the town. The whole property is about seven acres, and we’re asking about a million and a half for the place. We would be willing to agree to donate about half of that and accept about half of that. Maybe we could make financing work. I’m not expecting y’all to say yes. It’s a little up in the air, but I thought we would try,” Greene said.

Greene added that there have been various parties interested in the property, and that the consensus around town is that there is a need for another grocery store. Specifically, Greene mentioned that Fair Value, a small grocery chain based in Lenoir, has continued to show interest.

“By the way, Newland is the biggest sleeper in the mountains. I believe in it wholly,” Greene said before leaving the meeting.

Community staple Ruth Shirley then addressed the alderman with a proposal aimed at the animal lovers in attendance. Shirley, who takes her dog to the dog park at the Banner Elk Tate-Evans Town Park on a weekly basis, floated the idea of taking some green space around the Newland Riverwalk and creating a dog park in town.

“Jamey (aldermen Johnson) is fortunate and has some space for his dogs to roam, but I don’t have that, and lots of people that walk their dogs with me there at night, they don’t have that. I just wanted to ask if there’s any way we could do that in those green spaces. It doesn’t have to be huge, and I know that the people who walk their dogs out there would appreciate it,” Shirley said.

The aldermen responded to the request positively. Shirley mentioned the area near the veterinarian’s office as a potential location, or near the Church of Jesus Christ. Public Works Supervisor Colby Benfield said the project would be doable.

“We have plenty of property,” Benfield said. “That wouldn’t be an issue whatsoever. The town owns 12 acres right there across from the vet’s office. We can’t put anything permanent, but with a fence, there’s no restrictions on that whatsoever.”

Alderman Johnson said it was a “great idea” and thought a dog park would bring people to town. Dave Calvert seconded Johnson’s sentiment, but brought up the possibility of liability concerns for the town.

MountainTop Community is a 40-acre development with 26 building sites that includes underground electric and phone cables, interior roads and landscaping. The development overlooks the Mountain Glen Golf Course and includes 22 undeveloped acres that could potentially be developed into commercial or residential properties.

There are also seven existing homes in the MountainTop Community that are owned by private individuals and not Land Partners. According to Town Attorney Joe Seegers, the seven home owners would need to agree to the satellite annexation or the town would have do an involuntary annexation, which Seegers said would be “cost prohibitive.”

Mary Johnson said that a six-acre lot next to NC 194 could be potentially developed into a “branded lodge” to bring in tourists to play at the golf course or ski in the mountains. Other ideas from Land Partners also include a sit-down restaurant or a set of shops. Johnson added that “affordable housing” units could also be developed on this tract of land, which rests below the retirement community above.

“Newland has a character that some of the other surrounding communities have lost. If you have a strip like that where people are use to going up and down, you could put some of the commercial stuff up and down that strip and save the town center from compromise. I’ve seen it a zillion times, once it’s gone it’s gone. It also opens up that corridor too for future growth and sales tax revenue,” Johnson said.

The aldermen suppressed its support for the annexation and possibility of future projects. Benfield said that an engineer has not yet come to figure out the cost of the annexation, which would provide the community with town sewer and water services, but the ballpark estimate he was given by the engineers he talked with was around $1 million, which could involve laying down 1.5 to three miles of infrastructure.

Alderman Johnson said that there are grants for water and sewer expansion available, along with potential help from the state legislature. County Manager Phillip Barrier, who was in attendance, expressed his support for the project.

“We met with these fine folks 18 months ago, then COVID hit and they called me back. I know it’s going to be costly. It’s a big risk. It’s an investment, but it’s an investment in the future. I just see everything growing that way if water and sewer was available,” Barrier said.

The board then entered into its regular business, beginning with Police Chief Byron Clawson, who presented the monthly police report. Notable calls for the Newland Police Department included seven motor vehicle accidents, five drug information complaints, one domestic situation, one death investigation, one animal complaint (a seven-year old child was bitten and taken to the hospital) and one breaking and entering of a motor vehicle.

The police department also obtained a search warrant and served it on Bird Street, although the items sought were not found. Clawson said it was a “busy month.”

Benfield then gave the Public Works Department report, in which he stated that the opening of the O’Reilly Auto Parts is planned for sometime in August. The water and sewer department also had a pump malfunction, which will cost about $15,000 to replace since the part that needed to be replaced is no longer manufactured. Benfield said that insurance should cover the cost.

In other town business, the board approved a motion to move forward with a grant request from the National Association of Realtors that would provide $5,000 to do a downtown technical assessment, which would research ways to improve the downtown area.

Major Valerie Jaynes updated the alderman on the search for a new town manager. Jaynes expressed interest in reaching out to Richard Hicks, former town manager of Farmville, NC, who also worked for the Town of Marion, and has a master’s degree from Appalachian State University. Hicks had contacted the League of Municipalities to inquire about any interim jobs that were available.

The town is also looking for funding through the American Rescue Plan, which could provide $200,000 to potentially be used for the annexation project.

As the last order of business, the board passed a motion to appoint Shelby Taylor as interim finance officer.