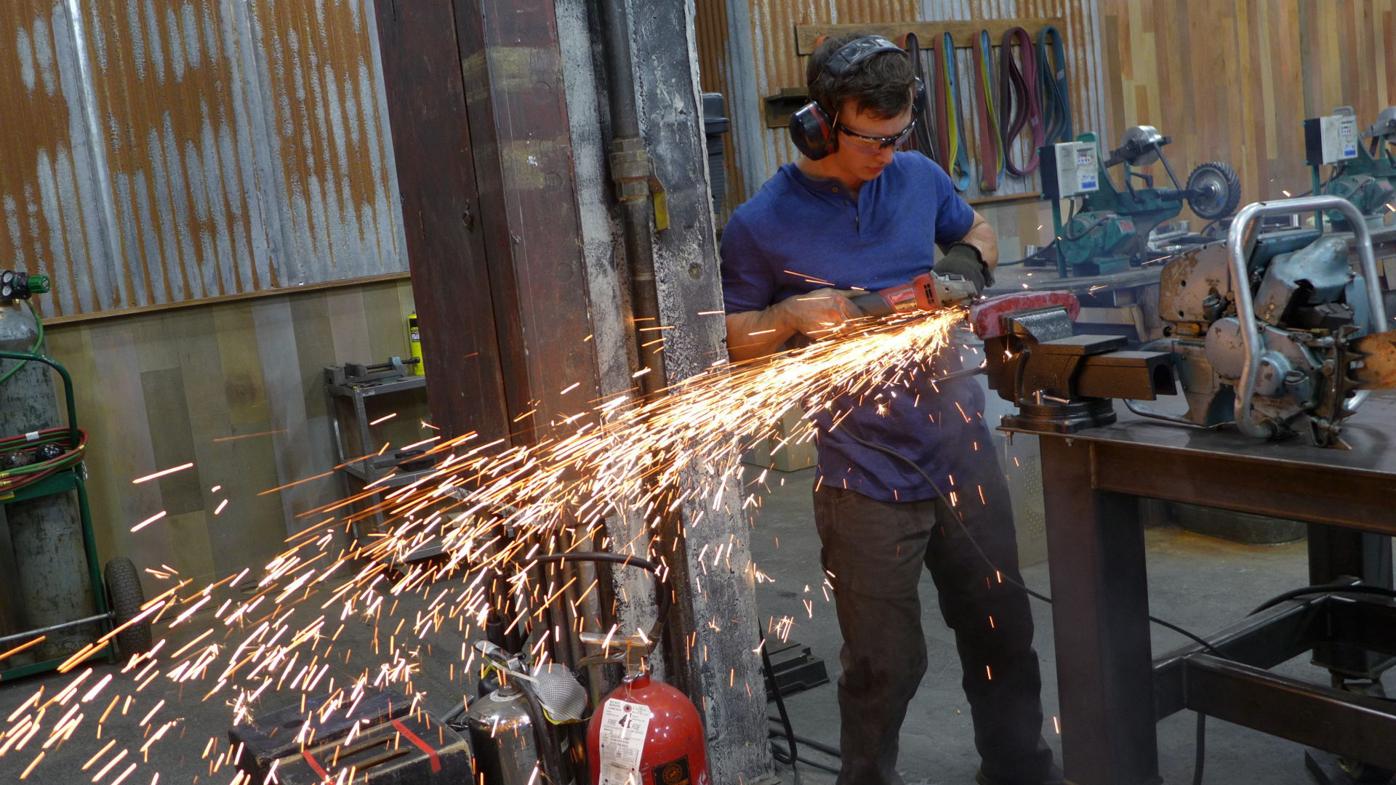 Local blacksmith Liam Hoffman operates a grinder in the “Forged in Fire” studio in Brooklyn. Hoffman bested three other contestants, including a master bladesmith, to recently take home a $10,000 grand prize. 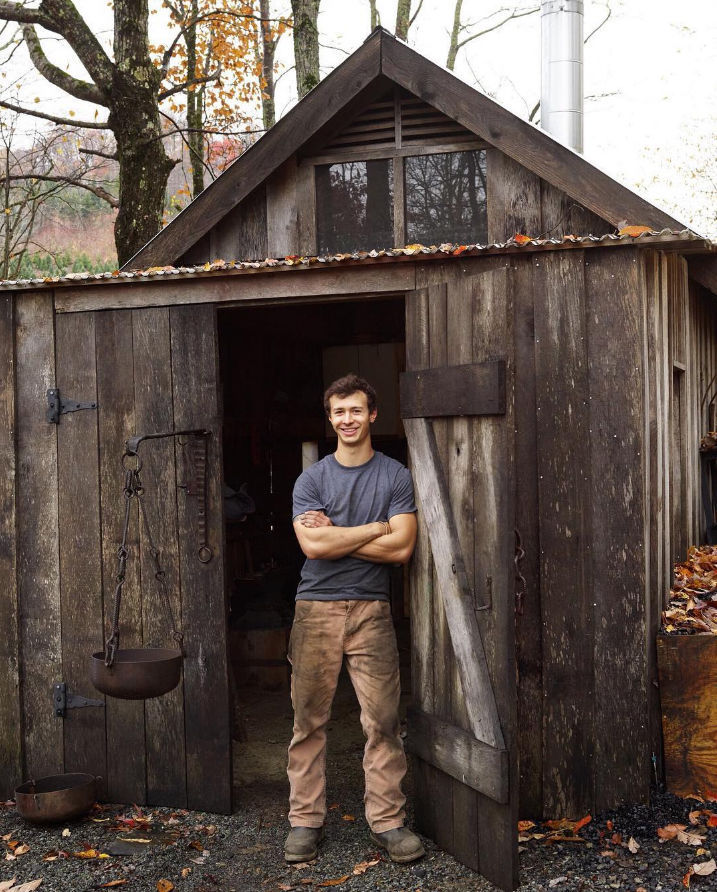 Liam Hoffman outside of his shop in Newland. Hoffman hopes to use part of his winnings in the construction of a new workshop and apartment in Bethel. 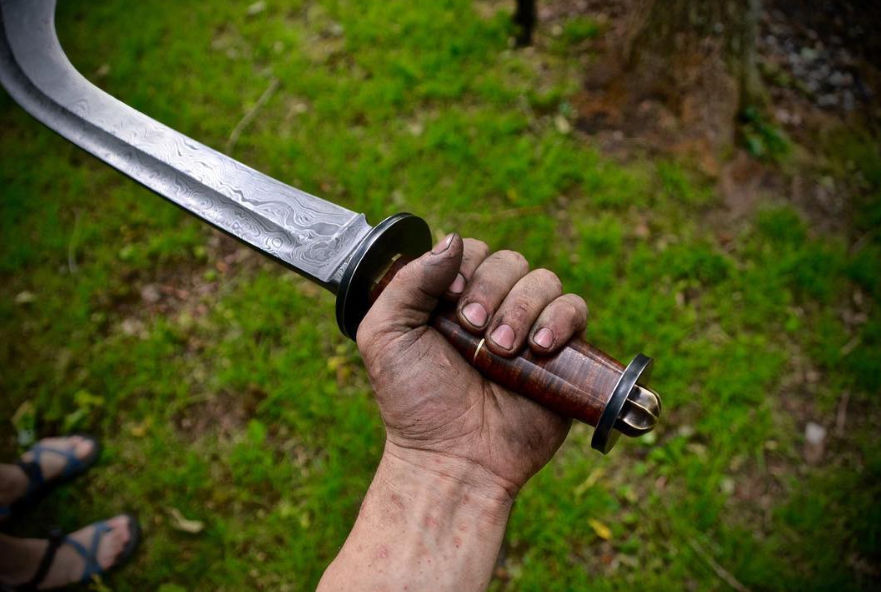 Hoffman displays of the meticulous craftsmanship which went into the forging of the Kora sword. His weapon was also judged on the basis of historical accuracy.

Local blacksmith Liam Hoffman operates a grinder in the “Forged in Fire” studio in Brooklyn. Hoffman bested three other contestants, including a master bladesmith, to recently take home a $10,000 grand prize.

Liam Hoffman outside of his shop in Newland. Hoffman hopes to use part of his winnings in the construction of a new workshop and apartment in Bethel.

Hoffman displays of the meticulous craftsmanship which went into the forging of the Kora sword. His weapon was also judged on the basis of historical accuracy.

NEWLAND — A traditional weapon amongst the Gurkha people of Western Nepal, Kora swords have a long history of use in both ceremony and battle. Whether cutting through the flesh of a ritual sacrifice or slashing at a foe on the battlefield, the Kora sword’s heavy, curved blade is made to deliver powerful chops capable of cutting through the toughest of materials.

This was the fearsome weapon that local blacksmith and Avery County native Liam Hoffman recently forged to earn first place and a $10,000 prize on a recently aired episode of the History Channel’s “Forged in Fire” series. Traveling to the show’s studio in Brooklyn, Hoffman squared off against three other metalsmiths from across the country, surviving three rounds of elimination to be named the episode’s champion.

“The Kora sword is a Nepalese sword that was used for both ceremony and battle,” Hoffman said. “I believe it was more typically used in ceremonies for sacrificing animals, particularly sheep. It’s historically a very heavy sword, almost like a combination between an axe and a sword. It’s made to chop and be forward-heavy on the downswing, so the bend of the Kora sword is wider than where the blade starts, which is opposite of most knives. This puts more weight in the front, which makes it chop better.”

As to how he ended up on the program, Hoffman told The AJT that a member of the “Forged in Fire” production team contacted him through a vendor who carries his wares. While he was initially reluctant to go on the show, friends encouraged him to take the opportunity and Hoffman eventually agreed.

When the time arrived, Hoffman boarded a plane for New York and spent nearly a week on location at the “Forged in Fire” workshop. For nearly 12 hours each day, Hoffman and his fellow contestants were busy with filming on the set of “Forged in Fire.”

After enduring two rounds of elimination, Hoffman had the opportunity to return to his forge in Newland to make the final product. For five days, he labored on his Kora sword, striving it imbue his creation with both craftsmanship and historical accuracy. Upon returning to New York, his blade was judged against the work of Josh Smith, a master bladesmith from Montana.

“My competition was much older than me and most of them had a lot more experience than me,” Hoffman said. “It never really intimidated me much.”

When the smoke cleared, Hoffman was proclaimed the episode’s champion, walking away with a cool $10,000 cash prize, which he hopes to utilize for establishing a new workshop and living space in Bethel.

“It might pay for the well,” Hoffman said with a laugh. “My current shop is in Newland, and about four or five months ago I bought 10 acres in Bethel, so I’m building a shop and an apartment on that land next summer.”

For Hoffman, a 2014 graduate of Avery County High School, blacksmithing has been a calling since he was 13 years old. At 14, his parents built him a small forge. His father then proceeded to build him a 200-square-foot workshop in Newland. Of all of his family, Hoffman is the first to ever have any affinity for smithing.

“I was just bored one weekend and started doing it,” Hoffman said. “It took off from there. I can’t remember anything really specific that made me want to start it, whereas most people see a blacksmith demonstration and that gives them the idea to try it.”

In the past seven years, his metalwork has evolved into something far more than a hobby. As Hoffman’s talents developed, he began selling his wares to friends, teachers and classmates. Today, he operates a website, www.hoffmanblacksmithing.com, where he sells his items to a much broader audience.

Of all the items Hoffman makes, most are tools that serve a practical purpose. Knives, axes and hammers make up the majority of his wares. Hoffman said he enjoys the process of creating bladed items and hopes to pursue the title of master smith in the future.

“When I was in high school, I was working full-time for myself, making money and doing things that none of the other kids were doing, blacksmithing at 17 or 18 years old,” Hoffman explained. “You’re this weird kid making knives after school, so no one ever really took that seriously. I just try to let people realize that you can make whatever you want to do come true.”

Pandemic to Endemic: Is a New Normal Near?

Almost 1 in 10 U.S. Lung Transplants Now Due to COVID