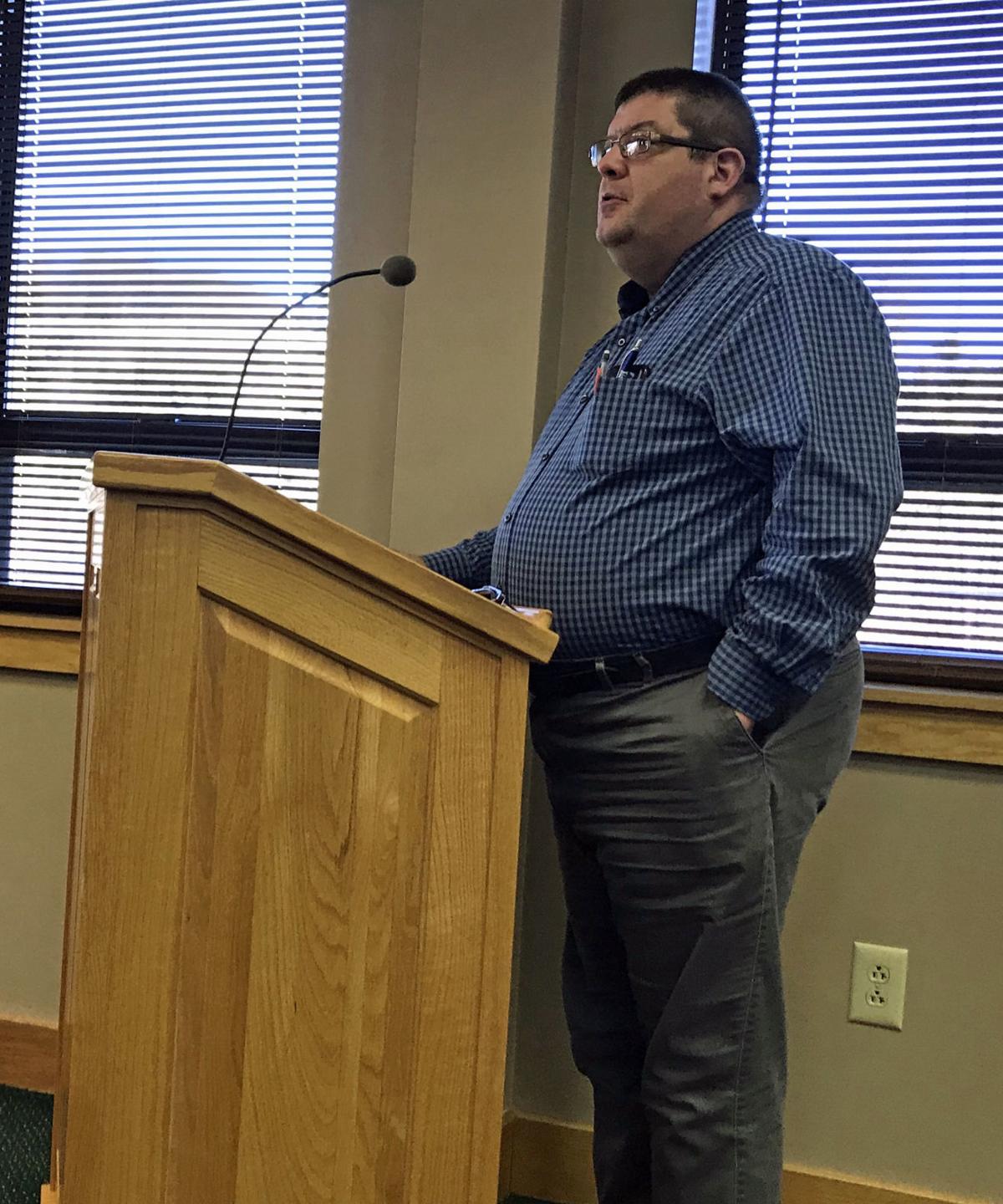 Tony Cook, EMS Program Coordinator at Mayland Community College, addressed the Board of Commissioners requesting the donation of a surplus ambulance from the county to help train emergency vehicle drivers through its courses of study. The board approved the gifting of a reserve 2011 Chevrolet ambulance for the program.

Tony Cook, EMS Program Coordinator at Mayland Community College, addressed the Board of Commissioners requesting the donation of a surplus ambulance from the county to help train emergency vehicle drivers through its courses of study. The board approved the gifting of a reserve 2011 Chevrolet ambulance for the program.

NEWLAND — A pair of longtime county employees were recognized at the Jan. 6 meeting of Avery County Commissioners who accumulated 83 combined years of service in law enforcement.

Avery County Sheriff’s Office Chief Jailer Trina Cook, as well as Chief Deputy Troy Cook, were each honored on the occasion of their retirements with the reading of a resolution for the declaration of service sidearm presented by Sheriff Kevin Frye. The pair also received a badge for their more than four decades each of employment in law enforcement, which was greeted with a standing ovation by those in attendance at the meeting.

“Forty-two years of service for Trina and 41 years for Troy Cook. I am replacing 43 years of service at one whack with two people retiring. They’ve been a real bright and shining star for Avery County, both in their respective positions,” Frye said during the presentation. “Each has saved the county tons of money, and have brought in tons of money just by keeping up with everything, doing the things they do. They are true public servants, and I’m going to miss them greatly in the positions they have been in. They have done a great job for Avery County. I couldn’t have been near the sheriff that I’ve been without them being there to help me along the way.”

The board also heard a request from Mayland Community College EMS Program Coordinator Tony Cook, who explained that the program at the college is in need of an ambulance, as the state now requires an Emergency Vehicle Driver course for EMT’s, and is greatly needed in all levels of certifications.

Cook cited information from the North Carolina State Office of EMS, who noted that results from four classes held across the state indicated that students “did not know how to properly check the trucks, inadequate driving skills, and not being able to perform skills in the back of the truck.” Cook added that MCC possessing an ambulance for training purposes would help financially to give the program the opportunity to set up classrooms, as well as give students a greater learning opportunity for real-life scenarios within the world in which they will work.

The board discussed its current fleet of ambulances, noting that the county has four ambulances currently in service, plus two in reserve, one of which is a 2011 Chevrolet ambulance with 161,000 miles that has had its chassis remounted three times, County Manager Phillip Barrier noted.

“The only other option for that ambulance would be to sell it as surplus property, and I think it’d be stupid to sell it if they could use it,” Commissioner Woodie Young said during discussion. “If there’s a need for it, I think we should fill that need.”

Following an additional brief discussion period, the board unanimously moved to convey the property on condition that the vehicle be used for class training, noting if the vehicle ceases to be used for the purpose it would revert back to the county.

Avery County Transportation Director Debbie Smith presented information to commissioners about the Rural Operating Assistance Program, R.O.A.P. for short, which is an annual state-funded, formula-based grant which is administered by the NC Department of Transportation for operating costs of passenger trips for counties within the state.

Smith explained that the funding had been delayed due to the delay in the state budgeting process, but that the county is to receive a funding increase of a little greater than $19,000 from last year, equaling a total amount of funding for the 2020 fiscal year of $131,546 for the program.

Smith noted that R.O.A.P. covers elderly and disabled trips, some employment trips, as well as veterans and some members of the general public. Smith concluded by requesting that the board approve a certified statement for Fiscal Year 2020, which was so moved unanimously.

Smith also informed commissioners that the Transportation Advisory Board is holding a retreat at the County Agricultural Building beginning at 10 a.m. on Jan. 23.

In other news and notes:

Avery County Commissioners will hold a special meeting at 6 p.m. on Thursday, Jan. 9, at the County Agricultural Building. The board’s next regularly scheduled monthly meeting will take place at 3:30 p.m. on Monday, Feb. 3, at the Commissioners Boardroom in the County Administrative Building.

Bernstein: McConnell's strategy is to wear out senators